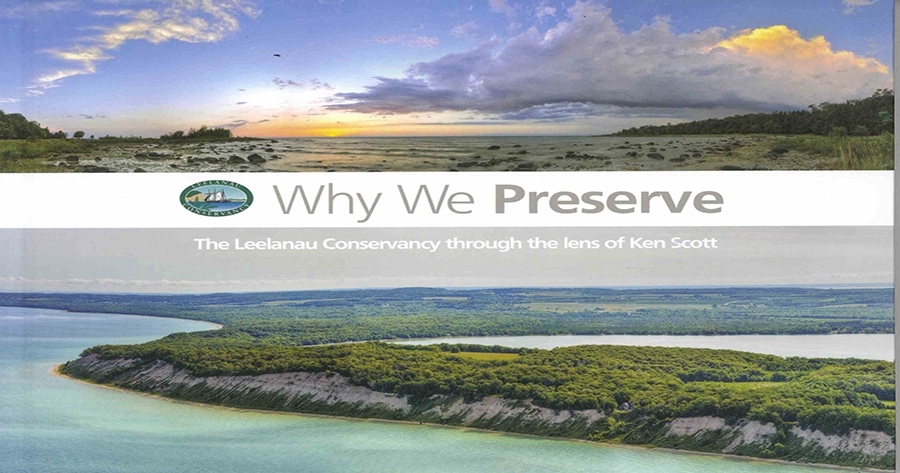 LEELANAU COUNTY: Working with iconic Leelanau photographer Ken Scott, the Leelanau Conservancy has published a book of photos and essays about the lands that the Leelanau Conservancy has protected over the last 27 years. The 56-page book, titled “Why We Preserve” features 52 stunning color photographs and seven essays by a cache of writers including renowned chef Mario Batali, CBS Sunday Morning News correspondent Martha Teichner and Traverse, Northern Michigan’s Magazine publisher Deborah Wyatt Fellows.

“Putting this book together was a joy,” says Executive Director, Tom Nelson, whose essay opens the book. “Ken’s photos are simply beautiful, and each one captures the essence of these places that are so spectacular. When you look at the book as a whole, and all of the places that have been forever protected by the Leelanau Conservancy, well, it’s breathtaking.”

Scott shot hundreds of images over two years in all seasons. He spent time photographing at Conservancy protected lands, including natural areas that are open to the public, and privately owned conservation easements. “The Conservancy protects these primo pieces of land, which are just packed with so much beauty and diversity-truly a photographer’s dream,” says Scott. “I loved working on this project and getting to spend time in so many spectacular places.”

A committee spent hours reviewing the photos in order to select images for the book as well as for an exhibit at the Dennos Museum which took place last fall. Twenty of the framed photos that were featured in the exhibit, can be seen at the Conservancy office in Leland (105 N. First Street).

In addition to the seven essays, each property features a short description that sums up why the Leelanau Conservancy thought the land was critical to preserve. “We couldn’t have made this book happen without Barbara Siepker, former Board member and longtime Conservancy volunteer. She runs a non-profit publishing group called Leelanau Press,” added Nelson. “She guided us every step of the way.”

The book retails for $25 plus tax, and may be purchased at the Conservancy’s Annual Picnic on August 6th, at the office of the Leelanau Conservancy at 105 N. First Street in Leland or by calling 231-256-9665.