Keep an Eye on the Sky: Stargazing in Northern Michigan

Looking for a family experience that’s out of this world? Turn your eye to the sky!

The Besser Museum celebrated its 50th anniversary in 2016, and new technology in its full dome planetarium allows for ‘dome-casting,’ which is connecting to other digital planetariums around the world and streaming their programming into this northern Michigan planetarium. Sky Theater shows run Tuesday through Friday and also on Saturday; check the site for start times and program details.

Located on Lake Superior State University’s campus in Sault Ste. Marie, this planetarium is generally available for student groups, scout troops, community organizations and private groups by appointment, according to Christopher Heth, a professor in LSSU’s school of physical sciences.

“With that said, we are very happy to work to schedule a show for a day and time that will work for anyone interested, including evenings or weekends when desired or necessary,” Heth says.

Aside from their star projections on their 15-foot diameter dome, the Benjamin H. Long Planetarium’s show also features video programming on topics including light pollution, the development of the telescope, the dangers of our sun to modern communication technology, and images of objects which can be found in deep space.

Located in Marquette, the Shiras Planetarium offers public showings as well as private rental of the theater space and a selection of programs for visiting school groups. As the planetarium undergoes several major upgrades, community shows are on a temporary hiatus as of summer 2017; visit the site for details and updates.

“Born from funding from the National Defense Act in the Cold War era, we have been maintained by the continuous support of the Marquette community,” Director Rachel Pomeroy says. “Although many things have changed in 50 years, our mission has not: bringing the wonder of space and astronomy to students and the community. This mission was once widely acknowledged to be a matter of national security, because of the space race.”

Located about five miles south of Northwestern Michigan College’s campus in Traverse City, students from the NMC Astronomy Club and the Grand Traverse Astronomical Society host public viewing nights the first Friday of each month from 9 p.m. to 11 p.m. Admission is $2 per person or $5 per family.

“The NMC Observatory stands as an example of this area’s commitment to education,” NMC Science and Math instructor Jerry Dobek says. “It was completely constructed without college or taxpayer funds. The property, the building and almost all the equipment came from donations–including the labor to build the facility.”

“The Lanphier Observatory is unique because it is … in the middle of the Sleeping Bear Dunes National Lakeshore, voted one of the most beautiful places in America,” Director Norm Wheeler says. “We have a dark sky free of light pollution and stunning views of the Manitou Islands and Dunes.”

The Headlands International Dark Sky Park, located two miles west of Mackinaw City, is open 24 hours a day, every day, at no charge. This facility also offers weekend guided tours of the night sky throughout July. The Headlands is Michigan’s only internationally-designated dark sky place—it was named one of three best stargazing places in the United States by National Geographic—and in June 2017 the park opened a beautiful waterfront event center and observatory. Features of this new facility include: rentable interior and patio space for private events and programs; a fully licensed kitchen and ADA restrooms; indoor/outdoor fireplace; and outdoor seating area located on the Lake Michigan side of the building, remaining open to the public at all times. The Guesthouse at the Headlands is also available for rent. This  is a large home on the property, about a half-mile from the Waterfront Event Center, that accommodates up to 20 guests overnight.

“There are great dark skies in many places throughout Michigan, but in Emmet County we have taken the step to formally steward and protect our dark skies by submitting to the rigorous process of application for designation by the International Dark Sky Association based in Tucson, Arizona,” Program Director Mary Adams explains. “When we achieved designation in May of 2011, we were only the sixth such park in the U.S. and only the ninth in the world! There are now over 20 such parks in the world, and we are part of the leadership helping to make this happen.” 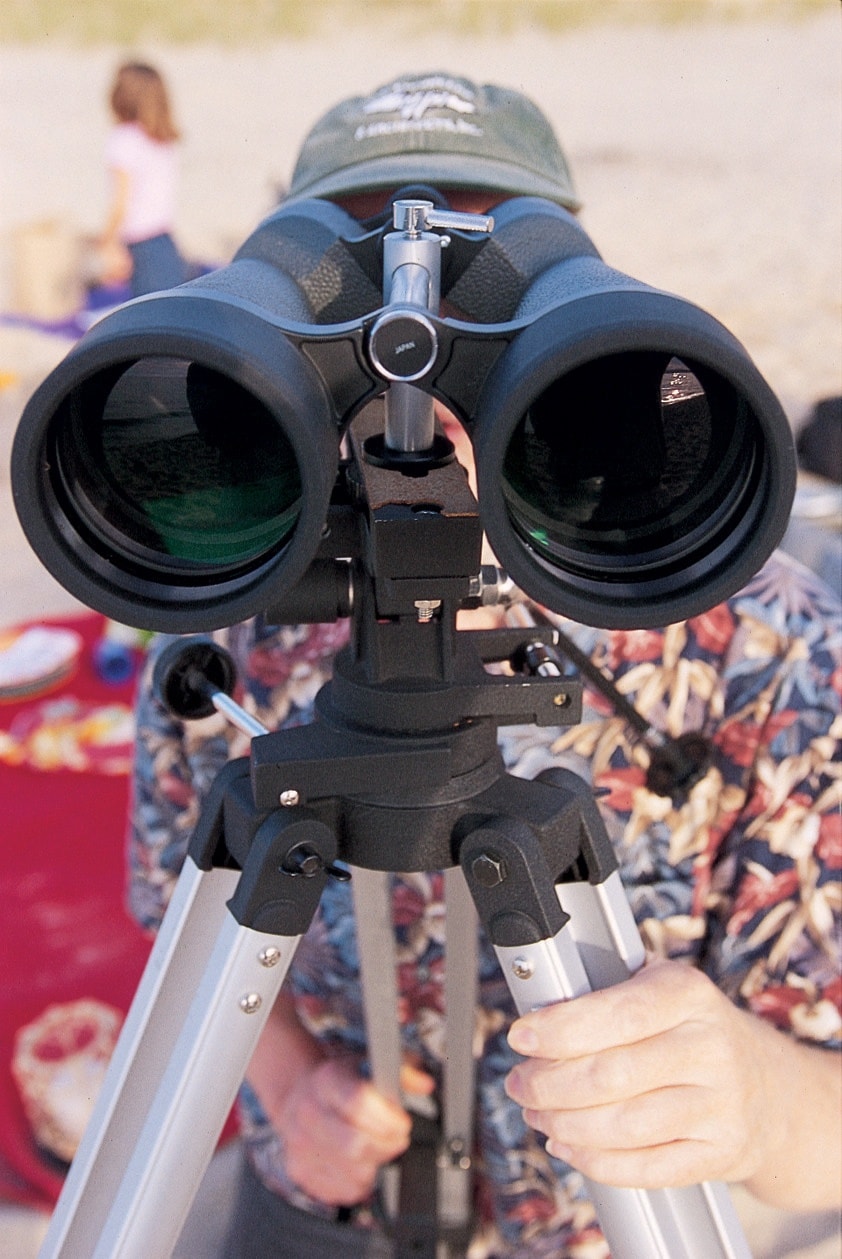 We asked astronomy experts in Northern Michigan to help us navigate the night sky.

“The stars are tucked in behind nearly every great achievement in the history of humanity. Fairy tales, nursery rhymes, master works of art, planting—you name it, you can find its connection to what’s arcing in the sky overhead.” –Headlands International Dark Sky Park Program Director Mary Adams.

The Big Dipper can be found nearly straight up and slightly to the northwest. It’s part of the larger constellation Ursa Major, the Big Bear. From the Big Dipper, you can practice “constellation hopping”—the dipper’s handle appears to arc, and if you follow it, you’ll find Arcturus, the bright star in the constellation Bootes. From Arcturus, you can speed onto the Spica, a star in the region of Virgo the maiden. Arcturus and Spica are bright stars, so this is an activity that can be done earlier in the evening, making it ideal for kids.

If you follow the line formed by the two end stars of the Big Dipper’s cup to the next bright star, you’ll find Polaris, the North Star. Polaris is not a very bright star, but it marks the direction north and forms the end of the handle of the Little Dipper. The Little Dipper is part of the constellation Ursa Minor known as the Little Bear.

Another favorite is the Summer Triangle. The triangle is made up of three bright stars that show up early in the east. The stars are from three different constellations: Deneb is in Cygnus the Swan, Vega in Lyra the harp, and Altair in Aquila the Eagle. The best thing is that the constellation Cygnus the Swan appears to fly toward the center of the triangle, and this is the region where the Milky Way—the hazy band of pooled light from our billions of stellar neighbors—shows up.

What can you see without a telescope?
The darkened evening or morning sky is ideal for seeing satellites, which can be seen on clear nights. They look like slow moving stars. One bright satellite that is particularly fun to see—because there are astronauts on board—is the International Space Station.

An especially spectacular sight in the night sky is the Aurora Borealis, or Northern Lights. The Northern Lights can be observed a day or two following solar magnetic storms, which eject waves of high-energy particles into space. These elusive curtains of light, usually green in color, appear in the northern sky and can shift and “dance.” 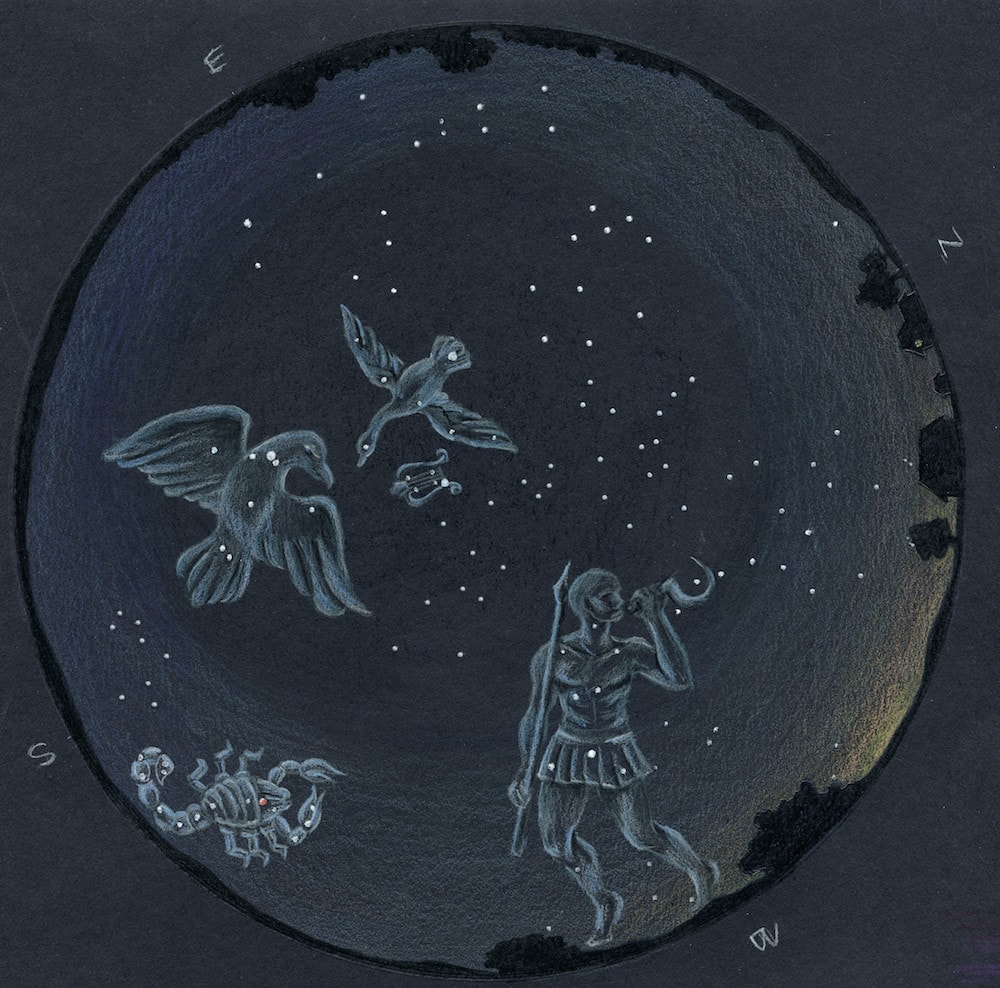