All photos by Beth Price. 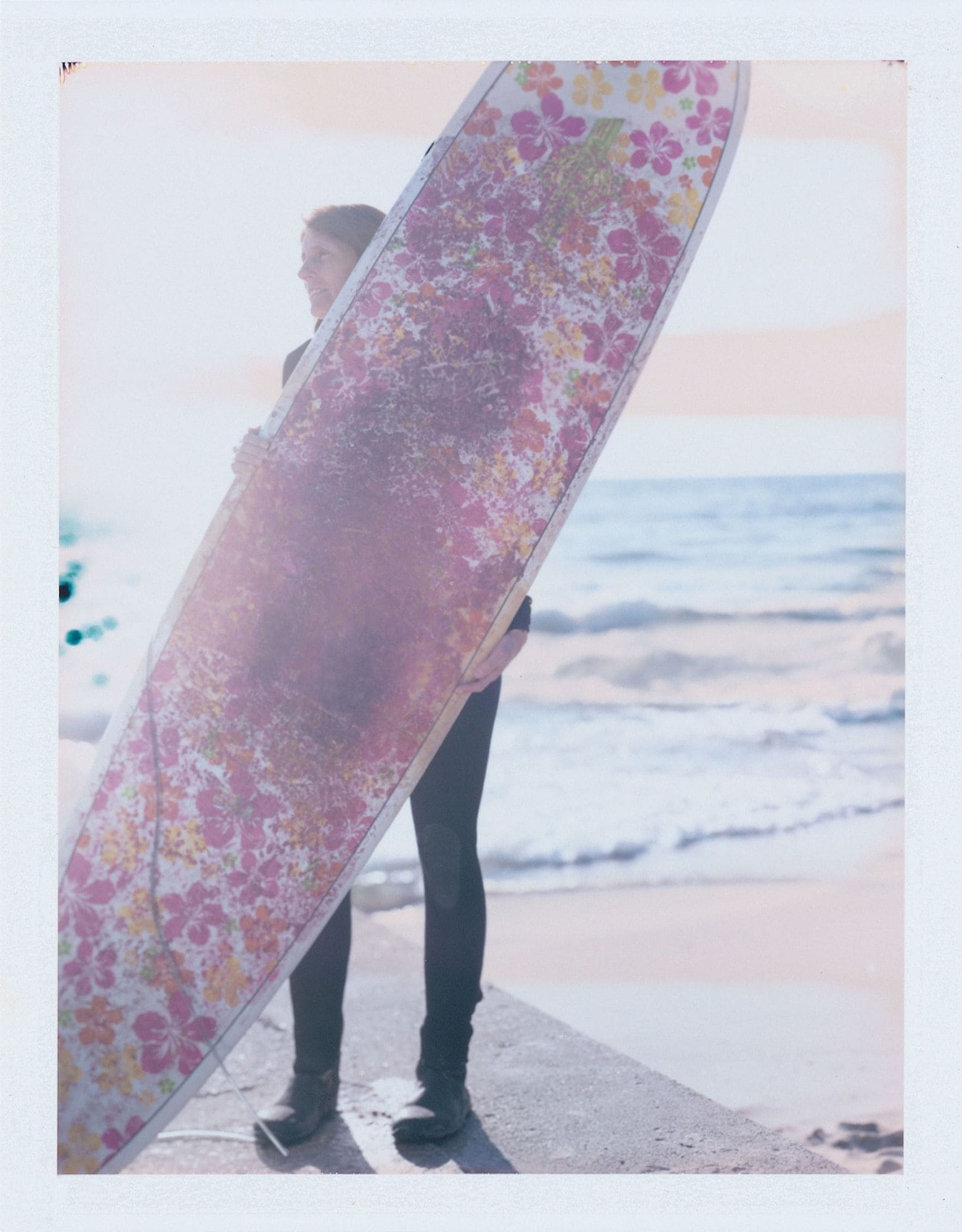 Water is an integral part of Lori Darling’s life. If she’s not physically immersed in it—surfing, swimming, kayaking, canoeing—she’s running or biking alongside the Lake Michigan shoreline near her home in Frankfort. “Sometimes in the middle of the day, I’ll just go down there because it makes my day better,” says Darling, 51, a physical therapist and mother of four boys. “When I go to the lake, I call it soul food. It feeds my being, who I am. It fills me.” Surfing is especially important to her, and she’ll head out even when her window of opportunity is small. “I will surf during lunch. My slogan is, ‘If I can just get one wave, it makes the whole thing worth it.’” She began surfing in 2005, not long after her husband, Jay, gave it a try during a trip to Hawaii. Back home, they realized Frankfort’s “break” was ideal for freshwater surfing. “I just fell in love with it,” she says. Their boys, now ranging in age from 13 to 22, took to the sport as well. It’s a lifestyle, she says—and also a refuge. “I used to sit on the beach and watch people surf in Hawaii, and I used to feel sorry for them when there weren’t any waves coming. But once I started surfing myself, I realized that that is part of the fun. It is amazing to be on the water and part of the water. Sometimes, especially when I paddle out, I will just sit on my board and let waves go by, just because it feels good to be there bobbing on the water.” 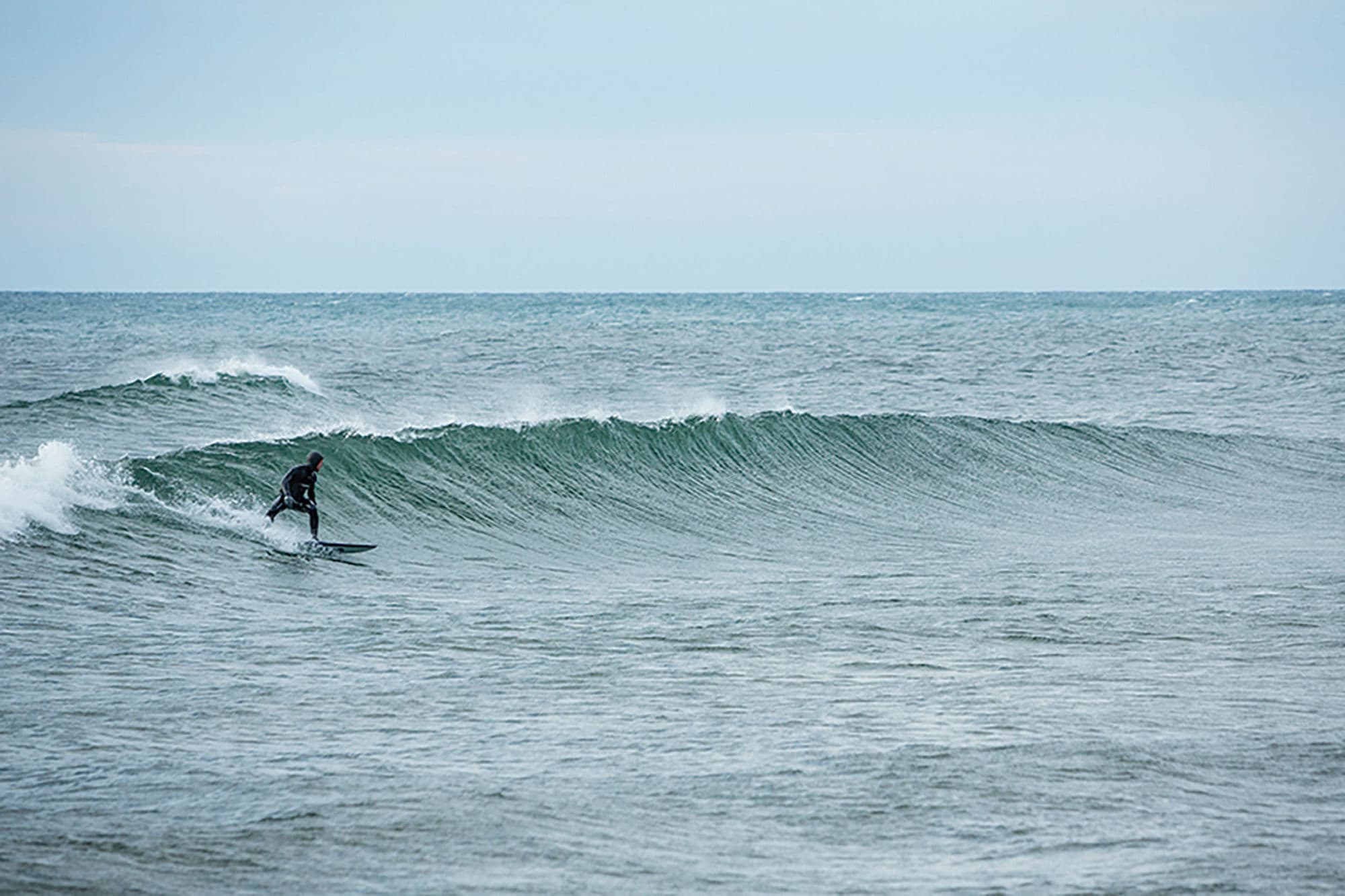 Rod Robertson had what he describes as “a really solid background in skateboarding and snowboarding.” Perfect for a wannabe surfer, right? Not exactly. “I went into it pretty cocky, this will be a piece of cake,” recalls Robertson of his first attempt in Lake Michigan in 2006. “But what got me was there is so much arm strength needed to get through the waves. And to catch a wave is tough.” By the time the perfect wave appeared on that overcast and windy mid-summer afternoon, he found he could hardly get to his feet. Still, something clicked. “From the first time I went out, I was hooked.” Now 32, the Empire native is a surfing instructor, dividing his time between Sleeping Bear Surf & Kayak in the summer and Puntas Surf School in Puerto Rico between November and May. Ocean surfing is a beautiful experience, but freshwater surfing has its own rewards, says Robertson, who counts Van’s Beach in Leland as one of his top surfing spots. The biggest waves, 6- to 7-feet-high—may only come a few times a year on the Great Lakes, often in the fall when wet suits are an absolute. But smaller waves are just as meaningful. No matter the conditions, being out on the water, surrounded by gorgeous scenery, “is pretty magical,” he says. “You definitely never surf the same way twice, which keeps it interesting. You can go to Frankfort beach and every day you’ll see a different beach.” 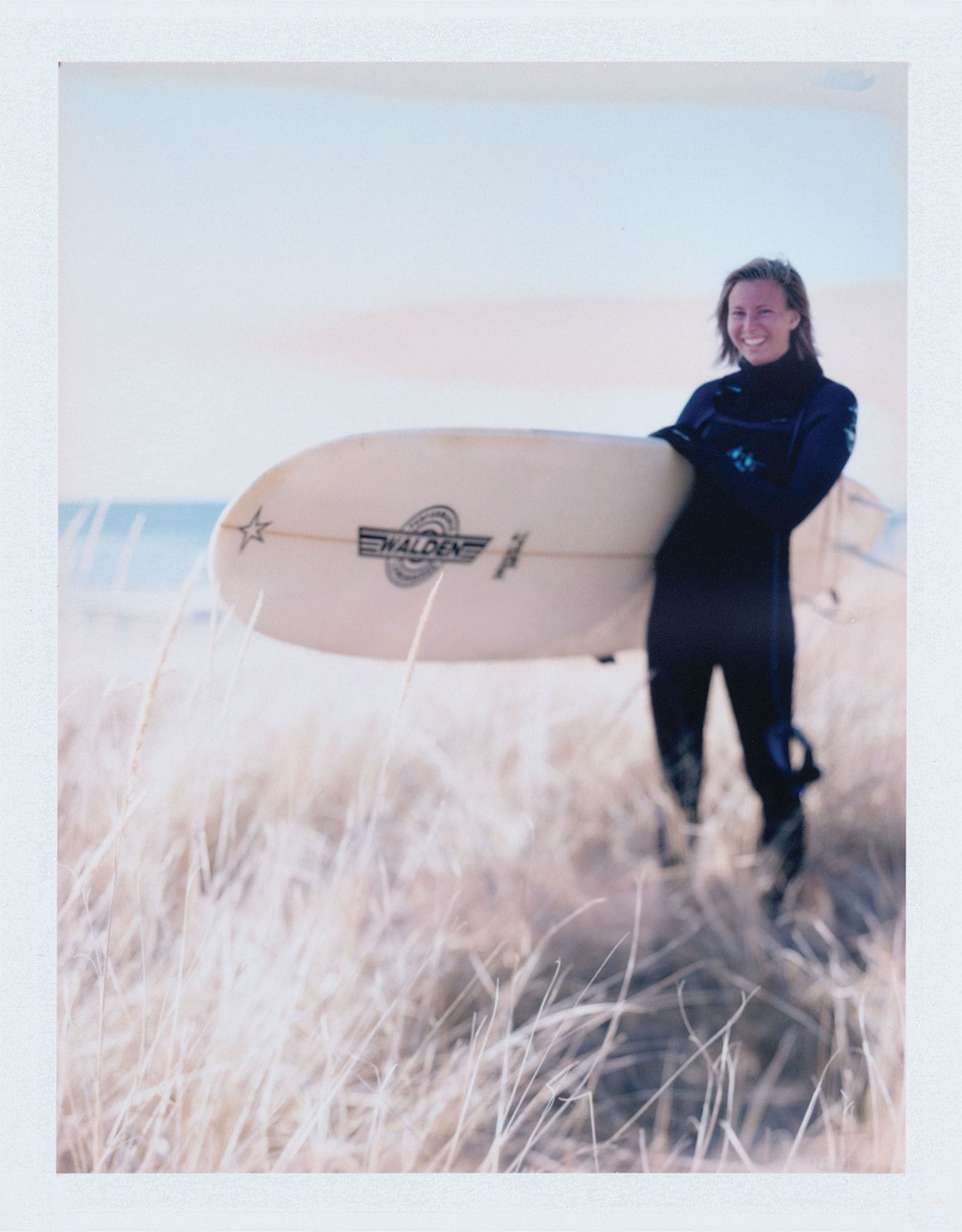 Christmas Day, 2014. Cold—ice cold, Ella Skrocki remembers—and yet she and fellow big lake lover Jake Therrien made the trek from Empire to Frankfort to play in the winter waves. Skrocki, 20 and a surfer since age 9, remembers slipping on wet suits, jumping off the icy pier, and being treated to beautiful, overhead waves coming in off the elbow as the setting sun created a colorful mosaic above the horizon. “I had one of the most stellar rides of my life, and got to share it with one of my favorite people on the planet. Talk about the most amazing Christmas gift.” Skrocki, who spent much of her life at her grandmother’s home next to Sleeping Bear Dunes and on the shores of Lake Michigan, has memories of “getting pushed into rollers on wavy days atop our old, massive windsurfing board.” She credits her outdoors-loving parents with introducing her to the sport. In 2004 the family opened Sleeping Bear Surf & Kayak, where Skrocki had her first official lesson. As a teen, surfing took on more significance. “I made sure that my 7’6” Surf Betty and I were included in the ‘big kid’ dawn patrol sessions when the wind would howl at me the night before.” From there she took a leap and tried surfing as the weather cooled. “Nowadays, my passion for surfing gets me in the water during Northern Michigan blizzards, when people recommend staying indoors by the fire to avoid frostbite.” It’s also led her further north—to Northern Michigan University in Marquette, where she rides Lake Superior swells. “Being in the water with my board, either paddling, sitting and watching the waves, taking a drop or cruising down the line of a wave, brings me the greatest, most inexplicable joy. Many surfers will describe it as the stoke, but I believe it to be much more than that. It brings me into a state of meditation—a trance—where I can feel free from all ties on land. Where time ceases to be a virtue, and where I can just merely be.” 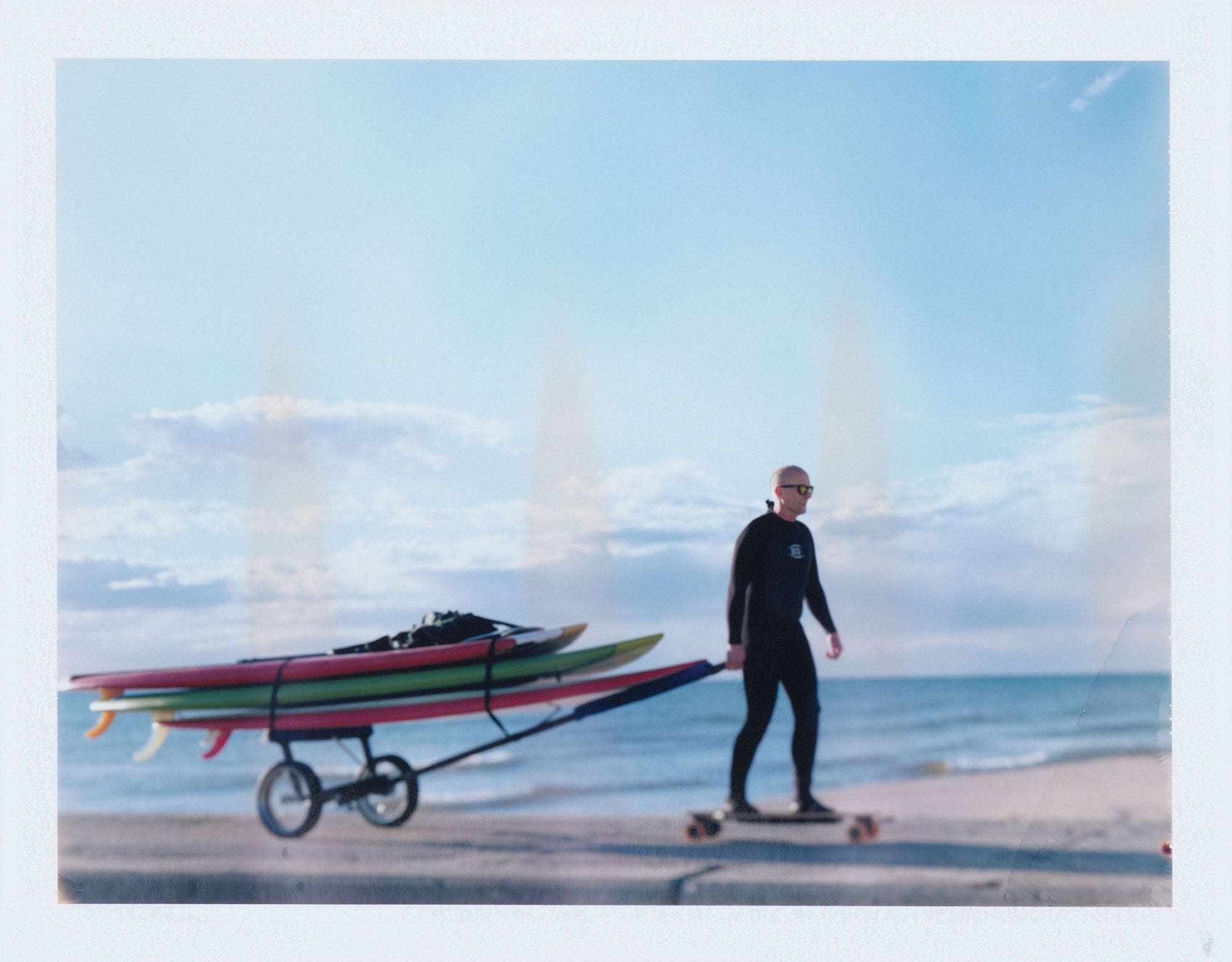 For Larry Bordine, growing up in California meant surfing was a given. He fell away from it for a while when he was older, but picked it back up again, this time in freshwater. “There was a small tribe of people who were doing it,” Bordine says of the then not-so-well-known Frankfort surf scene about 15 years ago. He remembers a day in ’01. “We were surfing in Frankfort, triple overhead waves, a very good day.” He and his fellow surfers decided to enjoy post-ride noshing at a local pizza place. “People wondered why we had surfboards on the top of our cars. They said, ‘You can’t surf in Frankfort,’ and we said, ‘You should have told us this at two o’clock. We’ve been surfing all afternoon.’” Bordine and his family opened Beachnut Surf Shop in Frankfort in 2010 after Bordine’s engineering expertise led him to create boards he believed were best for freshwater waves. His family lives in Traverse City—Bordine has an engineering position there—but come summer they’re at the surf shop or their nearby cottage as much as possible. With its angled shoreline and favorable position with regard to wind direction, Frankfort is one of the best spots along the Great Lakes for surfing, and for this, Bordine is grateful. “What really stokes me the most is when it’s least expected. You go out there just because, and the forecast doesn’t look that good. You get there and no one else is there, and then for whatever reason it turns into an epic day.” You can’t beat the summer weather, either. “From the middle of June to the middle of September, it’s almost identical to Maui.”

Riding swells in between classes at Northern Michigan University was the norm for Nick Brown and his friends. “I went out once or twice on borrowed boards and I was immediately hooked,” he remembers. “I bought my first board from a local shaper named Brent Centracco of Chopstix Surfboards.” Brown, a Leland native who now lives in Grand Rapids and is a law student at Thomas Cooley Law School, calls Marquette the ultimate place to learn the sport. “You can surf every wind direction within a two-hour drive, and Lake Superior produces rideable waves a lot more often than the other Great Lakes.” During peak surfing in fall and winter he and pals would ride four or five times a week, sometimes even seven. These days, when he’s back home in northern lower Michigan, the 24-year-old most often rides near Leland and Frankfort. “Leland is super steep and punchy, while Frankfort can hold more size and gives you a longer, smoother ride generally.” Surfing, he says, provides the optimal way to get close to nature. “I’ve always been the type of person who feels most at home when I’m outside … I think the unforgiving weather that goes hand-and-hand with the waves here on the Great Lakes also makes it more challenging, and ultimately more enjoyable when everything finally lines up and you score a great day. Not to mention, it’s phenomenal exercise.” 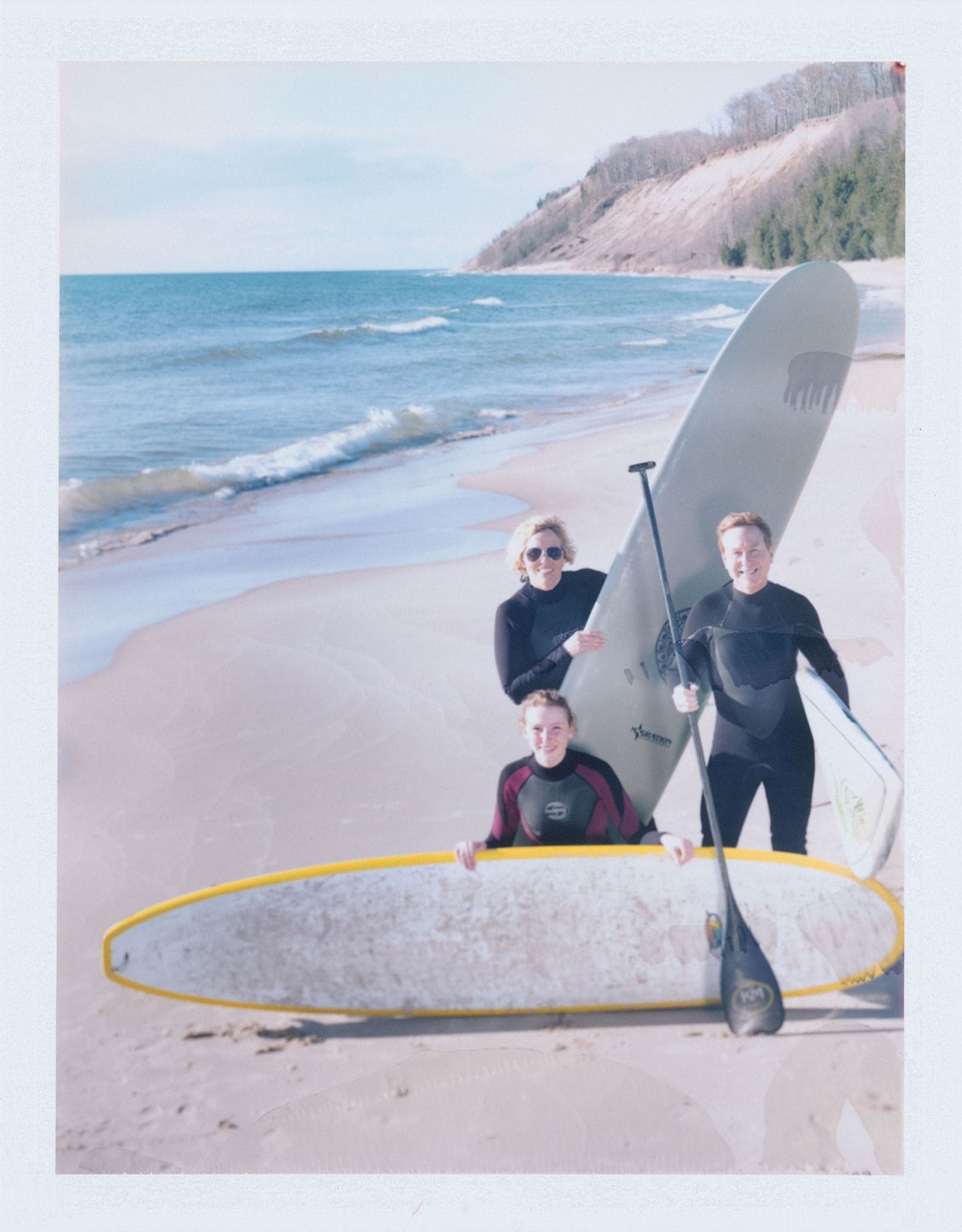 If the wind is blowing, as it was on a recent early spring afternoon, Janet Hessler, her husband, Jeff, and 14-year-old daughter, Annie, are on their boards. Water temps were in the 30s on this particular day, but the sun was shining, the breeze just right, and wetsuits kept the Frankfort family comfortable as they paddled in search of the next sweet swell. Janet Hessler, 49, began surfing five or six years ago, around the time she surprised Jeff with a birthday present he’d been thinking about since childhood. “He’s always had a fascination with surfing, and I bought him a surfboard—in a driving, horizontal snowstorm—from Crystal Lake Adventure Sports in Beulah,” she recalls. “I strapped it on top, took it home and told him, ‘Your birthday present is on top of the car.’” As Jeff mastered the board, Janet discovered she also had a passion for it. “The learning curve is pretty steep. But if you just work at it and work at it, you can get a little better … you walk out of the water and you feel spent. You feel like you’re expending the most incredible amount of energy, but you feel so invigorated, too.” Janet, who grew up out West near mountains, also realized a love for freshwater: “I have fallen in love with Lake Michigan. It’s a magical, magical place.” This appreciation has led the family, which owns Betsie Bay Furniture in downtown Frankfort, to do their part in helping protect the Great Lakes. The business has played host to events that raise awareness of freshwater conservation efforts. Janet hopes that the Northern Michigan surfing culture will be a source of empowerment and protection. “More than anything, what I would love is just that people are good stewards and that they understand how precious this resource is. We cannot take it for granted.”