The silvery grays and smoky taupes of water-weathered wood define the timeless style of this summer cottage on Sleeping Bear Bay.

This home is featured in the June 2015 issue of Northern Home & Cottage, a bi-monthly home publication included in all subscriptions to Traverse, Northern Michigan’s Magazine. Subscribe! 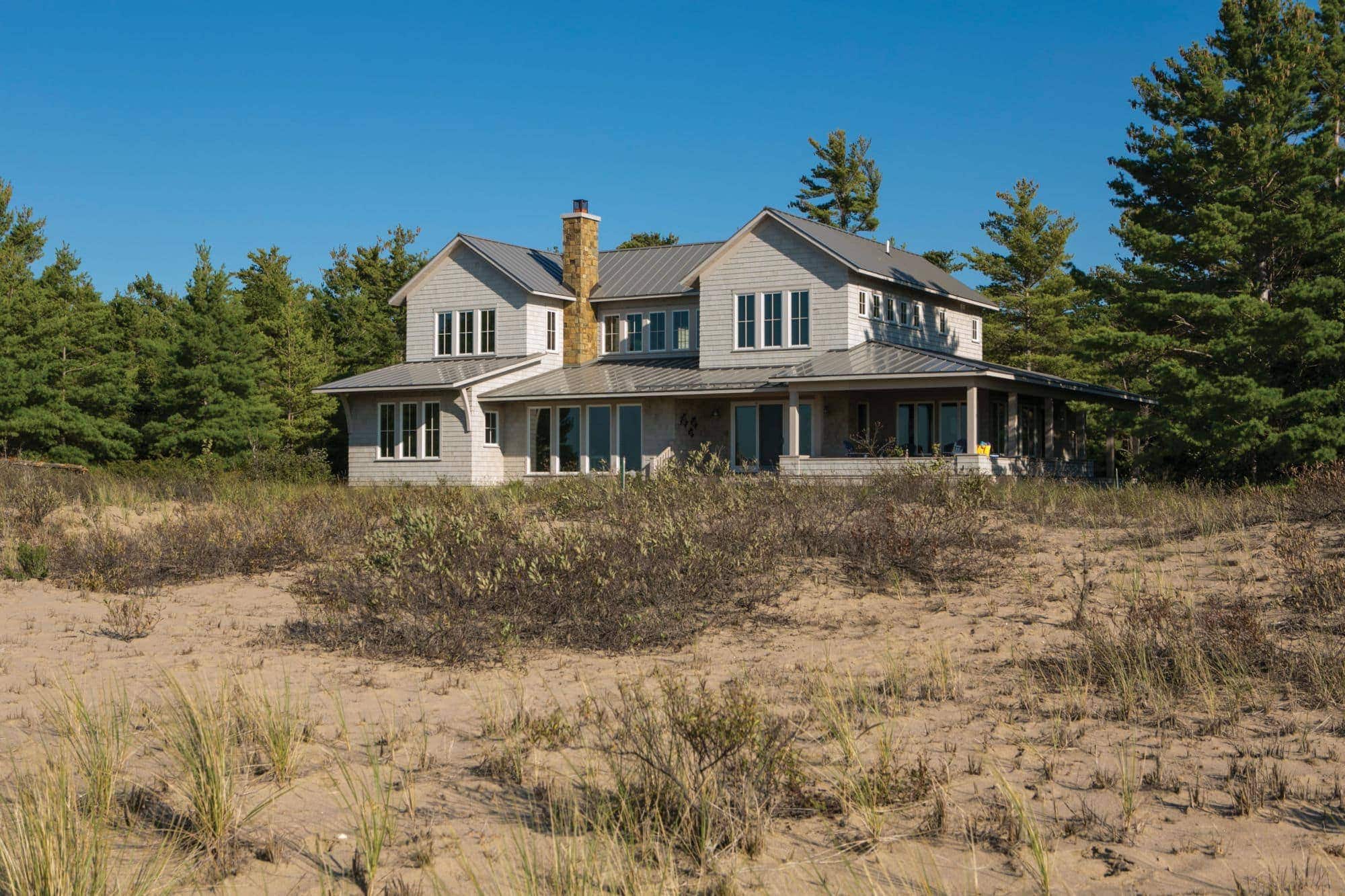 On a blue sky, blue water day near the end of last summer, three boys played together on the Lake Michigan beach in front of a lovely summer home. The scene from inside the home, through windows framed by white mullions, felt very much like a painting—William Merritt Chase’s 19th-century seaside works that capture the sublime coastal light, perhaps. Except of course, instead of starched period garb, these boys wore the bright neons of contemporary kids.

No doubt, the family who lives here is modern to the core, burdened with all of the crazy busyness that accompanies modern life—careers, school, extra-curricular activities. But when the family arrives at this home on this slice of Sleeping Bear Bay, the bustle calms, thanks to the serene shore-side setting and a home perfectly suited to that setting. 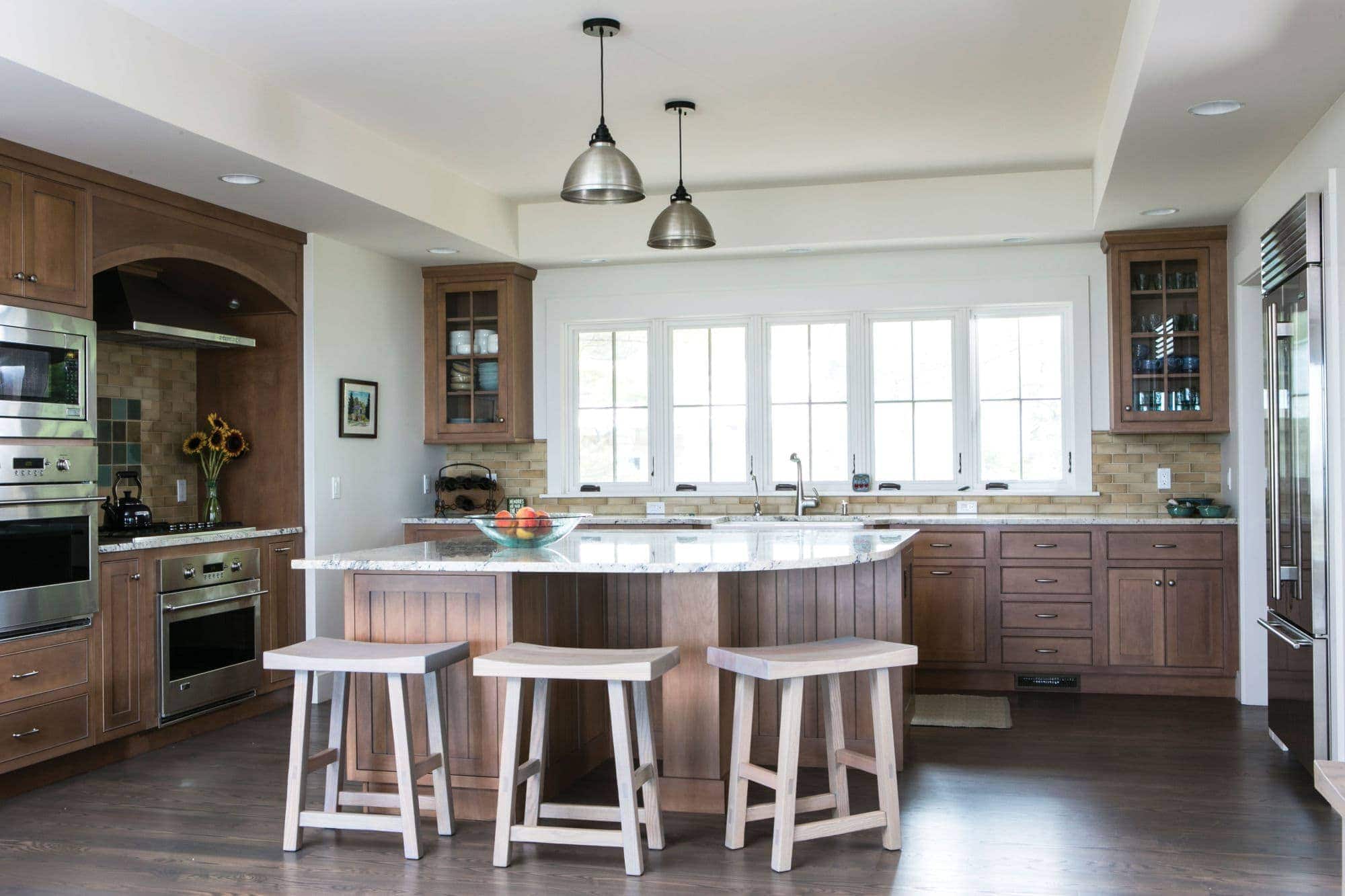 By the time the homeowners built their summer home, they knew the area well. They’d first visited the Sleeping Bear area on a tour of the Lake Michigan coast early in their marriage. “We knew right away, this was where we wanted to summer,” the homeowner says. When the opportunity arose, they bought a small house in the woods on the edge of Glen Arbor. They were so excited about moving in, the homeowner remembers, that they showed up at their new house, car and U-Haul loaded to the hilt, before the former owners had completely vacated.

The family had many, many happy summers in that house. And then one day they noticed a for sale sign on an older beach house down the road. It was their chance to live not just near the beach, but to live on it. They purchased the property and made plans to take down the old home and rebuild. 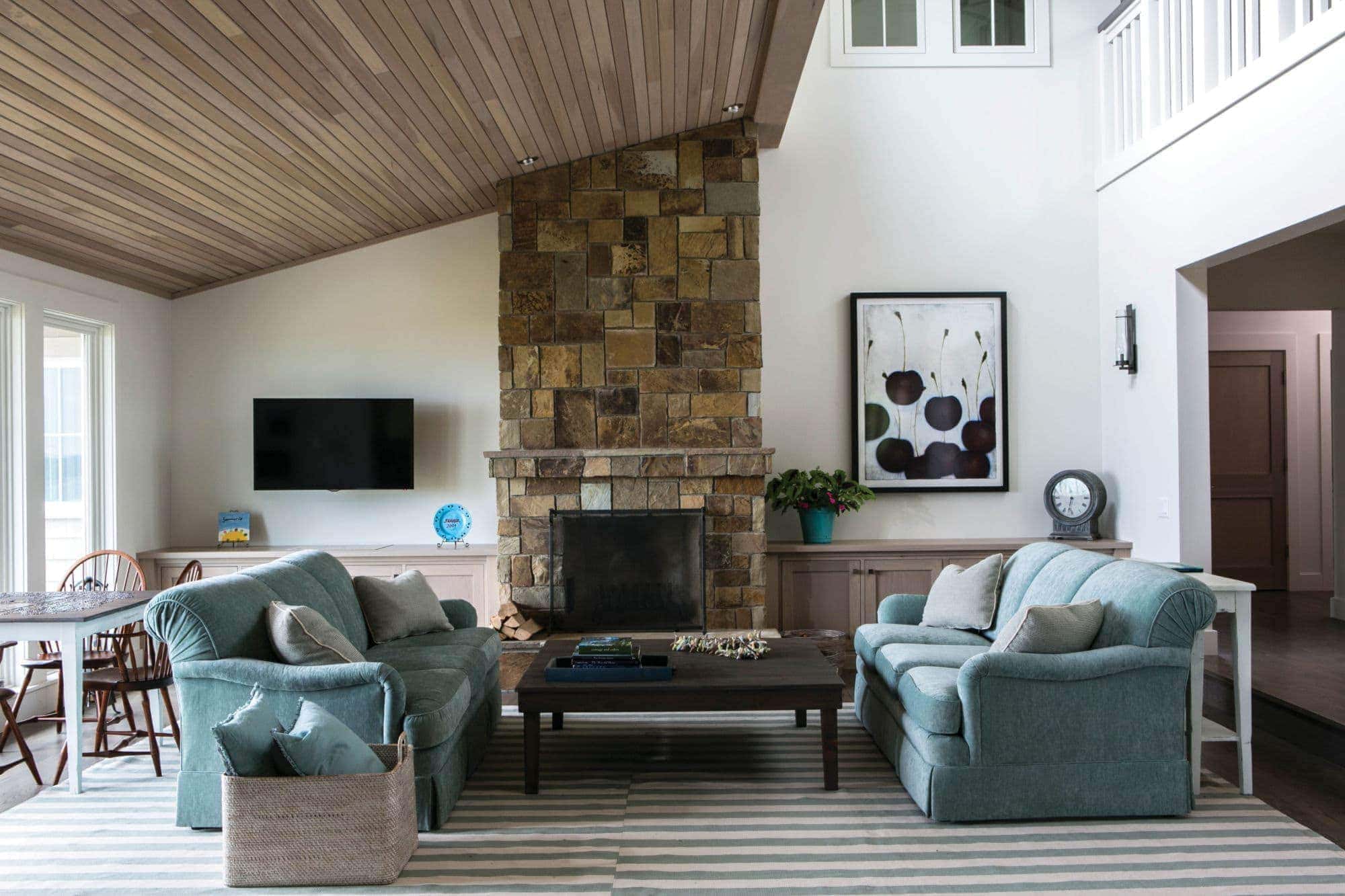 When she first began picturing what their new summer home would look like, the homeowner says she kept imagining driftwood—the soft silvery tones, the way it looks like it has been set on the beach forever. She pored through home magazines looking for photos of homes with that feeling and eventually decided the old summer homes of Nantucket, with their historic architectural sensibilities and earthy coastal palettes, best described what she was looking for.

Architect Suzannah Tobin gave shape to the homeowners’ ideas, designing a home nestled in a grove of pine trees, a bit back from the beach. “Zoning would have allowed them to build closer to the water, but the unwritten rule [of designing beach houses] is that you don’t go past the tree line. It ruins the whole shoreline,” she says. 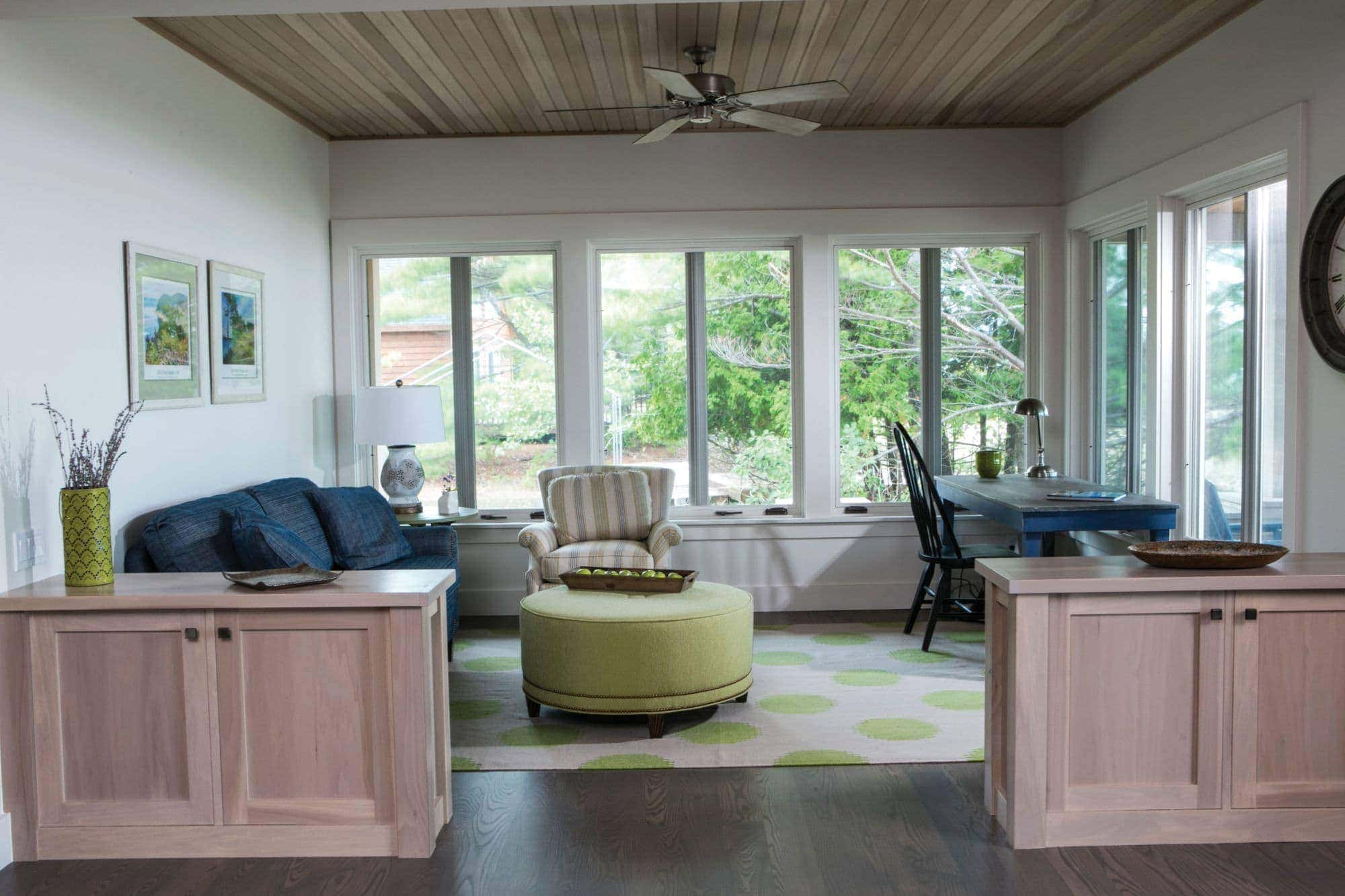 The two-gabled home measures 2,100 square feet, is long and narrow, and is situated to make the most of the lake breezes. Banks of four-paned divided light casement windows open to those breezes while giving a nod to a crisp, cottage style. Pulling on her own childhood growing up on Lake Michigan’s nearby West Grand Traverse Bay, where she recalls the heat of the sinking sun, Tobin added a deep, covered wraparound porch. Clad in cedar shake, the home indeed evokes the feeling of a 19th-century coastal home.

Tobin is particularly pleased with another nostalgic touch—keeping the garage separate from the house. “One of the best parts of arriving Up North is getting out of the car and smelling trees and instantly hearing the water. Even in the winter you can get out at night and look up at the stars,” she says. “Everything looks less suburban when the garage is not stuck on to the house,” Tobin adds. “But people usually don’t realize it until it is too late.” 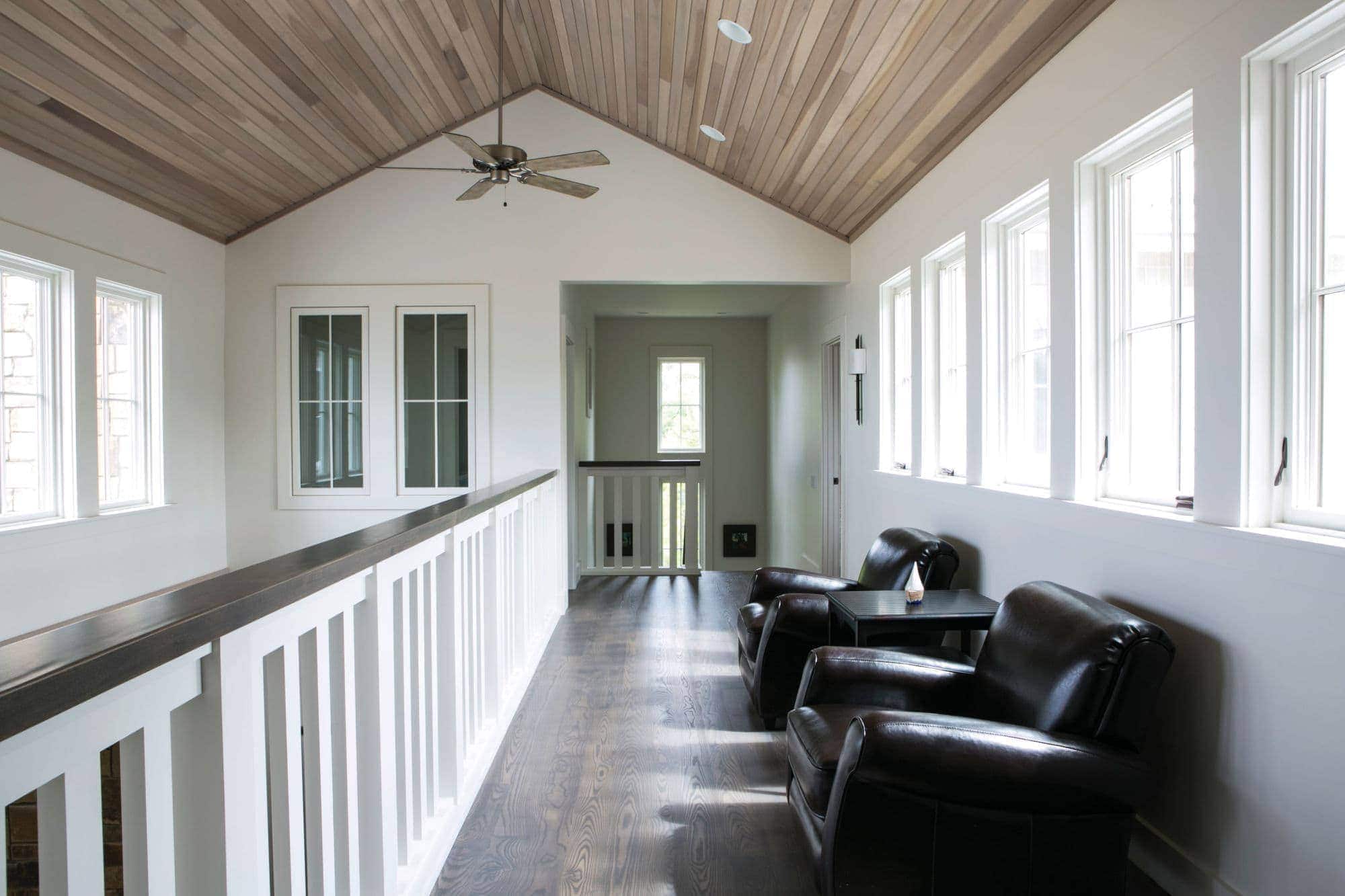 The homeowner credits builders Randy and Nadine Weirich of Heart Homes for turning the construction process into a labor of love. “They were so easy to work with,” she says. “They really cared. I’ve never seen a building site that was so clean in my entire life.”

It was the kind of creative, flawless collaboration that builds friendships. “They are the most wonderful people,” Nadine says of the homeowners. 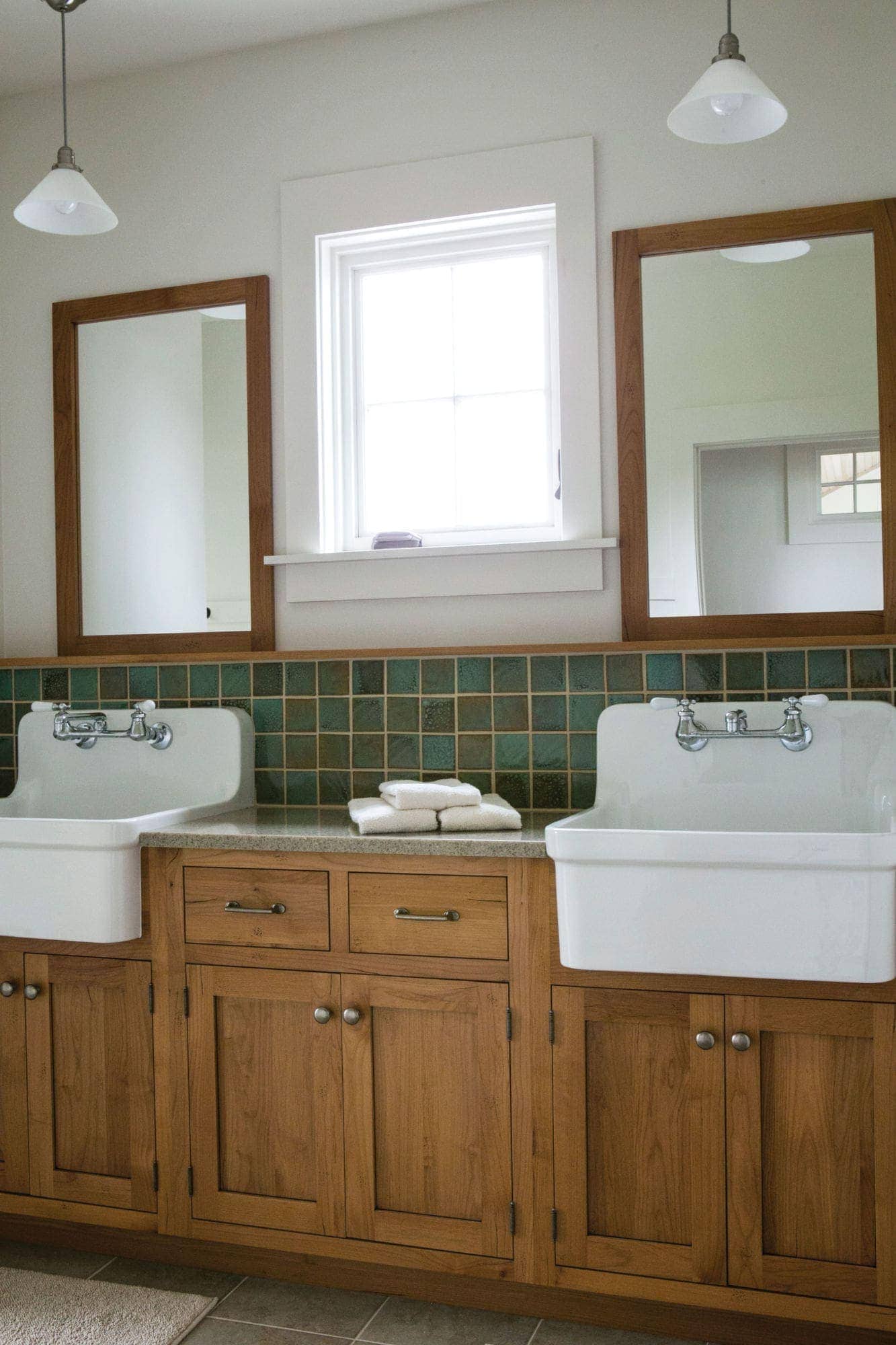 Finished now, the home has become the family’s haven from a busy world. They swim, fish, beachcomb … but often they just relax on the covered porch and take in the crescent sweep of the shoreline and where it ends at Sleeping Bear and Pyramid Points. Straight ahead, North and South Manitou islands float on the horizon. Freighters pass by. Deer amble down to the lake for a drink. It is as peaceful, beautiful and timeless as, well, driftwood comes to mind.