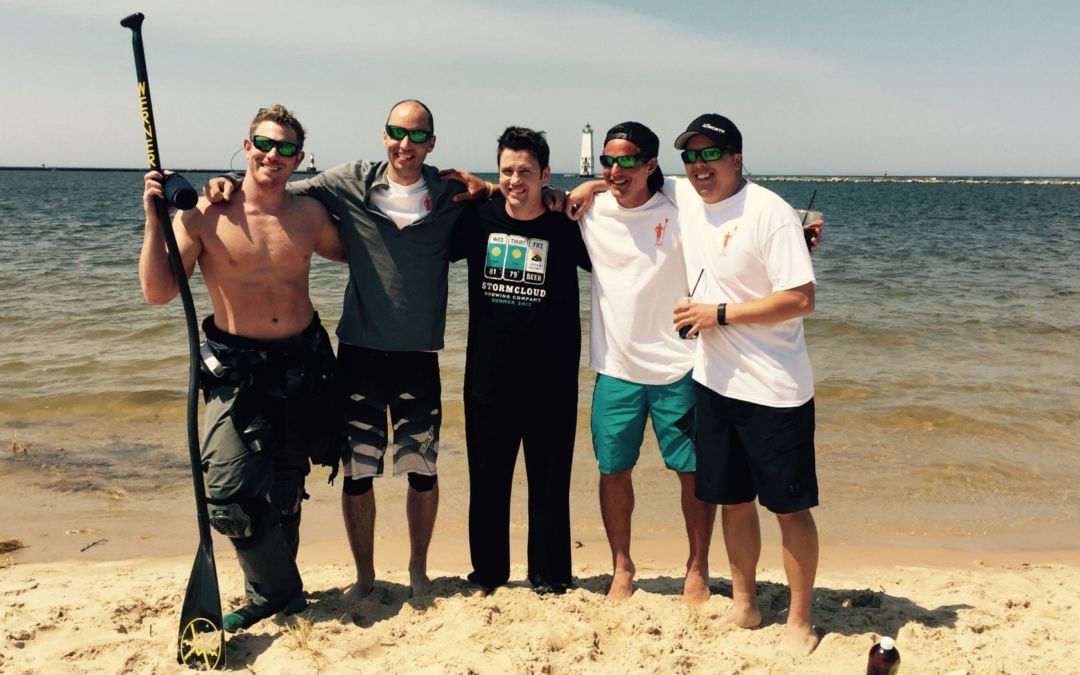 With the northern lights above them and 900 feet of water below, five friends from Traverse City battled the elements of Lake Michigan on a journey that Kwin Morris describes as “epically amazing.”

Kwin, Jeff Guy, Joe Lorenz, Joel Mueller and Nick Darga left the shores of Algoma, Wisconsin aboard 14-foot paddleboards at 10:30am on June 23. Their destination, Frankfort, Michigan, is 60 miles across the big lake. They arrived exhausted almost 24 hours later to cheers, tears and embraces from family and friends.

The journey began as an idea at a Christmas party and a desire to protect the Great Lakes. That only got the ball rolling and soon the idea became Stand Up for the Great Lakes. The group wanted to do more than paddling and decided to use their idea as a fundraiser for Alliance for the Great Lakes, the oldest organization working to protect and restore their beloved bodies of water. As of June 26, the guys were able to raise almost $8,000 for the charity.

The group also partnered with Ford Motor Company, which is creating a video of their voyage for their “Go Further” campaign. The preview will come out August 3. We talked with Kwin Morris, our Red Hot Best paddleboarder from the June 2015 issue of Traverse, Northern Michigan’s Magazine, about the adventure and the cause behind it.

What do you love about the Great Lakes?
I’m from the area, but I don’t think growing up you appreciate it. I was in it fishing, swimming, jet skiing and tubing all summer long. Then I moved away for college, and you just start missing that water. You don’t realize how much of an impact it has on you until you move away. There is nothing like (the Great Lakes) in the entire world, and we’re so lucky to have them. When you stand on the shore you can’t see the other side. It’s clean and fresh, and we just want to keep it that way.

What was the hardest part of the trip?
We knew waves were coming and we knew the wind wouldn’t be favorable the whole time, but it actually never went to a southwest wind like it was forecasted. Even when we were out there on the water it said it was a southwest wind, but we were getting east wind, which meant it was coming right at us. Then it switched to a south wind, which creates side chops. The last 10 hours we were battling 2,3, 4-foot waves coming at the side of us. We had to battle that for 10 miles. We could see shore, but it was tough.”

The part that I wasn’t prepared for as much was the cold. The temperature of the water was 37 degrees and the air was 41. We started off in Wisconsin and I had no shirt on. As we crept up to the middle of the lake and the sun was going down it dropped. We ended up not being able to take as long of breaks because we were so cold we had to keep moving.

How did you prepare yourself mentally?
I went on some road trips that were 24 hours. I drove 18 hours straight just to see if I could do it mentally, you know pushing yourself that way, but it was still tough.

What were you thinking when your friends and family met you on the shore?
That really got me. I was so emotional coming to the pier and seeing my family and friends on the beach. The mayor of Frankfort came down and thanked us, local businesses came; just seeing so many people who love the same things we do— I think all of us choked up.

Is there anything you want to share about your story?
If it was a solo thing none of us would have been able to do it. We all picked each other up and we all brought a little something special. The group— we just became brothers. 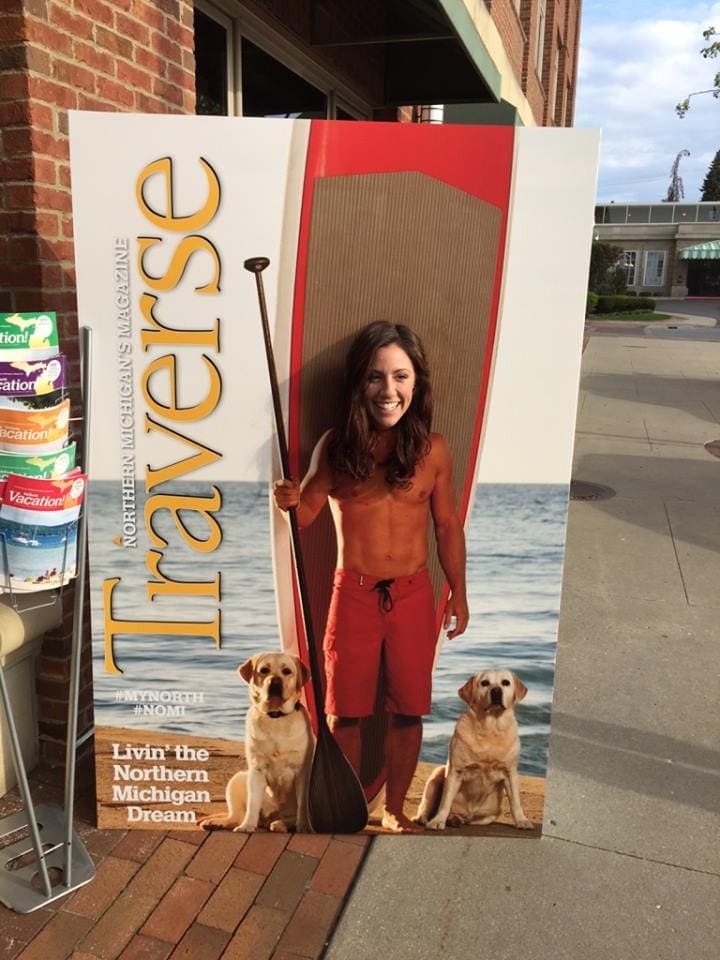 You may have seen Kwin out and about … or should we say his body? Kwin is Traverse Magazine’s 2015 Red Hot Best Paddleboarder. Look for his cutout at events this summer. He’s already been to the Leland Wine & Food Festival and will be making more appearances. Snap a picture with him while you can!

How does it feel to be our Red Hot Best paddleboarder?

“(My friends and I) have had a lot of laughs at that. I knew my picture was coming out with the Red Hot Best List but then someone tagged me in a post and said ‘Kwin isn’t that your bod?’ One of the guys from the paddle saw a cutout of me at the Leland Wine & Food Festival. It was just so funny.”

Video: How to Standup Paddle Board

Paddle Boarding in Northern Michigan: How it Changed My Mother’s Life