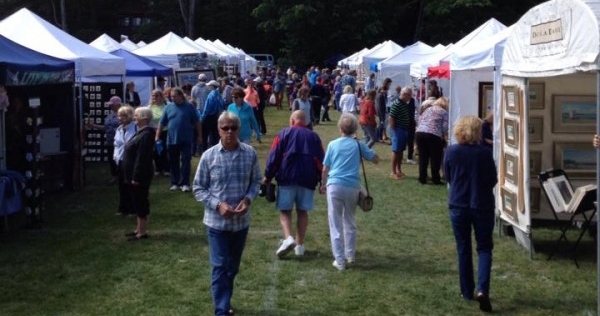 PILGRIM, MICHIGAN—For most of the year the ball field at the Congregational Summer Assembly (CSA), doesn’t see much action; in autumn, winter and spring, the grassy space along M-22 is dormant, with only deer, raccoons, chipmunks and other Michigan wildlife using it as a place to feed, play and tumble. But in summer, the green comes alive, and it serves as the hub of activity for CSA families. During the week children play everything from T-ball to soccer and tag, while on July 4th the ball field hosts the Bachelor vs. Married Men softball game, which has been a rite of summer for decades. The field also serves as overflow parking for things like church services on Sundays, concerts and operettas that take place throughout the summer, and for weddings and christenings that are held in the Meeting House just beyond it.

The ball field truly bustles, though, when people gather on the fourth Wednesday in July for the CSA’s annual Arts and Crafts Fair. (This year it will be held on July 22). While art fairs in northern Michigan are synonymous with summer, what separates this fair from most others is that not only is it organized by the summer residents of Pilgrim (a tiny hamlet a few miles north of Frankfort along the shores of Crystal Lake and Lake Michigan), but all the proceeds go to fund a variety of both CSA and community-based projects.

To understand the philanthropy behind the art fair is to understand the CSA itself. Originally founded in 1901 as a summer camp for ministers and families of the Congregational Church, the CSA is no longer directly affiliated with the church. There are still ties, however, and the CSA remains a community where generations of families—most of whom own cottages on or near the CSA grounds—have spent their summers, and the “Assembly Way” philosophy still inspires members to do good within the CSA community and beyond.

The CSA has always been a community committed to the arts, from annual musical productions held in the Meeting House to art workshops where artists hold classes on everything from painting to bookmaking. There are also swimming, tennis and ecology lessons for children (as well as a kids arts and crafts lessons), and for adults there is everything from Friday round robin tennis socials to lectures, book launches and choir.

There is even an Archives cottage, which houses pictures, memoirs and history on the CSA and its activities over the years. The CSA also is very much involved in the surrounding Benzie County community, providing education scholarships for local (as well as CSA) college students and contributing financially to organizations including Crystal Lake Watershed Association (http://www.clwa.us), the Benzie County Council on Ageing (http://benziecoa.org), the Benzie Area Christian Neighbors (http://benziebacn.org), and funding women’s health programs at Paul Oliver Memorial Hospital (http://www.munsonhealthcare.org/pomhwellness).

All of these projects and events, of course, require funding. The Women’s Association, which was founded in 1926, is one of the largest funders for several CSA programs and is a philanthropic arm to local community projects. In order to make the money needed to support the programs, the association decided 37 years ago to start an arts and crafts fair. Of the money raised during the fair—annually between $10,000 and $13,000—about 10 percent goes to educational scholarships (the CSA Education Scholarship and the Benzie Area Zonta Scholarship Fund), 50 percent goes to finance CSA programs, and the other 40 percent to local community programs.

Well over 1,000 people attend the fair each year, coming to browse the booths for pottery, photography, jewelry and more. Typically 100 vendors sell their works, and five spots are reserved for not-for-profit organizations to promote their projects. Money is also raised from Cottage Treasures (akin to a garage sale of items from CSA members) and a Silent Auction, where items up for bidding have included everything from Persian carpets to historical posters of Northern Michigan.

One of the most popular CSA programs that receives significant funding from the proceeds of the Arts and Crafts Fair is the ecology course for children. Run by the earth and environmental sciences teacher at Benzie Central High School, the class teaches everything from the local geology of the area to the ecosystems in both Crystal Lake and Lake Michigan. The CSA also offers an internship program for budding local scientists ages 12 to 18, who help out with the program.

“The ecology program is a way for my kids to connect to the natural world,” says Kristin Kirsch Feldcamp, a lifelong CSA summer resident who lives near Denver. “For example, they learn about the history of the Native American people, so one of the things they did one summer was make birch bark pouches. And they also have dissected owl pellets, gluing what they found to a piece of paper. One year my daughter brought home a mouse jawbone. For Greta, at age 5, it was her first introduction to the food chain, which is pretty cool.” It’s also pretty cool that all that shopping goes to a greater good—helping the CSA continue its long tradition of helping members and others through the “Assembly Way.”