Sitting atop the vessel Mishe-Mokwa as it pulls away from the wooden dock in Fishtown in Leland, the Lake Michigan breeze tangles its fingers through my hair as I try to remember if I packed everything for my Northern Michigan outdoor adventure. The weight of the backpack says yes, but I have a lingering thought that something is still back home on the kitchen counter.

There’s no turning back as the ferry gets farther from shore. That’s part of the thrill of backcountry camping on North Manitou Island. It’s all up to you.

The island rests in Lake Michigan about 12 miles west of Leland and is part of the Sleeping Bear Dunes National Lakeshore. Covered in a forest of maple and ash trees, the 22 square miles offer a quiet solitude and wild beauty to those who venture across the Big Lake to its austere shores.

The 2.5-hour ferry ride to the island is calm and only interrupted by the call of gulls and a brief stop at South Manitou Island to pick up campers from the previous night.

As the mainland fades away into hills of dark green, my boyfriend, Jay, and I watch as the trees and rocks along the shore of North Manitou slowly take shape. We round the south end of the island, and the dock comes into view. We pass by Dimmick’s Point, where Jay hopes to catch a glimpse of the endangered piping plover, a small sandy-colored shorebird.

After this trip, head to the Manitou Islands page for more camping and hiking info and adventures.

Mooring on the east side of the island, we leave the Mishe-Mokwa behind as we step onto the dock and walk toward a small cluster of buildings known as the village.

The village was created in the mid-1850s when Nicholas Pickard moved his cordwood station from the south end of the island to this location on the east side. Lumber and fishing sustained the island’s economy. However, the buildings remaining today are from a later era when the island was occupied by vacationers, employees of the U.S. Life-Saving Service Station and the Manitou Island Association, which dominated island agriculture.

To the left of the dock is the U.S. Life-Saving Service Station composed of the Hans Halseth House, the 1854 Volunteer Rescue Station, the 1877 Life Boat Station and the 1887 USLSS Dwelling, which provides quarters for the National Park Service rangers who patrol the island.

Behind the station, atop a small bluff, sits a row of historic cottages once used as summer homes by a group of friends from Chicago. Though covered in white flaking paint and tinged with gray, the cottages have a rustic beauty.

Perhaps it’s the idea of living on the isolated island, or maybe it’s their simplistic charm, that draws me to peer through the windows. Looking past the rubble, beautiful wooden fireplaces and floors bring to mind cozy nights spent with family. At the end of the row sits the Katie Shepard Summer Hotel fondly known as “The Beeches.” The hotel was built in 1895 for Mrs. William Shepard’s daughter, Katie, who operated the hotel and dining room until the early 1930s.

Today, Preserve Historic Sleeping Bear is working to maintain and restore these structures, which serve as a reminder of a time when people once populated an island that is now a refuge from society.

As we reach the end of the dock, we are greeted by General Ranger Troy Bailey, who gives us a short orientation on backcountry camping regulations and helps us decide where to camp. He recommends Fredrickson’s Place, a small clearing on the southwest side, which is about a 5-mile hike from the village.

Troy reminds us that once we leave the village there are no sources of clean drinking water, and if we get hurt, help may be a few hours away depending on where we’re located.

Behind Cottage Row, the path veers left and a wooden post reading “Entering Wilderness” marks the start of our expedition. A garter snake slips underfoot barely escaping my shoe and chipmunks rustle the leaves as they search for food. Without a natural predator, these chipmunks rule the island.

The terrain on our hike is mostly flat and takes us on a winding jaunt through the forest. We don’t see a single person during the two-hour trek.

The trail takes us through a few grassy clearings and along a sandy bluff before we reach our destination. Marked by another wooden signpost surrounded by smooth white rocks, Fredrickson’s Place is a welcome sight. 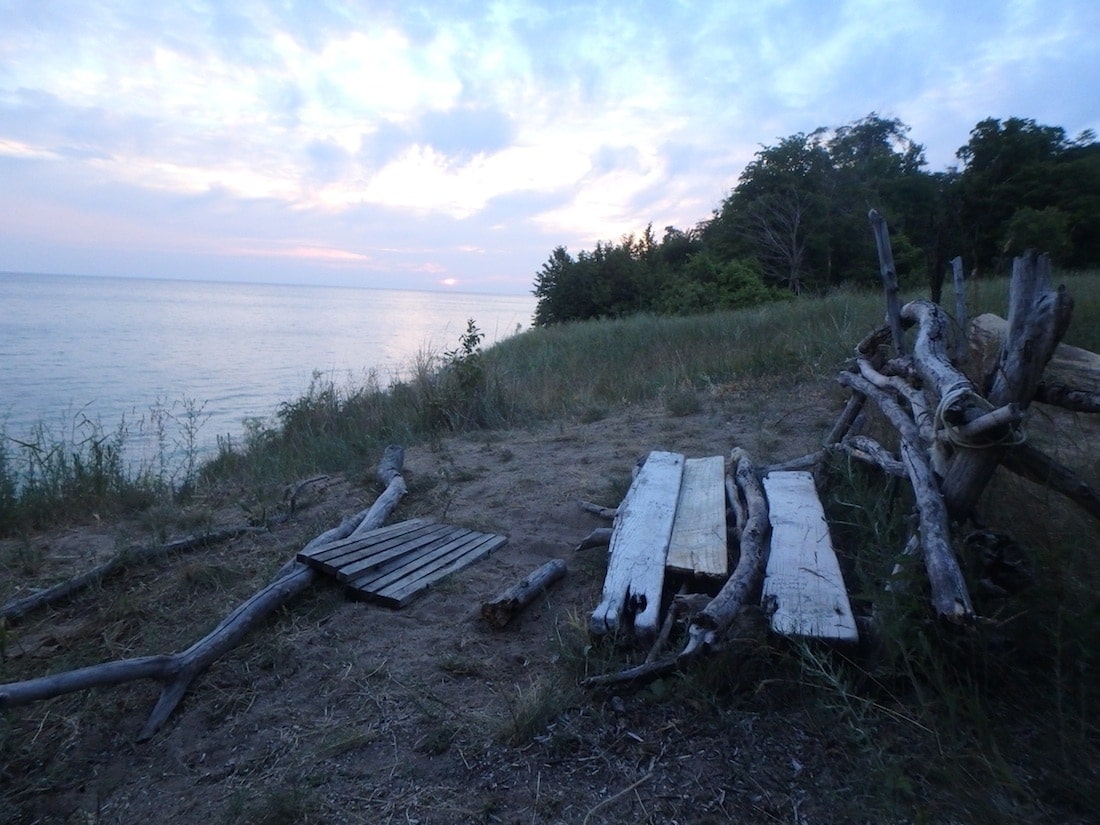 As Jay and I walk to the edge of the clearing, a sandy bluff down to the shores of Lake Michigan comes into sight. We find a bench made of branches and twine resting on the bluff and sit for a while soaking up the stunning view of Lake Michigan and South Manitou Island.

Beyond the bench, along the edge of the clearing, a string of trees looks like it will provide protection from the wind and a good spot for our camp. We nestle the tent in the center of a small ring of maple trees and hang our food from one of the branches. Though the chipmunks are cute, I’d much rather be the one eating my granola bars and peanut butter.

Once everything is set up, we head down the bluff to spend the rest of the afternoon exploring the beach. Walking along the shore, the sand shifts beneath our feet and the water is cool. Petoskey stones are strewn along the shore between glistening rocks in every shade.

The abundance of Petoskey stones is evidence that the National Park Service’s slogan, “Take nothing but pictures, leave nothing but footprints,” is respectfully followed by many campers on the island.

However, even these remote shores cannot completely escape the heavy hands of humans. 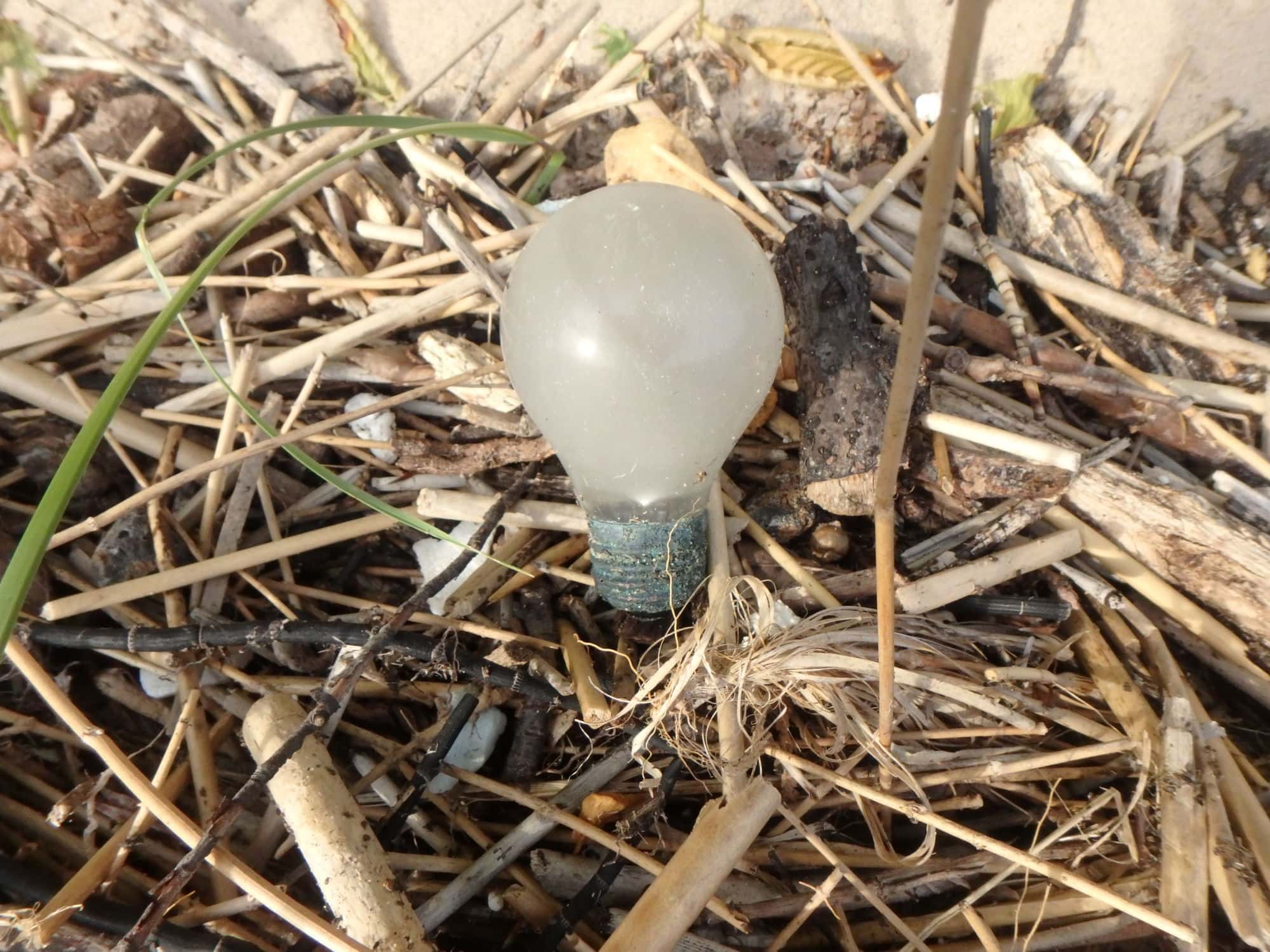 Though we have yet to see another person, discarded gas cans, plastic bottles, a piece of insulation and light bulbs are scattered along the beach.

The objects are foreign and harsh in the otherwise pristine environment. Some of the items likely washed to shore from the decks of passing boats while others may have been left by negligent campers.

About a mile from our starting point, we get our first sighting of people on the island— three young guys playing cards while they wait for the sunset.

We walk south with hopes of reaching Dimmick’s Point, the home of a piping plover nesting area. To protect the endangered species, a section of the point is closed to the public from May 1 to August 15 to help ensure the eggs successfully hatch. Jay hopes to see one of the adult birds from nearby. After about 1.5 miles, we reach Donner’s Point and my growling stomach urges me to turn around though we still have about 2 miles to go. My stomach (and loud mouth) almost won the debate to head back to camp when a distinctive high-pitched chirp breaks the even rhythm of the waves.

My stomach will have to wait.

We scan the beach looking for the bird. I spot it quickly running across the sand on two thin legs disproportionate to its small body. A second one dashes between clumps of dune grass farther up the beach.

Though we can’t get close, the 20 minutes we spend watching the plovers are a highlight of the trip.

As the sun begins to set, we decide to finally head back. Though the sky is cloudy, wisps of peach, pale indigo and a brilliant pink escape from their covers. The view is arresting. 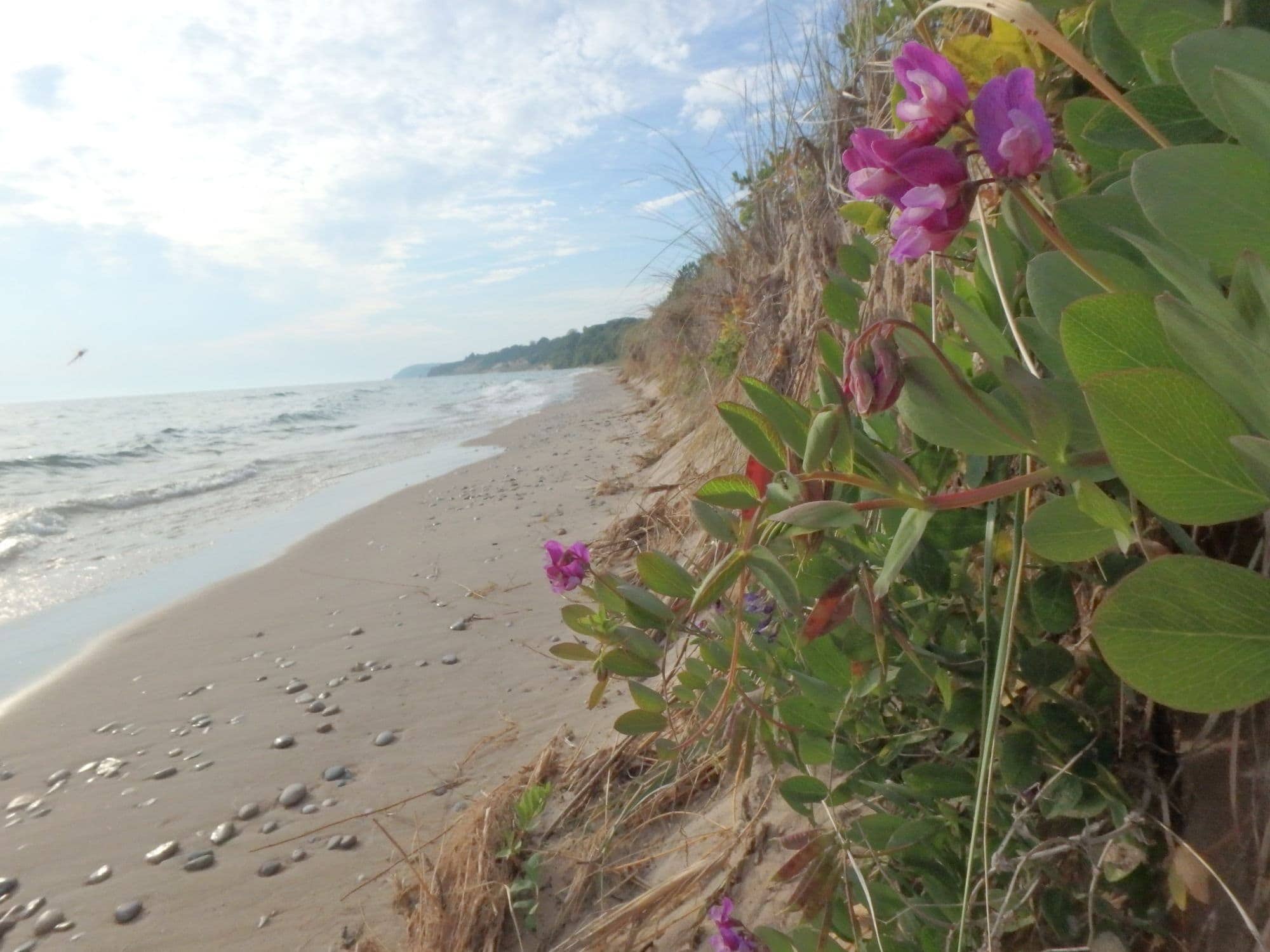 Later that night, rather than falling asleep to the sound of barking dogs and passing traffic, lapping waves coax us to sleep. As I zip myself into the sleeping bag, I try to remember every detail of the surreal setting surrounding our tent. It’s hard to believe this striking wilderness exists so close to home.

The 24-hour vacation from the never-ending commotion is refreshing, but it’s also a reminder of our effect on the environment.

Thank you to the rangers and the volunteers who work to protect the natural beauty and history of Michigan, but to fellow visitors, campers and boaters: remember, it’s up to you.

Planning on camping on North Manitou Island? Review this complete packing list and a map by the National Park Service.