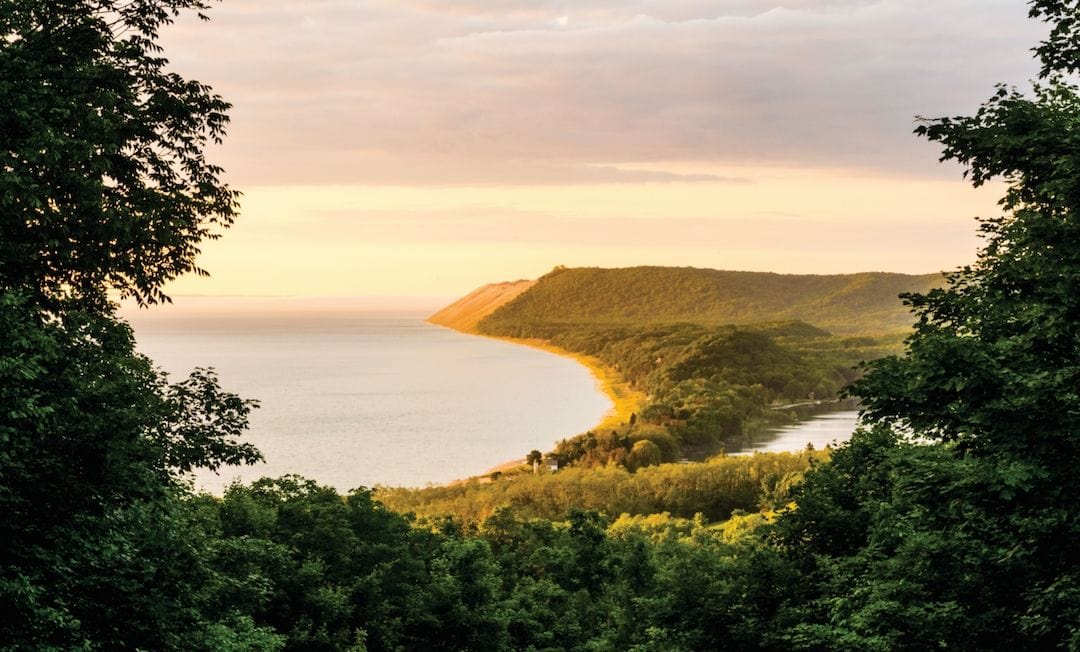 Summer in Northern Michigan is pure magic. To capture the awe of golden-sand beaches, remote islands and applause-worthy sunsets, we invited intrepid photographers and Michigan explorers (and father-son team) Todd and Brad Reed to offer images from their wanderings around the north country. Here then are 14 gorgeous places to share with your favorite people. Put each on your summer sojourn bucket list. 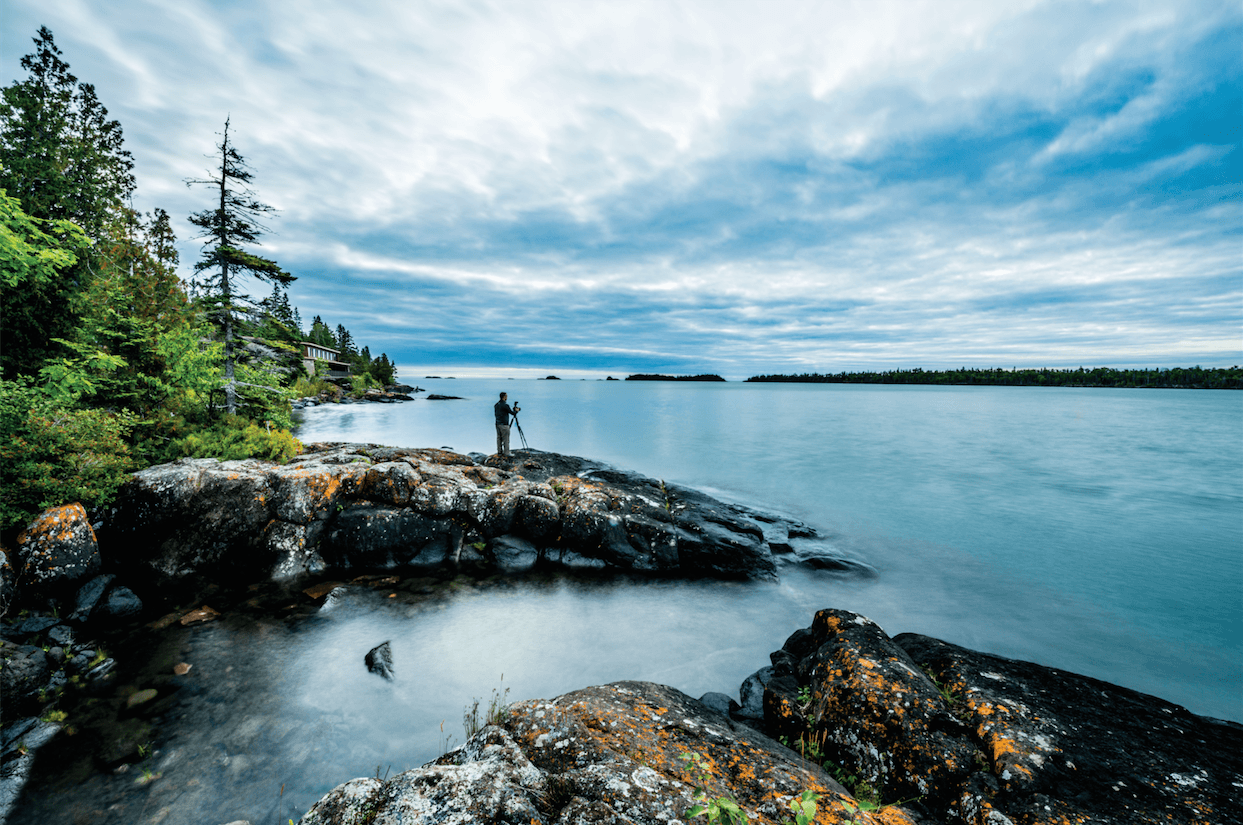 My son Brad is in position to photograph dawn’s early light on Isle Royale. We are on the 45-mile-long main island of the Isle Royale archipelago. Another action-packed day of exploring and photographing this captivating Michigan National Park lies ahead of us. The large waves we encountered a day ago on our ship voyage from Houghton to Isle Royale have now disappeared. Lake Superior, the largest freshwater lake by surface area in the world, has turned into a mirror overnight.

In the neighborhood: There are not many options on the wilderness island of Isle Royale, but luckily the options that do exist—both at Rock Harbor Lodge, where the ferry docks—are good. Find fine dining at the Lighthouse Restaurant and casual fare and pizza at the Greenstone Grill. 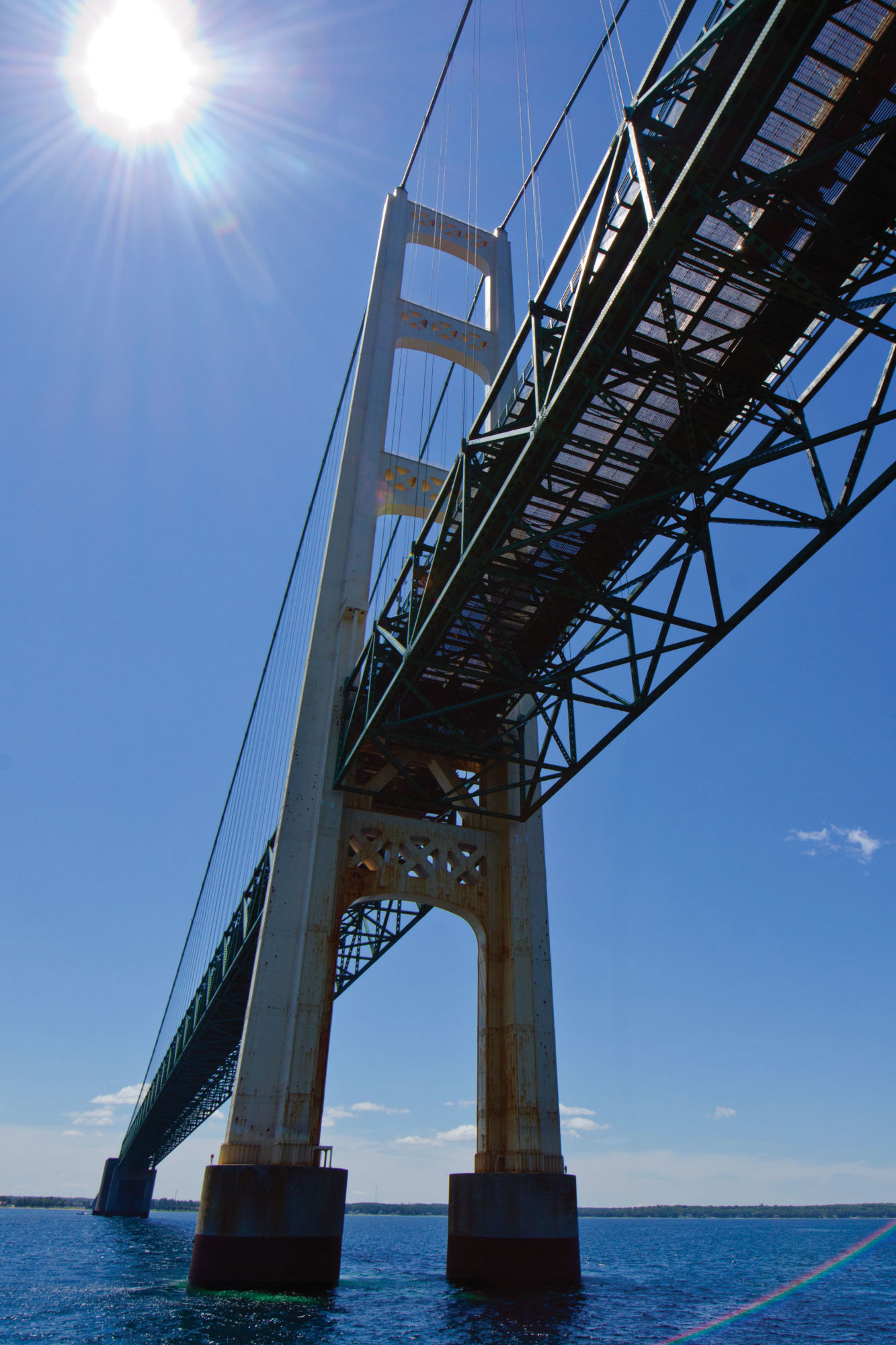 The Power and Beauty of the Mac
By Todd Reed

From a Shepler’s cruise vessel, I get a sailor’s view of one of the two main towers of the Mackinac Bridge rising 552 feet above water level. Another 200 feet-plus of the tower extends below water level to help support one of the longest suspension bridges in the Western Hemisphere.

In the neighborhood: The Dixie Saloon in downtown Mackinaw City has a wonderfully laid-back atmosphere, and the burger basket and French fries call us back. When we are in St. Ignace we like the Driftwood Sports Bar, especially the pancakes for a hearty start to the day. 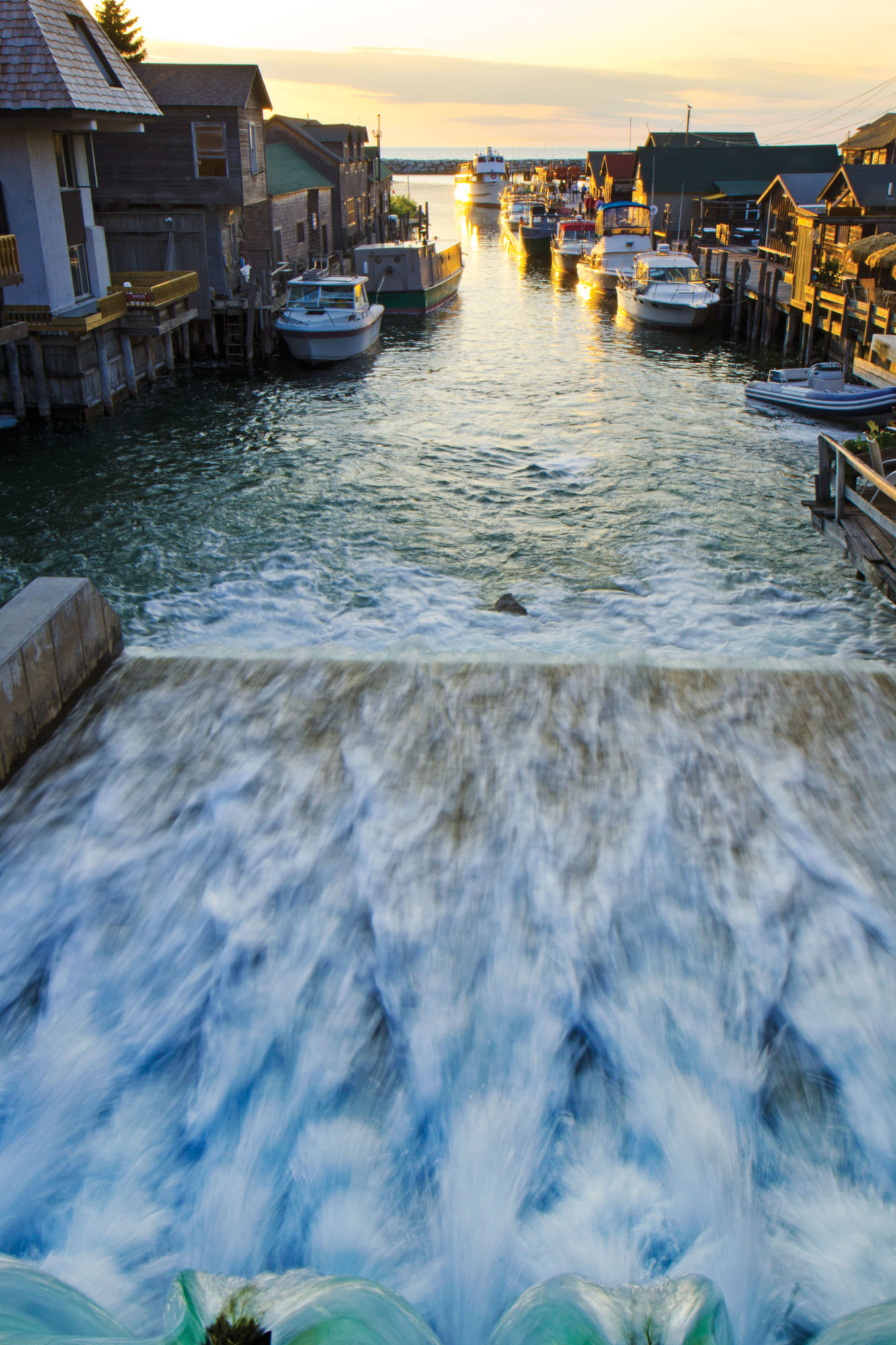 Evening in Fishtown
By Todd Reed

Looking downstream from the Leland River dam, it is easy to imagine what this fishing village looked like a century ago. The citizens of Leland have gone to great lengths to preserve the historic look of this still active commercial fishing port.

In the neighborhood: When in Leland’s Fishtown, we like to immerse in the experience by grabbing a table on the deck at The Cove to share a brew and a sandwich. It’s fun to sit there right below the dam near the cedar-shake shanties, with the water gushing by in its final run to the big lake. 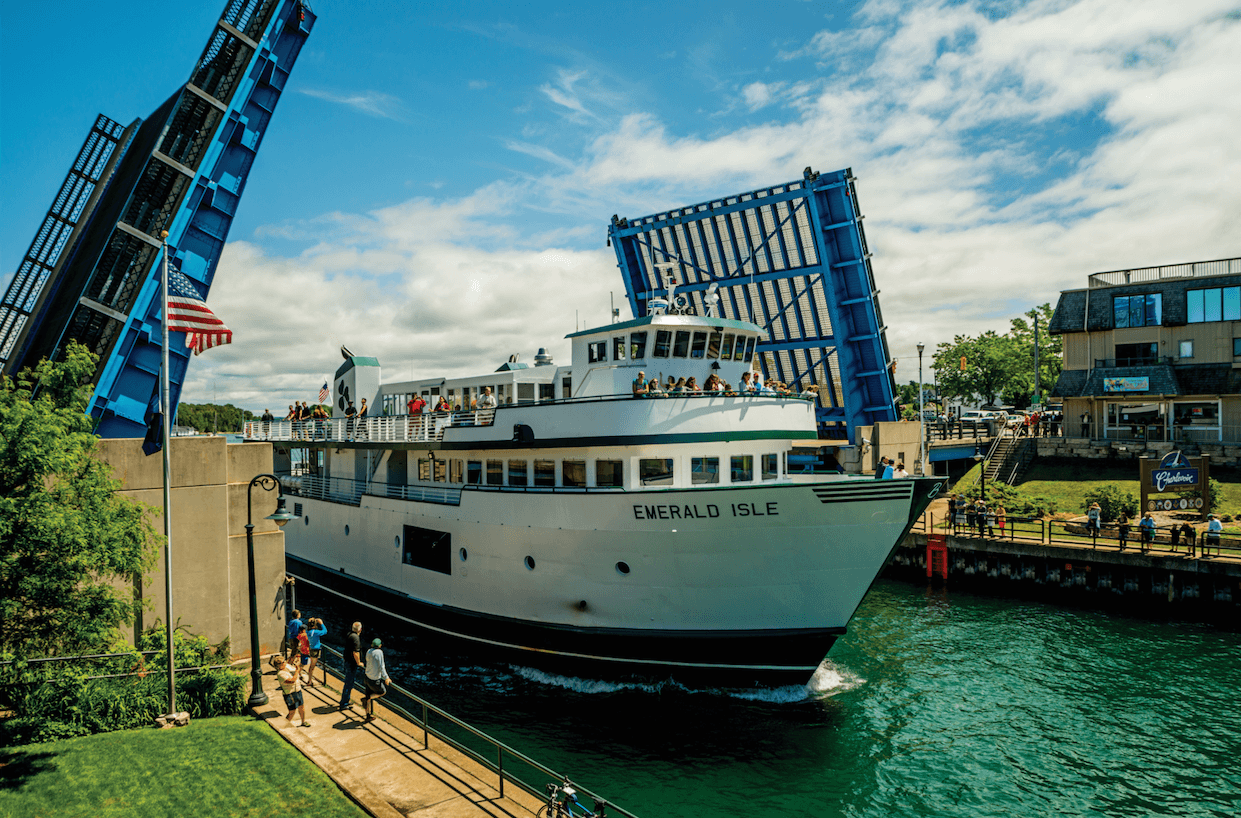 What could be finer than sitting on the deck of the Weathervane Restaurant on the Charlevoix channel eating a fine meal with my wife, Debbie, and watching the boat traffic? I stopped eating long enough to make this ringside-seat image of the outbound Beaver Island ferry Emerald Isle. The beautiful ship, the US31 drawbridge, and the Weathervane are Charlevoix icons.

In the neighborhood: Another Charlevoix venue to try is Bridge Street Taproom, near the channel and docks of Round Lake. Thirty-three brews on tap, pizzas, sandwiches, more. 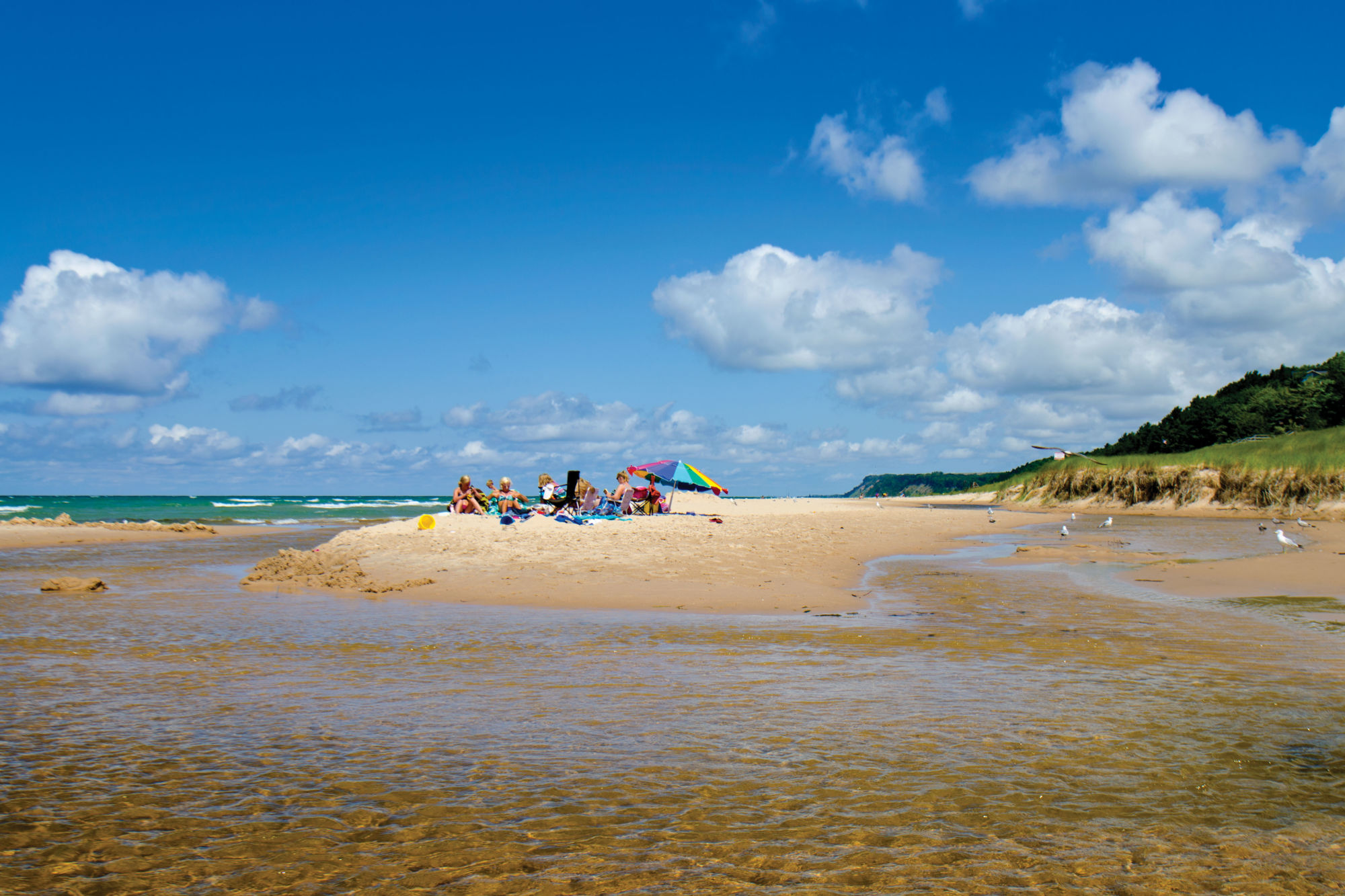 Island in the Stream
By Todd Reed

Looking at sunbathers on an island at the Bass Lake Outlet to Lake Michigan, between Ludington and Pentwater, I find myself wanting to sing a favorite Kenny Rogers and Dolly Parton song about Islands in the Stream. What a special piece of Michigan real estate this spot is!

In the neighborhood: The closest restaurant to Bass Lake is also one of our all-time favorites, Bortell’s Fishery. It’s a take-out place with a fish-centric menu—fried fish, smoked fish, fresh fish. We especially like the fried perch and French fries. Bortell’s is right across the street from Summit Park on Lake Michigan. Take your food there and let the kids play in the playground or catch the sunset. 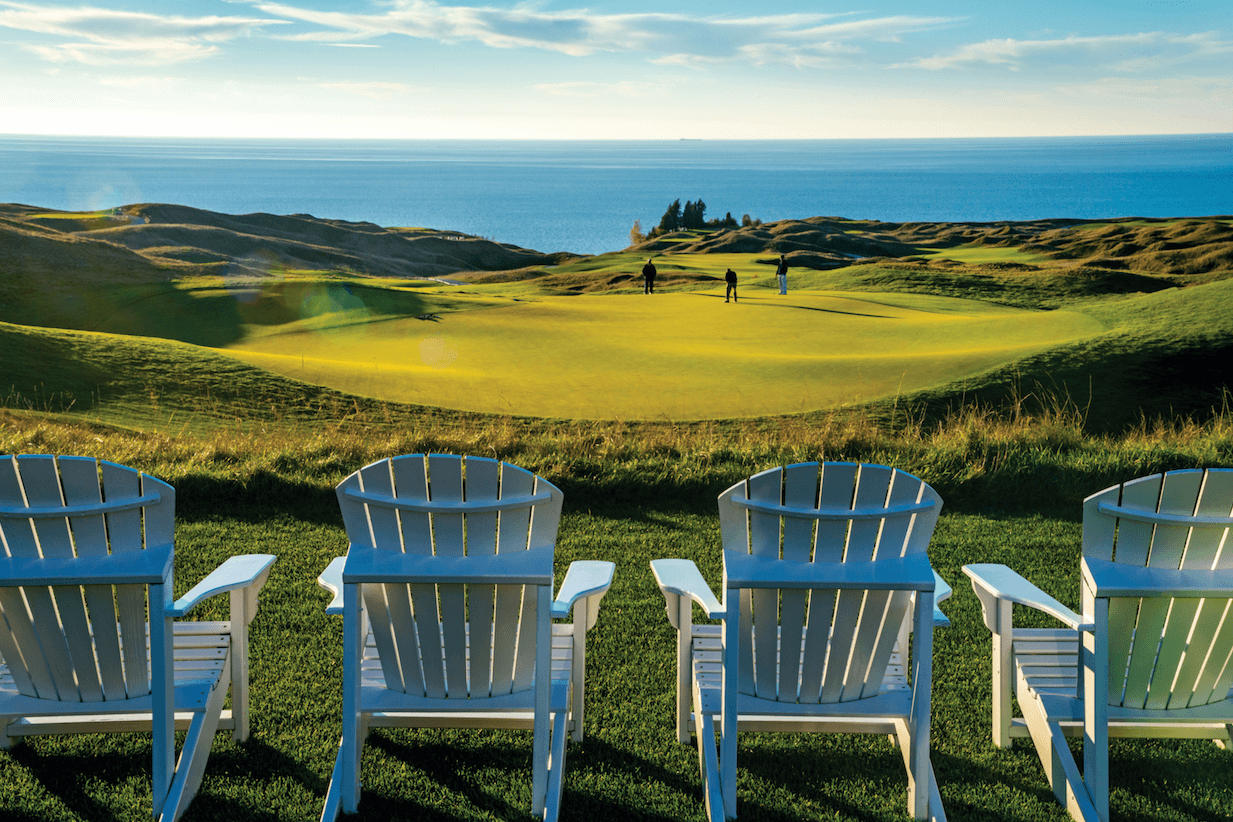 In the neighborhood: Find excellent fine dining right onsite at Arcadia Bluffs’ Dining Room and a more casual menu in the resort’s Lake View. Grab a seat on the deck to enjoy that see-forever view. Just south in Onekama, we love The Glenwood, everything on the menu is delicious. 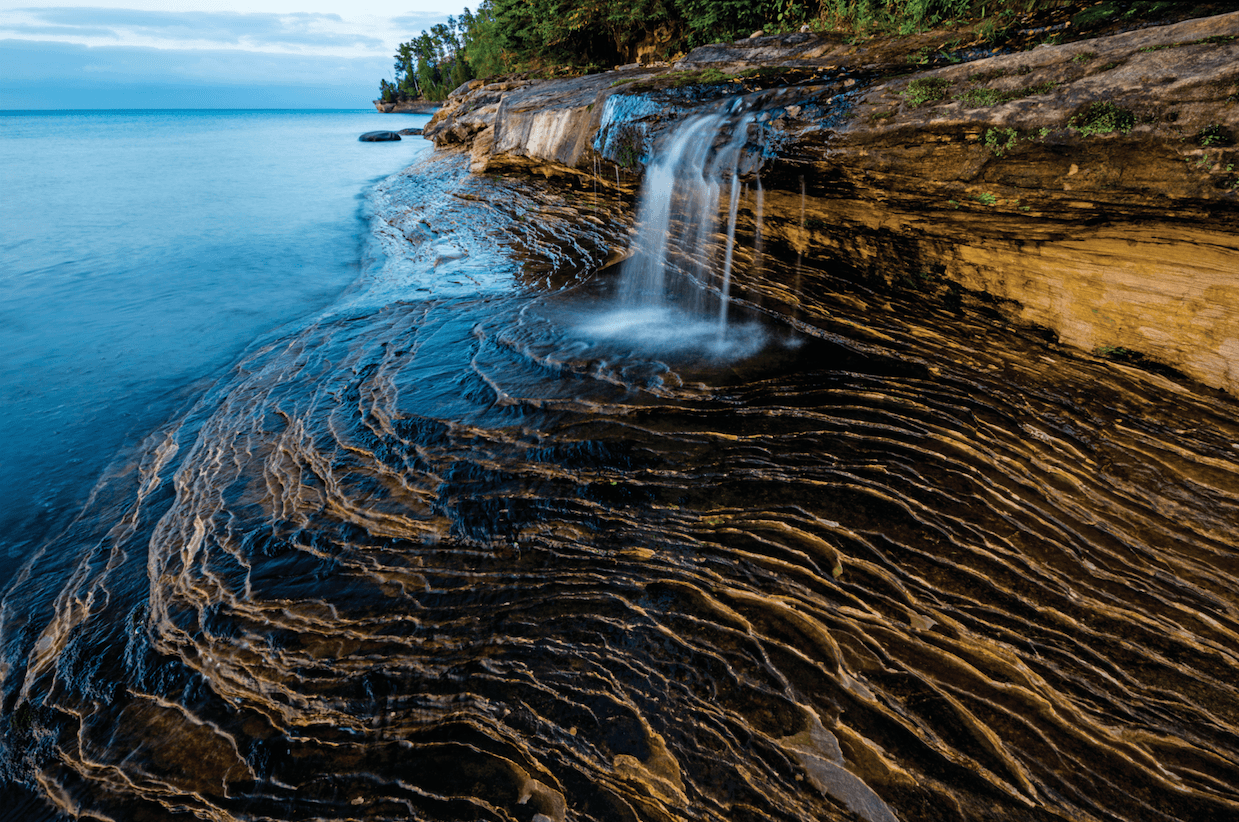 Pictured Rocks National Lakeshore is a photographer’s paradise. I could spend a lifetime exploring and photographing the park without getting bored. Every few steps I can find something that catches my eye. Miners Beach Falls is a popular destination for the thousands of visitors to the Pictured Rocks National Lakeshore—captivating and easy to reach from the parking area.

In the neighborhood: When we are up in the Pictured Rocks area, we like to swing by Muldoons Pasties & Gifts. It’s pretty much a requirement to eat a pasty every time you visit the U.P. 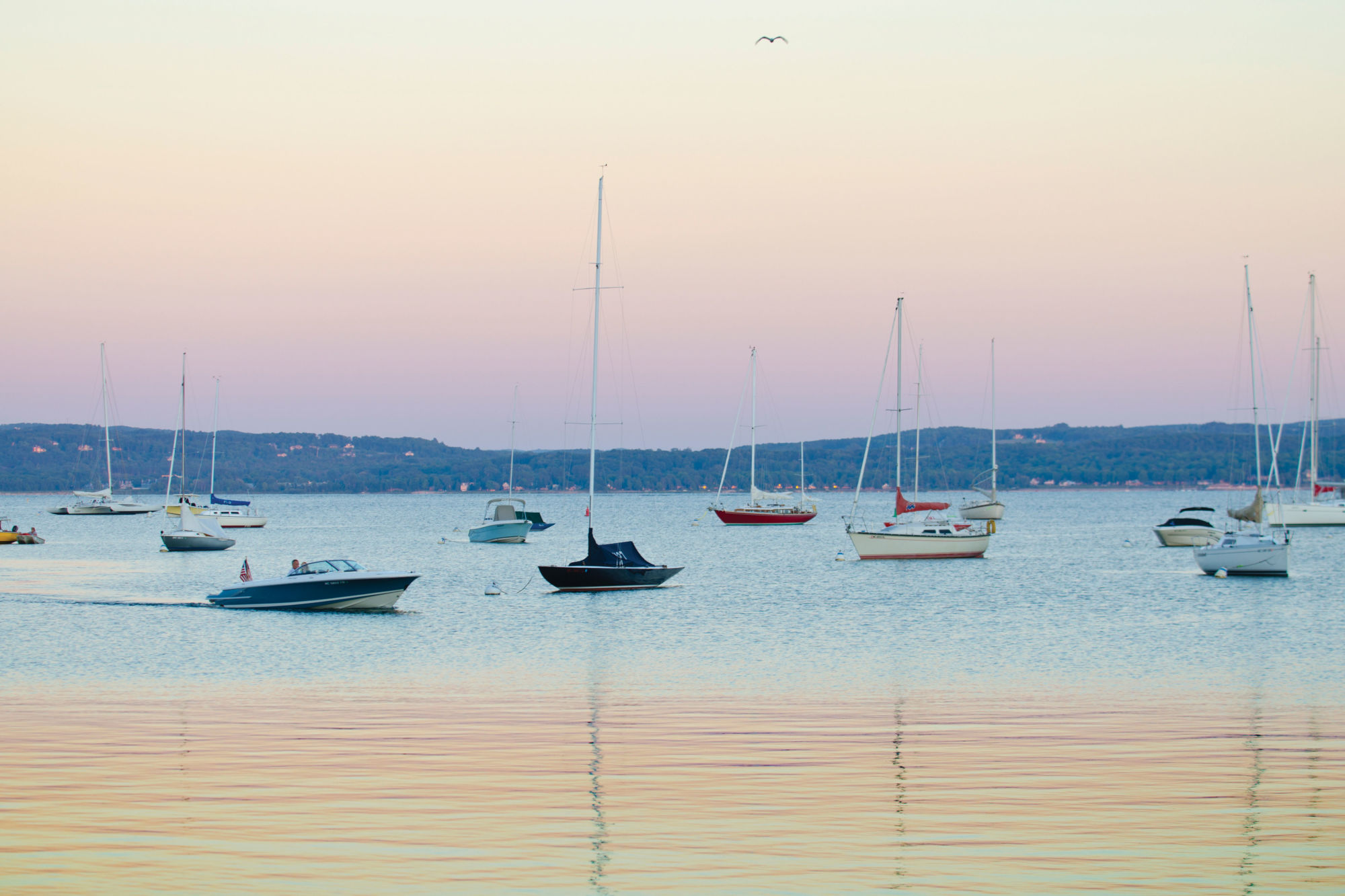 Hooked on Summer
By Todd Reed

After running four blocks to my vehicle to grab the lens that earlier I had decided I was not going to need, I get my telephoto lens mounted just in time to capture this image at Harbor Springs. I should know better than to leave one of my main lenses behind. I would hate to have lost my chance to record this view in one of Michigan’s most picturesque harbors.

In the neighborhood: We can watch pictures appear before our eyes while seated outdoors on the lawn at the water’s edge at Stafford’s Pier Restaurant. Their planked white fish is excellent. 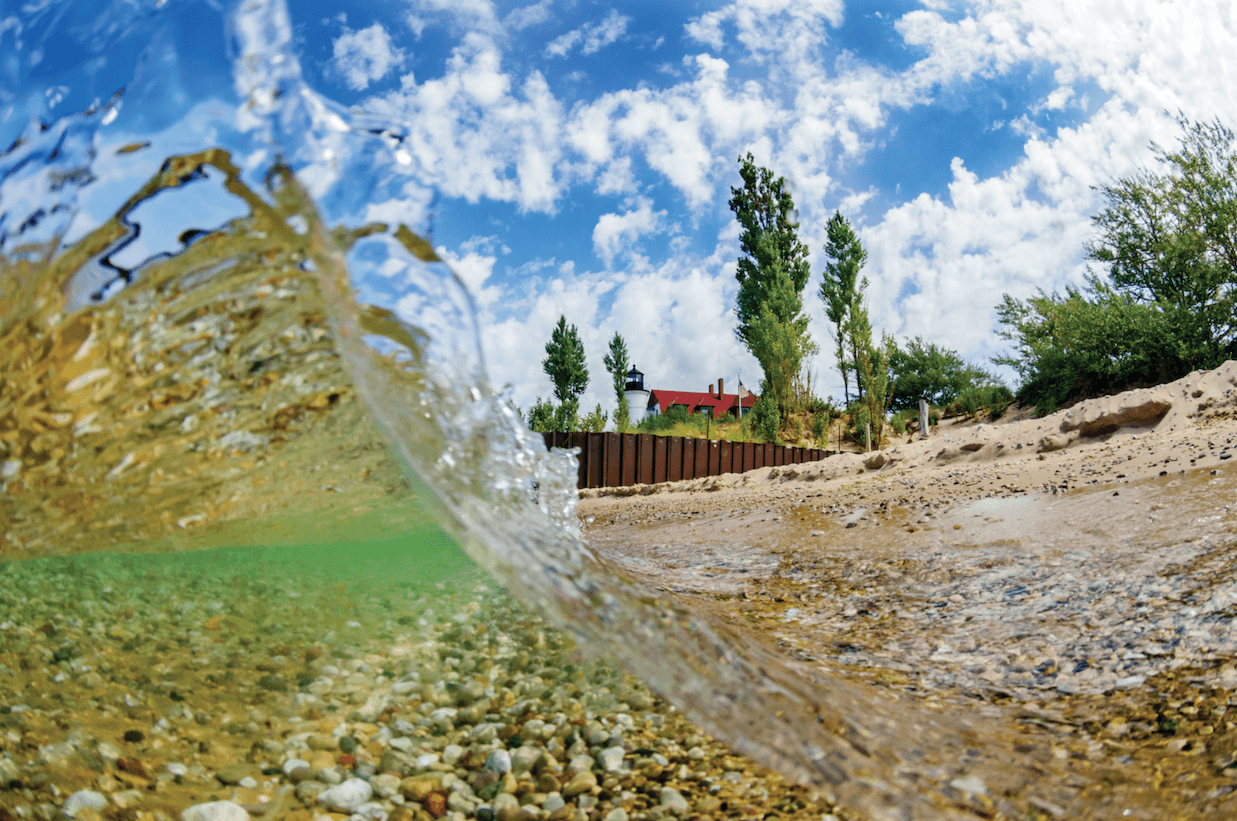 Under Water at Point Betsie
By Brad Reed

I was horribly disappointed today when my dad and I made it to the shoreline at Point Betsie Lighthouse just north of Frankfort, and found Lake Michigan flat as could be. It was beautiful, but I needed some rolling waves in order to make the image I had created in my head a few days earlier. As I was preparing to shoot Plan B, my dad pointed out that a large sport-fishing boat was screaming by just offshore and was creating a large wake. I rushed to get into position and set my underwater camera to the correct settings; then it was just a matter of timing.

In the neighborhood: When we shoot near Frankfort, we always stop in to Stormcloud Brewing Company for pizza and beer. We like the Apocalypse brew—it’s my all-time favorite Michigan beer. 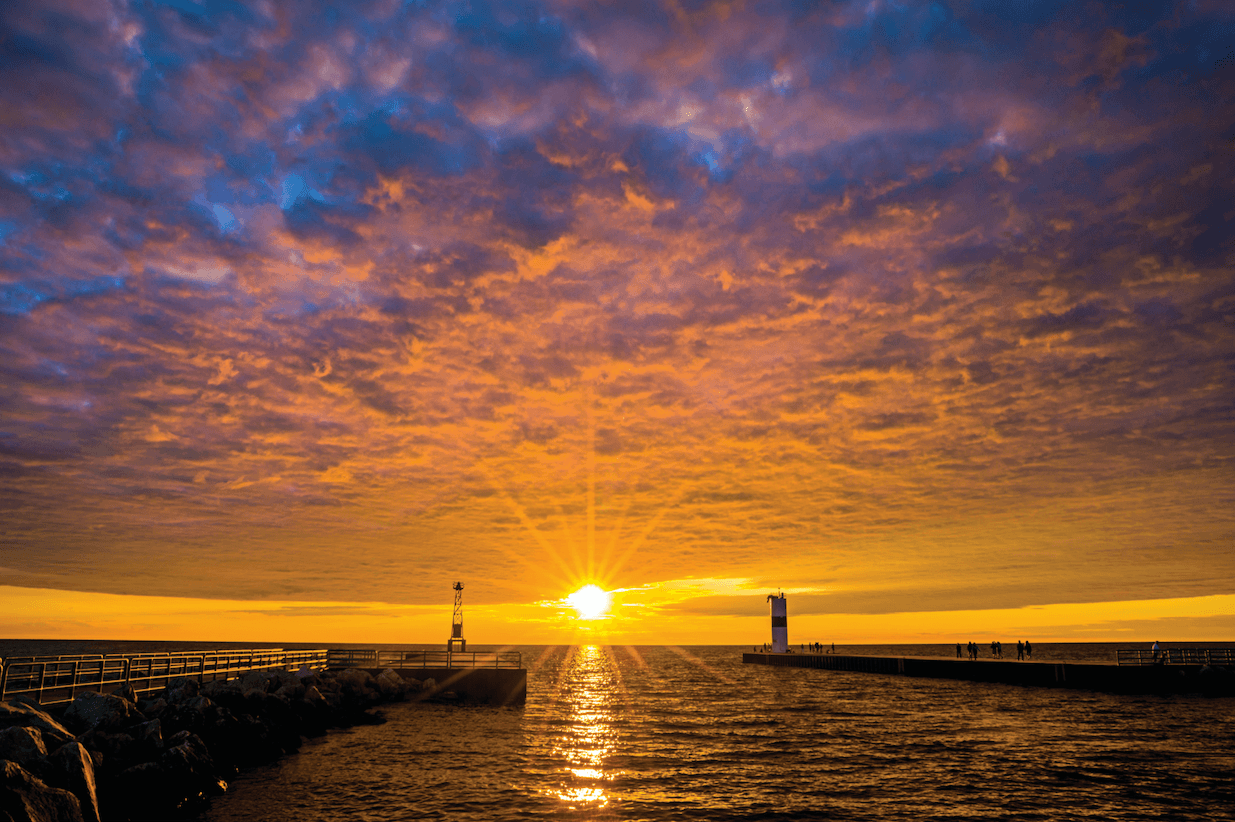 A cool new tradition in Pentwater every summer night is to give the sun a standing ovation as it dips into the water. I am sure this happens in several Michigan beach towns. It would be fun to try coordinating it statewide on the same evening and make it an annual event.

In the neighborhood: One place we like in Pentwater is the Brown Bear. From the deck upstairs you can look right down the channel. From that perch you can see the sunsets and a little bit of the lighthouse. The Brown Bear is famous for the Brown Bear Burger, weighing in at 1 pound. 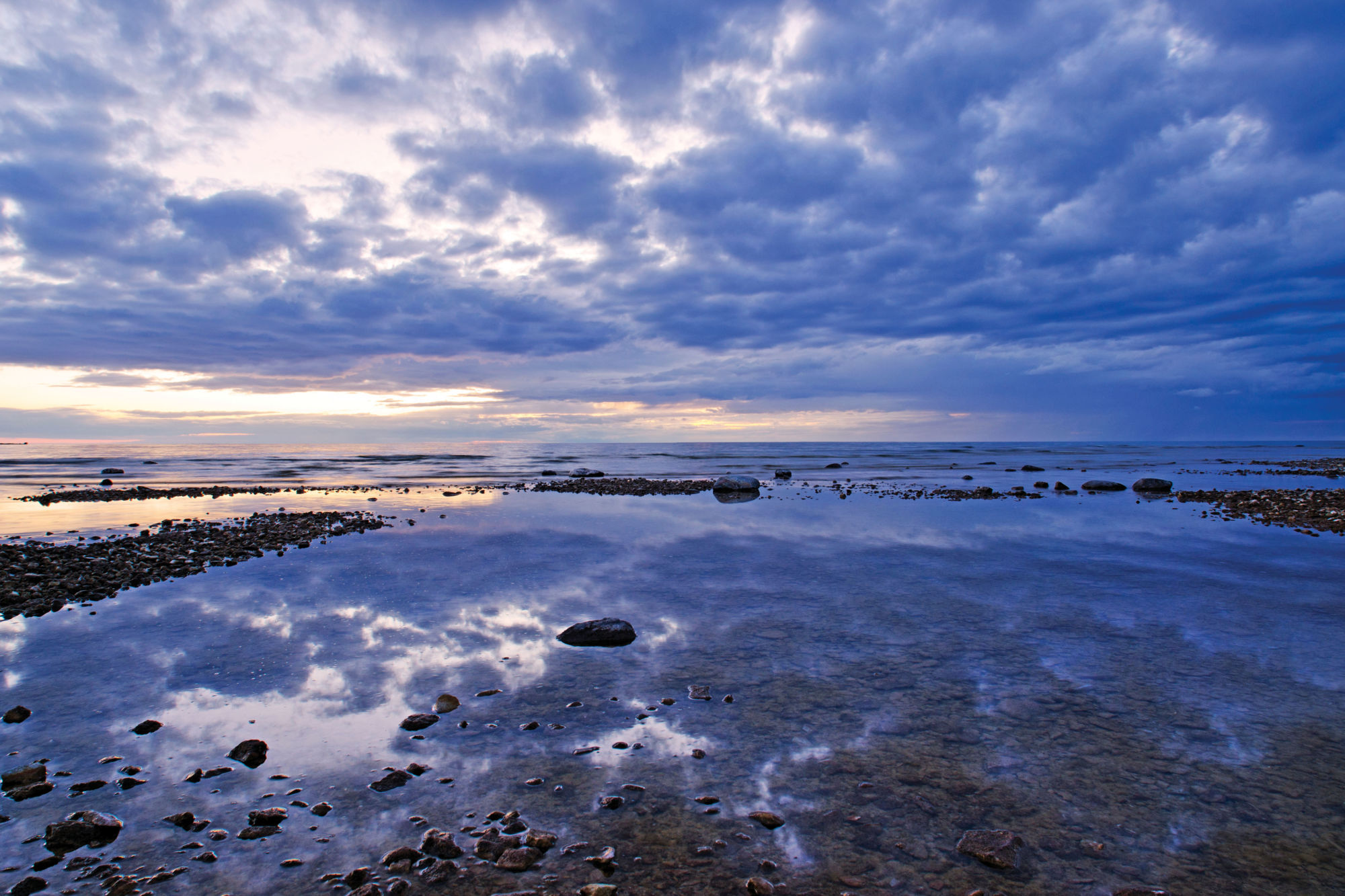 For years our family has stopped on US-31 near the Susan Creek Nature Preserve along Lake Michigan between Petoskey and Charlevoix to look for Petoskey stones. This vantage also provides a great view of the lake, and tonight I am witnessing one of the most cobalt blue skies I have ever seen. I am so glad that I have my camera, tripod, and waterproof shoes so I can capture the moment.

In the neighborhood: In Petoskey, we head for the gourmet sandwiches at Julienne Tomatoes. The ingredients are top quality, and the bread is especially delicious. One we love: the cranberry turkey combo. The homemade soup also rocks. 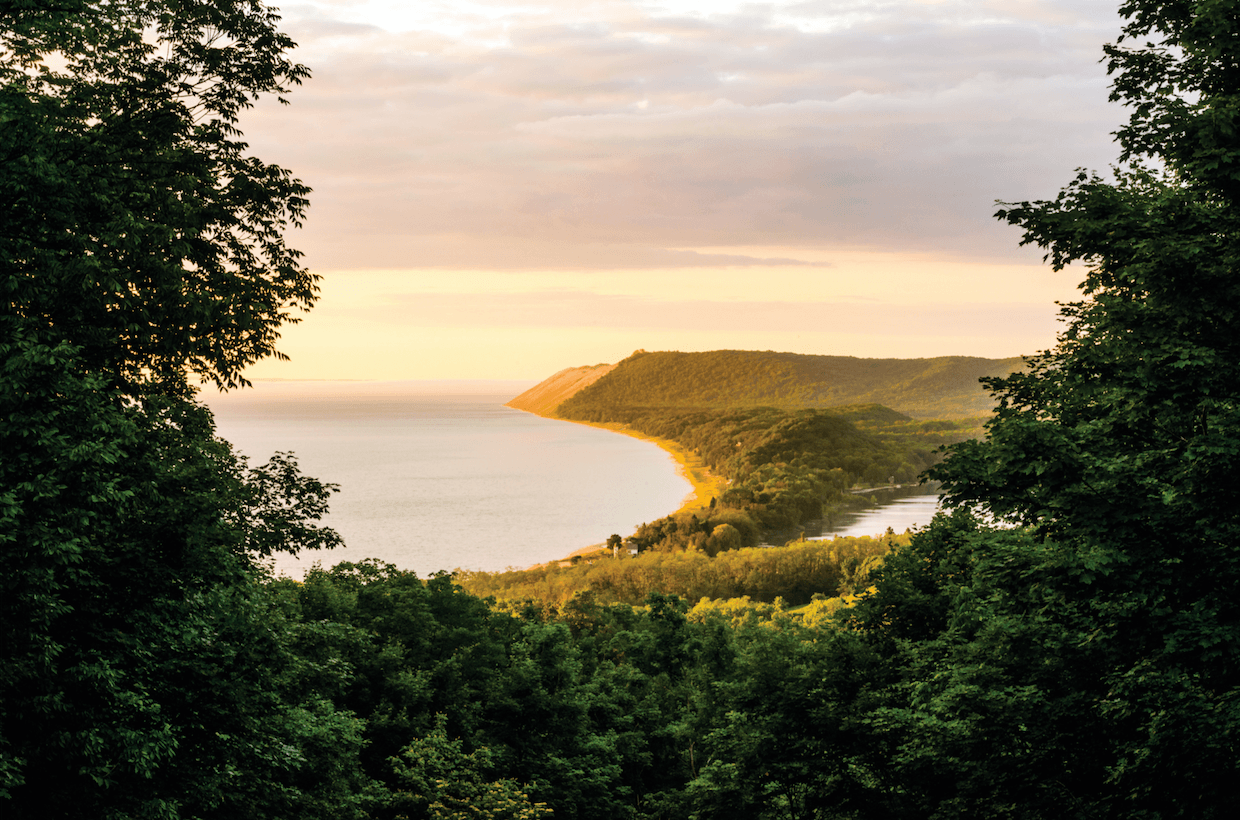 To Empire and Beyond
By Todd Reed

Brad and I are always trying to discover spectacular vantage points from which to view Michigan. Tonight we have hiked to Empire Bluff for the first time. I stop short of the bluff at this overlook spot because I just can’t resist making an image of the view northward toward Empire, South Bar Lake, and Sleeping Bear. I am content here but can’t help wondering what Brad is seeing from the bluff’s edge, farther up the trail.

In the neighborhood: Whenever in Empire we go to Grocer’s Daughter Chocolate. We always order hot chocolate there and some truffles. We also stop at Joe’s Friendly Tavern, in downtown Empire, where the chili is hearty and tasty. 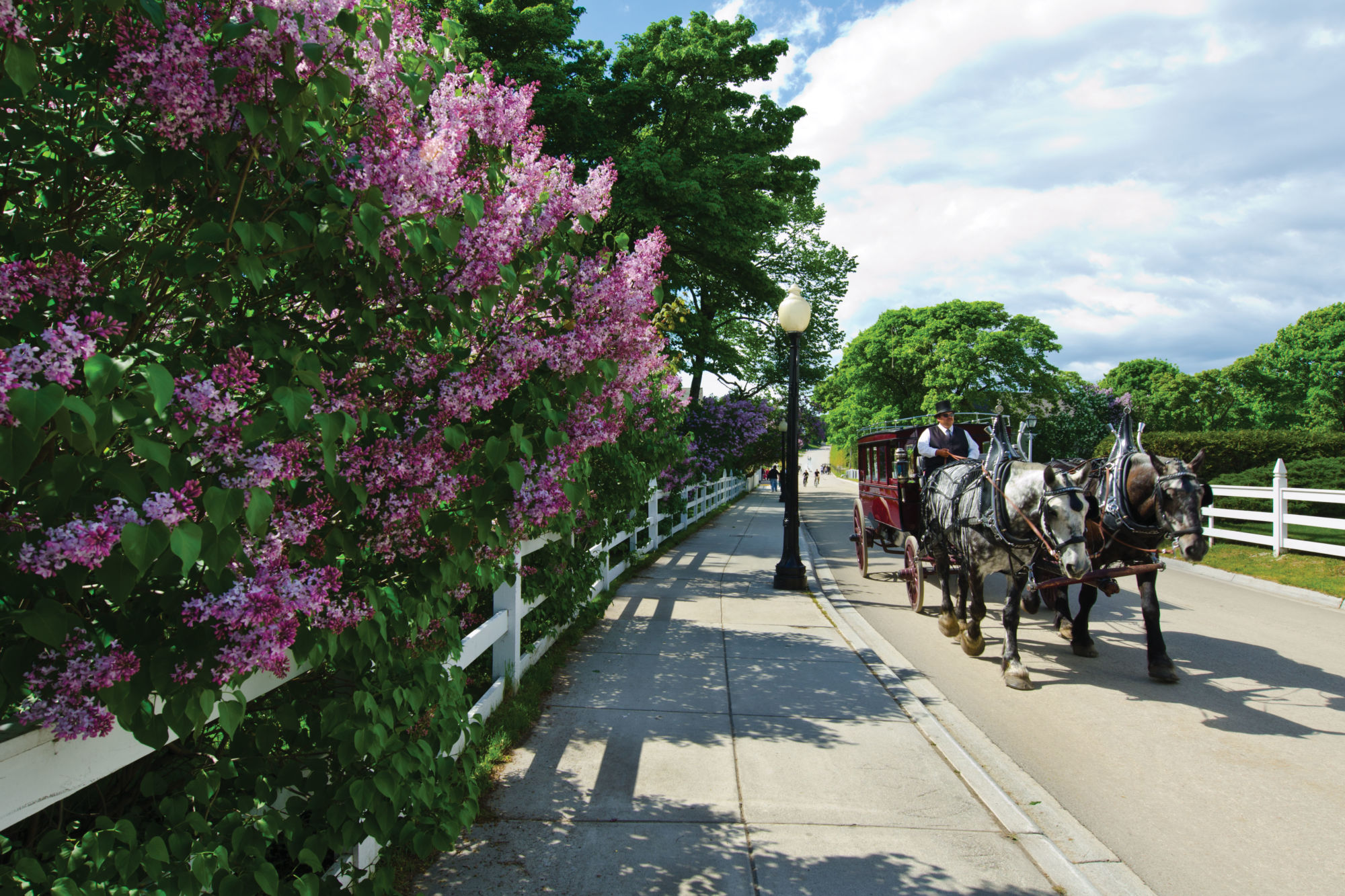 Land of Lilacs
By Todd Reed

I am thinking I am in the Land of Lilacs as I hike across Mackinac Island en route to make some images of the Grand Hotel. A horse coach from the Grand Hotel passes by as I pause to smell some lilacs and capture an image that makes the flowers appear never-ending. Brad and I are finding ourselves in lilac heaven today as we photograph Week 22 of Tuesdays with Todd and Brad Reed: A Michigan Tribute. Now we know why so many people flock to the island for the annual Lilac Festival in June. But of course, the island remains magical well beyond lilac bloom and a summer journey here is a must-do for any Midwesterner.

In the neighborhood: On the island we stop in to Seabiscuit Cafe for great burgers and a tasty fish sandwich. Of course we always rent bikes and take a spin around the shore. 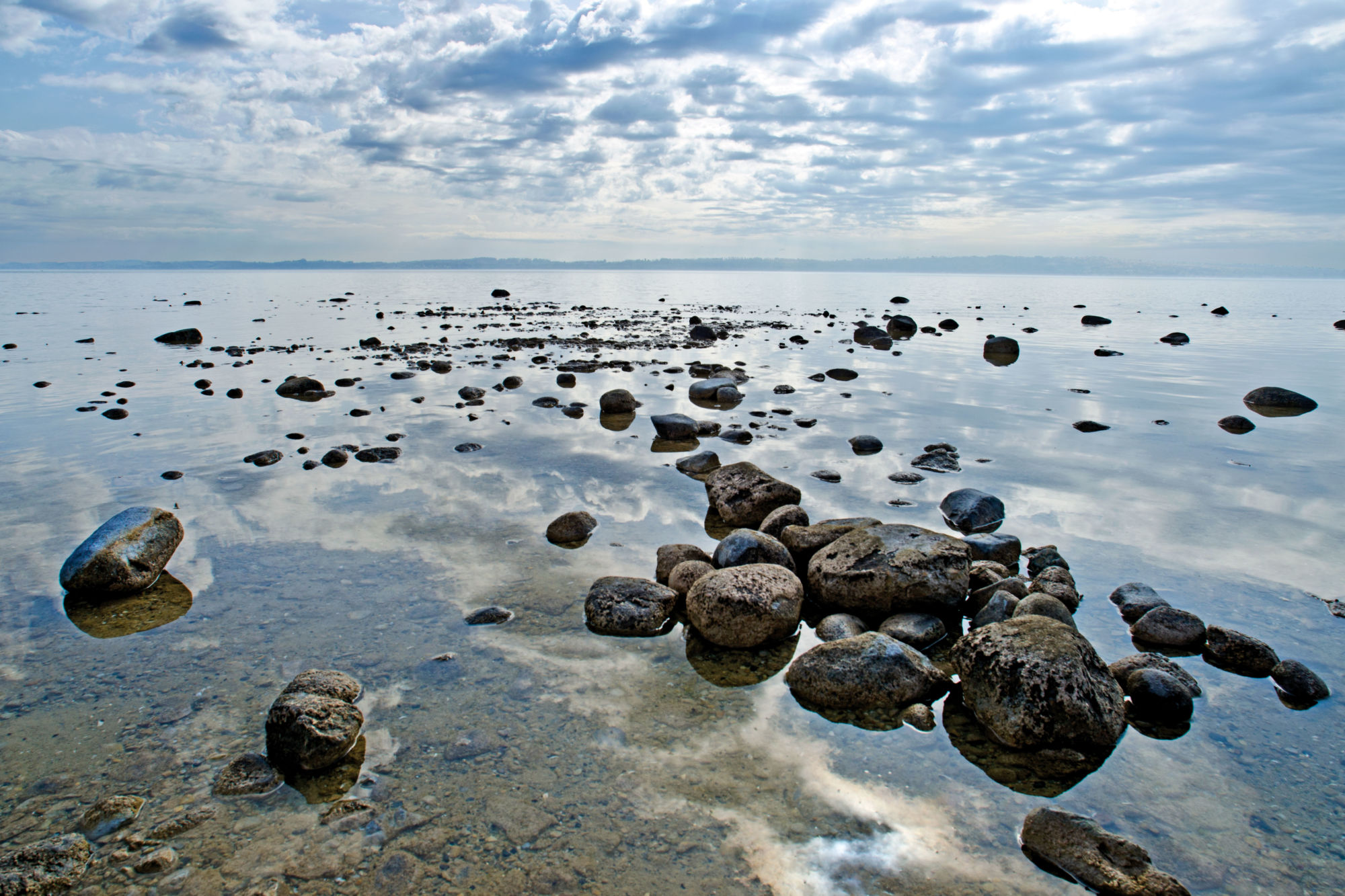 My dad and I are always looking for repetitive patterns. This morning on Grand Traverse Bay, the clouds, shoreline rocks, and the calm water combined into a gorgeous arrangement of blue, black, and white patterns that had me grinning from ear to ear.

In the neighborhood: When in the Grand Traverse area, we enjoy eating downtown at Poppycock’s. They have delicious pasta dishes and unforgettable homemade soups. We also enjoy Boone’s in Suttons Bay—excellent burgers and ice cold Budweiser in bottles.

To see more of Todd and Brad Reed’s art, visit their Ludington store or toddandbradreed.com. Featured in the July 2015 issue of Traverse, Northern Michigan’s Magazine. Get your copy!