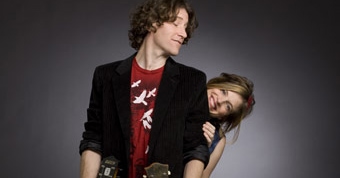 Singer-songwriters The Weepies are going to be performing in downtown Traverse City at the City Opera House on Monday, June 29 at 7:30 pm. Read on for a complete description about their background, influences and more. To purchase tickets to the show click here.

Singer-songwriters Deb Talan and Steve Tannen were fans of one another’s music before they ever met. The night they did meet, they immediately began writing songs together, and they haven’t stopped yet. The two subsequently married and began raising a family, as well as writing and performing together. Since the Weepies’ debut in 2003, many of their songs have found a home on television, in shows such as Grey’s Anatomy, One Tree Hill, Scrubs, Gossip Girl and How I Met Your Mother. The band was prominently featured during an episode of Dirty Sexy Money with an on-screen performance as an episode subplot. Their tunes have also been featured on the big screen in such films as Sex and the City and in numerous television commercials.

The Innocence, Over the Rhine

Their most recent disc, Sirens, was recorded during Talan’s recovery from breast cancer and released earlier this year. In addition to the twosome and their usual compatriots, it includes contributions from Pete Thomas and Steve Nieve (Elvis Costello), Gerry Leonard (David Bowie), Rami Jaffee (Foo Fighters), and Tony Levin (Peter Gabriel, King Crimson).

On their name: “. . . those sort of old movies that were called weepies. We want to make music that touches them and moves them in that way, the place where tears come from, for joy and for sorrow.” – Deb Talan

“The Weepies blend gentle guitars and sweet harmonies for a soothing sound that falls between traditional folk and contemporary adult alternative.” – The All Music Guide

Tickets are $30. Go to CityOperaHouse.org.