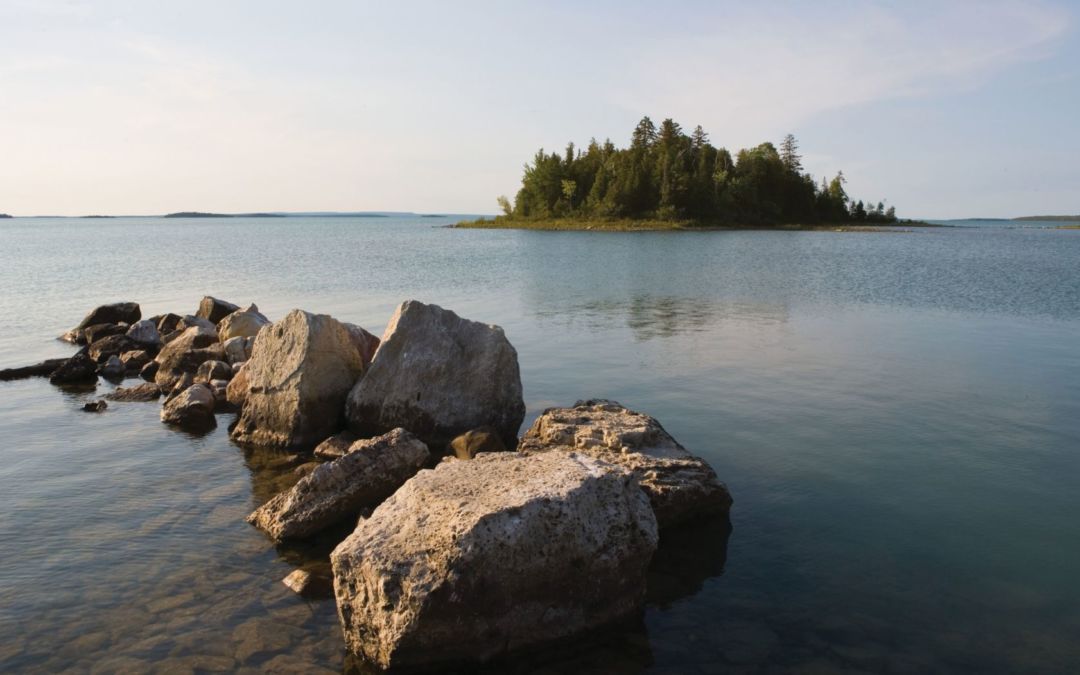 Mardi Jo Link writes about her annual Girls Night gatherings and about having her latest book (The Drummond Girls: A Story of Fierce Friendship Beyond Time and Chance) reviewed by her best friends. The essay was originally published in the June 2015 issue of Traverse, Northern Michigan’s Magazine.

When my best friends said that my next book should be about them, I panicked. Once I got my bearings, I tried to explain that trusting a writer could be dangerous to a friendship. Yes, our close-knit group did have a stemwinder of a story to tell, but that shouldn’t be the only consideration. The Drummond Girls met in the early 1990s at Peegeo’s Food & Spirits, and have since become something of an institution. We’re eight women who’ve been setting out for the wilds of Drummond Island every October for a quarter century. Which means there are eight stories about our friendship, not just one. What if they didn’t like my version?

At one of our monthly Girls Night gatherings I tried to illustrate this concept using the appropriate vehicle: A classic folktale. (I mean, everyone recites a folktale after having a couple of cocktails, don’t they?) Taking my inspiration from the Grand Traverse Distillery’s finest, I stood and summarized “The Girl and the Snake.” It’s the one in which a naive young thing is walking up a mountain, becomes charmed by a shivering rattlesnake, helps it down to warmth and safety, only to be bitten for her troubles. “You knew I was a snake when you picked me up,” the rattler says, before slithering away.

The girls said they didn’t see the parallel. Furthermore, I was a mullet-head if I couldn’t see the obvious: That I was a writer, that we had a story, and that my agent wanted a new book to sell. Duh!

From the moment I graduated journalism school, I have found it increasingly difficult to separate what is supposed to be objective writing—newspaper reporting, for example, or even investigative books—from my own life, my own experiences, my own opinions. There are some writers who say they can do it, but I am no longer one of them. By encouraging me to write a book about our annual escape, my friends were giving me permission to not only accept this reality, but to embrace it.

The plan for the book was made two years ago this very month. We are, of course, still going to Drummond Island. “Every year unless pregnant or dead!” was our group’s early motto; we’re now all of us well past childbearing years, so one can deduce the option still remaining for missing the trip. We’re also still having a monthly Girls Night, and at one such recent gathering I took a sip of my gimlet and stood to speak. It wasn’t a folktale that came out of my mouth this time; it was a cautionary announcement instead. I had copies of the completed manuscript. I passed them out, asked the girls to take theirs home, wait for a quiet moment, read it through carefully, and let me know their thoughts.
I didn’t exactly slither away afterwards, but I did brace myself for the wait.

And before I go any further I must explain that the eight of us use the word “girls” not in a belittling or negative fashion, but rather as the only descriptor for the love and joy we feel toward4 one another. When we are together, we are not women or ladies, we are girls. The ease we feel with each other can only be compared to the sweet and energetic friendships of our youth, when as girls we built forts, traded clothes, and bestowed upon each other secret nicknames.

The only place I feel that same sweetness today is when I am with the Drummond Girls; otherwise known to me as Juke Box Hero, Waheelo, Pool Shark, The Sheriff, Gamer, etc.
“Okay, here’s what we’re going to do,” Gamer said, when I’d sat back down after passing out the spiral-bound copies. “We’ll go around the table, take turns opening the manuscript at random, reading the first sentence we see, then closing the cover and going on to the next girl.” (There’s a reason she’s called “Gamer.”)

Which made me remember something else I love about all of them. The Drummond Girls are not much for quiet moments or for waiting.

Their review took the next two hours to complete. It might have gone quicker if not for a fact of human biology: it’s difficult to simultaneously breathe while being slayed with laughter and while being wracked with difficult-to-label emotions.

I’ve had my work reviewed before, by readers from publications as diverse as a newsletter about manure composting to The New York Times Book Review. And even my mullet-head understands that no matter what else I write, ever, this will forever be my favorite review.

Mardi Jo Link is the award-winning author of three true crime books as well as the memoir, Bootstrapper, which was optioned for film by the Academy Award–winning actress, Rachel Weisz. The Drummond Girls: A Story of Fierce Friendship Beyond Time and Chance, will be published in July.