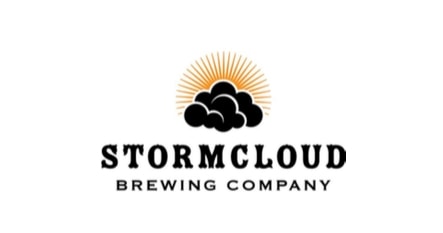 FRANKFORT: With beer cake, beer-can chicken and an outdoor beer garden, Stormcloud Brewing Company’s second birthday will be far from terrible. Stormcloud turns two years old on Sunday, June 21 and the northern Michigan brewery is celebrating the milestone with an outdoor birthday bash from noon to 11 pm at 303 Main Street, in downtown Frankfort.
In addition to being the second anniversary of Stormcloud’s opening day, June 21, 2015, is also Father’s Day. The coinciding events are even more reason to celebrate, and Stormcloud will honor its ‘Founding Fathers’ with the establishment’s first beer garden on the lawn next to the brewery. The beer garden will be the setting for live music and lawn games, in addition to Happy Hour specials for dads.
Since opening in June 2013, Stormcloud has become an award-winning brewery and well-received restaurant in downtown Frankfort. In its first two years of operation, the brewery has produced approximately 1,600 barrels of “Belgian Inspired, Michigan Made” beer, with Stormcloud’s flagship Rainmaker Pale Ale earning a bronze medal at the Great American Beer Festival in Denver last fall. Head Brewer and Co-owner Brian Confer is delighted with the recognition Stormcloud’s beers have received so far. “Bringing home a medal from the GABF in Denver is a big deal for us,” says Confer. “We are a young brewery located in a small city tucked into a quiet corner of northern Michigan. A national award of this caliber confirms the quality and integrity of our brewing and has enabled Stormcloud to reach a larger audience of beer enthusiasts.”
This spring Confer was voted one of the top three brewers in northern Michigan by the readers of Traverse Magazine and MyNorth.com. But Confer and his beer aren’t the only award winners at Stormcloud. This spring, Stormcloud received the 2015 Certificate of Excellence from TripAdvisor, the world’s largest travel site. The certificate was awarded for consistently favorable reviews on TripAdvisor from travelers who have experienced outstanding service and delicious food, in addition to great beer, while dining at Stormcloud’s pub.
Now open daily year round, Stormcloud Brewing Company has expanded from 22 employees in 2013 to 40+ current employees. Co-owner Rick Schmitt says the increase in Stormcloud employees is due to both the brewery and pub working to successfully keep pace with demand. “Our growth over the past two years is a direct testament to our quality of beer and food, popular pub atmosphere, and community involvement and events. We’ve worked hard to become a place where guests of all ages are comfortable and feel welcome,” says Schmitt. “And as we launch into our third year of business, we’ll continue to build upon our achievements in both the brewery and the pub.”
Stormcloud will toast those achievements during the company’s 2nd birthday party. Musicians performing at this year’s daylong celebration include Old Mission Collective, Achilles Tenderloin, Renee Herman, Blair Miller and Robbie Provo. Cloudspotters – Stormcloud’s membership club – are encouraged to bring their 2015 Cloudspotter card for access to members-only events.
About Stormcloud Brewing Company
Stormcloud Brewing Company opened in June 2013 just two blocks from Lake Michigan in the lakeside town of Frankfort, Michigan. A small brewery specializing in Belgian-style brewing, Stormcloud offers 16 taps in addition to a full menu of flatbread pizzas, small plate appetizers, soups/salads, charcuterie plates, and specialty popcorn.
###
Stormcloud Brewing Company
Belgian Inspired, Michigan Made
stormcloudbrewing.com