Nine and a half years ago, Sleeping Bear Dunes National Lakeshore set out with an audacious goal of creating one of America’s premier cycling/walking/all access trails, which would run 27 miles through the park. Park leadership knew they could never do it all alone and so they teamed up with like-minded groups. Park Superintendent Dusty Schultz called the process “extreme collaborating” today at the ribbon cutting for the most-recently completed section. Now the trail runs just over 13 miles—about halfway completed.

Nearly 100 people attended the event, proving once again the power of a good idea in attracting and growing a fan base. Many of the attendees were part of the collaborative team that made the trail happen. Friends of Sleeping Bear, TART Trails, Networks Northwest, Michigan Department of Transportation, staffers for senators and representatives and more.

One gentleman, in explaining the passion people feel for the trail and the dedication of the trail maintenance volunteers, said one day recently a notice went out to volunteers that a tree had fallen over the trail and needed to be removed. He was in Traverse City, drove out to the stated location with a chainsaw, and by the time he arrived the tree was already gone. “There wasn’t even sawdust on the trail by then,” he said. He estimates that 10 volunteers responded to the call. 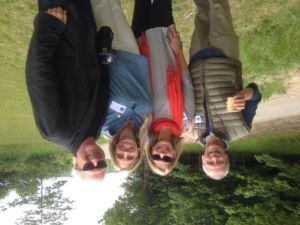 John Williams, a prominent Traverse City–based commercial photographer, co-founder of TART Trails back in the ’80s, and avid cycler, said, “People are always happy on the trail—you never see a pout.”

One frequently asked question is why did the trail turn to crushed stone instead of asphalt paving through the Port Oneida Rural Historic District. Brian Beauchamp, a TART Trails staffer, explained that park rules do not allow asphalt paving of trails in the historic district, but that asphalt paving will pick up again beyond the district’s eastern boundary. Beauchamp assures the surface should be fine for road bikes with skinny tires and that the surface should not cause flat tires for road cycles.

The upshot: riders can now pedal from just north of Empire to Port Oneida and back for a round trip of 26 miles with no cars. Nice!