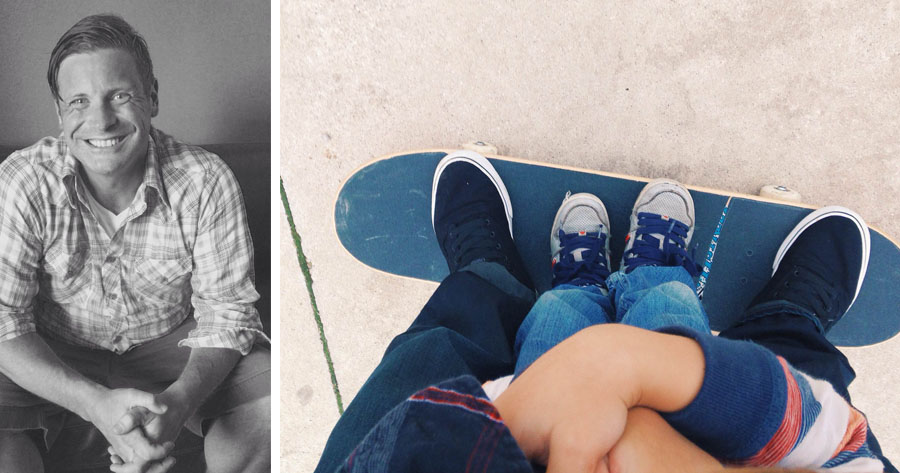 Once a hop plant has reached it’s maximum height, it shoots out sidearms to produce hop cones. This stage, when the plant begins to stretch out horizontally, is known as the flowering stage. As if designed by nature itself, life had a serendipitous way of branching out for Northern Michigan designer Jesse Den Herder.

Back in 2002—before the boomerang effect was too noticeable—Den Herder and his wife took a chance. They hit the road less traveled to live in the one place in the country they wanted to call home, Northern Michigan. Having studied design at Lansing Community College and marketing at Tulane University, the Lansing native was equipped with a “place-making approach,” and determined to create the job that he couldn’t find. “I worked all kinds of jobs doing freelance work and eventually I caught a couple really good breaks.” When the Dennos Museum Center approached Den Herder about collaborating to curate an exhibition that would highlight the art of skateboarding, and later when a fortunate turn landed him in the art director’s chair for Short’s Brewing Company, the flowering stage of the humulus lupulus was in full effect. Hops took on a whole new meaning.

MyNorth’s Dani Knoph caught up with Den Herder to talk design and skateboard culture. Read on for the full interview.

Dani: How would you describe your style?

Jesse: I really love mid-century design. I’m a fan of antiques. I like going to flea markets and looking at old packaging. I’ll think, “I can’t believe this was actually on the shelves at one time—it’s so beautiful!” Design was elegant. Type was used in ways it’s not used these days. A good example would be old Crowntainer beer cans. You can see how the product design, illustration and typography was built in harmony to be part of the whole.

Dani: Are there some mid-century designers who have stuck with you?

Jesse: I’m a huge fan of Paul Rand [American art director and graphic designer known for logo designs], Saul Bass [American graphic designer and filmmaker], and Charley Harper [American artist and illustrator]. One of my present-day versions of Charley Harper is a guy named Don Pendleton. He’s from Ohio, and he’s created some mind-blowing work over the years including the majority of board graphics for the iconic Alien Workshop skateboards. He just won a Grammy for the Pearl Jam packaging.

Dani: What other mentors helped to shape your career?

Jesse: Tony Magnusson was such a mentor to me in so many ways, like taking me on as this guy from Michigan. He founded H-street Skateboards back in the ’80s. He’d been able to take his professional [skateboard] career and leverage it into a business. I convinced him that I could work remotely with him out of San Diego. For about 6 years that’s what we did. I was traveling a lot, but I was still able to live up here and that’s how it evolved. That scene was building and selling the image of California. Going out there was beyond awesome, but I was such a Midwest guy. We’re still great friends.

Dani: So you joined the Short’s Brewing Company team as the art director back in December. Can you talk a bit about what it’s been like designing for Short’s?

Jesse: Short’s is such a great example of something born purely out of love and passion. Seeing the transition as it’s grown and being able to move it into a modern version of itself where it’s not changing but its more applicable to the growth—I love those challenges. We get to tell this amazing story by creating a visual language for it.

Dani: Your design work helped launch Short’s latest branch of the company, Starcut Ciders. What’s it been like designing for this new line of cider?

Jesse: It was interesting coming into the Starcut Cider project, and having a long creative leash to work with, and discover what that was going to look like as a separate brand under Short’s. It was really fun working on the Starcut identity because with any branding project you’re trying to encapsulate the present as well as the future, so we want to build something that represents us now but allows us to grow into it. You have to be thoughtful about branding up front and treat it as if it’s always going to evolve, because it is.

Since it’s a product of Short’s, of course we’re doing things against the grain, like bringing in amazing artists like Don Pendleton to illustrate some labels (stay tuned) and having a 1960’s Corvair as a delivery truck/brand vehicle.

Working with guys like Joe Short, Tony Hansen and the whole Short’s team—it’s such a labor of love and it’s so personal on so many levels. That’s where I want to be, with a company that gets it and has a personal connection.

Dani: And now you have an entire Short’s merch store that you get to work it!

Jessie: Yeah! Being able to work with the merchandise team at Short’s has been so fun. We really took that in a new direction. I’m so in love with it, but it’s been hard to digest for a lot of people, because it’s not just a logo. Other breweries seem to be looking at merchandise as a default to promotion, for example, you like our beer, here’s a shirt. But Short’s isn’t just about the beer, it’s about the experience. So our clothing and product have to be so rad that people come back to the beer! It’s unique. That’s what Short’s is all about. We set the trend.

Dani: Speaking of setting trends. You’re part of an impressive and cutting edge exhibit that is shining the light on skateboarding as an art form. Tell us about Sideways, the exhibit at the Dennos Museum Center.

Jesse: I had a small part in bringing this to Traverse City. Basically last year, the guys from Dennos got together and realized that they wanted to do a skateboard exhibit. They noticed how popular skateboarding was across the country, and they knew that beyond it being an annoying pastime that kids do in the parking lot, there’s a cult following. They saw the creativity, so they wanted to make it happen. My good friend Eric Campbell approached me about being part of the committee.

Dani: So Dennos approached you?

Jesse: Yeah, Dennos approached us. So I was like, “Yeesssss, alright! Now we’re talking!”

It’s amazing how it came together.

Fortunately, Aaron Draplin—one of the greatest designers, I think, in history—is a TC native. It’s a no brainer that he’d come out for this. Mike Blablac, probably one of the best photographers in skateboarding, world-renowned, he’s a Lansing kid—Michigan roots. Then we got another guy, Jason Abraham Smith. He’s done a couple things for Short’s in the past. He’s a skateboarder and an awesome guy. We brought him in and then one of my good friends, Ron Allen, a professional skateboarder. He’s one of the true OG’s of street skating. He tours across the country doing jazz hip-hop. So these heavy hitters in skateboarding and art are coming together for this exhibit.

Dani: When does it start?

Jesse: The exhibit runs May 31st to September 6th, but the 19th and 20th of June are the heavy days of programming [the Park Jam and After Party is June 20th]. Aaron Draplin will be giving a talk. Ron Allen will be doing a performance and judging the competition. The Dennos received 80+ submissions for deck designs. So we’re encapsulating all of these different art forms within skateboarding—which is beautiful: design, fine art, music, and skateboarding itself. We’re hitting on all aspects of skateboard culture, exposing it as a true art form and then injecting it into the community.

If people have tickets and they’re going, they’re going to be blown away by what they see. I can’t wait to see the expressions on people. What a great way to start the summer. I feel so blessed. At the end of the day, TC will be better because of it.

Dani: How has skateboarding influenced your life?

Jesse: It started out around age ten. Skateboarding has always influenced my tastes, music-wise, art, it’s always there. So a funny side story… our kids go to Lakeland Elementary in Elk Rapids and last year I was in San Diego. I always skate when I go on these trips with Tony Mag. I wrecked my wrist. I remember returning and having this wrecked wrist. I was talking to some dads and they asked me how I hurt my wrist. I said, skateboarding. They were like, “Skateboarding? What’s wrong with this guy?” I thought, should I be embarrassed that I still do this? So I talked to my dad a week later and I said, “Dad, do you think it’s really dumb that I’m still hanging on to this childhood dream? Should I just chill?” and he looks at me and says one of the coolest things my dad has ever said. “Don’t ever stop going hard. I would be mad if you stopped.” Instead of saying “Just grow up!” he told me he was proud. He said, “You’re still loving what you do.”

Jesse: Always go hard. That’s the way I always want to live. Whether it’s work, family or design, let’s go hard with everything. ..and Joe Short is going hard!

Dani: It’s interesting, too, how people are more willing to buy into experiences and lifestyles.

Jessie: Absolutely. People have a lot to say about the Millennials. This idea of social good is something that the Millennial generation is so in tune with, and sustainability. We have these beautiful resources that aren’t going to be around forever if we don’t take care of them. I was so taken aback by a recent Glacial Hills Day at Short’s when all these young rad employees from the company came out to help make a trail beautiful. It says a lot about living a lifestyle.

I love that DIY mentality. Not having a lot growing up, we had to figure stuff out. We had to figure out a way to make it work. If we wanted something, we made it. With work, too—if the job doesn’t exist, I’m going to go create it. I could be bummed, and complain for the next 20 years about how I live in the place that doesn’t have what I want, or I can go out and figure out how to do it. One of my favorite quotes is from Winston Churchill. He says, “Success is going from failure to failure without losing your enthusiasm.”

Dani: It goes back to what your dad was saying. Don’t stop!

You can find out more about Short’s Brewing Company and Starcut Ciders here. 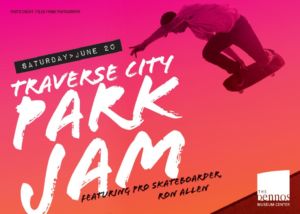 Park Jam After Party
Jun 20, 2015 from 7:00 PM to 9:00 PM
Dennos Museum Center
Get decked out in a whole new way for the Park Jam After Party. Enjoy a strolling dinner with Starcut Ciders and Short’s beer; catch a performance by Ron Allen, AKA MC Intelligence; bid on exclusive art and support programming at the Dennos and Third Level Crisis Intervention Center; all while enjoying the exhibition, Sideways: Exploring Skateboard Art + Culture. Ages 21+