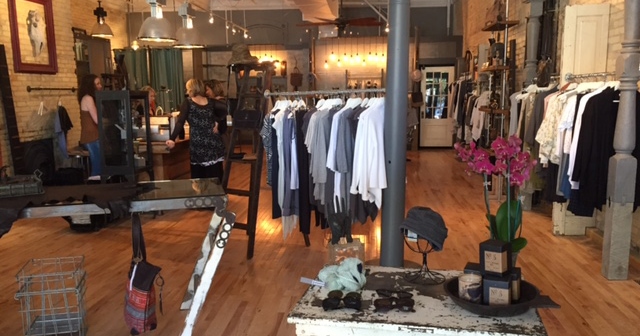 Eleven, a clothing store in downtown Traverse City officially opened its doors at 156 East Front Street on Monday, June 1st at noon. The name Eleven was a result of the two owners, Dawn Campbell and Jill Anton, who both realized that “eleven is an important number” to them.

Although it’s a brand new store to downtown, owners Dawn Campbell and Jill Anton aren’t strangers to the world of retail. For the past seven years Dawn Campbell has owned Boutique a La Vie in the Mercato, which she recently closed to open Eleven downtown.

She says that she loved having her space in the Mercato but that it was time to change things up.

“My favorite thing so far about this location is the energy of downtown,” Dawn says.

During most of May she and her team worked on remodeling the former Cherry Hill Boutique location. They removed the drop ceiling to reveal the original tin ceiling and removed the painted walls to expose the original brick. The wood floor was left the same. At the end, the total remodel “opened it up in here” Dawn says.

The open floor plan has made room for new clothing lines such as Porridge, Nau, Waltzing Matilda and more. Dawn says she is excited to be offering a selection of men’s clothing now, in addition to women’s clothing, shoes and accessories.

Although they have only been open for a week, Eleven has already received some positive feedback from the community.

“A customer came in here yesterday and told me, ‘I feel like I want to sleep in here tonight,’” Dawn says. “ The space is really inviting.”

Eleven is open Monday—Thursday from 10-7, Friday and Saturday from 10-8 and Sunday from 11-4. Summer hours are coming soon.

The Grand Opening Party for Eleven will take place on Saturday, June 27 from 5-9 pm. The public is invited to come and check out the new place.