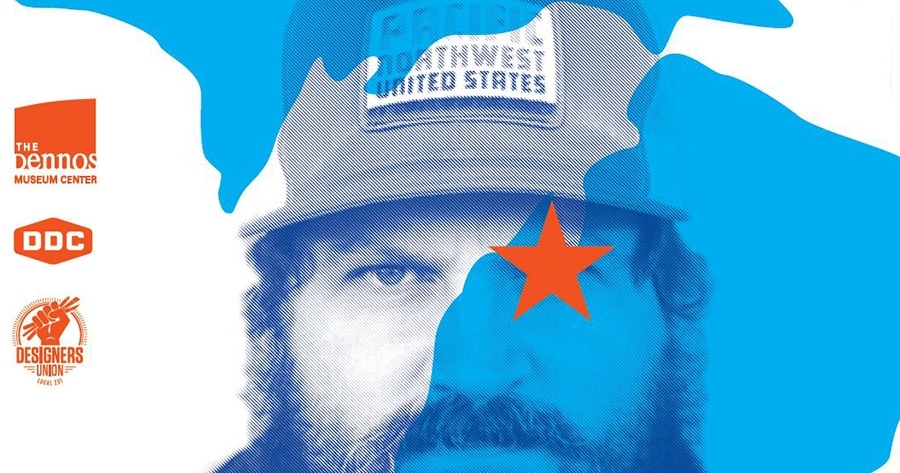 When it comes to design, Michigan native Aaron Draplin likes to keep it simple. “Work hard, Do good work. For good people.” With a growing list of standout clients that includes Patagonia, Burton Snowboards, Woolwich, K2 Snowboards, Target, Lib Tech, Nike and the Obama Administration—that’s right, the Obama Administration—what Draplin is capable of is far from simple.

As the founder and sole proprietor of Draplin Design Co., located in Portland, Oregon, Draplin has garnered a reputation across the country as a graphic design celebrity. This weekend he’ll reconnect with his Michigan roots in conjunction with the grand opening of Sideways: Exploring Skateboard Art + Culture, at the Dennos Museum Center in Traverse City. MyNorth’s Dani Knoph caught up with Draplin to talk about growing up in Northern Michigan, what Sideways: Exploring Skateboard Art + Culture means for Northern Michigan, and why you can’t miss his talk Tall Tales from a Large Man.

Dani: So you grew up in a small town, Central Lake, Michigan, and you studied at NMC and the Minneapolis College of Art and Design. Now you operate one of the most outstanding graphic design companies in the country out of Portland, Oregon. Let’s go back to your roots. Can you talk about what it was like to grow up in Central Lake.

Aaron: Up until about 12, everything was incredible. Summers on Intermediate Lake, Torch Lake and Lake Michigan, little league baseball and playing in the woods. You know, cool small town stuff. But at 12, I saw the divide happen between the cool kids and the rest of us. And I tried to be in the popular category, to lackluster results. I discovered freestyle BMX bikes and then skateboarding. I messed with that a bit. But, I’m so thankful I made the choices I made!

Dani: What in Northern Michigan had a profound effect on you?

Aaron: The beauty. We are so lucky to have grown up in such a beautiful place. I realized this right after I split in 1993. I fought so hard to escape and got all the way out west and realized the beauty I left behind. Very thankful for those sand dunes, the woods, lakes and even the molehills of Northern Michigan childhood.

Dani: Tell us about the skateboard exhibition at the Dennos Museum. What does Sideways: Exploring Skateboard Art + Culture mean for Northern Michigan?

Aaron: There goes the neighborhood. And I gotta tell ya, if the Dennos never put skateboarding and snowboarding stuff in there, well, we’d all still be fine with it. See, it’s always been a little secret. So to see it in there, with, uh, like “real citizens” looking at it? It’s surreal. It makes a leap from “us” to ‘everyone else’ and that comes with nervous jitters. You have to understand, I’ve been kicked out of the Dennos parking lot for skateboarding in it.

Dani: Did you skate growing up?

Aaron: Sure did. Started in 1986 and it took one slam in Las Vegas in 1997 to make me reconsider my devotion to it. My elbow still hurts from that fall in that drainage ditch.

Dani: What do you hope people will walk away with?

Aaron: Just a little glimpse into the creative, self-sufficient and vibrant world of skateboarding and snowboarding culture. You have to understand, I’ve had buddies arrested for skateboarding. No one’s been arrested for playing football, you know? And because of that, we developed a thick skin and an attitude we knew we’d have to make our own world of. And we did.

Dani: The list of clients you’ve worked with is mighty impressive. What is it that sets Draplin Design Co. apart?

Aaron: The ability to work just as hard on the big gigs as I do on the scrubby little things. I can’t tell the difference between the two these days. Well, aside from a paycheck showing up in the mailbox. I love both equally.

Dani: The talk you’re giving on Friday, Tall Tales From a Large Man, “delivers a sucker-punch of a talk that aims to provide bona fide proof of work, the highs and lows of a ferociously independent existence, and a couple tall tales from his [your] so-called career in the cutthroat world of contemporary graphic design.” Give us 3 reasons why we can’t miss this talk.

01. To see something go down that probably shouldn’t. Things could get weird.

02. It’s a fun talk. Design usually isn’t fun. I’m trying to make this stuff fun for everyone who sees my show. Especially, the youngsters. When I started, all these old windbags made it sound so, uh…un-fun. And it scared me.

03. I might’ve delivered you a pizza from Crusted Creations in 1989. Is that a reason?

Dani: We don’t need more reason, we’ll be there. Aaron, big thanks for taking some time to talk with us. We are stoked for Sideways! 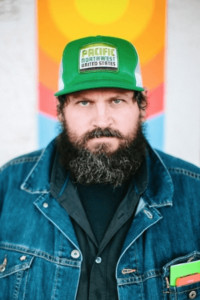 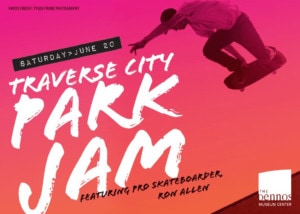 Park Jam After Party
June 20, 2015, 7:00PM – 9:00PM
Dennos Museum Center
Get decked out in a new way for the Park Jam After Party. Enjoy a strolling dinner with Starcut Cider and Short’s beer; catch a performance by Ron Allen, AKA MC Intelligence; bid on exclusive art and support programming at the Dennos and Third Level Crisis Intervention Center; all while enjoying the exhibition.