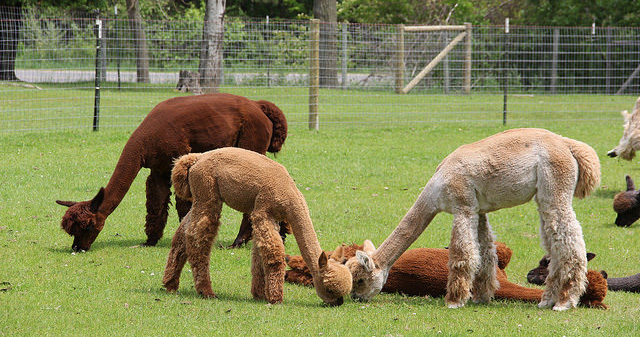 Tucked in between Frankfort and Benzonia is a 145-acre haven, Crystal Lake Alpaca Farm.

As you pull up the drive, you’re greeted by green pasture, a freshly painted red barn and Naomi and Banner – the Great Pyrenees who guard it. The family farm is home to Chris and David Nelson and nearly 40 alpacas.

“We’ve had the alpacas for about 12 years,” Chris says. “We went to a friend’s alpaca farm, and we instantly fell in love. We have a sign on our pasture that says ‘caution they will steal your heart.’”

Walking through the pasture, Chris calls each alpaca by name. Sophia, Cocoa and Velvet Mistress are a few of the females in the herd. The newest members to the family are Lexi and Crystal Pharaoh, who were born on May 13 and June 2. Chris is expecting three or four more to be born in June.

Though visitors aren’t allowed in the barn or pasture, you’re invited to visit the farm and relax on a bench while watching the alpacas. On nice days, Crystal Skylar is brought down from the male barn and likes to be pet.

In the U.S., alpacas are raised for their fiber, which is spun into yarn for clothing and other products.

“(The fiber) is just unbelievable,” Chris says. “It’s strong. People actually take the fiber in South America and make rope out of it and bind bridges together.”

People visiting the farm can feel the fiber in the Alpaca Boutique, which is starting its fourth year.

“I had a little boy come in the other day and he picked (a teddy bear) up and he said, ‘I just touched heaven,’” Chris says.

The boutique is located in the barn across from the pasture. The money made from the shop goes right back to the farm and is used to buy feed and make repairs.

Learn more about Crystal Lake Alpaca Farm online or on their Facebook page.