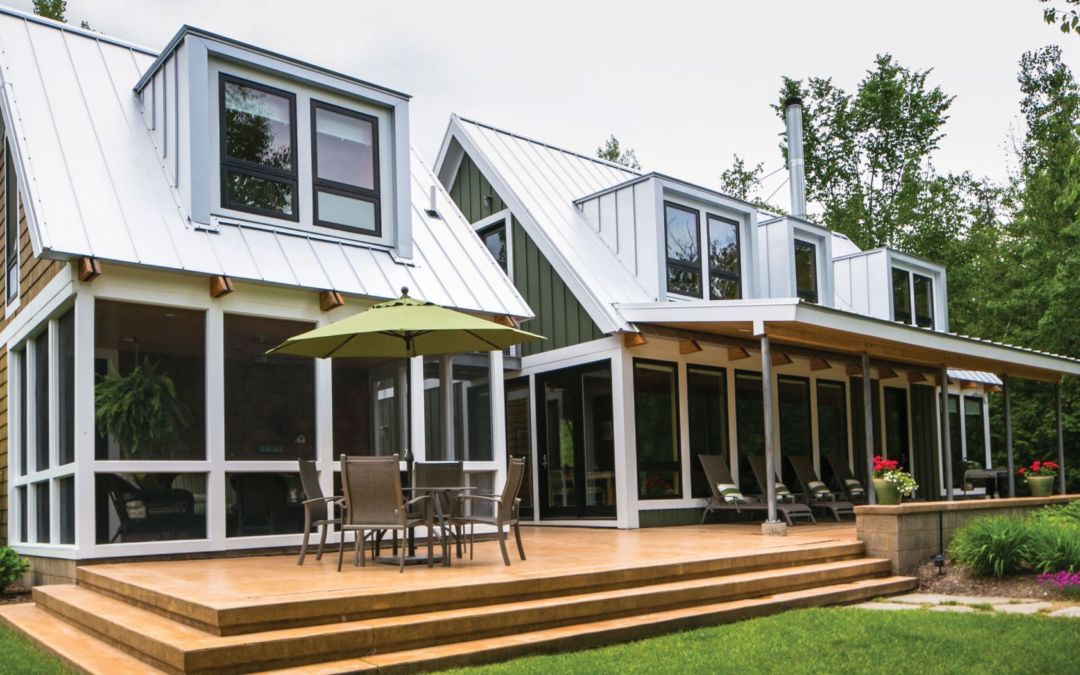 A not-so-large but very well–planned cottage on Little Traverse Lake near Lake Michigan proves that living lightly is the most relaxing lifestyle.

This home is featured in the June 2015 issue of Northern Home & Cottage, a bi-monthly home publication included in all subscriptions to Traverse, Northern Michigan’s Magazine. Subscribe to life Up North. 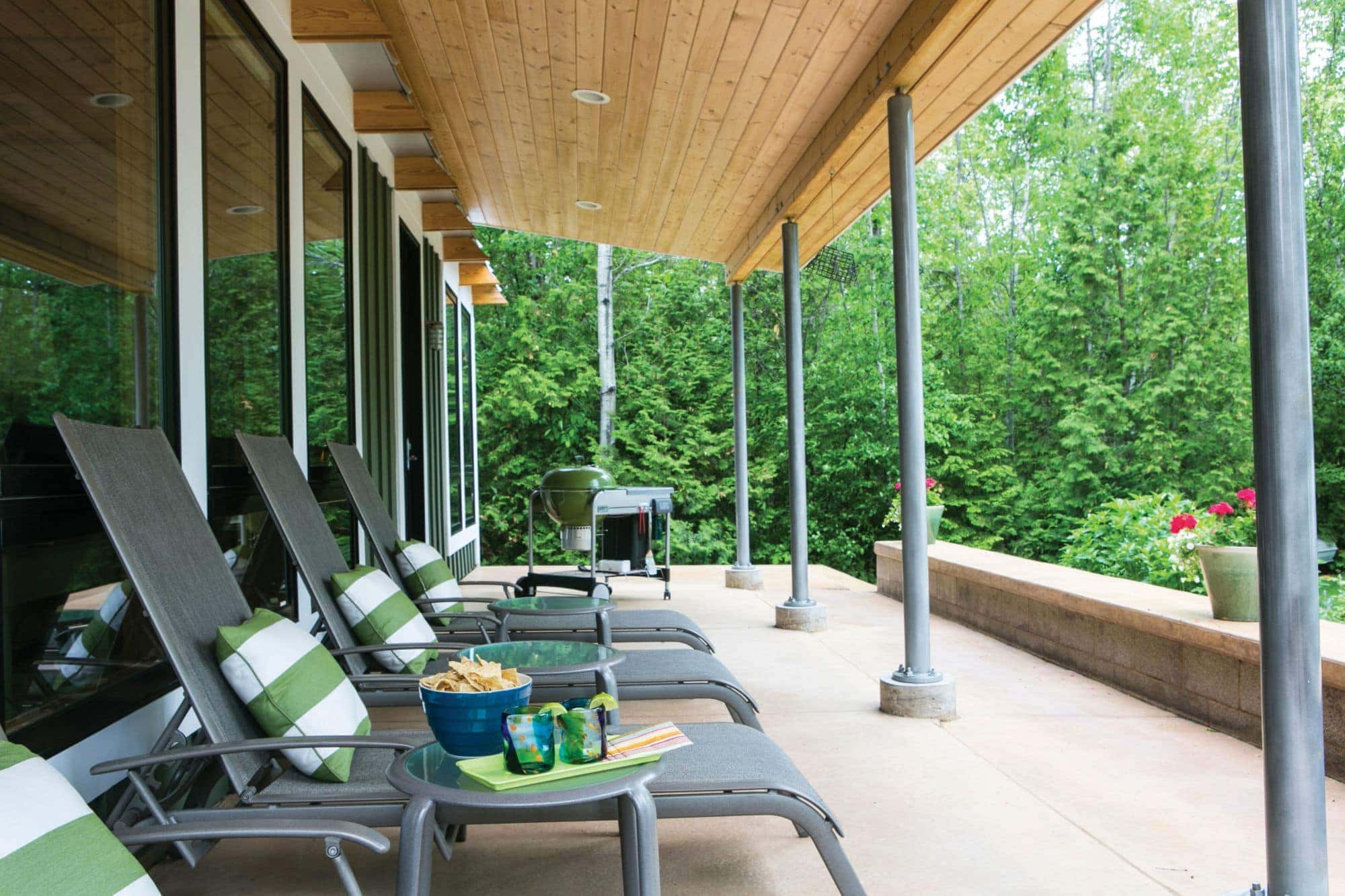 When Scott and Jane Siegel’s family and friends join them at their second home on Little Traverse Lake (the couple is especially excited about this year’s Fourth of July gathering) they will enjoy a quintessentially Up North experience—bonfires, days on the water, coffee with the sunrise and all of the other traditions of Up North life at the lake.

The vacation staging area will be the cottage that the Siegels designed and built several years ago along the shores of the 640-acre lake in Leelanau County, not far from Lake Michigan. And that is a treat in itself. Life at the cottage is simple, serene and relaxing—qualities that belie the precise thought, design and green construction that went into it.

The Siegels, who live most of the year in Ada, near Grand Rapids, purchased the wooded three-acre lot in 2000. Over the next seven years they trekked north whenever possible, sometimes camping on their property, while they decided what sort of home they should build. Back then the property was marked only by birch trees, a two-track that the couple believes was once a logging trail, and a clear, swift-flowing creek where watercress grows. 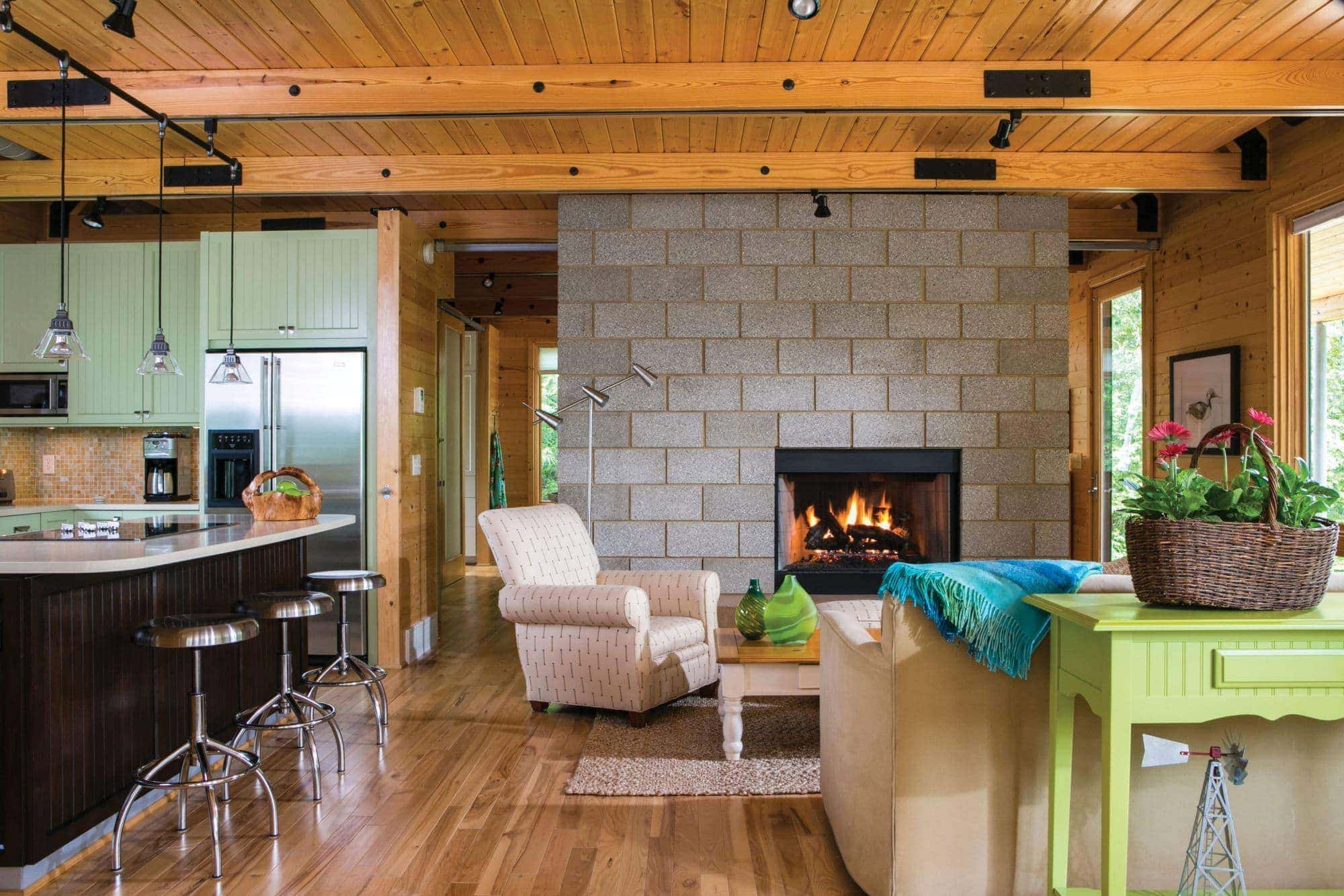 Scott, whose background is in industrial design (Jane teaches at Valparaiso University Law School), was particularly vested in the visioning. “Scott did a tremendous amount of work himself … there was a lot of thought and love that went into this,” Jane says. The couple knew they wanted a low-maintenance, green-built home with a modest footprint—one that would be in scale with the older cottages that ring Little Traverse Lake.

Working with architect and friend Mike Corby of Grand Rapids, the couple finally broke ground in 2007 on the home that fuses a Michigan-cottage aesthetic with hints of an industrial vibe: think cedar shake siding, post-and-beam structure, and knotty-pine walls with a metal roof, some exposed ductwork and a minimalist clean-lined hearth. With sprayed insulation foam in the walls and 8” SIPs (structurally insulated panels) in the ceiling, Scott estimates that they save 35 percent on the cost of heating and cooling over what the cost would be if the cottage were conventional construction. 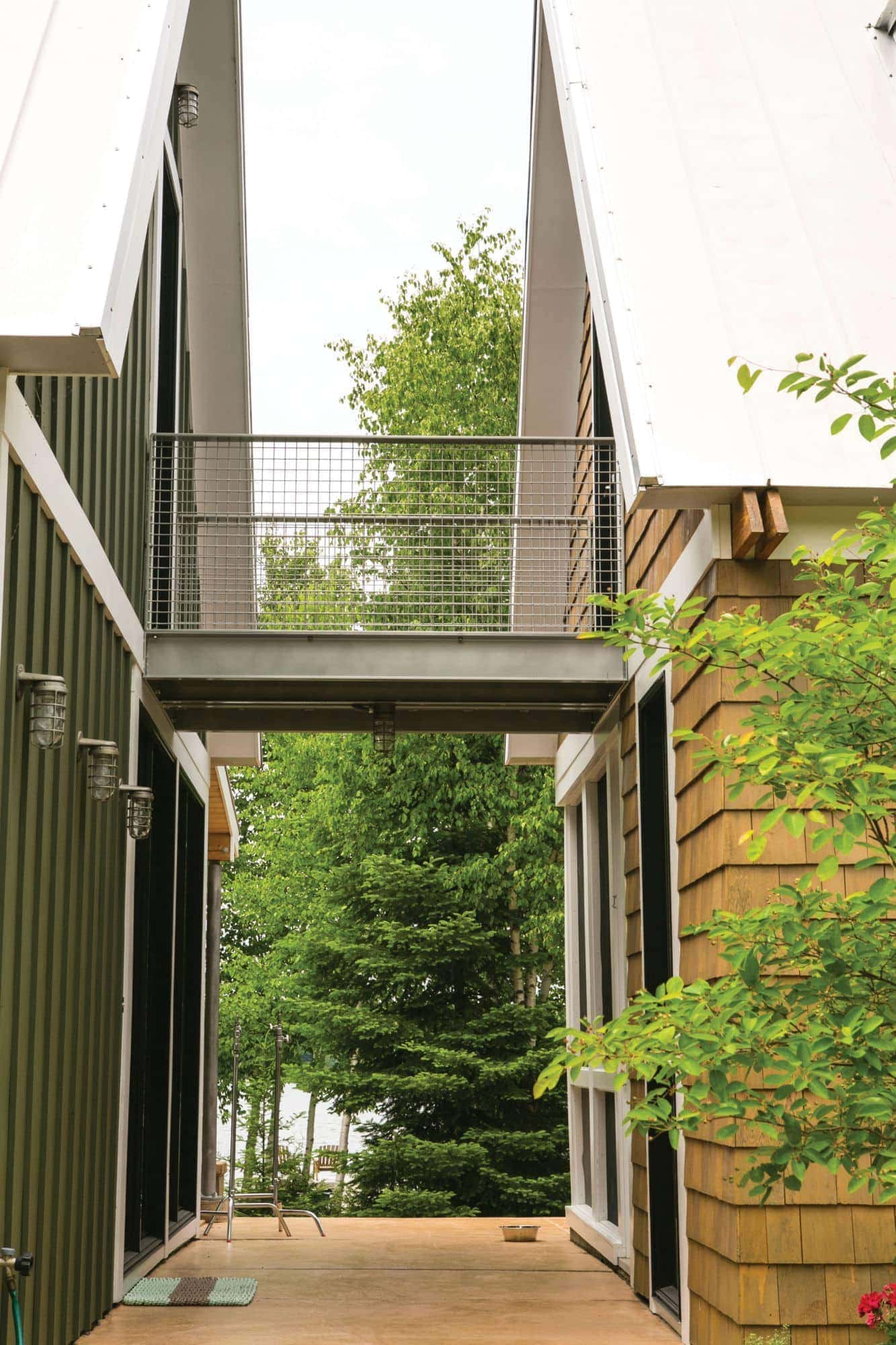 The four-bedroom, three-bathroom home sleeps 12 to 14, yet it measures just under 2,000 square feet. “We did make it small, but it lives large,” Jane says. The plan revolves around two separate structures joined by a dogtrot—the Southern term for a breezeway. The dogtrot connects the guest quarters with the rest of the home while creating an expansive feeling and framing the view of that birch-lined shore.

No-fuss, relaxed cottage décor was important to the couple. While they bought some new furniture, they also found “true cottage-like” treasures at flea markets and garage sales and installed practical amenities, such as a drainboard sink in their kitchen. 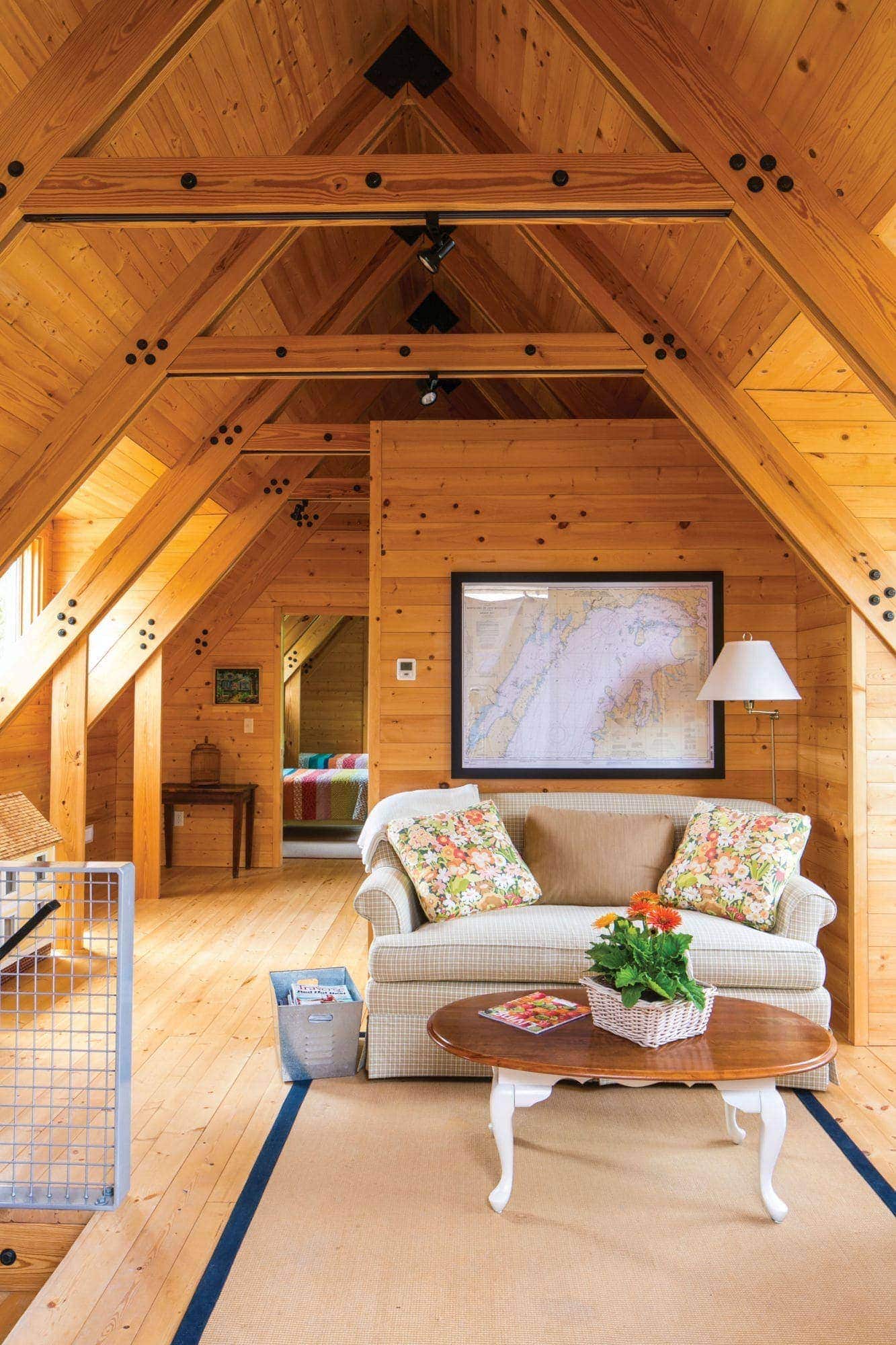 Scott and Jane come north as often as they can, and when possible, their two grown sons join them from their respective homes in Chicago and Portland, Oregon. Even when friends join them, the cottage never feels crowded. And given the structure’s minimal interference with its wooded setting, the site is peaceful and relaxing.

“Unfortunately people think you need to build big to accommodate your family,” Jane says. “But to build a summer place that fits the bill but is not huge … it feels good.” 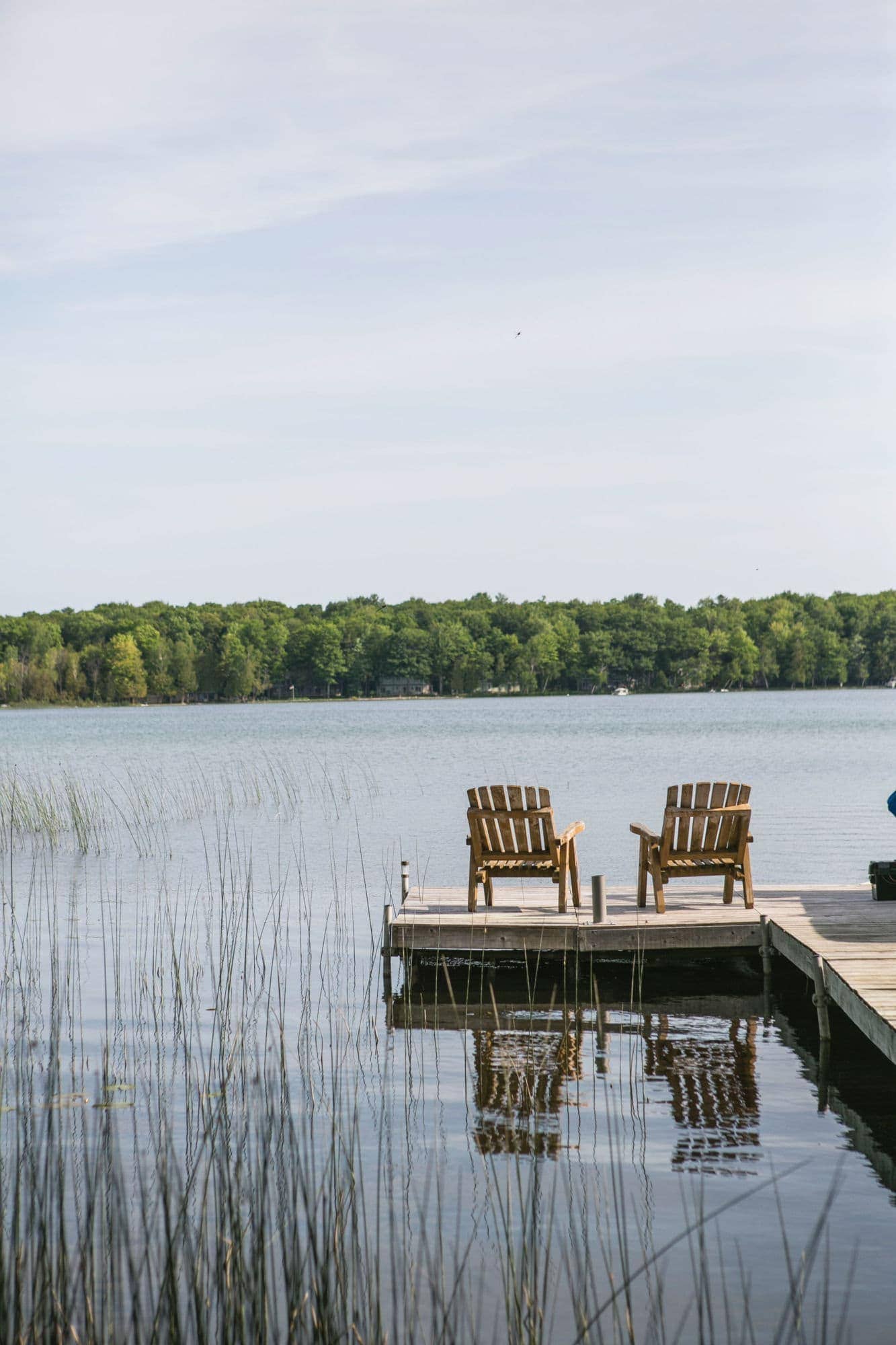 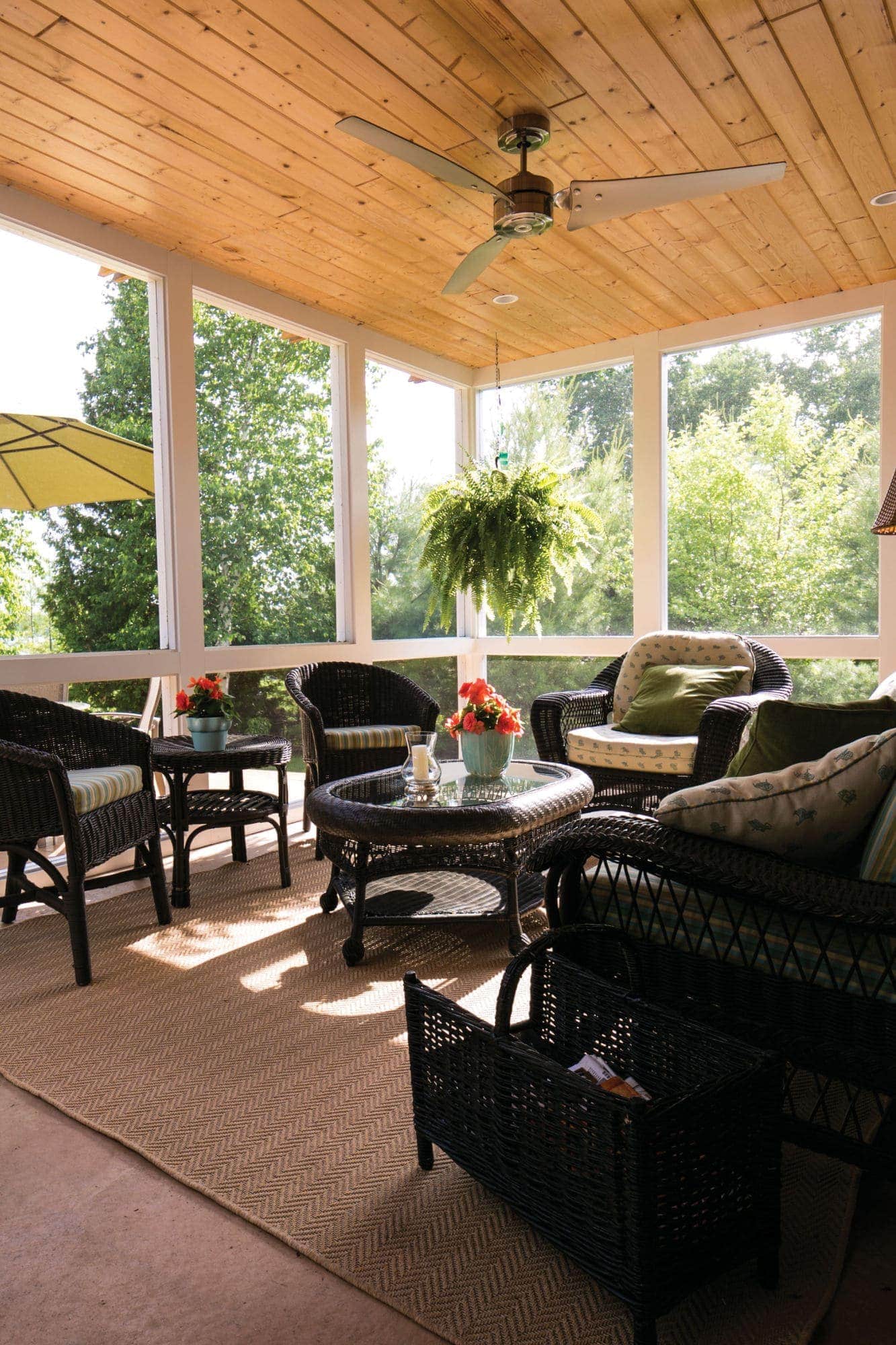