What Makes You Come Alive? Interview with Chelsea Bay Dennis of Fulfillament 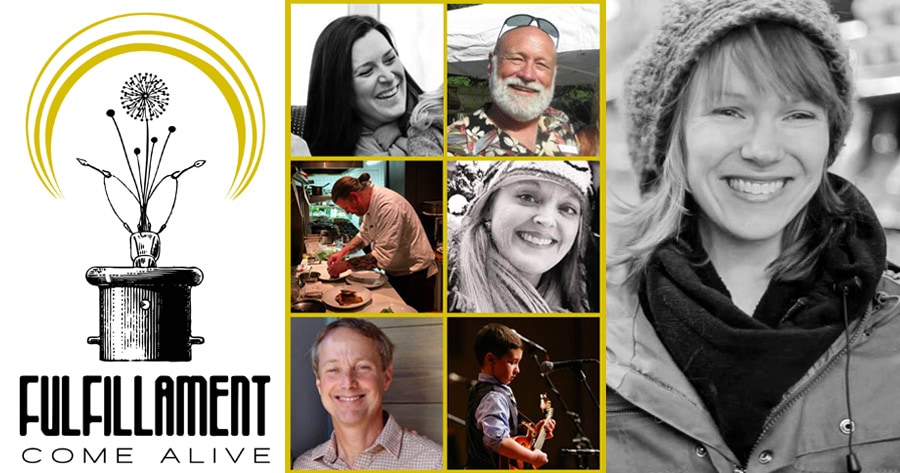 On May 7th, five extraordinary Northern Michigan business leaders took the stage in Traverse City to serve up 5 inspiring stories. To learn about how Fulfillament got started, what it means to be a conscious entrepreneur, and get the backstory on the speakers, MyNorth’s Dani Knoph caught up with the brilliant mind behind it all, Chelsea Bay Dennis—who encourages people to discover what makes them come alive.

Dani: Chelsea, what inspired you to start Fulfillament?
Chelsea: I was a college student who had a desire to make a difference in the world and be an artist. My way to do that was through design over the past 13 years. During my course of design I’ve been able to meet with tons of entrepreneurs, farmers and creative people all over the world who have taken a risk to be the ones they’ve been waiting for. I’ve seen firsthand that when we do what makes us come alive and what makes a difference in the world, we love life.

In addition to design, I offer coaching & consulting for individuals looking to create or find meaningful work: from the inside out. Since working with good-for-the-world entrepreneurs, I’ve wanted to do something beyond the one-on-ones, to inspire people to love what they do. I’m working with people individually but I want to inspire more people! I thought, there has to be a way to inspire more people than just one at a time. Fulfillament is my way to do that.

Dani: What exactly is a conscious entrepreneur? Break it down for us…
Chelsea: Conscious Entrepreneur is the name of my coaching and consulting business. For me conscious means being aware of and being intentional with what you do and who you impact. Conscious means good-for-the-world.

Dani: Can you speak to a particular person in your life who really inspired you and made you come alive?
Chelsea: One inspirational person in my life was a man who started a Fair Trade olive oil company in Palestine. He grew up the son of a farmer of eleven kids and saw his people being oppressed and some became refugees. Their land was taken away. He was going to school in the United States where he found out about Fair Trade. He turned around and said, “this is what my people need!” He called up Equal Exchange and they said, “Great idea. We don’t have the standards for it.” He could’ve quit right then and there, but he didn’t. He said, “alright, I’m going to work to create the standards for it and I’m going to make this happen.” Today they have well over 2,000 farmers who get paid a fair wage for doing the work they’ve done for thousands of years. They were losing money to create their olive oil just ten years ago! He was the person he was waiting for. He was truly inspirational for me.

Dani: How did art and green design get you to Fulfillament?
Chelsea: I knew I was an environmentalist because I grew up camping and canoeing with my Dad up here, but I was always an artist and I had no idea how to combine the two. When I was in the art school at UofM I met Food for Thought’s, Timothy Young who was doing his organic jams and Jody Hayden who is an upcoming Fulfillament speaker. Jody was working part time for Food for Thought because when you start a company like Higher Grounds, you can’t just do it out of the blue, you have to have another job to pay for it. So she was working part time there and she taught me what Fair Trade was, because she was rooting her new business in it. This was around 2000, before Fair Trade was really big and as soon as I heard about it, I just knew that’s what I was supposed to do. I found that I could use art and design for Food for Thought and Higher Grounds Coffee and right then it clicked! I found that I could use art and design to help companies and people do good! Design has a power to educate and make change, and really is a bridge between an awesome mission and the people it needs to reach.

Dani: The first Fulfillament was a hit! Can you talk a little bit about the upcoming Fulfillament on May 7th.
Chelsea: So, this is the second Fulfillament. After the first one in January, people were just buzzing. They didn’t want to leave. At the very end of it I asked the audience, do you want to see this happen again? The response was huge! As I started to ask who was going to speak at this Fulfillament it became clear that it’d be fun to have themes. So, this is the Food Fulfillament, and it focuses on how people have found fulfillment in their work through food.

Dani: So, for the second Fulfillament can you tell us a bit about these 5 business leaders?
Chelsea: In this case they are all individuals who have created a good impact on the world through food. We have Eric from the Cooks’ House. He created something out of a teeny tiny place on Front Street that can only sit I don’t know, 10 people…

Dani: Similar to how Georgina’s started?
Chelsea: Yes, they were in the same spot! That spot is like an incubator. Eric is one of the most passionate and dynamic people I know. He loves investing in his local community by purchasing local foods.

Jody Hayden is the co-founder of Higher Grounds Coffee and now the owner of Grocer’s Daughter Chocolate, and she’s always been committed to high quality products rooted in Fair Trade farming. She makes sure that the people producing the chocolate or the coffee are getting paid a fair wage and being treated equally. She’s a gem…and a new mom!

We have Timothy Young who has been running Food for Thought since 1995 and he would say he’s not in the business to make fabulous jam—he’s in the business to make a difference. He throws non-waste events, celebrating local food. He’s really involved with local farmers as well as organic farmers. He runs across countries, too! He’s run across Ethiopia. He’s run across Palestine, he is about to run across the Congo—he runs to donate money for making the world a better place. His whole family is in the production facility all the time making jam. Food for Thought specializes in preserved foods like salad dressings, pickled foods, jams. They’re based in Honor.

We also have Allison Beers of Events North. She organizes events but most all of it always involves food, so she works directly with Cherry Capital Foods and other local producers that root her events in the local community. She’s a powerhouse!

Evan Smith is an intrapreneur. He used to work with Timothy Young as a partner. At Cherry Capital, Evan was hired on a number of years ago and now he is the face of the company. He also travels the world speaking about foodshed systems and how to get local food into schools and institutions.

Then we have Nick Carmen. He’s this 9 year old musical genius from Suttons Bay who can play any string instrument you put in front of him. He’ll play 3 times throughout the evening.

We thought we could pick a non-profit and put proceeds there, but it is more in line with our mission to take our proceeds and actually give a grant to someone in the audience who  is fulfilling and impactful on our community, but needs a jumpstart to get moving.

Dani: Is there a third Fulfillament in the works?
Chelsea: It’ll be two or three times a year. So the next one will either be in September or January. The theme could be music, art, intrapreneurs…there are so many ways to go about it! There’s a lot to look forward to.

Dani: Any advice for the audience?
Chelsea: I totally believe in starting before you’re ready. Don’t wait for it to be perfect. Just go for it! If you wait for everything to line up and be perfect, you’re not going to do it. So, just go for it.

You can find out more about Fulfillament and the Conscious Entrepreneur here.