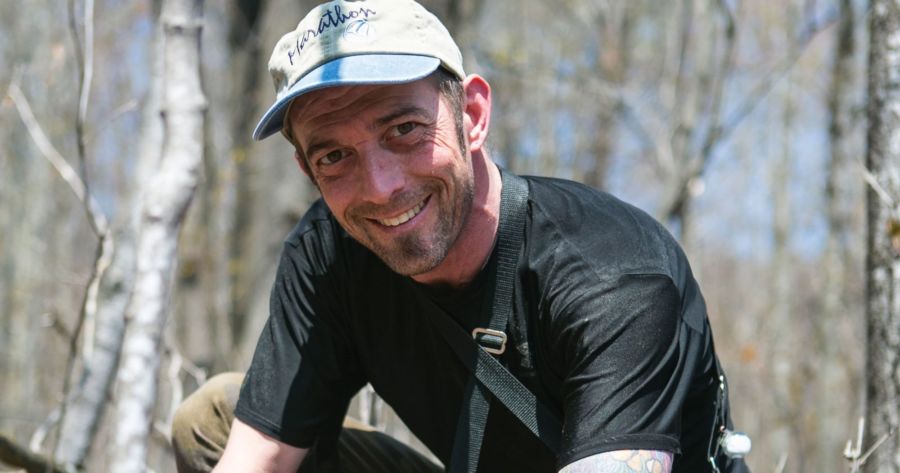 Carrie Tebeau heads into the woods with the North’s most renowned morel mushroom hunter, Ken Harris, to see what he’s doing that the rest of us aren’t.

This article is featured in the May 2015 issue of Traverse, Northern Michigan’s Magazine.

Clouds of dust rise up to the windows of Ken Harris’s SUV as he steers it down a narrow two-track through the woods. Branches, laden with just-born spring leaves, reach over the rutted path and make a tinny whine when they scrape the sides of the vehicle. Ken isn’t content just looking out his windshield, though—his head leans out the open driver side window, his eyes scanning the rolling hills swelling beside the road. “Yep,” he announces suddenly, authoritatively, and with a quick motion of his right elbow jerks the car into a makeshift parking space between trees. A satisfied half-smile tugs the corner of his mouth.

Outside in the fresh forest air the pungent smell of wild leeks rises from the earth. A chickadee trills intermittently into the silence of the springtime woods, but Ken doesn’t pause to let the peace of nature wash over him. Already he’s unloaded his gear: two mesh bags with a rectangular wicker basket set in the bottom of each. He hitches a jackknife to his belt loop and with a practiced motion tosses the strap of each bag crosswise over his body so his hips are framed by the baskets. A friend, who is also headed out to morel hunt today, rings Ken’s cell phone to ask directions to a particular, promising patch of forest. Even shouting over the crackling dissonance of poor reception, Ken is precise, a good explainer—“go west, so turn right from where you are. The turn’s a mile past the next bend in the road.” It’s as if he were reading a map, but he’s guiding his friend through the woods, a place he knows so intimately he can give directions without any concentration. As he speaks, Ken’s eyes rove over and over the earth. He paces the leaf-littered ground, impatient to begin the hunt.

Ken is a regular sight at many of the farmers markets in Northern Michigan, selling foraged mushrooms of all sorts. He runs a business called Michigan Mushroom Market, something he says happened by accident. “I was playing a pick-up game of soccer,” he explains. “I brought a pound of mushrooms for a friend to try. She was like ‘do you ever do farm markets?’ and a few calls later, there I was, standing at my table at the Petoskey market, no mushrooms left and money in my hand, and I thought, Okay, I’m doing this.” 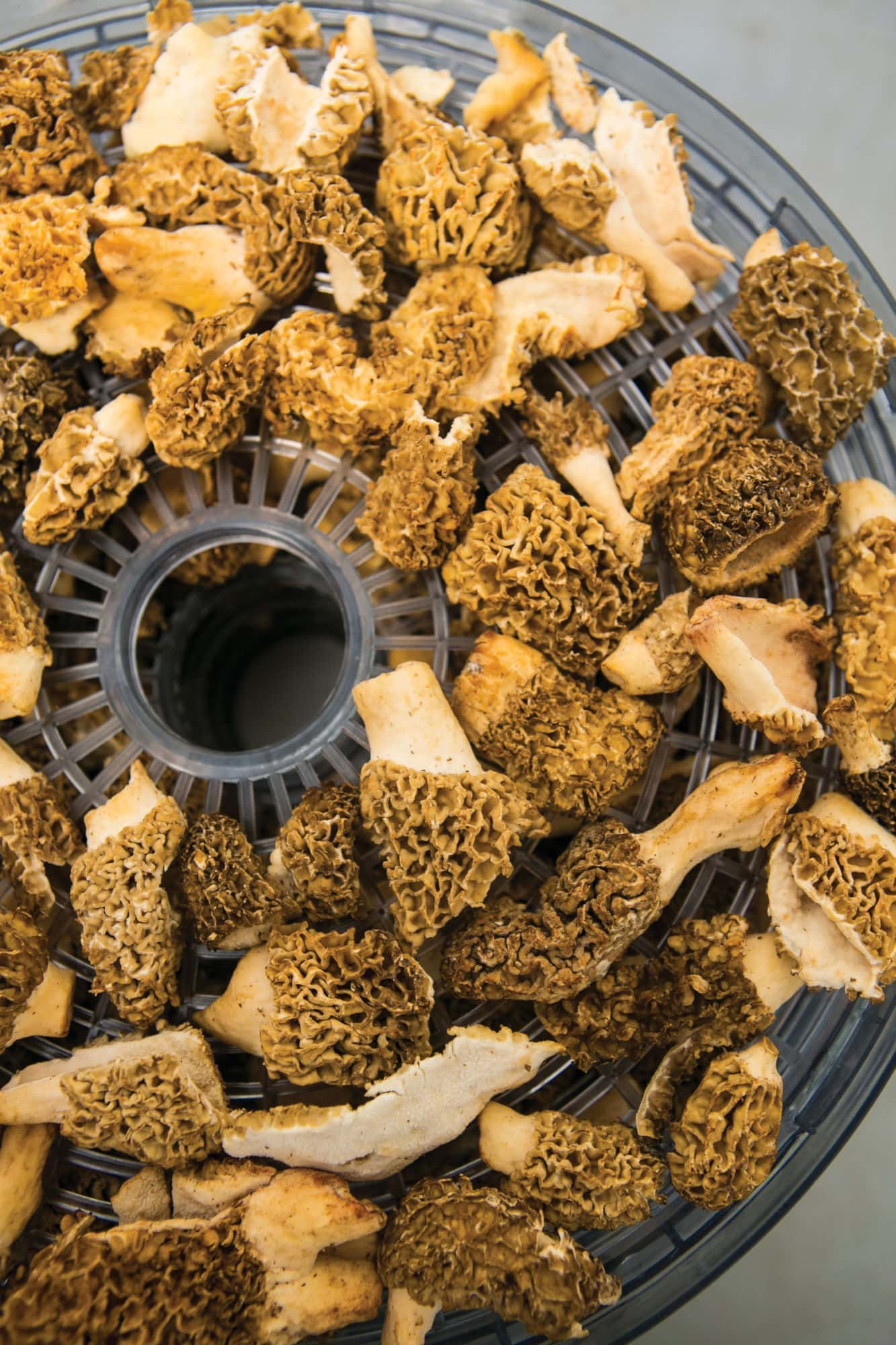 Out in the forest, Ken moves like a deer, lithely leaping over fallen logs. You might think that a forager would slowly and methodically scan the ground for mushrooms, but Ken has been at this a long time. He strides at a pace that’s just shy of a run, his beat-up hiking boots lightly scuffing the hillside surface of fallen leaves. “I don’t need to look where I know there aren’t mushrooms,” he says. “I’m looking for the right trees, but more than that, I’m watching the sun to see where it hits the hills.”

The sunlight filters through the poplar leaves, landing in dapples over his body, and in the confusing mosaic of light and shadow it’s hard to see exactly where Ken’s brown T-shirt ends and the trees begin as he dashes between them in pursuit of the spring forest’s best fruit.

Suddenly he’s down on his knee, and the jackknife is a quick gleam in his hand. With one sharply angled motion of his thumb, the morel is in his hand. “Look at that,” he says, holding the mushroom up between his eyes. “That’s grade A top-notch right there.” Amid the jewel greens of the vernal forest, where fresh leaves have exploded everywhere out of their winter slumber, the real gem is a small brown mushroom with a deeply pitted cap. 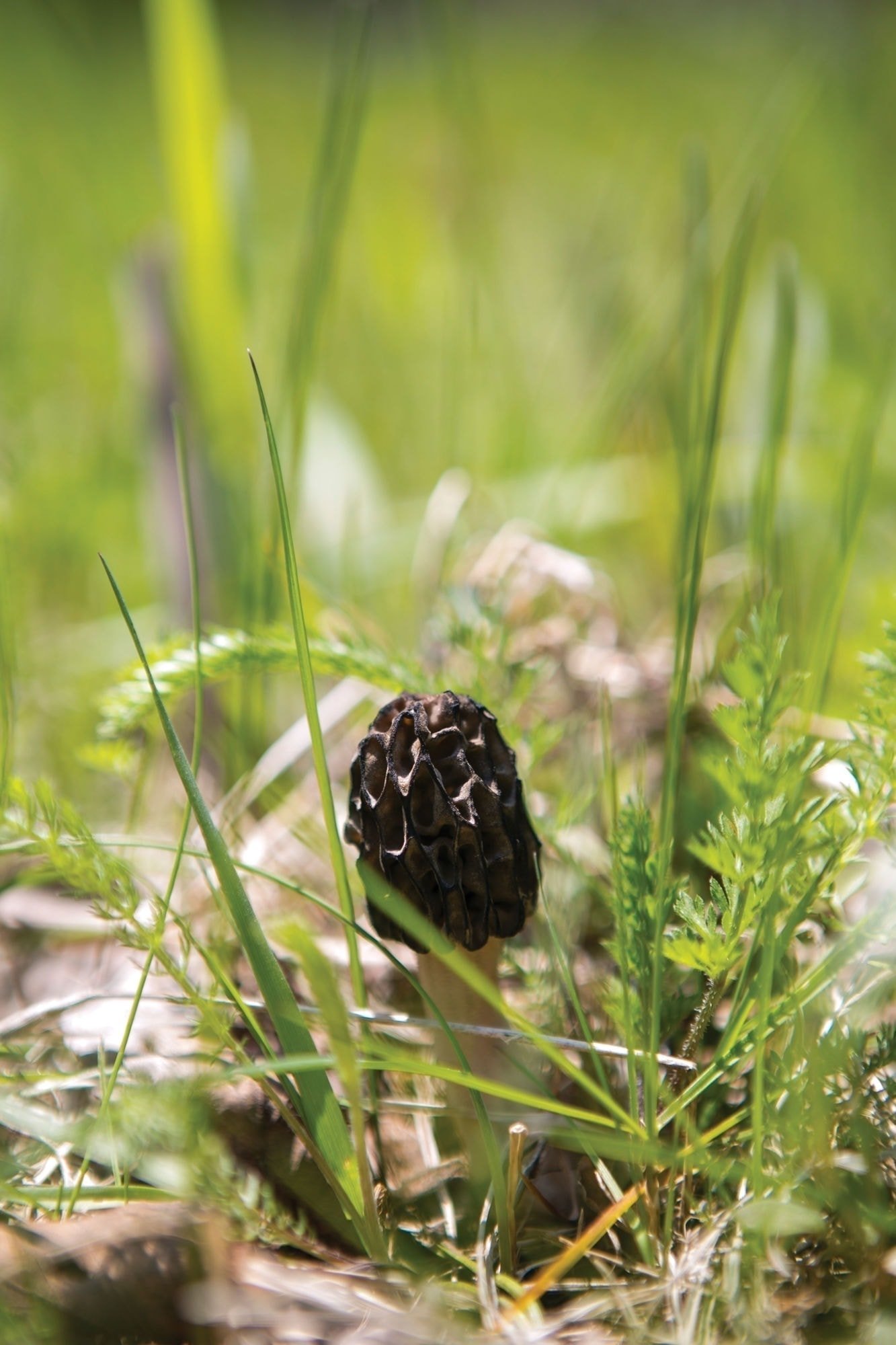 A good morel is young, but not too young. Its ridges should just be opening up, so the mushroom is still firm, but not so firm that it hasn’t had a chance to release its spores. The balance is precise, and Ken cares a great deal about precision. Though he speaks with the casual ease you’d expect from a man of the woods, he would never call a mushroom by its common name. His encyclopedic knowledge of fungal species comes from a dedicated self-study of biology and mycology, and he expects any mushroom hunter to know the essential Latin terms. “It has one real name,” he explains. “If one guy calls it this, and another one calls it something else, how do you know you’re talking about the same thing? That’s how mistakes get made.” Morchella elata, Morchella esculenta, Morchella vulgaris—this is the true language for describing the elaborately ridged morel. As Ken sees it, if you are going to intervene in the symbiotic rhythms of the forest and hunt the mushrooms, you must know something about how and why they grow.

Often Ken will sprint up a hillside with a sudden burst of speed until the momentum propels him up onto the highest point of a fallen tree trunk, where he balances on one carefully planted foot, the other tense and poised for motion behind him. He’ll pause and swivel his head, taking in the planes of the landscape. For a moment he is as stoic as an owl, heeding the forest and all its hiding places. Just as suddenly he’ll leap from his perch in the direction of a shallow gully underlying a poplar, where snowmelt and rainwater are likely to collect. Low spots are moist, and fungus needs moisture.

The forest is a collection of echoes—green leaves in the trees, wide trillium leaves on the ground. The ridges in the ash trees appear again in the caps of the morels ringing the forest floor beneath them. Out here, in the ramp-spiced spring air, everything is part of a balance, and Ken Harris is seeking that liminal space every single day of the week. He says, “out here, I’m thinking about slope and stream and catch, where moisture collects. I’m not thinking about Facebook. I’m thinking about the woods, and I’m watching the whole time.” He becomes a part of the forest, an echo of the reasons things grow in certain spots, the way careful study will lead you to a morel every single time. You will always find him in certain spots in the woods, jackknife in hand, boots shuffling aside leaves, eyes taking note of mycelium webbing the ground, of all the clues that act like signposts announcing exactly where you’ll find the deep brown arc of a perfectly tender elata.

Morel Recipes and Key Facts from “The Art of Cooking Morels”

Morels: Why You May Never Be A Certified Wild Mushroom ID’er

Morel Mushrooms: How to Find, Store and Cook with These Tasty Forest Finds