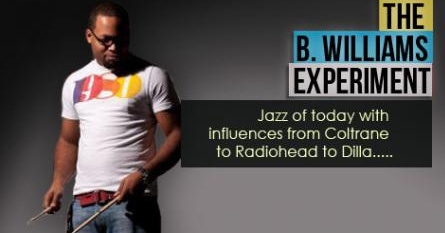 LELAND and TRAVERSE CITY: The Leelanau Community Cultural Center and Traverse City’s Little Bohemia are proud to cosponsor an evening of jazz featuring Detroit native Brandon Williams from the renowned Baker’s Keyboard Lounge in Detroit. On Saturday, April 18th at 7 pm, the Old Art Building in Leland will transform into a nightclub, featuring The B Williams Experiment, with Brandon Williams on the drums, Anthony Gordon on the keyboards, De’Sean Jones on the saxophone and Damon Warmack on the bass. The group will  appear on Sunday the 19th at Little Bohemia in Traverse City from 2-4 pm. Tickets ($25 each) for both shows are available at MyNorthTickets.com or by calling 231-256-2131. (cash bar)

Detroit bred Brandon Williams’ life has always included music in some capacity, first as a listener, then as a musician, and ultimately as a producer. He is a musical architect who is quickly making his name and stake as a front-runner in the music industry.

On the music scene since he was 12, Brandon William’s career is astonishing. A direct protégé of Grammy and Billboard super-producer Michael J. Powell, he is a powerhouse of musical knowledge and ability, receiving requests to perform, engineer, MD, arrange and produce around the clock. Known as one of the premiere drummers on Detroit’s live music scene, he is also known for being one of the “go-to music guys” because of his ability to play numerous instruments and his versatile repertoire. In 2009, he collaborated with Vickie Winans on “How I Got Over.” The album was nominated for 9 Stellar Awards (winning one) and a Grammy Award. In 2010 “How I Got Over” was nominated for a NAACP Image Award.

As a producer, he has lent his hand to such artists as; Janet Jackson, Pharoahe Monch, Bobby Creekwater, Vickie Winans, Jadakiss, Lin Rountree, Anita Baker, Jay Electronica, Jeymes Samuel, Ryan Leslie, and has also recorded with Stevie Wonder. His music has also been featured in numerous commercials for AT&T and Honda.

In his own words- “I want people to know I’m a ‘real’ producer… not just a beatmaker. I’m striving to be among those people who bring good music to the forefront. Real good, feel good, life-altering, soul-healing music is what I’m about.”

This concert is sponsored in part by Leelanau Community Cultural Center and the Edmund F & Virginia B Ball Foundation.

For more information contact the office at 231-256-2131 or go to oldartbuilding.com.