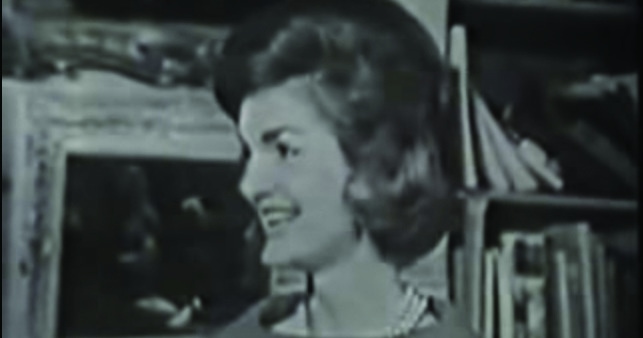 Anne-Marie Oomen reflects on her younger self watching Jackie O on the television with her mom in her Northern Michigan farmhouse in February, 1962. Find the essay in the April 2015 issue of Traverse, Northern Michigan’s Magazine.

We don’t like the president of the United States, but we like his wife. She likes antiques and old things. My mother gives over her political grudges to take notes on old dishware and lamps. She gathers magazines and newspaper articles about historical furniture. And tonight is special: the first lady will be on TV.

My mother and I sit side by side at the dining room table. She is cutting out a pattern for my sister Marijo, laying it out like a map of the world. I am cutting valentines, but only when she’s pinning the pattern because we have only one pair of scissors. We trade off using the scissors. I cut out the cheap valentines—why couldn’t she get the shiny, pre-cut ones?—and worry about Valentine’s Day. She cuts the pattern for Marijo’s new spring dress for church. While she pins the next piece, I cut and write notes on the valentines. We trade. Outside, winter light fades over the barns. My dad has taken my siblings sledding so she can make this dress.

Be my valentine. Your friend, Anne

I add notes to these disappointing valentines so that my favorite friends will know I really like them, and the kids I don’t like will still have a valentine even though I am not sure I want them to talk to me. Then there is the other worry: what if there are none in the envelope with my name on it that hangs on the bulletin board at school? Valentines are a terrible worry: who to give to and who not to give to? Who cares for me and who doesn’t? It is a battle of who and who not to love, who to be loved by. It’s not really love, even I know that, but it feels as important as love. It gets all screechy inside of me, and I hate it, and then on top of that, I feel guilty for not loving everyone, even some of the girls in the 4-H club.

I would like to talk about the valentines, but my mother is busy with the pattern. I can see that this will take her attention, and she will be impatient if I ask now. I wait for the scissors and for the special TV show about the White House, which has been put together by the first lady. At last, my mother glances at the clock, then turns the knob on the old Zenith. I put down the scissors, pick up the pencil. She returns to the table, studies the pattern, picks up the scissors. The screen clears. From the TV, a black-and-white picture appears showing the White House when it was first built. We look up, look down, waiting for the beginning. I think this will be boring.

Even my conservative mother, who believes in never wearing anything too showy, likes that Jackie dresses beautifully4  and walks gracefully. We like to see her slim frame in pictures, so unlike our stocky bodies, and we always notice her “wardrobe,” a new word for me. We study her beauty, not quite sure what to do with it because there is so much of it. But now her voice. Jackie has a voice like … it takes me a while to decide … like dark chiffon. She speaks carefully; words become flowers, delicate and slow to bloom. This is how the first lady becomes Jackie, a whole friendlier thing, but at the same time, her voice adds mystery to that friendliness. It fills the dining room, soft and glowing.

The next thing I notice: my mother stands still, listening. As much as I want to listen to Jackie, I want to watch my mother, scissors poised in her hand. This voice has stilled my mother, stopped her ever-swift movement toward the next pot of soup, the next broken bone, broken machine, broken heart. Something has quieted her nerves, something from the TV, from the outside world.

I stack my paper hearts, listen to the voice, and watch my mother listen to Jackie talk about American antiques and collectibles, how she will gather them for the White House, how she thinks the White House should have the best things.

Then she appears on the screen. I try to do two things at once: watch my mother study the face, the dark hair, the heavy brows, her classic dress—lean lines on her slim body—and at the same time watch the screen. Here is something I have never seen before. She is beautiful but she isn’t quite certain. She, the first lady, is nervous and a little scared.

In that crowded dining room, my mother and I stop trading scissors. We do nothing for the rest of the hour. We learn all about the White House. What I finally decide is that the voice is really smart, and I like that, and I think my mother likes that, too. At the same time, her voice makes her seem like she could be hurt. She seems like someone who is … I search for the word … shy but doing something brave. Oh. Is that what my mother hears, shyness in this bold thing that Jackie is doing? I want to have what she has, the way of making people—no, of making my mother—listen, even though she is not strong.

Is this how valentines are sent to an entire country?

Has she sent us a valentine? Be mine?

And we will. When the show is over, I stare at my valentines in their cockeyed stack. I wish I could make one for her. I wish I could send one to her. The first lady has shown me my mother listening. Because she is graceful and brave in a quiet way. Because she cares about how she looks and about her house, the White House, the house of the country. She wants it to be the best so she is doing things to make it the best. She is showing the country, even my mother and me, how she will do that. I think about this. She is showing my mother how it is to be done, and my mother wants … not the White House but something like it, here in our dirty, dust-driven farm.

It’s about how to be. And this is what my mother wants me to be.

I am not any of those things.

But I vow to try to be quieter, be better.

Mom hands me the scissors. I am to take them and be quick and sure and give her back the scissors when I’m done.