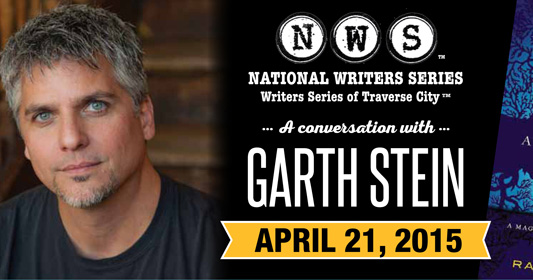 Bestselling Author Garth Stein will be in downtown Traverse City for a National Writers Series appearance on Tuesday, April 21 at 7 pm.  Stein’s The Art of Racing in the Rain has sold more than 4 million copies and spent more than three years on the New York Times bestseller list.
For more information or to purchase tickets to the April 21 event click here.
Stein’s A Sudden Light is the first book featured in the National Writers Series presents: “Find Your Park”…in a great book. The National Park Service (NPS) is celebrating their 100th anniversary. The National Writers Series (NWS) is joining in the celebration by suggesting books and providing discussion guides that encourage book groups to read stories that are connected to the NPS.
Sarah Bearup-Neal will serve as the guest host for the evening in conversation with Garth Stein. Bearup-Neal is the host of “Talk About Art,” an artist interview series at the Glen Arbor Art Association.
Bearup-Neal caught up with Stein earlier this week for a pre-event chat.

A little context is necessary here. I believe someone asked me, after looking at my schedule, when I had time to write. I replied:  “I’m taking the summer off to write. Which I find funny, because I’m a writer, not a promoter, so shouldn’t it be the other way around?” However it happened, the point of my comment was that my job isn’t just to write books, it’s to get people to read my books, so that demands a certain amount of self-promotion. I’m happy to do it, and I enjoy it. But first and foremost, I am a writer, and a writer needs to write. So I write on the road–in hotel rooms, on airplanes–and in my studio when I’m home. It’s important that we don’t have rituals about where and when we can write; a ritual about our writing is just an easy excuse for us to not write.  And there’s nothing in the world easier to do than not write…  I’m not writing right now!

A Sudden Light is set in the Pacific Northwest. At the base of this multigenerational story is struggle between a lumber baron father and his conservation-minded son, who, among other things, is a climber of tall trees. What did you know of the activity (tree climbing) before you wrote the book?

First, there’s a significant difference between “timber” baron and “lumber” baron. My novel is about Elijah Riddell, a notorious timber baron. Secondly, I knew nothing about the climbing of trees before I began research for this project.  In my reading about the timber industry, I came across a book by Richard Preston called The Wild Trees. It’s about the first researchers who climbed into the canopies of redwood trees to explore the ecology of the trees hundreds of feet up. I was really entranced by the book and decided I needed to see it for myself, so I contacted Tim Kovar of Tree Climbing Planet and asked him to teach me how to get up into the tallest of trees. It’s really quite an incredible experience.

How did you learn to write fiction?

I don’t have an MFA in writing, if that’s what you mean. I’ve done a lot of theater and I made documentary films for a long time (I do have an MFA in film). I wrote a lot when I was young and it was natural to get back to it when I wrote my first book back in 1998.  But I have no formal training. So I suppose I learned to write fiction by reading fiction.

You’ve also written plays, including Brother Jones, which had a short Los Angeles stage run in 2005, and then was later resurrected as A Sudden Light. Fiction and playwriting are different forms. What writing skills crossover from one form to another?

I think theater has taught me a lot about dialogue and pacing, about intention and motivation. and about dramatic structure. Plus, when people ask me to list my favorite writers, playwrights such as Tennessee Williams, Eugene O’Neill, and Bertolt Brecht always make the list, so theater has definitely informed my writing style.

Enzo-the-dog is the narrator/philosopher of your third book, The Art of Racing In the Rain. Looking back on his life with his humans, Enzo tries to make sense of the challenging events that befall his family, and he does so with a fair amount of humor, wit, some poetry and canine practicality. Could you tell us a little more about how Enzo has also inspired a young adult version of the book, as well as a song video?

Enzo is a special character, and I feel very fortunate that he chose me to tell his story to the world. The continuing life of Enzo is a testament to his honest, true, and passionate personality. I think the messages Enzo communicates to us in The Art of Racing in the Rain are relevant to all, so it’s fun to have the young reader edition, and now, the first of four children’s picture books, Enzo Races in the Rain! so his messages will find a larger audience.

You’re a founding member of the Seattle7Writers, a wonderful project that promotes reading, literacy, libraries and making books available to all. Could you talk about the group’s motto “Read local?”

We’re an all-volunteer organization comprised of 68 NW authors dedicated to doing good deeds for the reading and writing communities in our area. In addition to working with local bookstores, libraries, and literacy groups, we also hope to promote the wonderful literature of our members, thus the “Read Local” motto. But really, in the end, we’re about “Read.” Because you can take away someone’s house. You can take away his car and his job. But you can’t take away his imagination. We believe that everyone with an imagination should have access to books, and all of our programs are geared toward putting books into the hands of readers who are excited to read.

What tool is a favorite and seems intrinsic to your writing process?

A hammer. Usually wielded by my wife when she’s editing my work. Because most bad writing is bad because the writer’s ego gets in the way. We must take a hammer to our ego if we want to write good books. A book is not about the writer; it’s about the characters and the story. And until the writer of a work understands that, the work will always feel contrived.  So my favorite tool is definitely a hammer.

(I mean, in reality, my favorite tool is a chainsaw, because chainsaws are angry and snarling and powerful and no-nonsense. But if I said “chainsaw” in answer to your question, your readers would think I’m a little bit crazy. And I probably am a little bit crazy, but aren’t we all? And anyway, I don’t want people thinking of me holding a snarling chainsaw. I think people would rather like to imagine a writer holding a little ball-peen hammer, carefully hammering away at a metal sculpture. But in reality, writers use chainsaws. And not electric ones, either. Oil-in-the-gas-jug, two-stroke, grip-it-and-rip it chainsaws. Oooh. Just thinking of the sound and smell of a chainsaw wants me to get back to work on my new novel!)

2015 Season of the National Writers Series