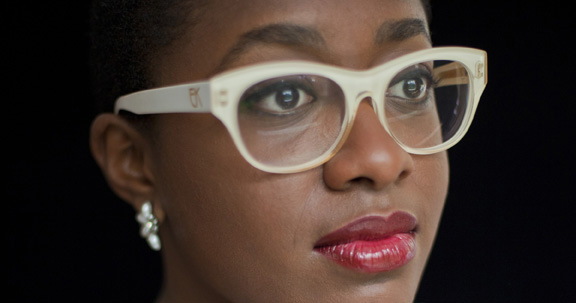 Singer Cecile McLorin Salvant is performing in downtown Traverse City at the City Opera House on Tuesday, April 28 at 7:30 pm. Read on for a complete description about her background, influences and more. To purchase tickets to the show click here.

Born and raised in Miami to a French mother and a Haitian father, Salvant started classical piano studies at age 5, and began singing in the Miami Choral Society at 8. She moved to Aix-en-Provence, France, in 2007 to study law as well as classical and baroque voice at the Darius Milhaud Conservatory. She sings in her native French and Spanish as well as English, and is the voice of Chanel’s “Chance” ad campaign. She won the 2010 Thelonious Monk International Vocals Competition. Her American debut album, WomanChild, on the Detroit-based Mack Avenue label, was nominated for a Grammy award.

Salvant topped four categories in the 62nd Annual DownBeat International Critics Poll, including Jazz Album of the Year. Besides honoring WomanChild as the year’s best jazz album, critics named her the top Female Vocalist, as well winning the Rising Star category. She was honored with the cover of the respected jazz journal.

“I try to stay away from too much advice. I have to keep my head on straight and continue with what I want to do.” —Cecile McLorin Salvant

“She sings clearly, with her full pitch range, from a pronounced low end to full and distinct high notes, used sparingly. She also presents a lot of jazz history.” —New York Times

Tickets start at $30. Go to CityOperaHouse.org