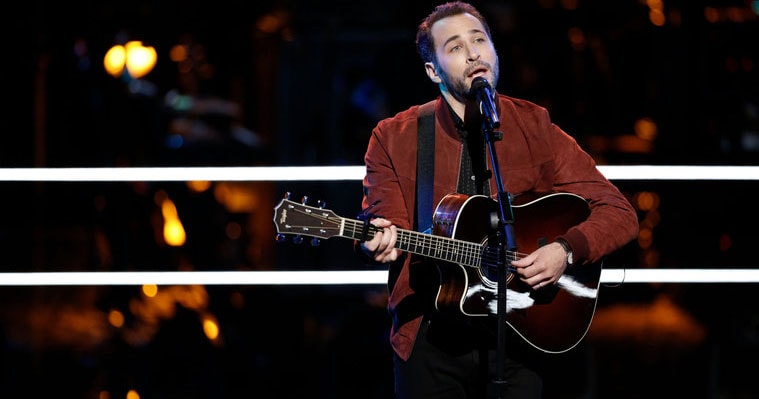 After three rounds on NBC’s The Voice, Traverse City musician Joshua Davis has advanced to the “Live Playoffs.” Joshua began his journey when he wowed judges in the Blind Auditions in February (turning two chairs!) and after that he advanced to the “Battle Rounds,” where he lost his battle against Brian Johnson, but was stolen by Adam Levine.

Before the Knockout rounds Joshua worked with Adam and musician Nate Ruess, the lead singer of the band Fun, and they gave him advice on how to bring his best performance to the stage.

For his Knockout performance, Joshua performed “Arms of a Woman” by Amos Lee which he said he was dedicating to his wife. He was up against Lexi Davila, who the judges acknowledged had issues with nerves in the past. She sang “Anything Could Happen” by Ellie Goulding.

At the end of both of their performances each coach shared their comments with both contestants.

“Joshua, I really wanted to spoon with you after that performance and I’ll take whatever side you’re comfortable with,” Blake Shelton joked with his former team member. He went on to give him notes on the performance.

“I knew you were great but that is easily the best I’ve heard you and it just looked like a guy who’s ready to go to the end of this thing. I would probably go with Joshua,” Blake said.

Christina Aguilera said that this Knockout performance “shocked” her the most and said that, “Joshua pulls on your heartstrings.”

Pharrell said he felt like Joshua had a “masterful performance.”

When it came down to Coach Adam Levine, he acknowledged that the biggest challenge anyone was going to face in the Knockout rounds was going to be Joshua.

After a moment of suspense, Adam chose Joshua to advance to the Live Playoffs and remain on his team. Christina stole Lexi shortly after Joshua left the stage.

“It was a really tense moment but it feels good,” Joshua said afterward. “Adam speaks my language, we are just getting to know each other but for him to have the faith in me to keep this going into the Live Playoffs is really, really exciting.”

The Voice is on NBC on Mondays & Tuesdays, 8/7 central. The show is now in its fourth stage of competition, the Live Playoffs, where viewers can vote for their favorite performances. Tune in and vote for Joshua!