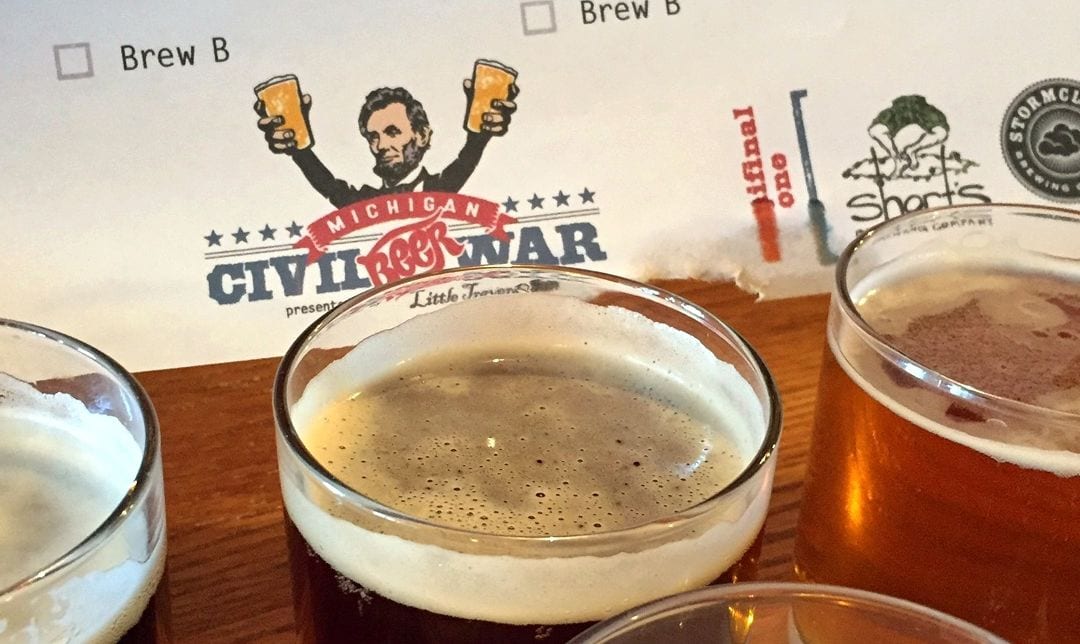 FRANKFORT: The war of the North versus the South is over, with history repeating itself. The Michigan Civil Beer War has ended with Stormcloud Brewing Company, a northern newcomer from Frankfort near Traverse City, claiming first place in the inaugural competition.

Presented by Little Traverse Inn, a gastropub and Bed & Breakfast in Leelanau County, the Michigan Civil Beer War featured four northern Michigan breweries and four southern Michigan breweries in head-to-head, taste test duels. The friendly competition took place at Little Traverse Inn near Maple City beginning December 4-7, 2014 and continuing select weekends with the final battle taking place March 19-22, 2015.
Each brewery was challenged to bring their best beer from four distinct styles of beer. Judging was open to the public with participants sampling up to eight beers – four from “Brewery A” and four from “Brewery B.” Each blind taste test concluded with the voter choosing a favorite beer from each style and selecting Brewery A or B on their beer ballot.
According to Brian Confer, Head Brewer and Co-Owner of Stormcloud Brewing Company, the blind taste test was unique for a beer competition. “Little Traverse Inn changed the nature of the competition by making the voting ballot a blind ballot. Participants didn’t know which brewery they were voting for,” says Confer. “Not being able to simply vote for their favorite brewery forced them to really taste the beer, evaluate it and pick a favorite.”
Graeme Leask, owner of Little Traverse Inn, is very happy with voter participation in the first-time competition. “More than 1,300 beer ballots were cast during the competition. And many participants made a point of tasting and voting in every round,” says Leask. “The local response was very positive. Even the non-traditional beer drinkers found themselves getting involved.”
Confer attended every taste test in the competition and witnessed a neck-and-neck contest each time. “The fact that each battle was so incredibly close is a testament to how good Michigan beers are,” says Confer. “I heard from several people who discovered new favorites and who left with a feeling of pride in how good beer drinkers have it here in Michigan.”
Leask agrees. “There were plenty of new beers ‘found’ by our guests during the competition. Two of the most talked about beers were from Stormcloud: Gerald’s Talking Dog, a Cherry Rye Dubbel, and 7 Spot Amber Ale. Both were new to me and our guests.”
Stormcloud’s flagship Rainmaker Ale, awarded a Bronze medal at the 2014 Great American Beer Festival, was a contender in the Civil Beer War’s Pale Ale category. And Confer was eager to see how the beer would perform in this type of competition. “Rainmaker isn’t an ‘extreme’ beer, which is more typical in contests like this,” says Confer. “But I’m proud of the beer and I’m proud of the Bronze medal it received in our first GABF. And I’m quite happy that it came out on top in the Civil Beer War battles against other Michigan-made Pale Ales.”
According to Rick Schmitt, co-owner of Stormcloud Brewing Company, this year’s Civil Beer War provided great exposure for breweries in northern Michigan and beyond. “We hope voters who took part in the competition discovered the true quality, variety and ingenuity of Michigan craft beer,” says Schmitt. “We invite them to continue exploring the creativity and craftsmanship of Stormcloud and our neighboring breweries in the Traverse City area.”
Leask is already looking ahead to the 2016 Civil Beer War and hopes to include more northern and southern Michigan breweries in the competition. As a follow-up to this year’s Civil Beer War, Little Traverse Inn will also host two beer dinners during the month of April with both finalists. The dinners will pair five beers from each brewery with special menu items. The beer dinners take place April 11 with Brewery Terra Firma and April 25 with Stormcloud Brewing Company.
Participating Breweries in the 2015 Michigan Civil Beer War
Southern Michigan:
Arcadia Brewing Company, Battle Creek
Dark Horse Brewing Co., Marshall
Founders Brewing Co., Grand Rapids
New Holland Brewing, Holland
Northern Michigan:
Brewery Terra Firma, Traverse City
Right Brain Brewery, Traverse City
Short’s Brewing Company, Bellaire
Stormcloud Brewing Company, Frankfort
Stormcloud Brewing Company opened in June 2013 just two blocks from Lake Michigan in the lakeside town of Frankfort, Michigan. A small brewery specializing in Belgian-style brewing, Stormcloud offers 16 taps in addition to a full menu of flatbread pizzas, small plate appetizers, soups/salads, charcuterie plates, and specialty popcorn.
###
Contact:
Rick Schmitt, Co-Owner
rick@stormcloudbrewing.com
231-352-0118
Keirsun Scott
231-352-0118
Stormcloud Brewing Company
Belgian Inspired, Michigan Made
stormcloudbrewing.com