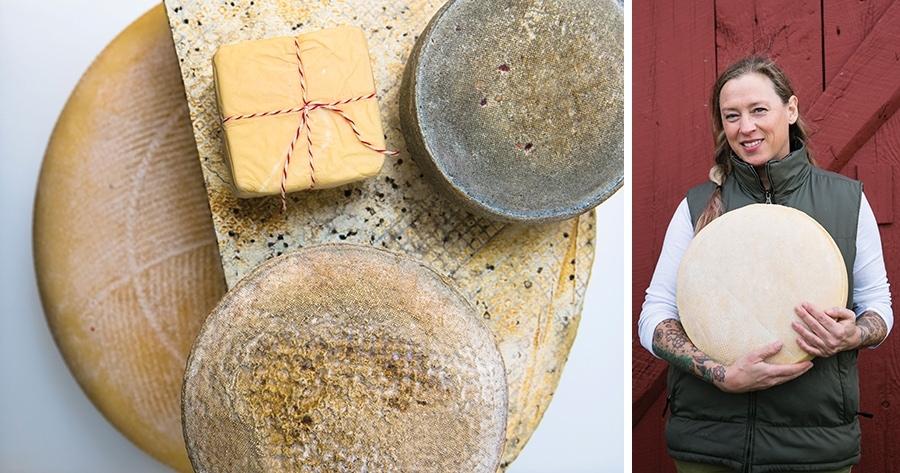 Sue Kurta’s farm could easily serve as inspiration for a Beatrix Potter illustration. Here, at this peaceful, 150-year-old homestead near Kingsley, cats romp through the green grass, and a phalanx of hens serves as a roaming entourage for Roosty, the proud rooster who rules the coop. And here is where Kurta, a self-proclaimed punk/farm girl hybrid who grew up in the Detroit suburbs, makes Boss Mouse Cheese.

Featured in the March 2015 issue of Traverse Magazine. Get your copy. 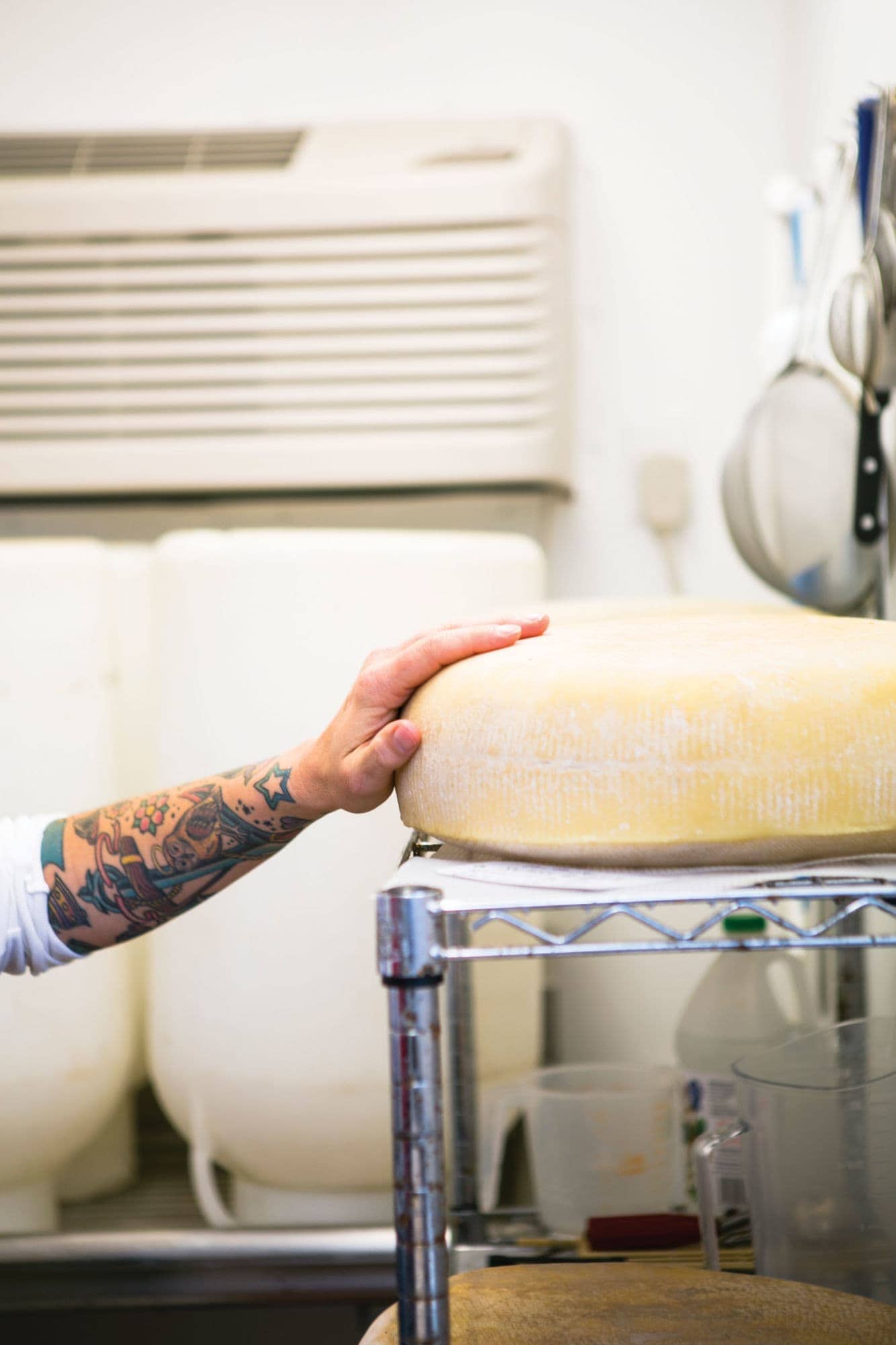 Kurta’s cheeses are a hit at the farmers markets in Traverse City and are sold at the Blue Goat, Oryana, and other gourmet and natural food stores nearby. Brewery Vivant in Grand Rapids lists Boss Mouse cheese on its menu, and The Produce Station in Ann Arbor sells her smoked butter. Just in the past year, increased sales have allowed Kurta to quit her job as a secretary at an insurance company and make cheese full time. And she’s even hired a couple of part-time employees to help.

And at the moment, she’s also doing her own part to keep up with demand. She unloads 12-gallon cans of Moomers milk—pasteurized but not homogenized—and moves them around with an electric ceiling winch her father, Mike Kurta, designed for her.

In a white and stainless steel kitchen, deploying the alchemy of enzymes, select microbes and heat, she turns the milk into the curds for cheddar, Swiss and montasio cheeses, or Brie if the spirit moves her. Montasio is a mild Italian cheese she uses as the base for most of her flavored cheeses, including herbs de Provence, black pepper or Sriracha Jack.

Kurta keeps the curds separate with a large, wire whisk. Later, she dumps the curds into a wheel-shaped mold and lets some barbell weights squeeze out the whey and form it overnight. Then, it’s into the walk-in cave to age and develop a naturally waxy rind. (She does sell curds, by the way, and they’re often the first things to go at the farmers markets.)

Kurta enjoys sampling the cheese with a glass of white wine with a visitor while the latest curds begin to squeeze into a wheel of cheddar. There’s the savory herbed montasios and the creamy Brie and a tangy Swiss and a discussion of how some people like eating the rind or how there’s no fancy word for “cheese maker.” But cheese maker is what she’s aspired to, and the title suits her to a T.

Kurta believes the spirit and flavor of the idyllic setting near Kingsley comes through in the wheels of cheese aging in the cool room kept at the right humidity with two cigar humidors.

It’s the French concept of terroir, meaning that the land, the entire atmosphere around the farm—even the conversation she may share with whoever visits while she crafts the cheese—is present in the final product. 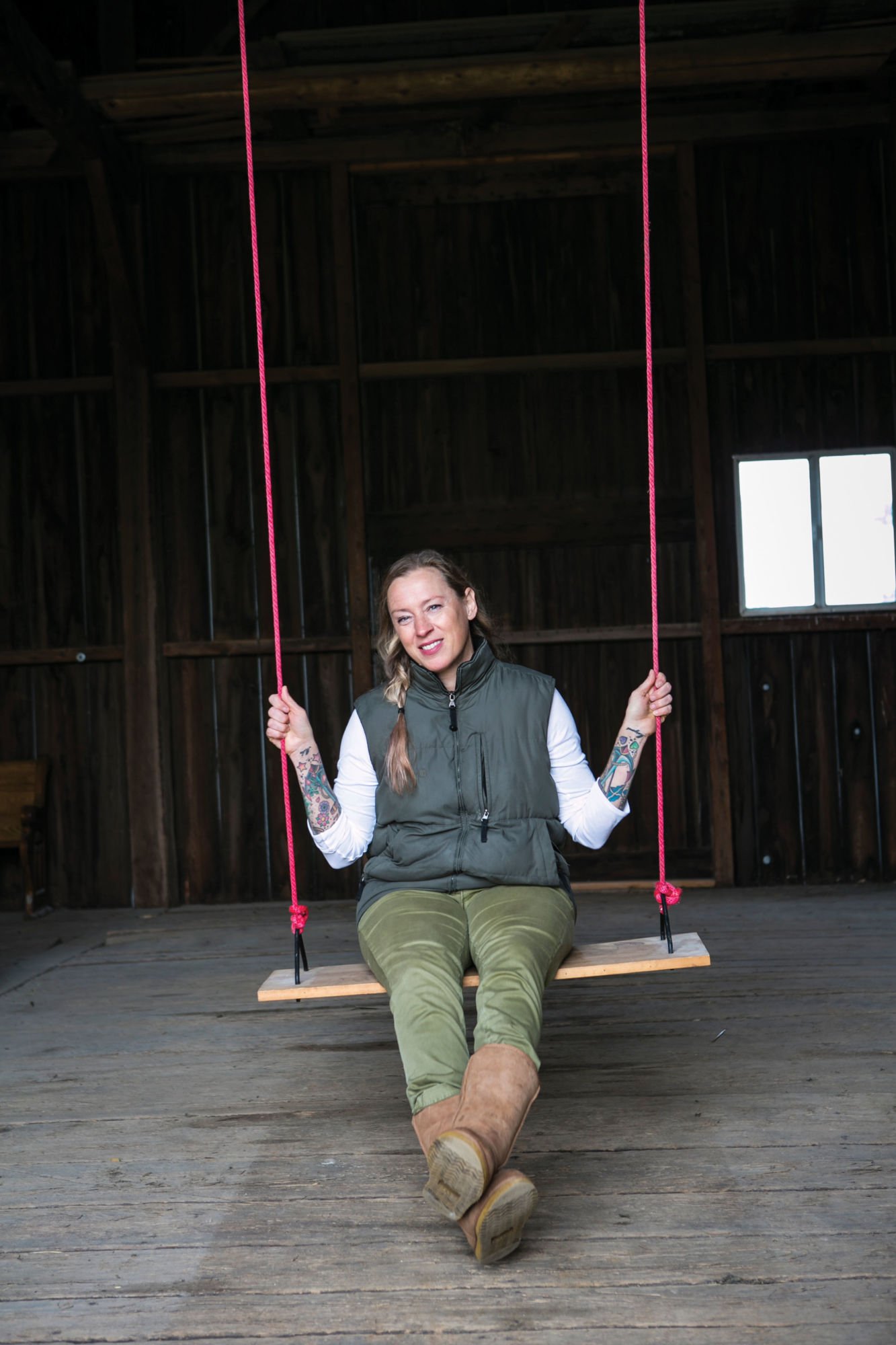 And there’s plenty of character here. The sleeves of tattoos on each of Kurta’s sturdy arms display upbeat things: cruise ships, pineapples, the outline of Michigan, a marshmallow bunny. “I’m basically a happy person,” she says. And to her, cheese is the ultimate feel-good product.

Even the logo and name of her company make people smile.

She based her corporate identity on a photo of a 3-year-old girl taken in 1920. It’s her Aunt Julia, now deceased, wearing a large bow in her hair that looks like mouse ears. Kurta added the Boss part because she liked how it seemingly contradicts the Mouse part. She resisted suggestions from friends and relatives to name it something local like Kingsley Cheese Co., or something pastoral like “Rolling Acres,” and went with something more, well, more Sue Kurta.

The name and logo have been an asset in attracting attention and setting a light mood about her cheese. “You just can’t say the name without smiling,” she says. 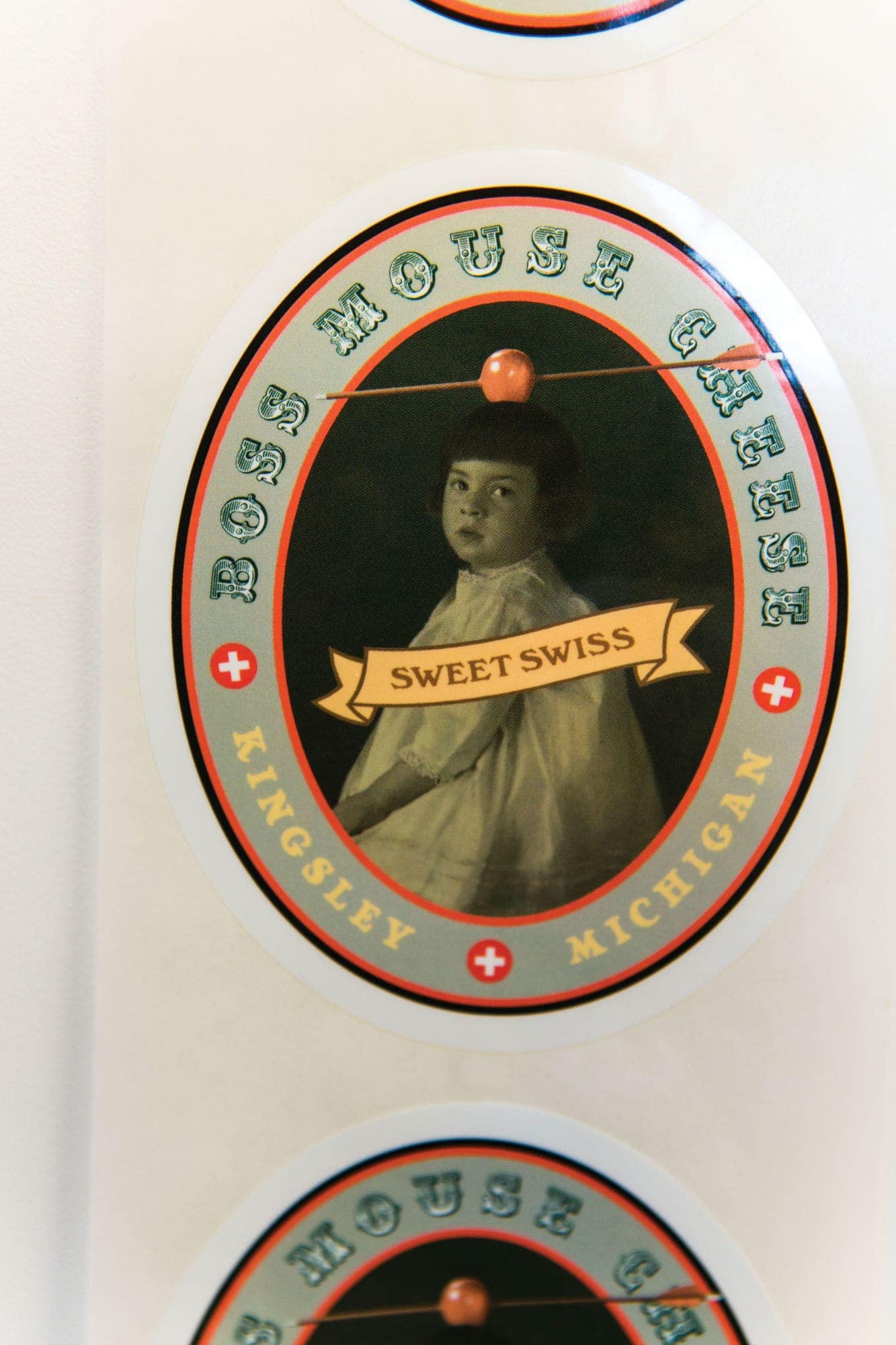 Kurta had a career early on as a secretary to music industry executives and, later, Manhattan’s Wall Street bankers. She made good money and then worked her way to this. Of the New York existence, she says, “It’s a fascinating world and I’m glad I did it, but I found that it’s not me.”

What was more “her” were the cooking classes she took, including one that taught how to make small batches of cheese in her kitchen. She caught the bug, took a sabbatical from Wall Street in 2008 to do a three-month apprenticeship on a small cheese farm in Maine. That was still years from her big move, but cheese making had found its way into her blood. Eventually, she moved to Traverse City and worked at an insurance company while getting the cheese business to curdle.

Today is a Friday, and for Kurta, that means the afternoon in the cheese room is jam-packed with activity. She’s prepping for Traverse City’s Sara Hardy Downtown Farmers Market on Saturday morning while also starting a new wheel of Swiss.

Kurta moves around the small, bright cheese kitchen while jazz from WNMC plays softly in the background. A sign urges to “Keep Calm and Eat Cheese,” and a plastic Swiss cheese wedge says, “Cut the Cheese.” Playful, yes, but Kurta is also full-on serious about her mission, checking thermometers and clocks constantly to determine when to take the next step. 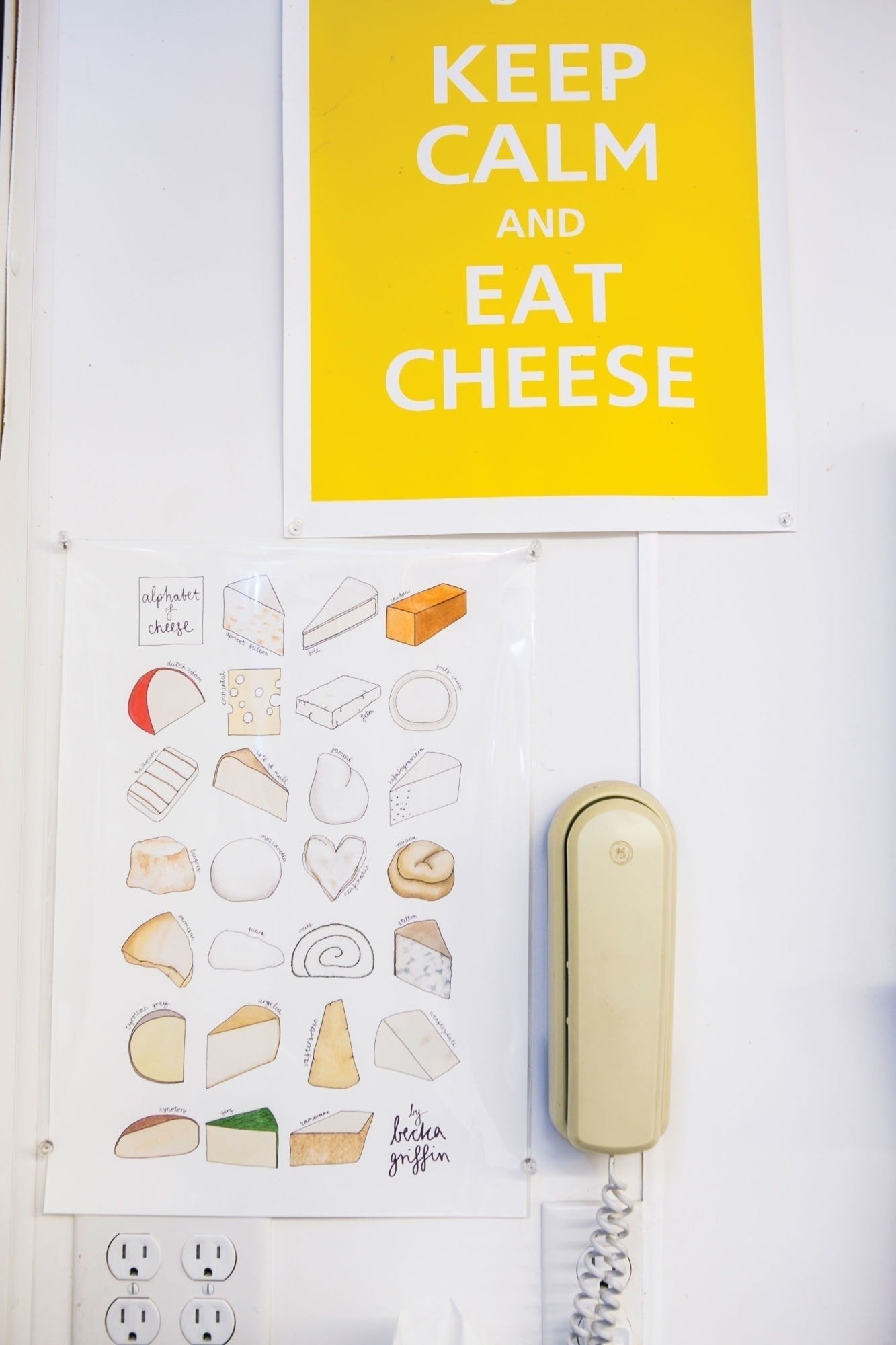 Kurta hoists the milk, pours it into the kettle and begins heating it to the prescribed temperature, then cuts open two packages of cheese cultures and pours what looks like a small amount of powdered milk into the pot.

She lets the cultures ripen the milk for a few minutes and then adds a small amount of rennet—a light brown liquid enzyme that smells a bit like pickle juice. She uses a vegetable-based rennet, though originally rennet was taken from the digestive systems of cows or goats. In fact, the first cheese is believed to have been discovered as curdled milk in a dead animal’s stomach, as the rennet solidifies the milk as part of the digestive process.

Kurta monitors the mixture as the temperature rises to 120 degrees. “Temperature is really vitally important in cheese making,” she says. As the bacteria and enzymes do their thing, the action quiets. Kurta catches up on other things, answers phone calls for more smoked butter, and checks the stock she has on hand. 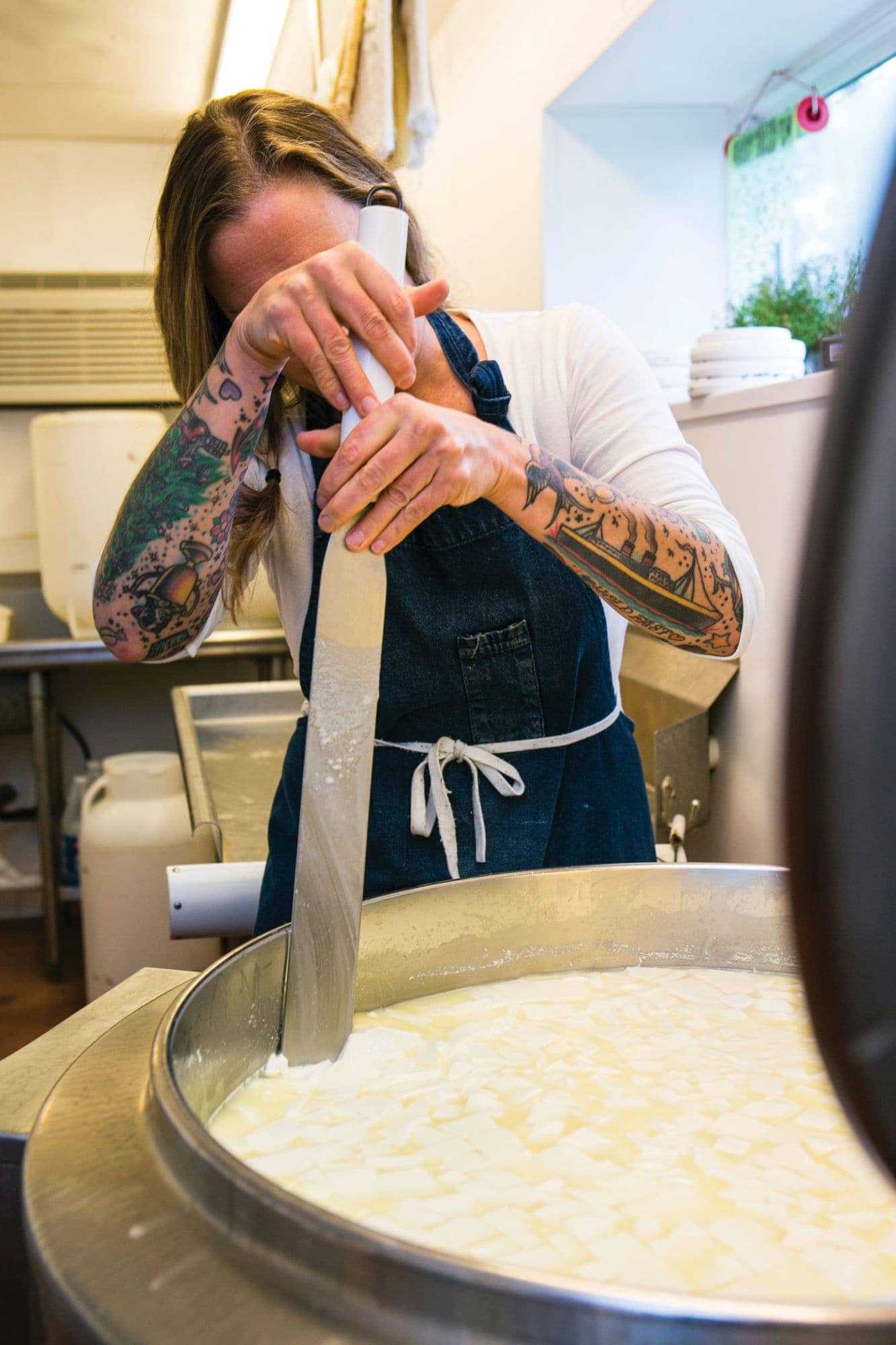 She also enlists the help of her mother, Margaret, in breaking up curds made the day before, and in seasoning and packaging them. They’ll be using their newly printed labels with the words “Cheese Kurtas” below the ever-present Aunt Julia, this time dressed as Little Miss Muffet.

Among the stainless steel in the immaculate “cheese room” is a vacuum sealer and a grocer’s scale that can be set to per-pound pricing. Her father is using the scale to weigh packaged and labeled wedges. He writes the price with the kind of marker that surgeons use to draw on skin because it’s biologically safe and the ink won’t run on the package.

The cheese is ready for the next step in about an hour, give or take. She uses the clock to help her keep an eye on the morphing milk, but she doesn’t time the process to the minute, preferring to let the cheese tell her when it’s ready.

By now, there’s a nice Jell-O-like consistency and a custard color to the milk in the pot. Kurta takes a round-bladed knife—also made by her father—and glides it through the hardening curds, making sure she feels and hears the blade on the curved stainless steel walls of the kettle. The pudding-like top of the hardening milk transforms to cubes floating in whey.

She then attaches a mechanical blender—also designed by Dad and put together by a machine shop—to the top of the kettle. It keeps the curds gently moving to prevent them from becoming a solid lump.

After an hour or so, Kurta sifts off most of the whey with a pitcher before picking up the curds with a strainer and putting them in cheesecloth inside a wheel mold.

She turns it over a couple of times at regular intervals, letting the whey drain out, and she lets it sit with the weights on overnight. The wheel of Swiss will then be put into the aging cave and allowed to form a rind and age. It will spend a week in the cave, and then three weeks at room temperature and humidity. 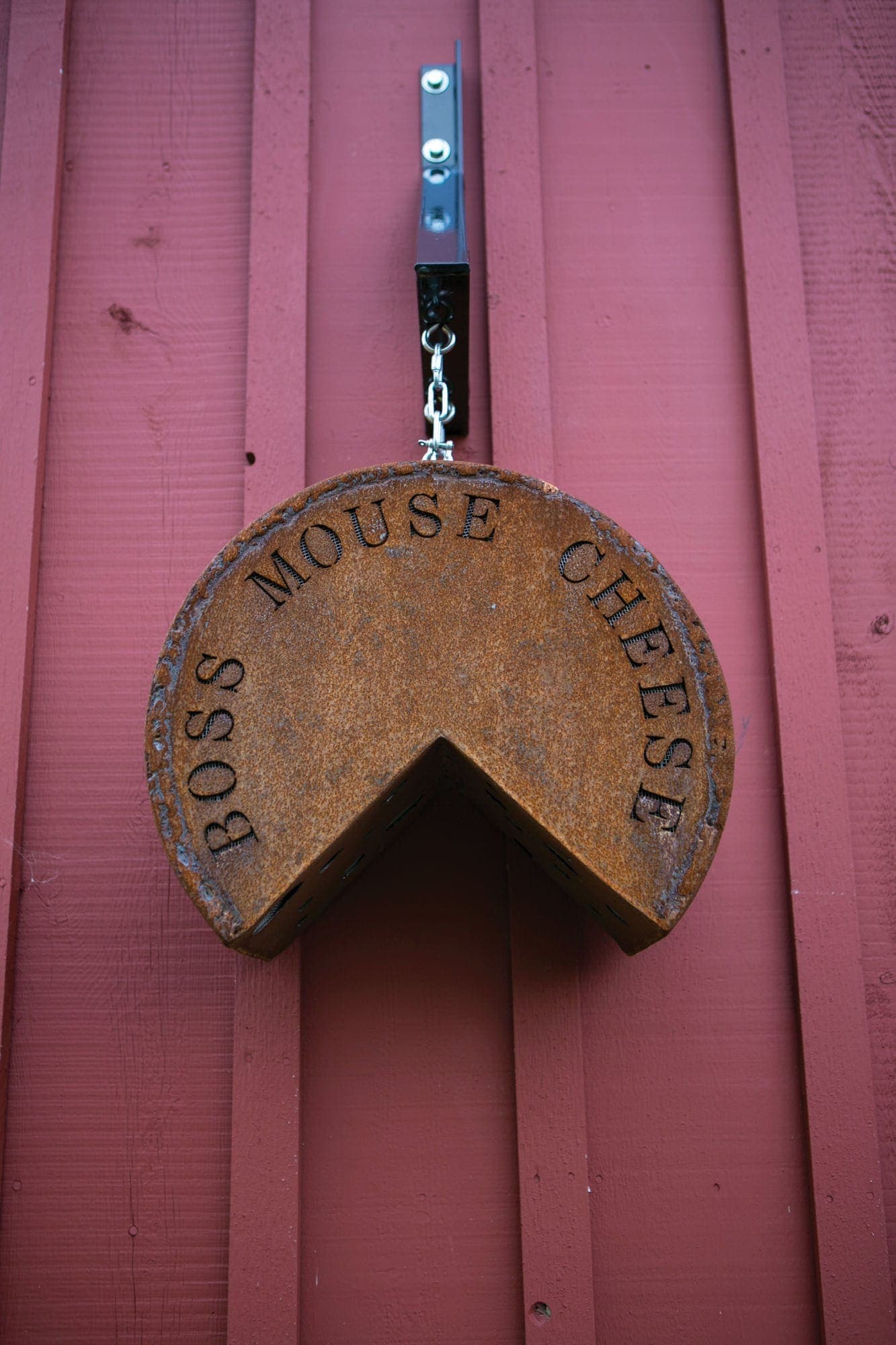 On Saturday morning, she takes several coolers of new curds, aged cheeses and smoked butter to the farm market in Traverse City. People approaching are saying things like: “We have the cheese, now let’s go get the wine;” or “This is that mouse cheese I was telling you about.”

She has to constantly refill the bowls of samples.

Kurta has increased her production and the amount she brings to the farm market. She used to run out of cheese with several good hours of shopping time left. “We figured it was opportunity lost, so we’ve picked it up and we come with a lot more product now,” she says.

The curds still sell out early, though.

And she’s developed an obvious relationship with the repeat customers and cheerily answers questions from the new ones. “It’s the happiest product in the world to work with,” Kurta says.

With her rapidly growing base of enthusiastic customers, she occasionally has to pause a moment to reflect on how big she wants her enterprise to become. That’s mostly an open question, though she wants two things to always remain. Whatever happens, she wants to be making the cheese and meeting the customers.