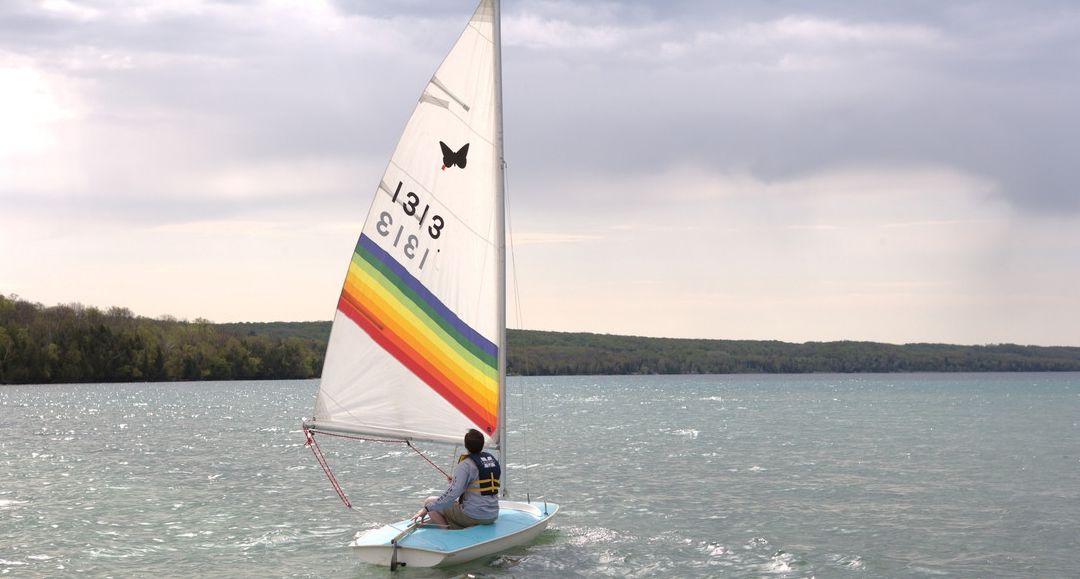 The Great Lakes Children Museum in Traverse City will open a new exhibit, “Let’s Go Sailing” on Saturday, March 21. The permanent addition will explore the fun and physics of sailing with a technically accurate and educational experience. MyNorth’s Eliza Foster chatted with Executive Director Mike Long about the new exhibit including the businesses and people that helped, the technical aspects of the exhibit, what a children’s museum does and more, see below for the entire conversation.

What is the ideal age group for kids to enjoy the museum? Are there any major differences between a museum and a children’s museum?

Great Lakes Children’s Museum is designed for ages 2 to 8 but that doesn’t mean there’s a specific age that will or won’t enjoy the museum. The more adult caregivers interact with their children (of any age), the more enjoyment and learning everyone (including the adults) will have.

Children’s museums as a genre were created by the big metropolitan museums back in the mid ’70s, ’80s when they realized their population was aging out. After some strategizing and research they found that the “don’t touch” philosophy of art and other museums didn’t resonate with young families. Their solution was to create exhibits where specifically children were encouraged to interact with exhibits in learning play. That spawned a whole series of discussions and research around learning styles, developmental stages and the power of play – all still very much the bedrock of education in children’s museums.

Can you talk about the “Let’s Go Sailing” exhibit? How long will it run?

“Let’s Go Sailing” is a permanent addition to the Great Lakes Children’s Museum.  We have about 20 such exhibits. Each is designed to allow children and their caregivers to explore the child’s world at the child’s pace, and in their own way. For Grand Traverse Bay area children, the world very much comes back to water – so nearly all of our exhibits have a connection to the water in some way.

“Let’s Go Sailing” will be the 3rd of four new exhibits introduced in the last nine months. It is taking the space of the old “Toddler Beach” – but not to worry, a dedicated space for 2 and under will be having its own re-birth (so-to-speak) as The Hatchery.

You have some pretty amazing people that assisted with this exhibit how did you make those connections?

In a simple phrase – we asked. We asked ourselves what kind of help we needed – then we wrote letters, picked up the phone and we asked for help. In this particular exhibit, we had two STELLAR partners in Alpha 3D Professionals and Quantum Sail Design.

Alpha 3D Professionals handled ALL the computer aided design work to design our “boat carts” and then printed them out (in 3 dimensions). Quantum Sail Design worked out the physics. It was a lot of very technical work which we could NOT have accomplished on our own – from the weight of the cars, to the placement of the sails, to the wind speed, to the shape of the sails and SO much more. Quantum worked through translating their experience with the physics of sailing to a kid-sized scale.

Who is your audience for this exhibit?

Our audience is anyone who wants to learn through trial and error. I expect this exhibit will rival our water station in terms of popularity over time. This exhibit represents a bit of a shift in our educational thinking. Up to now, we have concentrated on piquing curiosity and hoping folks will pursue their interests on their own. With this exhibit, and with the participation of TACS (Traverse Area Community Sailing), people who have enjoyed experiencing the fun and physics of sailing through the exhibit will be encouraged to plug into the ongoing programming at TACS.

Spring is almost here and summer is always sneaking up right behind it. What are some events, programs or exhibits that will be running for the next couple of months at the museum?

This is the 3rd of four exhibits to be installed this year.  In the next month to two months, we will be upgrading the periscope exhibit to improve its educational value, re-vamping Toddler Beach into The Hatchery, and opening a MAJOR exhibit focusing on the Great Lakes and our responsibility to be Guardians of the resource.  The exhibit is called “Guardians of the Great Lakes” and focuses on the USCG’s missions and the challenges facing the Great Lakes.

We’re also looking at launching a Youth Volunteer pilot program to see if there’s a need in the community.  The program will help children age 10 to 14 gain basic job skills through volunteering at the Children’s Museum.

In April or early May, we also plan to do an “Arts In Action” Sunday. “Arts in Action” will feature a local artist, demonstrating and explaining the intricate little known but persistently questioned aspects of their art form, followed by personal exploration under the artist’s mentoring.

We’ll have two fundraisers coming up as well. In April we have a Karaoke event on the 20th at Little Bohemia’s. Then in May we are doing a fund-raising ball.

What’s your favorite part of your job?

This is going to sound weird – but over the years I have grown to enjoy getting people to come to consensus around what’s of most benefit to kids and families, and then figuring out how to get the group to that point.

This exhibit was a GREAT learning experience for me personally as I have again experienced seeing the value each and every person can bring to a project. We had exactly the right people with the right skill sets at precisely the right moment all through this project. In some ways, that rivals the best roller coaster ride at DisneyWorld (and anyone who knows me KNOWS how much I love DisneyWorld!).

Suggested Reads for Teens from a TADL Librarian