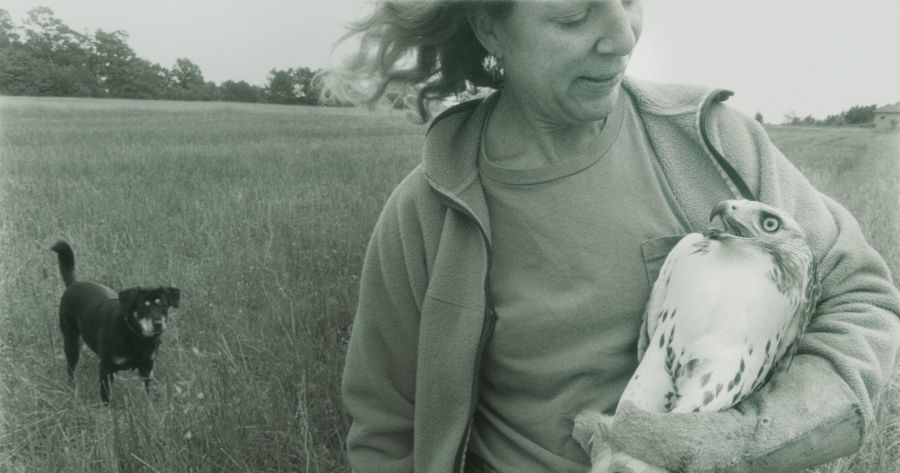 Raptor rehabilitator Rebecca Lessard, of the nonprofit Wings of Wonder, has been helping injured birds return to the air and educating the public about them since the early 90s. Rebecca has been the front person for WoW, but behind the scenes her husband, Don, was an essential collaborator in the labor-intensive work. So when Don passed away suddenly in autumn 2014, Rebecca had to re-think both if and how Wings of Wonder would move forward. When we received notice of a fund raising effort to keep the operation going another year, we thought we’d check in on where things stand. Jeff Smith’s chat with Rebecca Lessard was originally published in the February 2015 issue of Traverse, Northern Michigan’s Magazine.

Tell us about the birds you work with. Why do they end up in your hands?

Often the birds have some kind of disability. A flight injury, like a broken wing or a blind eye. But sometimes the disability is behavioral: they are human imprinted because they’ve been found or stolen from the wild and raised by humans, so they don’t know to avoid humans. People find them on the ground and call me.

How many raptors do you get in a year?

Typically about 75 to 100. About 60 percent survive to be released. This year, though, was huge. We had 30 red tail hawks this year. My theory is a lot more rodents survived the winter because they could live so well under the deep snow, so in spring we had a huge prey base, and the parent birds were able to feed their young well and a lot more baby raptors survived than normal. So we had a huge population of immature raptors, and they are not good hunters. They were starving. They were literally falling out of the sky.

How many of your birds do you take into schools and the like?

We have 11 program birds, birds that are used to being handled. That allows the workload to be shared, so it’s not intense for any of them. I was going to stop at 10 program birds, but then we added a snowy owl. He is so gorgeous and is really fun to train.

Are program birds released at some point?

No, the program birds all have disabilities that would prevent them surviving in the wild.

So you have been doing some soul searching these past months, trying to chart a new vision for Wings of Wonder. Is that coming into focus for you?

I have been exploring some options with my board and what I envision is moving WoW away from my home and growing it as a place that is open to the public. It would be a place that would allow more volunteers and could offer veterinary students an opportunity to work with birds, which is not part of what they get at veterinary school. It would be a state-of-the-art facility that could have captive breeding programs for endangered species. Also I’d love to see a falconry component—have the bird fly out and come back to the glove, which is a very fun experience. We are open to what the community wants, looking for suggestions and pledges of support. We’re starting to flesh out some of the ideas. It’s a really exciting place to be and even though I don’t know exactly where we will land, I have faith and trust that it will sustain itself.

Learn more about how you can support Wings of Wonder at wingsofwonder.org. Like them on Facebook here.