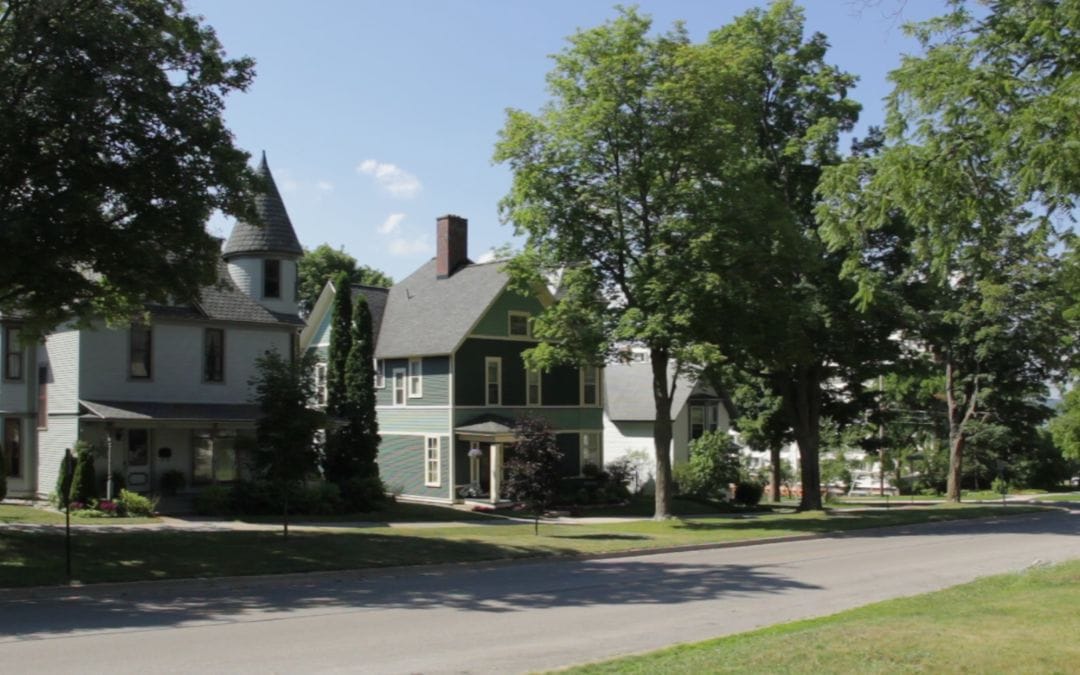 Wexford County housing options range from rural to town living. Because of its vastly hilly terrain and pockets of wetlands, Wexford County proved difficult for early railroad construction and thus was one of the last areas of northwest lower Michigan to become populated. So when settlers finally found their way here in the late 1800s, they arrived to one of the region’s last big stands of towering virgin hardwoods, which sprawled out and around an untouched land wild with lakes, marshes and the lush Manistee River valley.

Of course, the ensuing lumber boom only lasted as long as the timber did, but the region’s economy evolved with the changing times and now focuses on manufacturing and tourism. Much of the land abandoned by the logging companies after the trees were taken became part of the Manistee National Forest, which occupies much of the terrain in Wexford. The landscape here is still very wild, and people who live here love to be so close to those spaces that are once again untouched.

Cadillac is the largest town here, with about 10,000 residents. About an hour south of Traverse City, it’s the economic hub for the county, and a resource for smaller communities in neighboring counties as well. The indelible mark left by the lumber era can still be seen downtown in its historic neighborhoods, home to ornate Victorian lumber-baron homes. Folks who live in town have the unique treat of living on or very near waterfront yet still being within walking or biking distance to downtown businesses and schools. Lake Cadillac is entirely contained within the city limits, and part of Lake Mitchell is in the city as well, making for just shy of 4,000 acres of all-sports lake access right in town.

“I’ve lived in a lot of different places and I’ve never found any place that has everything that Cadillac has to offer as far as outdoor activities,” says Michael Fagerman, a longtime Cadillac resident and broker/owner of Cadillac Realty by Fagerman. “It’s a year-round outdoor recreational paradise. Anyone who lives here is an outdoor enthusiast.”

A majority of people who live in Cadillac live either on the lakes or in neighborhoods surrounding the lakes. Housing stock here ranges from stately Victorian homes in the Courthouse Hill Historic District to more modern homes in the dozen or so subdivisions that have popped up in and around the city over the past 40 years. Lakefront homes and condominiums are popular—there are about 500 residences on Lake Mitchell and shy of 300 residences on Lake Cadillac. These homes are often more affordable in Cadillac as compared to other areas in this part of the state, Fagerman points out. The average sale price of a home in the area is about $100,000, he says.

Outside of Cadillac, Wexford becomes very rural, with many of the county’s 32,000 residents clustered around small-town farming communities like Manton, Buckley, Mesick and Harrietta. The sandy soil here, while challenging for certain crops, has been a boon to corn and Christmas tree farmers in particular, so rows of stalks and evergreens are part of the agrarian landscape. Much of the landscape here, though, is pure Northwoods, with thousands of acres of state and federal forest land. That means opportunities for those who want a home with some acreage and dream of living close to unspoiled nature. “You have a lot of homes on five, 10, 20 acres or more, and most of them butt up against state or federal land,” Fagerman says. “You go out your back door and can just keep going for miles.”