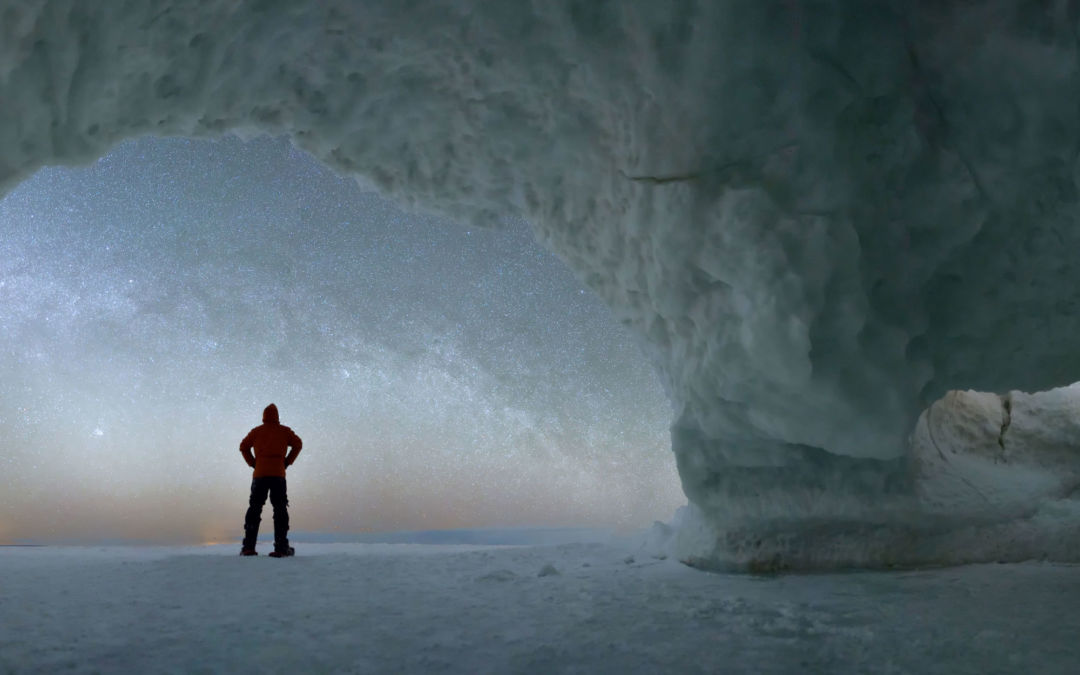 When the polar vortex converged on Northern Lake Michigan in 2014, the unrelenting snow, whipping wind and tumultuous waves gave rise to two-story-high ice mountains and fantastical caves along the Lake Michigan shore. The phenomenon drew thousands of curious people, and one of them was renowned nature photographer Ken Scott, who explored the Leelanau County ice caves and shared images in his book, Ice Caves of Leelanau.

Photos of the Leelanau County ice caves are featured in the February 2015 issue of Traverse, Northern Michigan’s Magazine. Get your copy! 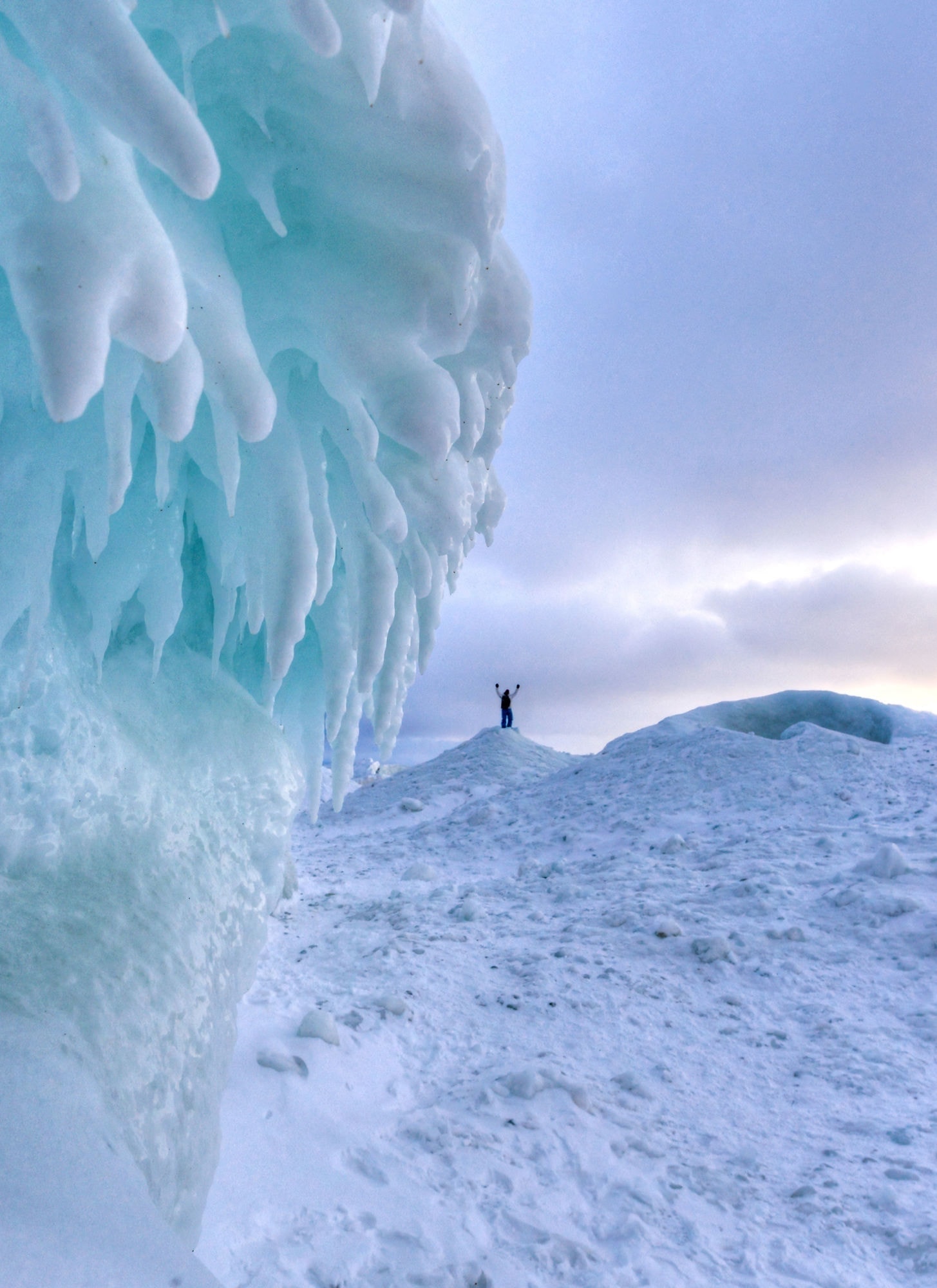 All photos by Ken Scott Photography

So, let’s start at the beginning.  When did you first discover the ice caves?

Well, I didn’t discover them per se. I hike the shoreline all year round and had been there a couple of weeks before, and it was all water. Then the vortex came through, and I saw something on Facebook, people posting images of the ice caves at Gill’s Pier. I think it was like Valentine’s Day before it really formed into structures.

I had been wanting to get to the ice formations at the Apostle Islands because that was what was in the news. But then the vortex came and these ice caves came, and really the bigger story is our story because the Leelanau caves were from scratch, totally in the moment, just ice and snow, totally temporary, not icicles from rock caves. 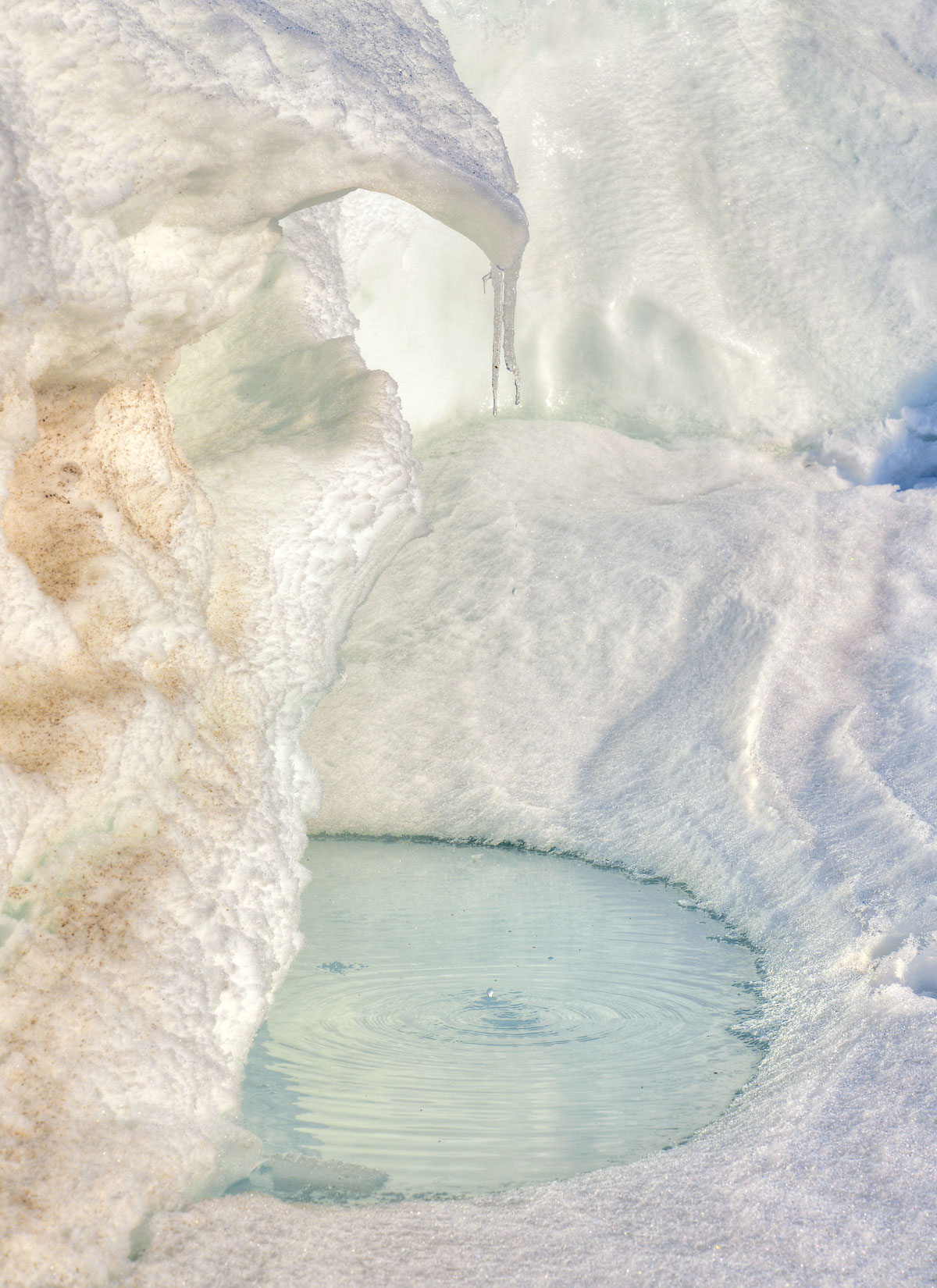 The Gill’s Pier formations had been outed on Facebook already … was it crowded when you first visited?

I’m sure there were people there, but it was like four people. And I remember thinking I will come back again when it’s not so crowded. But of course then it was Presidents’ Day weekend, and there were hundreds of cars there, thousands of people.

How many times did you end up visiting?

Yeah, that’s the most common question I get. Twenty-one times. The last time was in a canoe on May 6. 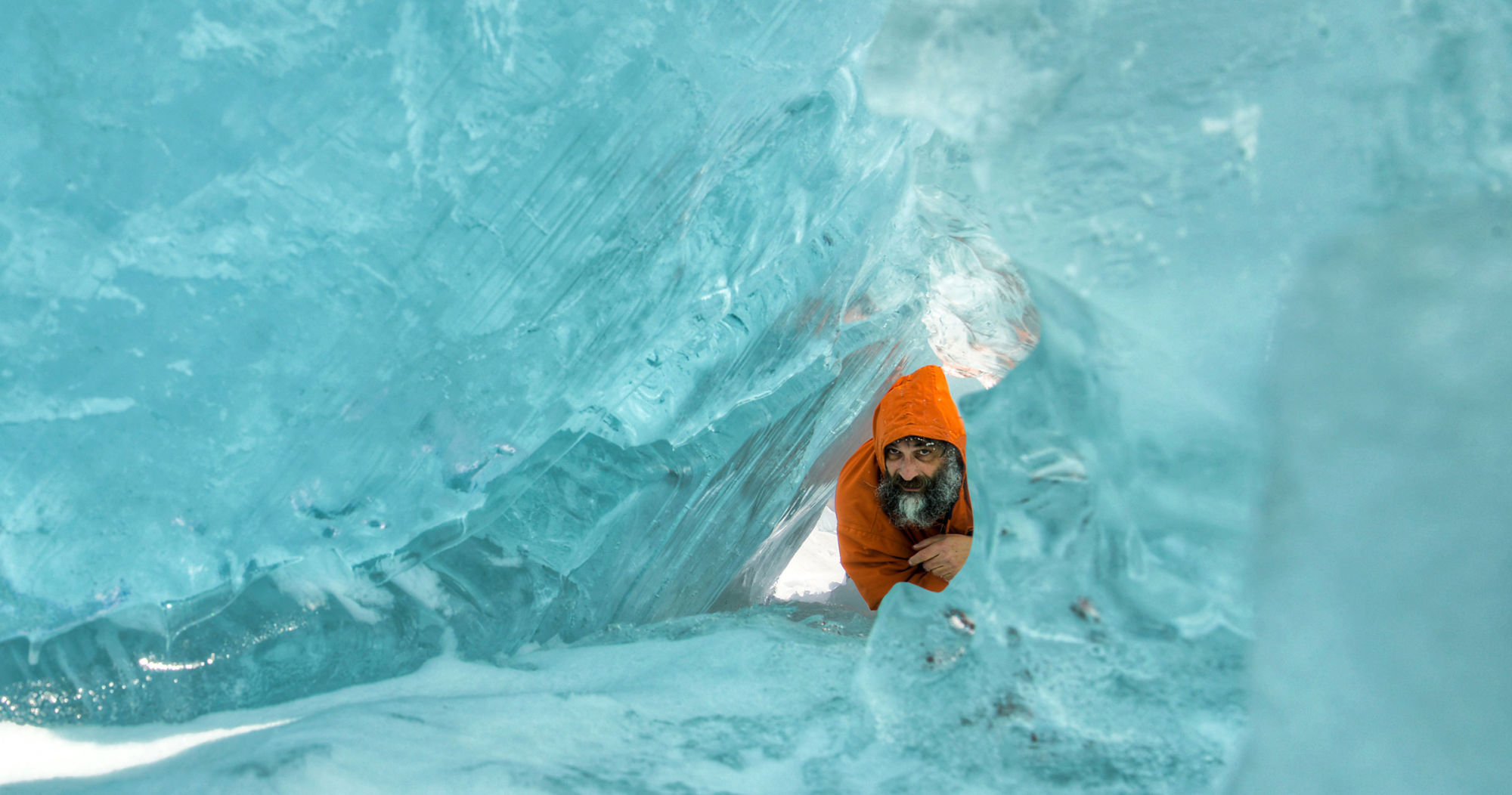 Did you have a project in mind from the start?

No, I was just doing what I do. My life Up North is getting outside and experiencing it. The weather doesn’t matter. In fact, the more odd the weather the better the images. I was just doing my thing and people picked up on it. There are ice caves every year, sometimes big, sometimes not so big. But this year everybody got out and experienced them because everybody else was out doing it.

So you explored the whole Leelanau shore. What areas did you photograph?

The book is a collection of images all the way from Empire around to Greilickville. Actually, some of the most amazing formations were not at Gill’s Pier. The crystal cave image [on the cover of the February issue of Traverse] was not taken at Gill’s Pier. 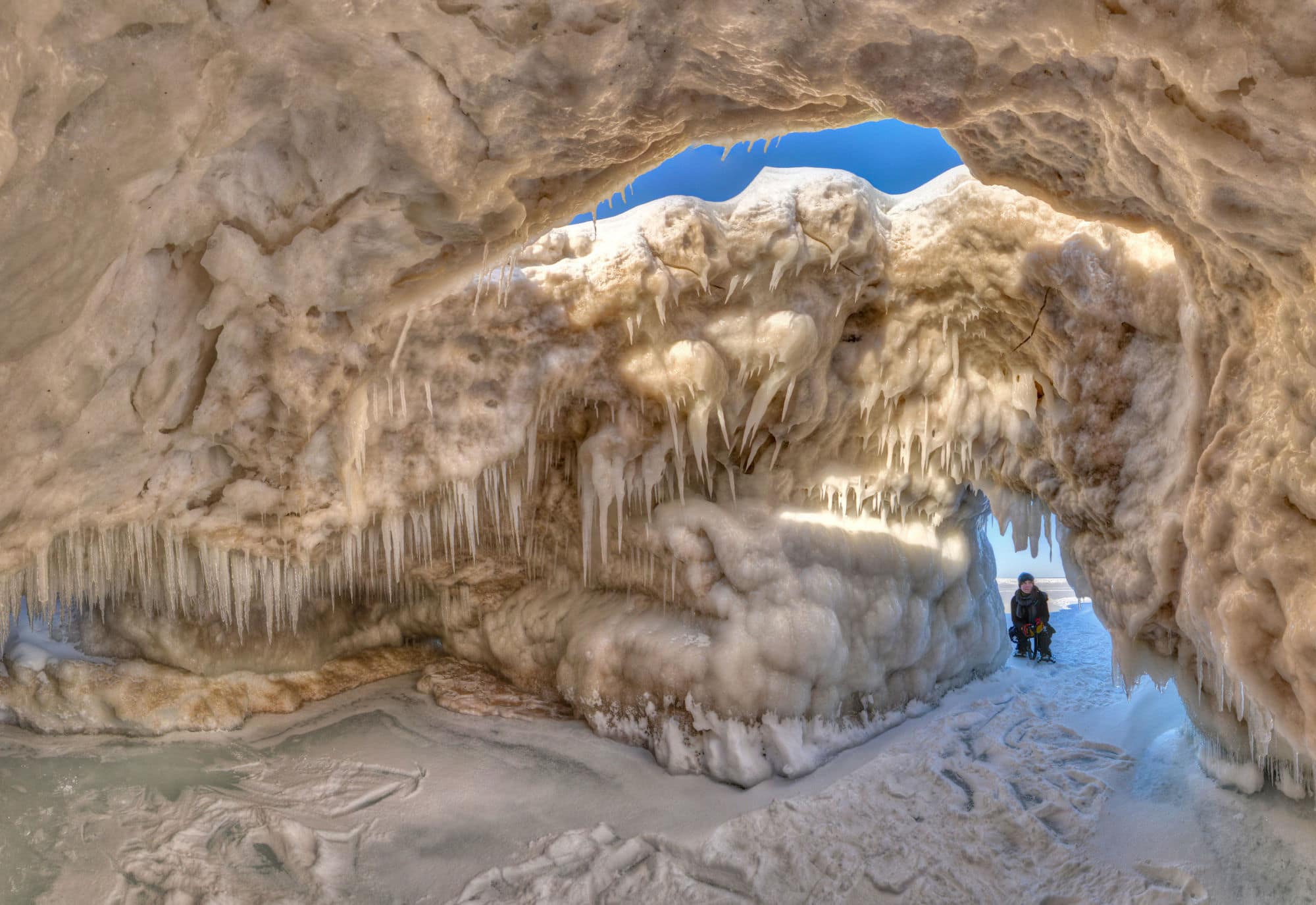 Was there a particular day that stands out?

Well, they all do. Visually there is always something going on. But my favorite time to shoot was in the middle of the night, going out under the stars. We did have a full moon during that time and the lighting was pretty amazing. But there was not a lot of sunshine on the days I went out.

So, as you say, we get ice mounds along the shore every year, but this year was obviously different. What are some of the things that really set it apart for you?

Well, the biggest factor is getting enough of a freeze to where we get ice beyond the anchor ice [anchor ice is in shallow water and goes all the way to the bottom of the lake]. Normally it’s just open water beyond the anchor ice, but when it freezes, that’s when you can get down on the ice and really explore the formations, really get your mind blown. The last time that happened for me was in 2003. 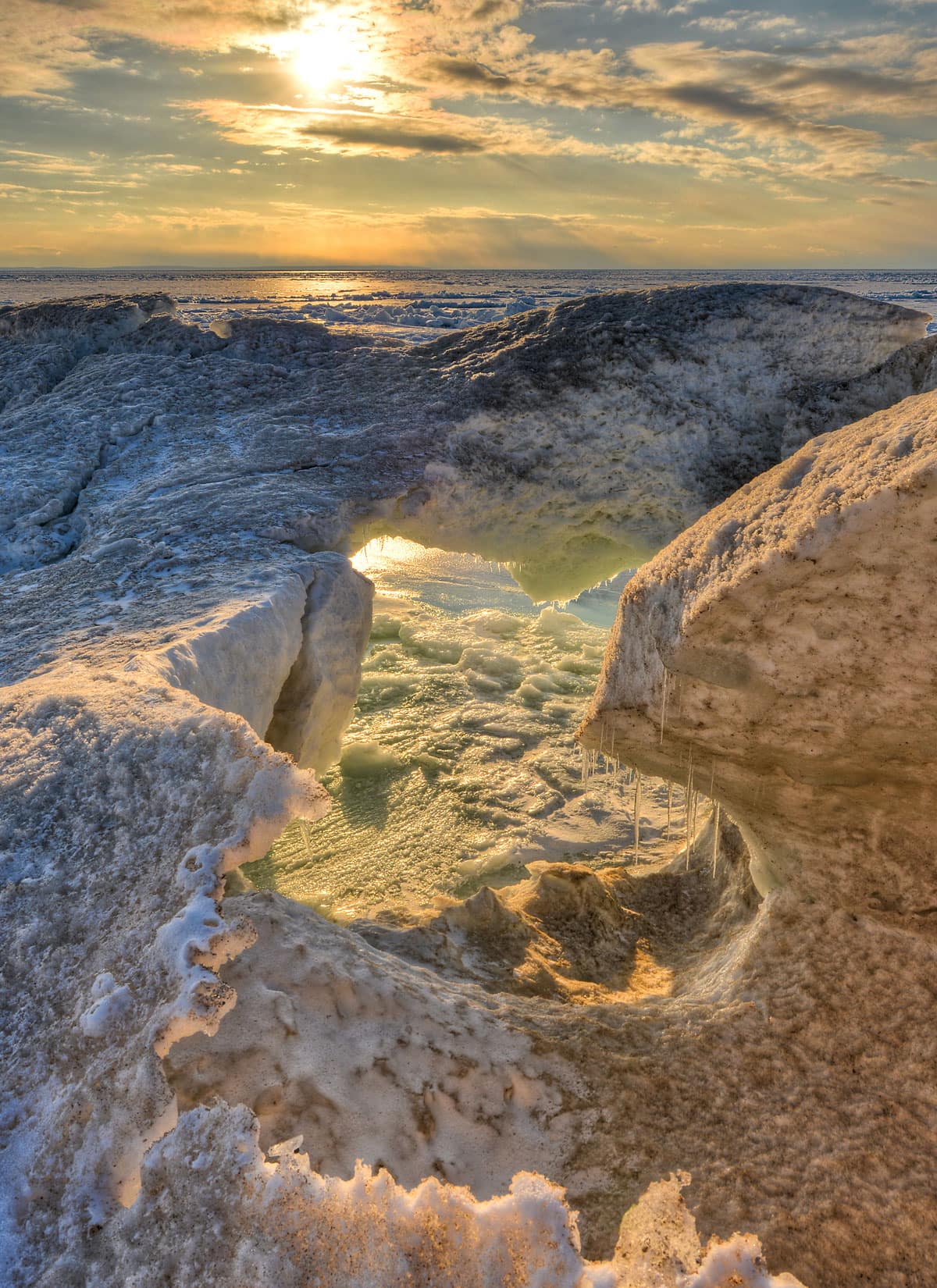 How concerned were you about the stability of the ice or just falling through?

There was definitely a nervous aspect to it because we really don’t know how stable it is. I did not venture far out on the crumpled ice. I just did not feel comfortable with that. You really should have the right gear for that. You know, there was a crazy number of people out there and the fact that it all held together safely for them is very lucky. Amazingly lucky.

How did you deal with all the people who started  showing up?

I actually didn’t go out on the big weekend. In hindsight, I wish I would have, to capture that human element, so I missed out on that one. But to keep people out of the images I would walk farther down the shore or go at odd times.

What was a fun revelation that happened once you got back home and were working with the images? 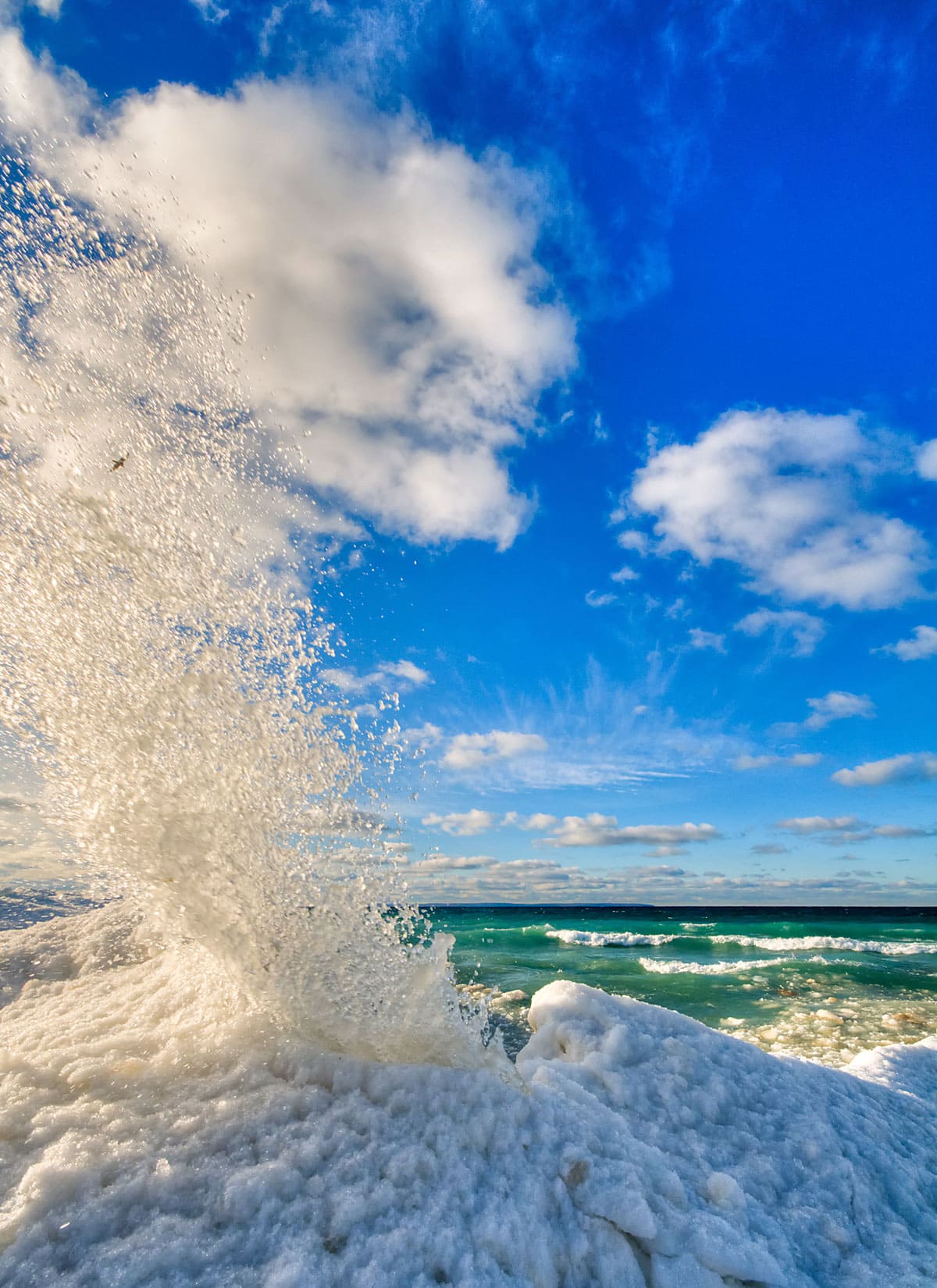 How did the idea for the book evolve?

Well, throughout the season I would post stuff to Facebook, and people would say, “Hey, you should do a book.” And I felt that if somebody really wants to work on a book with me, let’s do it, but I wasn’t going to do one by myself. Then one day Barbara Siepker, of Leelanau Press approached me and asked if I would have 30 or 40 images to do a book. And I said don’t tease me. Leelanau Press made it happen.

Word is it came together fast.

Yeah, we wanted to hit the Memorial Day weekend with the book, so we had like two weeks to do everything to get ready for the printer. We didn’t know if we could do it, but we acted as if we could. But we actually missed the deadline and started thinking July. But the printer said something opened up and if we could get it there by that next Monday we could make Memorial Day, so the pressure was back on. Angela Saxon did the design work and Jerry Dennis wrote an essay, and meteorologist Ernie Ostuno helped out with image descriptions. It was great fun.

And the ice caves book sold.

It is just funny because Barbara was concerned about numbers, and she thought 500 would be good. Then she started taking orders, and those were spoken for pretty quickly, so she upped it to a thousand. We thought that was huge, like, What a risk! And they were gone before we even had them. And that happened a couple more times. It was kind of a problem because we’d plan a book signing somewhere in a bookstore and there wouldn’t be any books. So that happened a few more times, where we’d sell out before the shipment arrived, but I think we’ve ridden the wave now because I actually see them in bookstores now.

Check out this MyNorth video for more views of the ice caves!