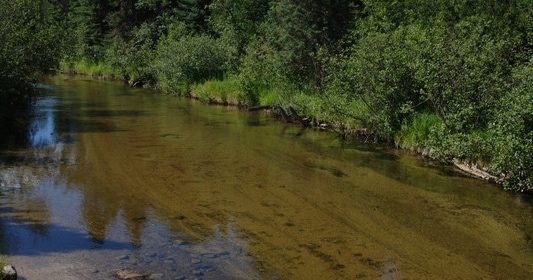 Manistee County outdoor recreation ranges from paddling down the Manistee River to teeing off at the nationally renowned Arcadia Bluffs.

The grand and powerful Lake Michigan is an unmistakable force in the lives of Manistee County residents. The lake is the fifth largest lake by surface area in the world and is so large one cannot see across it when standing on the shore, giving the lake the presence of a small sea. On hot, calm summer days, the lake is a marvelous magnet for families, as people head to cool down at the county’s sandy, publicly accessible beaches, either right in downtown Manistee (volleyball courts, concession stand and pretty lighthouse pier) or at quiet, publicly accessible locations along the county’s 25 miles of shore. The big water is also a tremendous draw for charter fishermen heading out for trophy fish, like Coho, steelhead and lake trout. And of course power-boaters and sail-boaters head out to explore the shore and the open waters on weekends and after work, or spirit away on a midweek day of hooky.

The Manistee River is renowned among river experts nationwide because very few streams as large as the Manistee receive such a high percentage of their flow via groundwater. That might sound like an obscure technicality, but what it means for users of the river is that the water flow and temperature are remarkably stable, allowing fish populations to thrive. The fish stay cool despite summer heat; they stay warm despite winter cold. Taking advantage of that rich ecosystem are thousands of fly fishermen who make annual journeys to these waters, making up one of the Midwest’s most vibrant fly-fishing scenes. State and world record fish have been caught in the Manistee or near its mouth, including the current world record brown trout, caught in 2009. For local paddlers, the cool and steady flow of the Manistee River presents an irresistible and nearby bonus. Manistee residents can easily slip a kayak or a canoe into the river after work or instantly plan a weekend of floating and camping on the water. Trails also trace the Manistee River’s hilly banks, drawing mountain bikers for adrenaline-stoked rides on the singletrack, and hikers for solitude and campfire evenings on the river bank. In Manistee County, 45 miles of river are protected under the Michigan Natural Rivers Act, a testament to the river’s state of wild.

Manistee County embraces 120,000 acres (nearly 200 square miles) of federal and state public lands, comprising fully 34 percent of the county’s area, and mostly made up of the Huron-Manistee National Forest and the Pere Marquette State Forest. County residents drive or hike into the forest to hunt deer and small game, fish in the rivers and lakes surrounded only by forest, snowmobile, ride mountain bikes, run trails, hike, camp, cross-country ski. You get the idea: many choices and all open to local residents because of public lands.

The tiny burg of Onekama, a resort and farming community, sprang up more than a century ago on the shores of not one, but two enchanting bodies of water. To the west is Lake Michigan, vast and powerful. To the south is Portage Lake, which has a channel open to the big water, but which also serves as protected calm for fishing and boating on 3.2 square miles of water. Adding romance to Portage Lake and Onekama is the Victorian-era Portage Inn, a lakeside resort dating back 100 years and having as its centerpiece, a majestic hotel with reaching columns and classic resort architecture. For locals, Portage Lake is an instant-plan destination for after-work evenings of fishing with friends, and a beautiful place to take the kids for a steady dose of beach time.

Located in the Manistee National Forest, the Big M Pathway trails roll through hardwood and pine forests of Udell Hills and offers occasional scenic visas. The 35-plus miles of well-marked trails (including 25 miles of singletrack for mountain bikers and hikers and 18 miles of cross-country ski trails) were developed in the early 1950s as one of the first Nordic trail systems in the United States. When the snow falls, the Big M becomes one of the state’s premier cross-country ski trail systems, groomed for classic skiing by dedicated volunteers.

The Grand Traverse Regional Land Conservancy teamed up with the International Mountain Biking Association to construct a professionally engineered 15-mile trail just north of the Arcadia Bluff overlook. Riders have given the trail high marks for good flow, and it has become a regional destination for riders.

Golfers looking to make a life in Manistee County have nine nearby courses on which to play their favorite game. The highest profile course is the nationally renowned Arcadia Bluffs. Laid out along a bluff on the Lake Michigan shore, the links evoke the history and tradition of the sport’s earliest and most legendary golf courses in Scotland. Other popular courses include Manistee National, Chestnut Hills and the Manistee Golf and Country Club. All options make the most of Manistee’s rolling terrain.