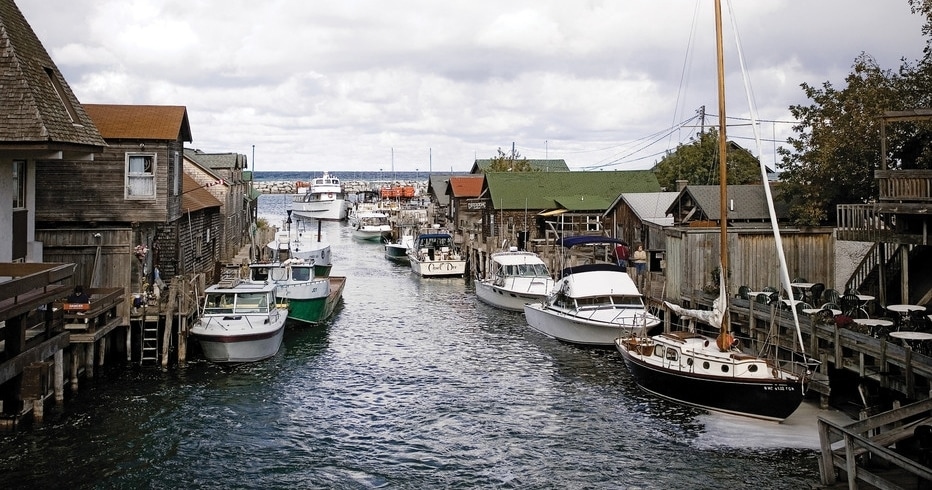 According to one local legend, Leelanau County is named for an Ojibwe-inspired word meaning “delight of life.” But despite this legend and its origins being a bit of a mystery, no one would argue with the sentiment behind it.

A misshapen triangle jutting out into Lake Michigan to form the little finger of Michigan’s mitten-shaped lower peninsula, Leelanau boasts 151 miles of shoreline and is home to miles of freshwater beaches, inland lakes, crystal-clear rivers and streams, dense northern forests, vineyards, orchards, historic farmland and Sleeping Bear Dunes National Lakeshore. The undulating topography is the ancient, slow work of glaciers, which carved up the earth and left behind lakebeds and plateaus of sand and sediment thousands of years ago. It’s a land of beauty that ranges from subtle to spectacular—the kind of place that does make life delightful.

See Sleeping Bear Dunes National Lakeshores from the air in this MyNorth video!

In general, people who live in “the County,” as it’s known in the region, live close to the land. They may choose to have a walkable lifestyle in one of Leelanau’s small towns, or they may make their home way out in the woods, but either way, they are here because they want the great outdoors just beyond their doorstep. But living here also comes with access to amenities like good schools, great health care, and a rich cultural scene with an emphasis on the visual and culinary arts, There’s a strong sense of community here, too, in which folks take great pride.

When it comes to Leelanau’s distinctive features, the biggest is Sleeping Bear Dunes National Lakeshore, which occupies a long stretch of the county’s Lake Michigan shoreline and is a major draw for tourists in the summer—but also a year-round playground for those who live here. The county is also considered Michigan’s own wine country; the microclimate and terroir here are a natural fit for wine grapes, and there are now 26 wineries on the peninsula (with more opening nearly each year). History is an important facet here, too: the area was first settled by Native American tribes (the Grand Traverse Band of Ottawa and Chippewa Indians has its offices in Leelanau’s Peshawbestown), and over the centuries has been home to lumber boom towns, fishing villages and some of Michigan’s early resort communities.

The population is about 21,000 in Leelanau County, and many residents live in townships and unincorporated communities. With about 600 residents, Suttons Bay is the most “year-round” of the Leelanau villages with a proper downtown. It’s just 20 minutes northwest of Traverse City, via scenic M-22, and sits on the sunrise side of West Grand Traverse Bay. There are no parking meters or stoplights in town, a hint at the easy-going pace of the community (which echoes that of Leelanau at large). The historic, walkable downtown has all the essentials, plus a beautiful public beach and marina, the 1920-built Bay Theatre cinema, the terminus of the Leelanau Trail (a paved bike path that travels all the way to Traverse City), and an array of specialty shops, restaurants, and art galleries.

With so much waterfront, many of Leelanau’s villages attract vacationers in the summertime, but to simply sum up beachy destinations like Northport, Glen Arbor, Leland, Omena and Empire as “tourist towns” would be a mistake. Each has its share of souvenir shops, sure, but is also home to a tight-knit community of year-round residents and has its own distinct flavor. Omena is tiny but richly historic and has a million-dollar view of West Bay. Northport, way up at the tip of the peninsula, is undergoing a bit of a renaissance, with new shops and restaurants breathing energy into the town. Leland is synonymous with Fishtown, a century-old Lake Michigan fishing village whose weathered cedar-shake shacks have been repurposed into shops and delis. From its spot on a strip of land between Lake Michigan and Glen Lake, Glen Arbor is smack in the middle of Sleeping Bear Dunes National Lakeshore. And Empire, with its magnificent in-town beach, is also a bit of a farm town and has a quirky, artsy vibe.

Travel inland and the scenery shifts to that of forest-bordered farmland, where wine grapes, hops, corn and other crops turn the land into a patchwork of green rows during the growing season. Communities such as Cedar, Lake Leelanau and Maple City are still very much rooted in the region’s agricultural heritage. Each is home to a handful of stalwart independent shops and markets where residents can pick up essentials without having to drive into nearby Traverse City.