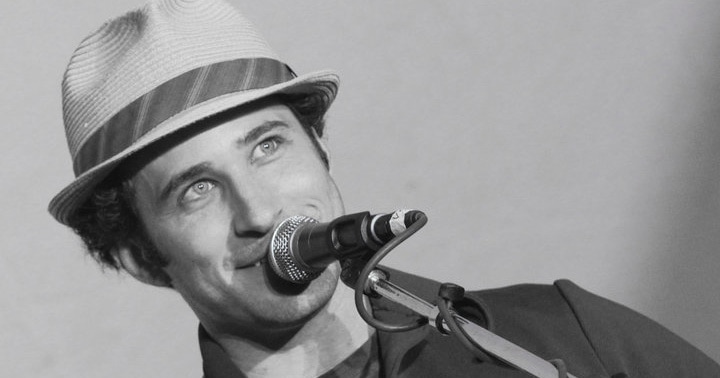 [New: We chatted with Davis in Jan. 2017 to hear about life after The Voice.]

Michigan musician Joshua Davis has been a professional musician for more than 15 years, working as a solo artist and in bands like Steppin’ in It. He’s also toured all over the country and produced several CDs. On Monday, February 23, 2015, he stepped onto a national stage for the blind auditions on NBC’s show The Voice. As soon as Joshua started his performance two of the four coaches, Blake Shelton and Adam Levine, turned their chairs indicating that they wanted him on their team and he had advanced to the next round.

Joshua had never watched The Voice before, but when he got a call from the show asking him to come out to Hollywood and audition he took them up on the offer. “It was a total shocker to me. I was surprised that they were interested in somebody that was doing what I did,” he says. “I turned on the show and I watched some episodes of it with my family.” He says that he has “a real distaste for reality television in general” but that The Voice is a lot different from other reality TV out there. “They don’t focus on embarrassing someone and they’re not there to knock anybody down.”

“I felt comfortable with my 9-year-old watching it and getting excited. And so that was a point where I was like, ‘Yes okay I can do this.'” Joshua says. MyNorth caught up with Joshua over the phone right after the chairs turned for him in the audition.

When you had two people like Blake Shelton and Adam Levine each begging you to be on their teams, how did that make you feel?

It was a lot more intense than I thought it would be. I’ve been performing for a long time and I’ve been in a lot of really interesting situations and I’ve worked in a lot of different circumstances. In this situation when I was thinking about it beforehand it didn’t seem like it would be as intense as it was. To be up there and for those two going head to head it was wild. I felt grateful that they turned.

It was a really hard decision to make. A lot was edited out for television but the whole process took a lot longer and Adam was really really selling it and I had previously kind of made up my mind that if Blake turned I would go with him just because I felt a little closer to his genre, I felt like i identified with him a little bit more, but man it was hard to turn Adam down. It was a really wild experience. I am excited to be working with Blake.

When you were performing you seemed like you were pretty at ease, at least to a viewer like me. Were you feeling pretty confident on stage? Nervous? I know you’ve been a performer for a long time but how was this performance different?

I have been a performer for a long time so a lot of the time the way it goes is when I hit the stage, I’m on auto pilot and I just kind of do what I do and the others kind of fall away. I am used to playing two sets a night, three nights a week on average, so spending all this time building up to this one moment that’s like two minutes long that’s where the anxiety was, in that long process of getting to the point where I was going to walk on that stage. When I finally walked on the stage I said, ‘oh this is what I do’ and the rest of it was all new territory. So when I finally got out there I felt really comfortable because it’s what I do, but there were definitely some nerves beforehand.

All of the coaches are pretty mainstream Top 40 artists and performers. You’re a folk singer, you’re from Michigan… Are you worried about becoming too mainstream or selling out?

That’s a good question. I do what I do. I think the fact that the show found me and brought me out there points to the fact that they want more organic, more real, more raw music on their show. The fact that those guys turned around for me, with me singing this Bob Dylan tune that was made popular by The Band, the roots rock band from the ‘60s and ‘70s, points to the fact that they feel like what people want to hear is some more real music. Getting away from a lot of the Top 40 mainstream stuff and hopefully moving more in organic direction. I’m grateful to be a part of that transition and what I hope to be a movement.

I feel like a lot of the contestants are so different and from varied places. It makes for a completely different kind of show, which I am pretty impressed with NBC for doing.

I am too. Like I have said I am not a fan of reality shows in general but this one really does a nice job and they are taking some chances and they are putting themselves out there and the diversity and talent of the other contestants is absolutely incredible.

Michigan has a pretty big music scene. Have you talked to the other contestants about what the music scene is like where they’re from? Have you exchanged notes and compared the similarities or differences?

The pool of contestants becomes this really tight knit community, it is a competition but thankfully, in the spirit of what we do here in Michigan with music, it’s all about cooperation and all about collaboration and everybody’s got each others back. It’s a lot of fast friends and so I’ve learned a lot from the other contestants about the different reasons and the different places that they’re from, the different styles of music that they play, their backgrounds, it’s been great.

And are you originally from Traverse City?

I was born in Marquette and then I grew up in Metro Detroit and then I spent the last 15 years in Lansing and my family and I moved up here about 2 years ago. I kind of think of the whole state as my hometown.

You’ve been up here for a couple of years so can you talk about the differences in the music scenes in Northern Michigan versus downstate? If there are any?

I think there are differences. If you get in more of an urban setting there’s going to be a little bit edgier kind of sound and there’s a bigger pool of musicians in a more densely populated area. Lansing to me is like one of the most incredible music spots in the country, by far. I have traveled all over the country and I’ve never seen anything like the amount of incredible musicians and songwriters per capita in Lansing.

But it’s like that up here too. I think Michigan has some really great growing community musicians in Traverse City. There’s a lot of great stuff going on here and all over Michigan and I think that spirit of building community, that reciprocal enthusiasm where people are bouncing ideas off of one another and that ability to push the whole thing forward and not just further your own career is really what makes Michigan stand out as a music hub.

Last question I swear! Has Blake lived up to your expectations as a coach?

In the small amount of time I’ve spent with him so far, the thing I really like about Blake is that he’s really disarming and he’s really funny. He kind of eliminates any kind of nervous awkwardness, he’s good at cutting it all away so you can get down to working and that’s one of the things I like most about him. He also knows Nashville really well and as a songwriter Nashville is a really important spot for me to kind of build some bridges. I like the way he speaks to a song, he knows a good song when he hears one, he’s a really good-natured, funny guy.

Have you convinced him to come to Traverse City for a visit?

He’s been to Traverse City. They didn’t show this but in the auditions he mentioned that he had played the casino a few times early on in his career and he remembers Traverse City.