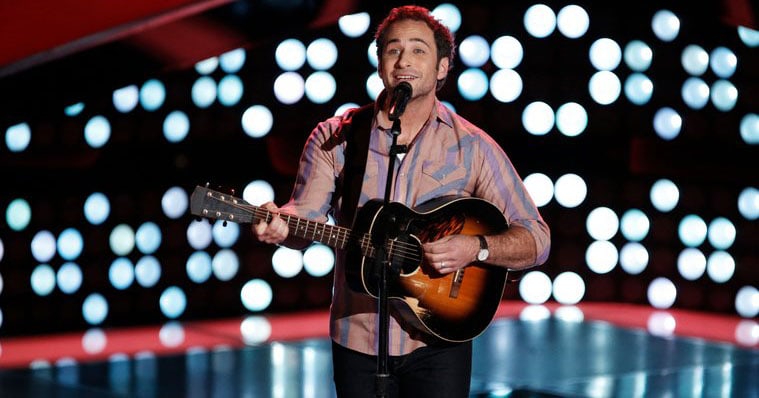 Traverse City musician Joshua Davis advanced past the blind auditions to the next round of NBC’s The Voice in the premiere of the eighth season on Monday, February 23, 2015. Joshua’s performance was one of the last three of the night and he performed “I Shall Be Released” on The Voice stage.

Seconds after he started singing Adam Levine and Blake Shelton immediately hit their buttons indicating that they wanted him on their team. The camera cut to backstage where his family cheered after the two chairs turned.

Although the other coaches didn’t turn their chairs, at the conclusion of the performance Pharrell Williams and Christina Aguilera both offered their opinion.

Christina added that she thought he would be a better fit for Adam or Blake but that, “you have so many different textures and sounds in your voice.”

Then it was time for the two coaches to make their pitches. Blake Shelton went first.

“I felt like I was curled up next to a fire or something when you were singing the lower parts of that song,” he said. “It’s crazy the way that you’ve developed this sound, it’s so different than anything else we’ve seen come across this stage, dude. I would love to have a chance to work with you.”

Adam continued with the praise.

“I heard so many things going on with your voice that were so soothing and inspiring,” he said.

He continued, saying that although he was from the world of pop his “roots are very much in what you love as well.” “I feel like I was getting back to something that I’ve been missing and something that is so close to my heart,” he said.  “It would just mean the world to me to have you on my team.”

Despite Adam’s best efforts, in the end Joshua chose Blake Shelton as his coach.

The Traverse City musician will appear again on The Voice after the blind auditions are over in the “Battle Rounds.” Tune in to The Voice on Mondays and Tuesdays at 8 pm on NBC.