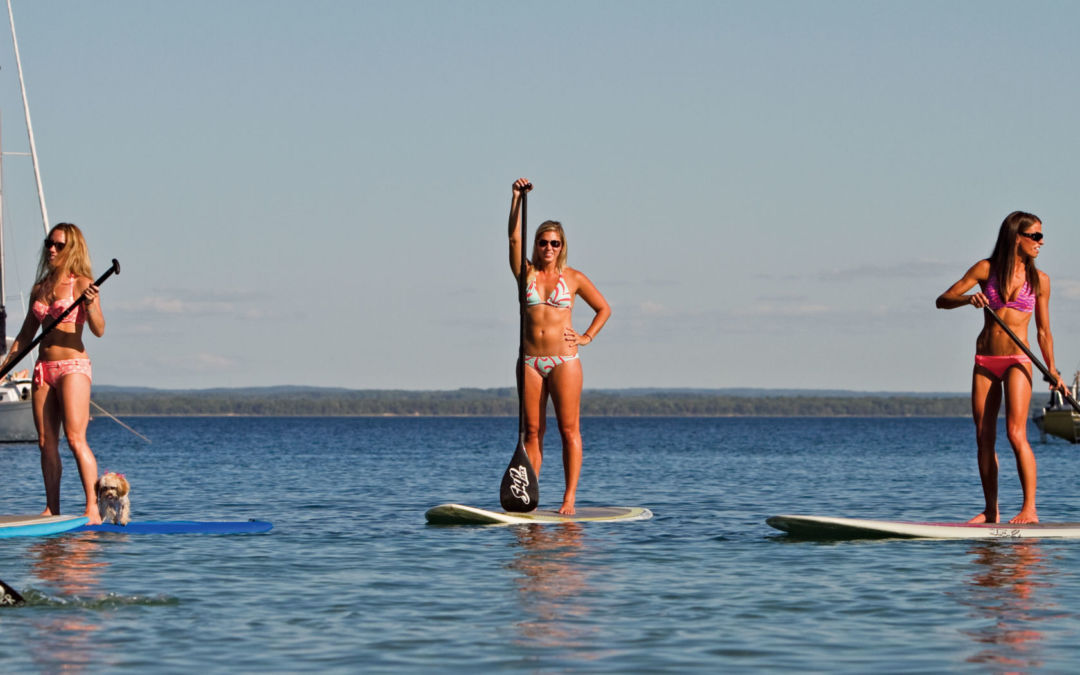 Grand Traverse County trails can be found in all kinds of preserves, parks and public spaces, and some great hiking can be had here—sometimes without even leaving Traverse City limits. In fact, the trails at the Grand Traverse Commons are within walking distance of some downtown neighborhoods; the “Commons” was once the campus of a 19th-century state mental hospital but now serves as Traverse City’s unofficial Central Park, with dozens of wooded trails and sweeping hilltop views of the area. Boardman Lake Trail is also close to town; the two-mile path along Boardman Lake starts next to the Traverse Area District Library. A few favorites for longer adventures: Sand Lakes Quiet Area in the Pere Marquette State Forest offers 11 beautiful miles of trails; Lost Lake Pathway is a lovely six-mile trail through Lake Dubonnet State Forest; and the brand-new Timbers Recreation Area, just 10 minutes from downtown, is a 250-acre Northwoods oasis with trails leading to frontage on three lakes.

The Traverse area has long been home to a thriving bike culture, with loads of trails and paths for all types of riding: mountain biking, road biking, bike commuting or just laid-back cruising around town. Traverse City’s TART Trail is a paved urban and recreational corridor for leisurely riders and commuters alike; the 10-mile trail spans the length of the city, threading through downtown neighborhoods and along the bay, past beaches, parks and nature preserves. At its western terminus, it links with the Leelanau Trail, which continues on for 18 miles all the way to Suttons Bay. Warm weather means the VASA, the state’s premier cross-country ski trail, becomes the region’s best mountain biking path; a series of loops (5K, 10K, 20K) twist through Pere Marquette State Forest to dish up a challenging mix of terrain and top-notch scenery. And road bikers have plenty to love around here, especially on Old Mission Peninsula, where gorgeous views combine with rolling terrain to challenge and delight riders. Cherry Capital Cycling Club welcomes riders of all ages and interest, and keeps its calendar packed of fun group outings.

Considered one of the best trout streams in Michigan, this roughly 40-mile-long river gets its start outside of G.T. County, in Kalkaska, before meandering through the Traverse region and eventually emptying itself into West Grand Traverse Bay. Along the way it winds through the lush Boardman River Valley, Fife Lake State Forest and past a handful of public and private campgrounds. The glacial hills and sandy soils of the river’s watershed have historically limited agricultural development along its banks, so the waters run clean and clear. While known mainly as an excellent trout stream, salmon and steelhead also run seasonally in the portions of the river closest to the bay, north of the Sixth Street dam; Boardman Lake, a natural lake south of downtown that the river passes through on its way to the bay, is also a great fishery for warmer-water fish. The Boardman is also a great spot for canoeing and kayaking, and one can spend a daytrip paddling the entire 25-mile section between “the Forks” bridge (just below the junction of the river’s north and south branches) and Boardman Lake, with a few portages. Ranch Rudolf, a private livery, also offers trips, no portaging required.

The defining feature of Grand Traverse County, at least on a map, is Grand Traverse Bay—a 32-mile-long, 10-mile-wide arm off Lake Michigan that splits into two lobes around Old Mission Peninsula. Downtown Traverse City sits at its base, and thus the water acts as a sort of visual anchor in the city; wherever you are, you are not far from the shore. In the summertime, West and East Bay come alive with activity, from powerboats to paddleboards; beaches up and down the bays’ shoreline draw locals and vacationers alike, who prefer the calmer, warmer waters here compared to the much-colder and big-waved Lake Michigan. Power Island, in the middle of West Grand Traverse Bay, is one of the bay’s often-unnoticed gems; the 202-acre county-owned island is essentially an island park, accessible only by private watercraft and offering sandy beaches, wooded hikes and rustic camping.