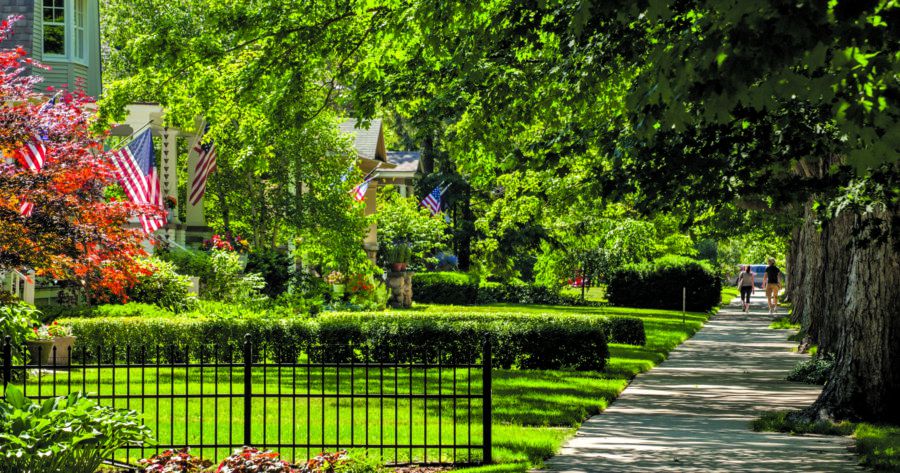 Grand Traverse County housing options are diverse and folks who live in Grand Traverse County can have their cake and eat it, too. As the region’s economic heart, Traverse City has all the urban amenities, but beyond the city’s limits is rural living at its best. The region has long attracted young retirees, but in recent years, it’s also become popular among Millennials who desire the outdoors lifestyle but don’t want to give up walkability and culture, too. Between 2000 and 2010, while Michigan was the only state in the country to lose population, Grand Traverse was one of the few counties to post population growth: a whopping 12 percent at that. The median home price in the area in 2014? $175,000, up from $141,000 just three years ago.

Many choose to live in Traverse City to be close to work and schools as well as to enjoy a walkable, bikeable lifestyle. For that reason, the housing market can be tight in town. “There are lots of micro-markets within Traverse City,” says Kimberly Pontius, executive vice president of the Traverse Area Association of Realtors. Pontius notes that certain neighborhoods, such as Slabtown and Central Neighborhood, are in high demand because of their proximity to the hospital, downtown, the waterfront and schools. Others, like Washington Street and Sixth Street, are in high demand because of their lovely historic homes. Urban developments, ranging from the historic rehabbed residences at the Village at Grand Traverse Commons to the riverfront condos and townhomes in the city’s Midtown neighborhood These “micro-markets” can even break down block by block, or whether they’re on one side or the other of a particular street. Prices within Traverse City can vary quite a bit for these reasons.

For those who want to live fairly close to town but don’t mind forgoing the walkable lifestyle, living out in one of the county’s townships provides access to city life but often for lower prices than what one might find in town. Acme and Garfield Townships, for example, are about 15 minutes each from downtown Traverse City, but home prices are, on average, less than those in the popular downtown neighborhoods.

Beyond the city, Grand Traverse County expands into rolling countryside speckled with lakes, forests and farmland. Those who live here aren’t far from everything in TC, but can have a home with some acreage, too. Fife Lake, Kingsley and Interlochen (443 and 1,480, respectively); beyond that, homes are spread out in the townships, sometimes with small clusters of development here and there. And the best part? You don’t have to go far for that rural vibe. “If you drive out, say, west of Traverse City, you’ll find pockets of suburban development,” Pontius says. “But you’ll also find that house on the five-acre parcel in the woods. And you’re still just five minutes from town.”

As is the case with the rest of the region, there are ample opportunities for waterfront — and waterview—living opportunities, but prices vary depending on the body of water and where on that water the home may be. The obvious draw here is Grand Traverse Bay, but the county is home to dozens of beautiful inland lakes, too, including Long Lake, Spider Lake and Silver Lake which are all-sports lakes and also popular for fishing.

The bottom line when it comes to looking for a home in Grand Traverse County, Pontius says, is to work with someone who really knows the area. “The realtor professional has tools to do comparative market analysis,” he says. Even with a tight market in some parts of the county, working on a localized level and keeping the region’s diverse housing options in mind means there’s options for all.