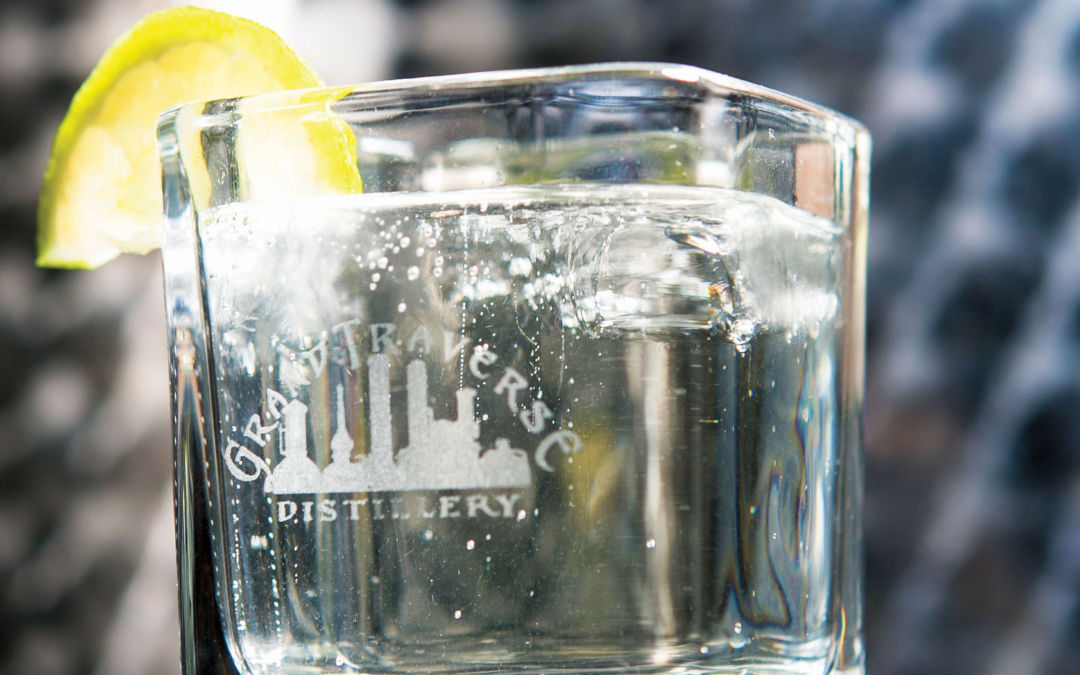 Get hip to the next big thing in artisan beverages: craft spirits. From grain to bottle, these Northern Michigan micro-distillers conjure beverages that will make your transition to the spirit world  an ultra-smooth affair. Find the original feature for this article in the February 2015 issue of Traverse, Northern Michigan’s Magazine. 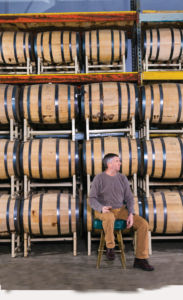 Traverse City – Kent Rabish doesn’t believe in shortcuts. Consider the arc of his business startup. It was way back in 2001 when Rabish, a former pharmaceutical salesmen, first decided to leap into the spirits business. At the time there wasn’t a single craft distillery in the Midwest. He spent fully five years honing his vision, sharpening his business plan and strategy and putting his facility together. By the time he got his still up and running his was just the 30th artisanal distillery in the country to open its doors.

As for the batch of straight rye whiskey that Rabish bottled for Christmas 2014, he displayed that same ethos of studied care. Since 2008 he has watched the rye develop all the way from grain to bottle. And Rabish isn’t the only one who’s been eagerly awaiting its debut.

“Right now, if I had three pallets of whiskey ready to ship, I could make 10 phone calls and they’d be picked up tomorrow for cash,” Rabish says. “Whiskey is that in demand.”
Of course, turning out a quantity like that is a tall order for any small distiller—one, in fact, that Rabish can’t fill at the moment. But he sees the 250 barrels he’ll put up this year as an investment in his future. “It’s a little bit like a 401K,” he jokes. “You start putting money into it, and it doesn’t seem to do anything for a long time. Whiskey is a long-term proposition. It’s our future.”

For now, the present is filled with things like vodka and gin, which don’t require the same kind of aging. But whatever the spirit, Rabish’s insistence on doing everything in-house has all but guaranteed his product will find a home. He’s already received visits from international wholesalers, who have insisted on reviewing his log sheets to trace every batch from the “mash tun” to the barrel. Rabish’s Grand Traverse Distillery is one of the few shops in the United States that can satisfy that kind of sophisticated taste.

The only detail lacking in Rabish’s detail-oriented business is, unfortunately, a void he can’t fill. Shortly after he got into the business, he learned his grandfather, a Saginaw Valley grain farmer, was a well-known Michigan moonshiner, and Rabish has yet to uncover a single artifact from George Rabish’s previous experience in the business. “I would have loved to have his still in here,” Kent says. “It would have been a great prop. But someone in the family just crushed it and got rid it of it.” Even so, Kent managed to work in one homage to the past: His coveted 100 percent rye whiskey bears the name “Ole George.” 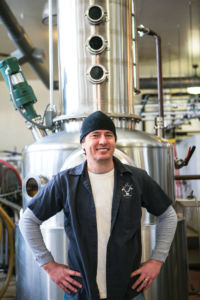 Old Mission – Gather all the Northern Michigan brewers and distillers together, and you wouldn’t blame the newcomers for feeling starstruck when Mike Hall enters the room. At 50, Hall is still too young to qualify as a living legend. But suffice it to say he was brewing and distilling craft beer and spirits before either had earned “movement” status.

Hall’s own brewing bio is near worthy of memoir. He brewed his first beer with his dad when he was 13; helped build the family still at 18; crafted his own beer and spirits in college, using enough glass pinched from the school chemistry lab to basically build “the still from M.A.S.H.”; bummed around Europe, splitting time between his sculpting (Hall also holds a BFA), brewing, and distilling hobbies (the latter of which earned him the attention of British police); and eventually landed a spot studying with the great Peter Austin, the British godfather of the microbrewing movement. In the decades following Hall’s return to North America, more than 50 breweries and distilleries would end up being touched in some way by Mike Hall, who now finds himself a first-call consultant for those jumping on the microbrewing bandwagon. All that said, Hall’s résumé hardly captures what he’s bringing to the art and craft of craft alcohol.

Ask the now head distiller with Civilized Spirits about his chosen path and Hall is likely to start sounding a bit like a guru. “When I brew, I feel like a badass. When I distill, I become a gentleman,” he says. He’ll tell you how he appreciates the “quiet” that distilling, his current focus, lends to his life. He’ll share his frustrations with the craft industry’s emphasis on traditions and recipes that limit distillers’ creativity.

Lately, Hall has been poring over naturalist texts on native Michigan botanicals in hopes of finding inspiration for a new gin. After that, he’s got his eyes set on a Michigan riff on Chartreuse—a mystical, monk-crafted French digestif made from a secret recipe dating back to the 1700s. “You ever had Chartreuse?” Hall asks. “It’s iridescent green and tastes amazing. But be careful; it’s rumored to make you dance in your underpants.” With Hall leading, that’s a dance that many a Michigan craft drinker can’t wait to try. 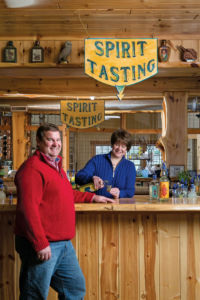 Lake Leelanau – Mark Moseler doesn’t mind being labeled the wild child of Northern Michigan’s distillery scene. Of course, with offerings like a gin infused with Jack Pine and lavender and a Mackinac Island Fudge chocolate liqueur, and a horseradish vodka, it’s not really a rep he can avoid, and it’s a rep that’s giving him niche-market renown.

“I never knew there was this cult of Bloody Mary people across the Midwest,” Moseler says. “It’s like that horseradish vodka has become everybody’s secret ingredient. Now I’m the horseradish king of Leelanau County.”

Moseler, a former history teacher, often finds himself looking to the lost history of the spirit world for fresh ideas. The horseradish vodka that’s become his top seller comes from a centuries-old Eastern European spin on the region’s signature drink. And the new absinthe he’s working on? Mark found that recipe buried in an obscure 17th-century Swiss text. But he’s just as likely to take a chance on something new, especially if he can find the inspiration right here in Michigan. When Moseler noticed there was a glut of Michigan sugar beets, a crop often used for baiting deer, the lifelong hunter decided to whip up a batch of sugar beet vodka. And a trip to NJ’s—a Lake Leelanau grocery with an Indian deli—sparked the idea for his now popular Northern Roots ginger liqueur.

Moseler’s adventures in distilling are made possible by his German-built Christian-Carl hybrid still, a three-piped copper contraption that looks like something from a steampunk novel. With three distilling columns of different lengths, he can make “damn near anything” with it. And at 180 liters, less than a quarter of the size used in most micro-distilleries, it’s nimble enough to allow for small batches that don’t risk a whole lot of time and money if an idea doesn’t pan out.

Luckily for Moseler, most of the concoctions draining from the spigot of his still haven’t missed the mark. Next up for this self-styled DIY distiller: a vodka made from Leelanau Peninsula cherries that Moseler, not a vodka drinker, calls the smoothest he’s ever tasted.