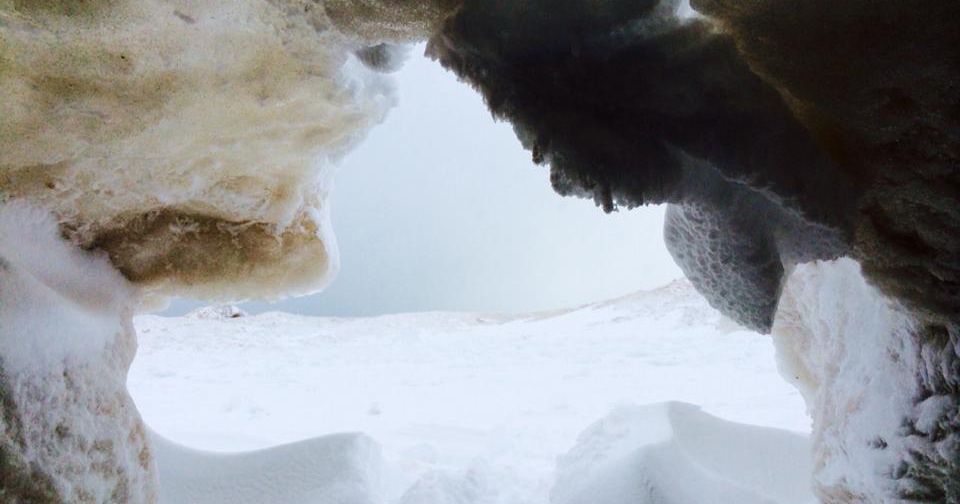 Last week an ice caves video emerged on Facebook news feeds around Northern Michigan and beyond. The 30-second video takes the viewer inside an ice cave on the shores of Lake Michigan. The Michigan ice caves were a phenomenon that occurred last winter and received national attention for their awe-inspiring natural structures. There was speculation about whether the caves would repeat themselves in this winter, but the video gives ice cave enthusiasts hope for more.

The man behind the camera was Leelanau Adventures owner, Eric LaPaugh. MyNorth’s Eliza Foster checks in with Eric to find out how he discovered the ice cave and to learn more about his video. Eric reminds people about staying safe while exploring the ice caves and shares tips on his Facebook page.

Were you looking for ice caves when you were by Sleeping Bear? Or were you just exploring the area?

I regularly go out exploring Sleeping Bear to find the #hiddensleepingbear for my guiding business Leelanau Adventures. We only operate in the summer, for now, leading day trips around Sleeping Bear Sand Dunes along with camping and backpacking trips to the Manitou Islands. We specialize in the lesser known spots around SBSD that have just as much beauty and none of the crowd. We also lead multi-day trips out West to places like Yellowstone and Glacier National Parks as well as Alaska. 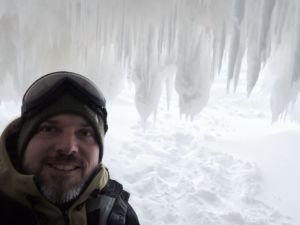 When I arrived at the beach I noticed that there were ice mounds out about 100 yards off the shore and knowing that it had been cold enough for a while now, I thought maybe I would find a small cave. On this day I explored the coastline for about an hour finding small caves and large shelves of ice until I came upon this big cave.

What do you like most about the ice caves?

The best part about the Lake Michigan ice caves are their uniqueness and beauty. It’s incredible to behold the awesome beauty of mother nature. When you’re inside of one the temperature is warmer than outside and it’s also much more quiet, lending the cave a comforting feeling. The glow of the sun through the ice puts off a blue hue to the cave and the icicles that hang from the ceiling remind me of glowing stalactites that hang from the ceilings of caves. I can only describe it as a shrine to mother nature’s creativity.

There was a lot of talk about the ice caves last year so did you expect your video to go viral?

I knew how popular the ice caves were last year, especially up near Leland, and thought that people might be interested in them again. I had not seen or heard any news about ice caves yet this year and thought I may have found the first one. After I posted the pictures and video on my Leelanau Adventures Facebook page and Instagram page, it took off.

Your dog is in the video too, is she a fellow adventurer?

That’s Kelty, yes like the backpack, my golden retriever. Don’t laugh we had a cat named Coleman and we named our son Hayden after a beautiful valley in Yellowstone where we spent our honeymoon. She is one of my hiking buddies, along with my three children and wife.

Keep up with Leelanau Adventures online or on Facebook