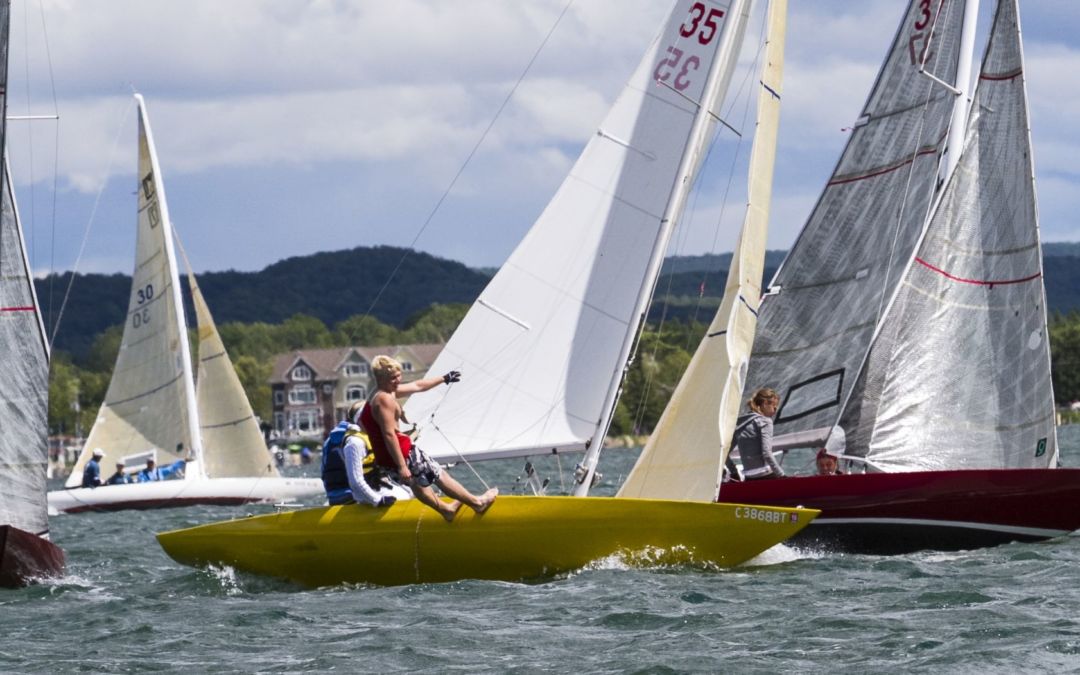 In a region inundated with glorious beaches, the six-mile stretch of unspoiled shoreline at Fisherman’s Island State Park is particularly noteworthy. That’s because it’s tucked within a lovely 2,600-acre park, just a few miles south of Charlevoix, making it more wild and secluded than most of the other easier-to-reach beach spots you’ll find nearby. The island from which this state park derived its name is not actually an island anymore; receding water levels in Lake Michigan have turned it into a peninsula, rich with native wildflowers. Laid-back hikes happen along the three-mile trail meanders through the park’s aspen-birch-maple forests and cedar bogs. Eighty rustic campsites—15 of which are nestled right up to the dunes along the shoreline–make this a superb escape for a weekend of wildlife watching, beach combing and star gazing, though the park is open for day-use, too.

This beauty’s headwaters rise in the lush upper portion of the Jordan River Valley in northeast Antrim County; the river then meanders for 33 miles toward East Jordan, where it finally empties into Lake Charlevoix. It is, simply put, one of the loveliest rivers around, which is likely why it was the first in Michigan to be designated into the state’s Natural River system (a classification that helps with management and preservation). Its reputation for excellent trout fishing, unparalleled scenery, and the cleanest water of any stream in the Lower Peninsula has made it a favorite destination for all types of adventurers, especially anglers and paddlers (the stretch from Graves Crossing to Elk Rapids is a favorite for summertime canoe trips). The Jordan delights beginners and intermediate paddlers alike: at times the river is mellow, and other times, it moves at a fairly swift clip. But it’s gorgeous even when it’s tricky, and a hands-down favorite for many when it comes to Michigan’s rivers.

This four-season resort in Boyne Falls makes the most of the area’s rolling hills, with exemplary skiing and snowboarding on 60 downhill runs and in seven terrain parks, an exhilarating year-round zipline course, and top-notch golf on two beautiful courses. In the winter, Boyne Mountain also serves up ice skating, snowshoeing, 35 km of cross-country trails, tubing, horse-drawn sleigh rides, and even rides on the snow-cat snow groomer. Come summer and fall: hiking, disc golf, horseback riding, tennis, fishing, paintball, a wakeboard camp, and mountain biking on a 32-mile network of trails. Michigan’s largest indoor water park, Avalanche Bay, is also here, sprawling over 88,000 square feet and including the industry’s steepest waterslide. And then, after all that, there’s an award-winning spa, named one of the best in the world by Spa Magazine.

This island, the largest in Lake Michigan, is known for having a rich past: the most notable chapter being, arguably, the period in the mid-1800s when it was inhabited by a self-anointed Mormon prophet and king, and his 300-some followers. But the quirky history is just one facet of this island jewel, which is actually part of a 14-island archipelago. Beaver Island is also beloved for its wild beauty: Sweeping beaches, island forests, and a feeling of remoteness that’s hard to find anywhere else. Highlights include two historic lighthouses, rustic camping, fantastic fishing, an extensive network of hiking trails, a biological station operated by Central Michigan University, and superb kayaking to explore shipwrecks and smaller neighboring islands. A great spot for an overnighter or weekend excursion. Getting there requires a two-hour ride on the Emerald Isle ferry from Charlevoix.

A weekend lift ticket is just $13 for residents at this municipal ski facility just a mile outside of downtown Charlevoix. Named one of the top three small ski areas in the country, the spot is great for families looking to get some quick runs in without breaking the bank (or as an alternative to waiting in the chairlift line with peak-season crowds at the bigger nearby hills). Amenities include six runs, four tow-ropes and a snowboard park, plus cross-country ski trails, snowshoeing, sledding and ice skating. And come summer, Mt. McSauba is a lovely oasis with hiking trails through wooded areas to remote beaches and sand dunes. Bonus: From Mt. McSauba you can stroll right into North Point Nature Preserve, a secluded 28-acre park with 2,700 feet of sandy frontage on Lake Michigan. A network of trails there allows beach access and easy hiking through wooded back dunes.

Michigan’s third-largest inland lake sprawls out across Charlevoix County, covering more than 17,000 acres (26 square miles of water!). Generations of Midwesterners have loved this oasis for its sparkling-clear waters and stunning sunsets, but the lake finally caught the nation’s attention in 2012, when it was nominated for the title of America’s Best Lake by the readers of USA Today—and came in second place to only Lake Tahoe. Renowned for fishing, sailing and power boating, the lake also has a channel accessing Lake Michigan for even bigger water.

Charlevoix County has more than 20 miles of shoreline on Lake Michigan, the fifth-largest lake by surface area in the world. Seeking big water days, boaters head to the Great Lake for sailing, power boating and big game fishing for salmon and lake trout. For boaters, a classic journey is heading out to a set of islands called the Beaver Island Archipelago about 20 miles from the Charlevoix harbor. Boaters drop anchor in quiet, uninhabited bays to swim and fish and spend the night.