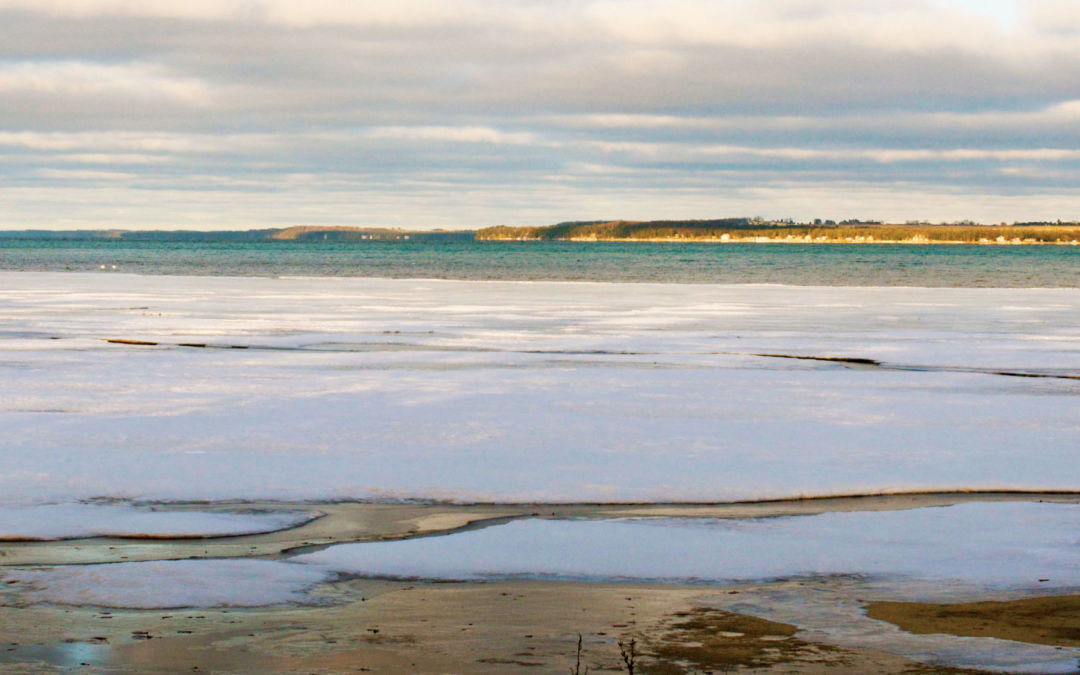 I came every day after that. It was no longer to run or hike or bike the trails. Instead, I came to watch the lake. It started by chance. I stopped the first time because I was tired and bored with running. I ferreted out an old stump to sit on, one fairly flat, one that wouldn’t crumble and give way in a few minutes, one free of bird droppings. I stayed long enough to quiet myself like the lake.

Twice I turned when I heard footsteps. Twice I found it was only the huge brown brittle leaves of the oak tree clapping overhead. It began like that. A return to the stump each day.

Not once did I see another human along the shore, and never did I have to forgo my study, always I found the lake up for my visit. I scanned the sky for the two bald eagles that nested on the closest island. In all of December, I saw neither.

When the snow came, the lake transformed. In all my life, I had never seen this, only noticing it after it had happened. It took a month, every day of which I stopped and examined the changes at length. To take the time was an unsettling luxury at first. I was used to coming, going, quickly, on to the next thing. But the changes were so small that they took time. I stopped and sat and watched a little each day, longer when the sun shone, shorter when the wind came across the lake.
At first, I watched the lake resist the changes of winter and cold and snow. The flakes fell and disappeared into the lake. This, I liked. Great white flakes melted on my hands and on the water, as if the same. I was certain that no one had sat there and done that very thing.

The cold had its way a week into December. I arrived to see the water had turned thin and clear. So it began. One day it was lapping at the shore, the very next it was stilled. It was a tentative state. I could see through it, I could break the surface with the tap of my toe. I thought of my young boys and how they would soak their boots with a jump even as I told them not to.

But in a few days, maybe only two, the ice bore the weight of a single running shoe and its occupant. I found this day the most magical. I stepped upon its very edge and looked to my right, down to the bog that blurred the shore, then left up past the men’s favorite fishing holes. The ice was clear, the bottom of the lake framed. Glass, rocks, seaweed and sand at my feet, trapped. It was daring. I could walk on water, treading only so far out before returning to the safety of shore.

A heavy snow came on a night soon after, thickening the ice and turning it cloudy. It was snow that I had overlooked a million times. But when I stopped and sat and waited, the details presented themselves as I now knew they would. My eyes picked up thin streaks stretched across the lake, huge loop-de-loops, the warm spots, the undercurrents, the places ice fishermen would be wary of each season. I liked these most, the holdouts.

Finally in another week’s time, the snow feathered white and thick to every edge of the lake. No trace of water remained. It happened fast, even as I stood vigil. I arrived on a Wednesday morning to see that it had been done.

I waited for the details to come in the plain, endless white, but my eyes saw nothing. So I closed my eyes and listened until I saw.

Yes. The big clapping leaves of the oak had fallen. I turned on my stump to find their brown against the white at my feet. I imagined they’d taken their time falling, grabbing great handfuls of winter air with each curve to the ground. The final concession to winter’s arrival.

Kandace Chapple is a freelance writer and publisher of Grand Traverse Woman Magazine.

Where to go Snow Tubing in Northern Michigan