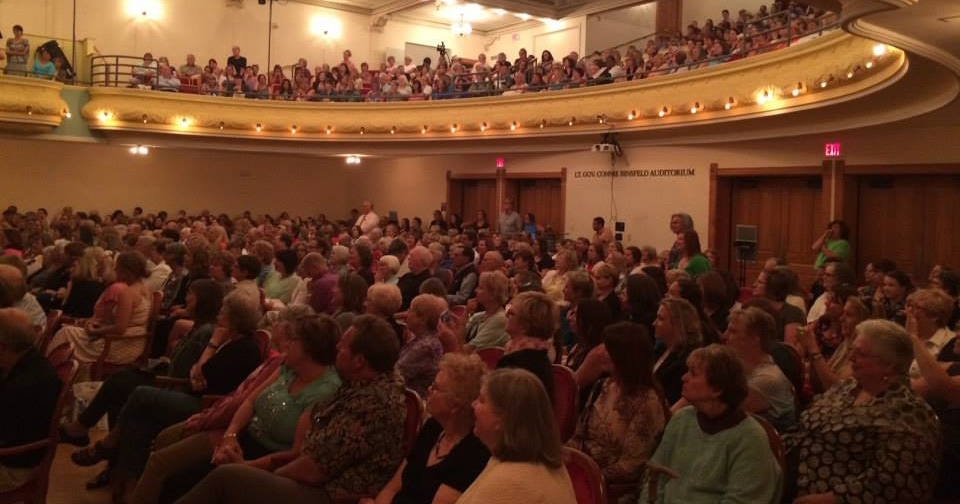 The National Writers Series in Traverse City has announced their line-up for 2015. Headlining the season is seven-time #1 best-selling author Harlan Coben. Four other major best-selling fiction authors complete a dramatic, humorous and thought-provoking lineup that packs a literary punch. Stay tuned for a sixth author announcement later this winter!

Having hosted more than 70 nationally recognized and critically acclaimed authors, the NWS is known nationwide among readers, publishers and editors as one of America’s premier author event forums. New York Times Magazine columnist and author Chuck Kloosterman said, “The National Writers Series is the best venue I’ve ever spoken at.” Mega best-selling author Gillian Flynn said, “It’s one of my favorites.” And Nathaniel Philbrick, Pulitzer Prize-winner and best-selling author of In the Heart of the Sea (which will be released as a Ron Howard-directed motion picture thriller this spring) said, “The NWS at Traverse City has already become a remarkable institution. Not only do the organizers attract big crowds and sell a lot of books, as an author you’ll have an immense amount of fun.”

Since it began in 2009, tens of thousands of readers from around the U.S. have attended NWS events. The acclaimed book festival’s sixth season features literary fiction, romance, page-turning thrillers, and historical fiction at its absolute best. It also features an exclusive offer to the NWS audience at one of the author’s events, and it is another author’s first stop on a major nationwide book tour.

The season kicks off with a bang — with international best-selling medical thriller writer Tess Gerritsen on January 20 — and a new way to buy tickets for the entire lineup. Ticket holders to the January 20 event will have a chance to purchase up to two tickets to each event in the National Writers Series Winter/Spring and Summer seasons in advance of the general public. Tickets for the new season will be available for sale at the box office before and after Gerritsen’s appearance to ticket holders that evening only.

Literary sensation Garth Stein will make a National Writers Series appearance on April 21. Stein’s The Art of Racing in the Rain spent more than three years on the New York Times best-seller list. His new book, A Sudden Light, is the work of a master storyteller at the height of his power.

Debbie Macomber is scheduled to appear on May 7. Macomber writes about love, romance and relationships. Her novels have spent over 750 weeks on the New York Times best-seller list and have been made into Hallmark movies as well as the popular Cedar Cove TV series.

Jeff Shaara, the critically acclaimed New York Times best-selling author of several historical fiction novels, will begin his national book tour in Traverse City and premiere his new novel, The Fateful Lightning, on June 2. This is the very first chance that any of Shaara’s millions of fans will get to see him in person this year on tour.

Harlan Coben’s last seven novels have all debuted at #1 on the New York Times best-seller list. This master of suspense will make a National Writers Series appearance on July 9, during the 2015 National Cherry Festival, for his new book The Stranger. His 2001 novel Tell No One was made into the hit movie of the same name.

Complete details about all of these authors and their National Writers Series events follow:

An Evening in Conversation with Tess Gerritsen

EXCLUSIVE OFFER TO EVENT TICKET HOLDERS: Ticket holders to “An Evening in Conversation with Tess Gerritsen” will have a chance to purchase tickets to all events in the National Writers Series Winter/Spring and Summer seasons in advance of the general public.

This previously announced event kicks off the National Writers Series Winter/Spring season. Ticket holders to “An Evening in Conversation with Tess Gerritsen” can purchase up to two tickets to each author appearance in the Winter/Spring and Summer seasons. It is an exclusive opportunity to purchase tickets for the new season in advance of the general public.

Suspense writing royalty Stephen King says, “Gerritsen is an automatic must-read in my house; what Anne Rice is to vampires, Gerritsen is to the tale of medical suspense. She is better than Palmer, better than Cook… yes, even better than Crichton. If you’ve never read Gerritsen, figure in the price of electricity when you buy your first novel by her ’cause baby, you are going to be up all night.”

An Evening in Conversation with Garth Stein

With guest host to be announced

Garth Stein is a best-selling author and Academy Award-winning filmmaker whose novel The Art of Racing in the Rain sold more than 4 million copies and spent more than three years on the New York Times best-seller list. He won an Academy Award in 1990 for his live action short film The Lunch Date.

Before turning to writing full time, Garth Stein was a documentary filmmaker, directing, editing, and/or producing several award-winning films, including The Last Party, starring Robert Downey, Jr., in 1993 as well as The Lunch Date.

Garth is cofounder of Seattle7Writers, a nonprofit organization dedicated to “energizing readers and writers and their communities by providing funding, programming, donations of free books to those in need, and generally inspiring enthusiasm for reading.”

Stein is the author of the blockbuster bestseller, The Art of Racing in the Rain, which spent more than three years on the New York Times best-seller list. His new novel, A Sudden Light, is spellbinding and atmospheric. Rich with unconventional characters, scenes of transcendent natural beauty, and unforgettable moments of emotional truth, A Sudden Light reflects Stein’s outsized capacity for empathy and keen understanding of human motivation. It is a triumphant work of a master storyteller at the height of his power.

An Evening in Conversation with Debbie Macomber

She spins “a good yarn”: Macomber’s novels have spent more than 750 weeks on the New York Times best-seller list and have been made into Hallmark Channel movies and a popular TV series. An avid knitter, Macomber owns a yarn store aptly named A Good Yarn Shop.

Macomber owns her own tea room, Victorian Rose Tea Room and a yarn store, A Good Yarn Shop, named after the shop featured in her popular Blossom Street novels. She and her husband, Wayne, serve on the Guideposts National Advisory Cabinet, and she is World Vision’s international spokesperson for their Knit for Kids charity initiative.

An Evening in Conversation with Jeff Shaara

The Fateful Lightning is the concluding novel of Shaara’s epic Civil War tetralogy, which tells the dramatic story of the final eight months of battle from multiple perspectives: the commanders in their tents making plans for total victory as well as the ordinary foot soldiers and cavalrymen who carried out their orders until the last alarm sounded.

An Evening in Conversation with Harlan Coben

Presented in partnership with the National Cherry Festival

With guest host to be announced

The #1 New York Times best-selling master of suspense will make a National Writers Series appearance during the 2015 National Cherry Festival for his new book The Stranger. A stand-alone thriller, The Stranger is his most shocking yet, proving that a well-placed lie can help build a wonderful life– and that a secret has the same explosive power to destroy it.

This visit by Harlan Coben has been two years in the making; Coben is one of the world’s most popular writers and is in massive demand with his audiences. But NWS and Coben’s publicity team have finally secured an evening with this critically acclaimed author.

Ticket Information for all Events

Tickets are on sale NOW for “An Evening in Conversation with Tess Gerritsen” on January 20, 2015.

Individuals attending the January 20 National Writers Series event with international best-selling thriller author Tess Gerritsen can purchase up to two tickets to each event in the 2015 Winter/Spring & Summer seasons that evening. This is an exclusive opportunity to purchase tickets before they go on sale to Friends of NWS or to the general public. This special offer will be honored that evening only — otherwise general on sale date rules apply.

Tickets go on sale to Friends of NWS at 10 am on Wednesday, January 21, 2015 (box office only). Friends’ memberships are available for purchase at the City Opera House box office or online at www.nationalwritersseries.org.

Tickets can be purchased at the City Opera House box office, by phone at 231-941-8082, and online at www.cityoperahouse.org.

Ticket Prices for all events (except Harlan Coben):

All events offer the choice of a seating-only ticket (premium reserved, reserved or general admission) or a “Whatta Book Deal!” package. “Whatta Book Deal!” pricing varies by event and includes a ticket and a pre-signed copy of the author’s book (the entire package is value priced to reflect a savings of 40% or more).

All NWS events this season will feature live musical performances from 6 to 7 pm during which time attendees can enjoy a complimentary dessert from Morsels and a cash bar reception as well as purchase books and NWS merchandise. The evenings will also include an audience Q&A and most events will include a post-event book signing.

ABOUT THE NATIONAL WRITERS SERIES

A Q&A with Rita Mae Brown in Traverse City

Having a Chat with Sophie Kinsella