Seth Bernard with Dan Rickabus and Mike Lynch in Leland 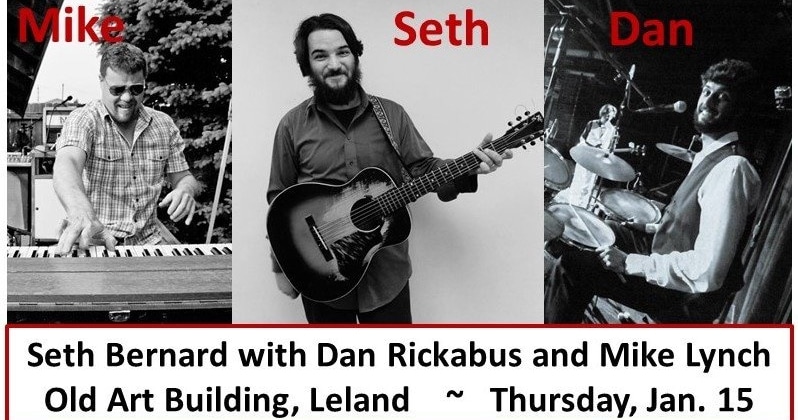 The Leelanau Community Cultural Center along with On Stage 4 Kids presents Seth Bernard, Dan Rickabus (The Crane Wives) and Mike Lynch (Steppin’ In It) on stage at the Old Art Building in Leland on January 15, 20154 at 7 pm. The trio will blend their assorted musical flairs into a unique combination of music, vocals and lyrics to warm your heart, amuse the soul, and open your eyes.

Seth Bernard, born and raised on a farm in Lake City, Michigan, is a musician & songwriter.  As a performer, Seth is equally at home playing his introspective, socially-charged ballads as he is joining a 10 piece electric ensemble on lead vocals, bass, steel or electric guitar. He can shred with the best of them, but also bring it home with stylish, mellow fingerpicking. His singing is intimate and raw. Seth’s musical talents are nearly rivaled by his community organization. He spearheaded the Earthworks Music Collective — an assembly of musicians, songwriters, composers and vocalists who believe that the intrinsic and historical power of music raises both community and self-awareness and serves to facilitate and encourage original music in the state of Michigan and beyond — an idea that has grown to a formidable record label in Michigan’s traditional folk music circles.

Dan Rickabus is a drummer, percussionist, multi-instrumentalist, vocalist, co-songwriter, co-producer and collaborator in The Crane Wives and Airborne or Aquatic? as well as with local luminaries Seth Bernard, Max Lockwood, Joey Schultz, DarlenYa, Milo Birch, and many more. His love of community, intentional living, nature and the cosmos can be heard resonating in the sounds of his original tunes, which are sometimes performed solo on ukulele, other times explored with a nine-piece tribal-space-folk ensemble of family members and friends.

Mike Lynch, a former school administrator, has played in over 100 shows at schools from elementary to college for over 10 years. His background in blues, folk, Americana, Irish and rock music has led to gigs with Kid Rock and Bob Seger as well as the CMT Crossroads television special – Willie Nelson’s 80th birthday party.  He is the keyboardist and accordion player in the award winning Michigan band “Steppin’ In It”.