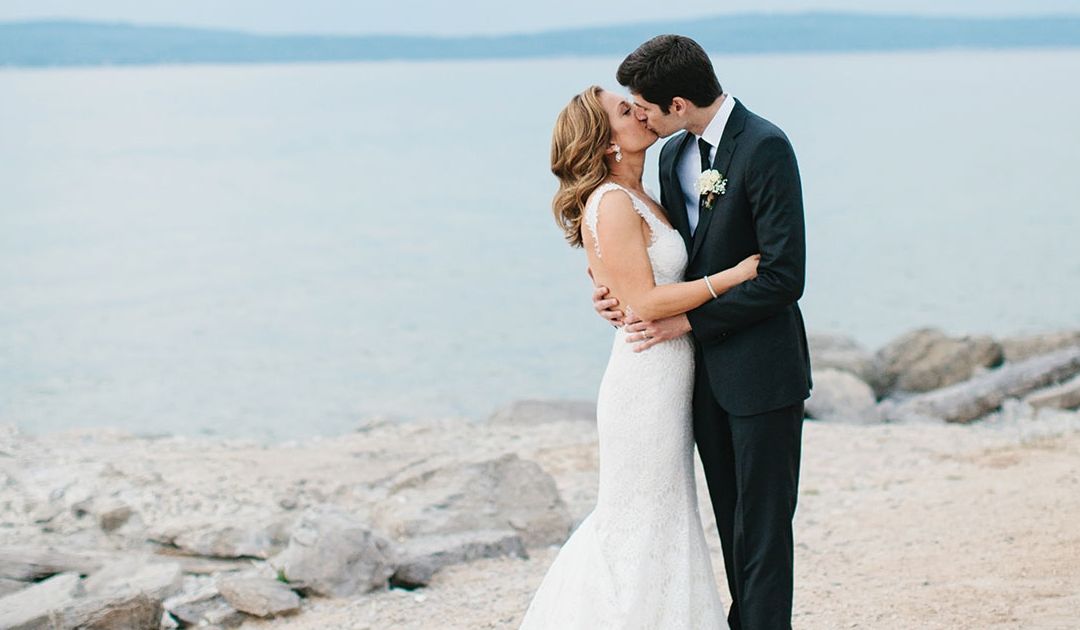 Last June, Charlevoix photographer Michael Murphy IV had the honor of shooting the wedding of Good Morning America meteorologist Ginger Zee and NYC television personality Ben Aaron at The Inn at Bay Harbor near Petoskey. We checked in with Mike to see how it felt to see his photos in People magazine and on Good Morning America and about what it takes to be a wedding photographer.

So… this is the first celebrity wedding you have ever shot. Were you nervous?

The day before I was really nervous. But on the day of I was Zen. I knew I had to make sure the photos were great, so I scouted out locations a few days before. One of the best shots, the one of them standing in front of some bushes with her veil flowing in the wind—that’s a spot that my fiancée, Debbie Early, and I found a few days before in front of a house right next to the inn. I woke up the morning of the wedding and thought, “This is just like any other wedding—I’m prepared. Let’s do this.”

What was the most memorable part of the day for you?

It was the private ceremony that they had in Ginger’s room before the actual ceremony. It was just Ginger and Ben and my assistant, Chase O’Black and me. That felt very exclusive and intimate. The photos from it are great.

What was your favorite shot of the day?

It was actually one of the photos that People magazine used as their exclusive the next day. It’s Ginger and Ben walking down the beach holding hands and laughing. He has no problem making her laugh. It was just that candid moment of two people laughing and carefree. Really being themselves. That was the best shot of the day for me.

What kind of equipment did it take to get quality like that?

I shoot with Cannon 5D Mark IIIs—a camera which is the newest-best in the wedding industry. I shoot with two of them so that I can have a long lens on one camera and a wide lens on the other. Chase was shooting, too, so we were getting separate angles and able to cover more of the wedding. When we started out, for instance, I was with Ginger while she was getting ready and he was with Ben when he was getting ready. That is one of the important reasons to have two shooters.

I like to think of my work as honest and candid.  The images that really move me are when I’m able to capture beautiful and honest moments as they happen.  Shooting in a candid style helps me achieve that honest look that I strive for. I also feel that it is important to get a variety of wide, landscape shots that showcase Northern Michigan and intimate up-close shots.

How much Photoshop treatment do you do to your photos?

I try not to change the image too much.  My goal is to approach editing with honesty and try to make the image look as much like the real life setting as possible.  That involves tweaking the temperature, color, contrast, and a few other variables.  I never do crazy editing treatments, because when you know that it’s fake, it can take away from the honest moment that is being captured.

So how did the whole People magazine scenario go down?

The day of the wedding Ginger and Ben told me that People was going to have the exclusive break on the images the next day, so I would need to send them images that night. I also knew that Good Morning America was going to want to have images on the next day, so I stayed up until 3 a.m. editing photos. Debbie and I watched it with friends and sure enough, they showed my shots at the end of the show. In the afternoon we decided to take naps and just after we laid down Debbie looked at her phone and said, “Oh my gosh, People just broke the story with one of your photos.” Later USA Today picked them up, also a London newspaper and several New York City publications.

All of which brings us to your happily-ever-after. You are getting married this summer. Tell us about your engagement shoot.

I proposed at Pictured Rocks (National Lakeshore on Lake Superior). We went for a hike after breakfast and we came to this shelf that is right out over the water—it was beautiful and I knew it was the spot. She knew I wanted to take pictures of us in cool spots, so I’d brought along a tripod and shutter release for time lapse. I sent her down to the ledge and then I set up the tripod and joined her. I said, “Okay look this way.” Then I got down on my knee.

So who is going to shoot your wedding?

Brad and Jen of Q Avenue Photo in Nashville, Tennessee. Brad is from Northern Michigan and is an old friend of Debbie’s. We’ve all gotten to be friends now. They are really fantastic shooters.