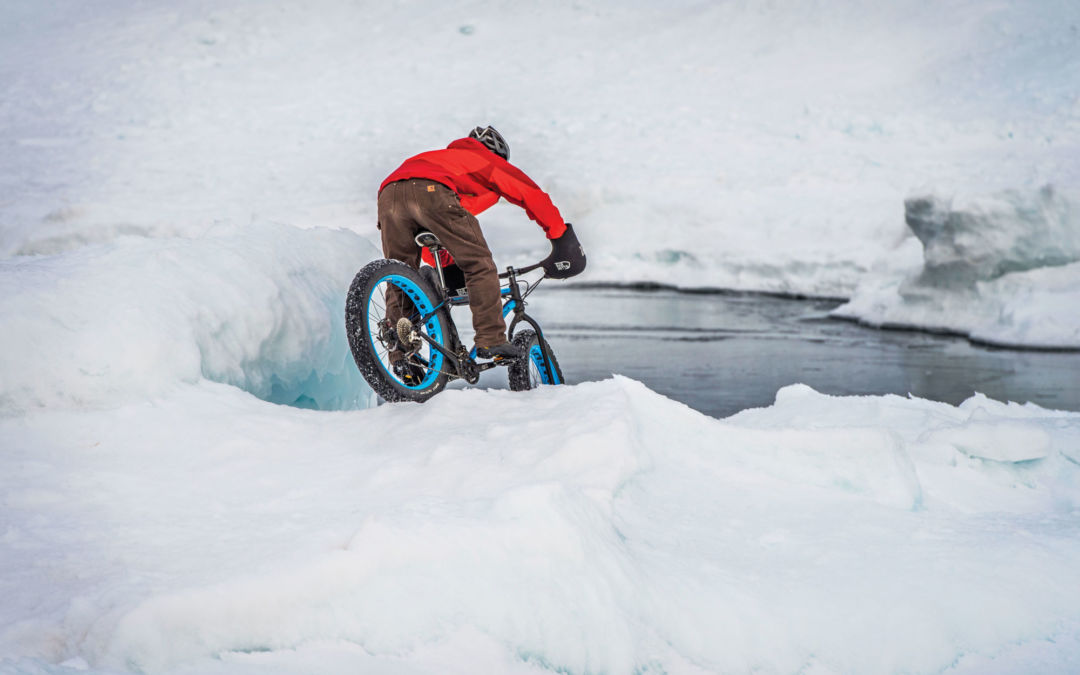 These epic photos and feature article were published in the January 2015 issue of Traverse, Northern Michigan’s Magazine.

I live in the Central Upper Peninsula on a dirt road with a Finnish name. I earn my living enticing travelers to the deep woods and proud waters of this sparsely inhabited place. It’s a fantastic place to visit, but let’s cut the crap, most of the time it’s a cold, hard land, and if you want to survive here, at some point you’ll need to acquire a taste for the blue-gray porridge of winter. Served cold daily, for six months of the year.

Don’t get me wrong, I love winter, but you have to find things to do other than stoke the stove and swim through six packs. Euchre doesn’t count as exercise. So I move; move with the aid of alpine skis, telemark skis, Nordic skis, skate skis and snowshoes. Our epic winters have pushed me to adopt sports like ice climbing and snowmobiling in order to stay in a constant falling-forward perpetual motion mental game to shorten the season and lengthen my sanity. 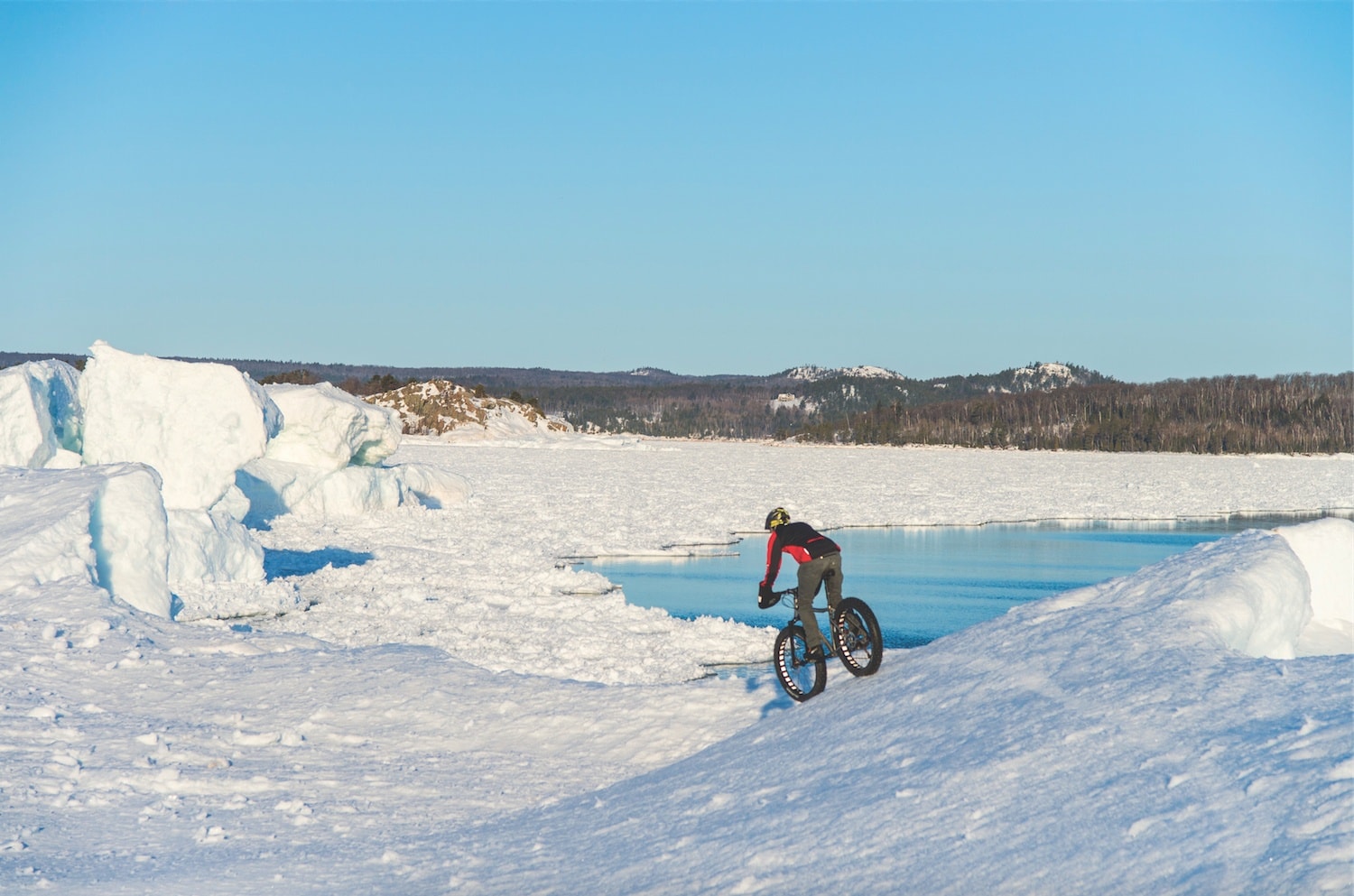 A few years ago fat bikes began blossoming along the snowy sidewalks of my nearest city, Marquette. Like most, my reaction was a guffaw, a double take and a shake of the head. Nope. Not for me, I’m not falling for this gimmicky balloon tire, bounce-house bicycle. I’ll stick to my skis.

But then winter wore on. The woodpile dwindled, and the wax shavings under the ski bench piled up like pow. Finally, one day after ticking off what seemed like the gazillionth Nordic loop, I got an invitation from some cycling friends to try out a fat bike. I set pride and image aside, threw my leg over one of these goon bikes and monster-trucked the bejeezus out of a couple miles of snowshoe trail. My friends were right: once you go fat, you don’t go back.

Within a few weeks, unbeknownst to my wife (not recommended) I had purchased not just a fat bike, but the fattest of fat bikes available at the time, a Surly Moonlander. I could air down my 5-inch tires to 3 psi and nearly ride up trees. This thing was unstoppable, it seemed. I spent the following weeks spinning around, riding anything I could in my neighborhood on the edge of the Hiawatha National Forest. Honestly, it’s sort of a blur, a manic whirlwind spiral of endorphin addiction pocked with hazy memories of gelatinous lung cookies, frostbit toes and cones of light spearing into lake-effect snowstorms.

And laughing, always laughing. The fat bike, like no other piece of gear I own, has the ability to conjure up laughter. I’m not talking about the chuckle and wave from the neighbor with his Don’t Tread on Me flag as I grind down our snowy road, but I mean MY laughter. As in joy, as in playing like a freaking kid again and just getting unapologetically silly in the snow. I am passionate about Nordic skiing, but I don’t recall ever giggling on skinny skis. 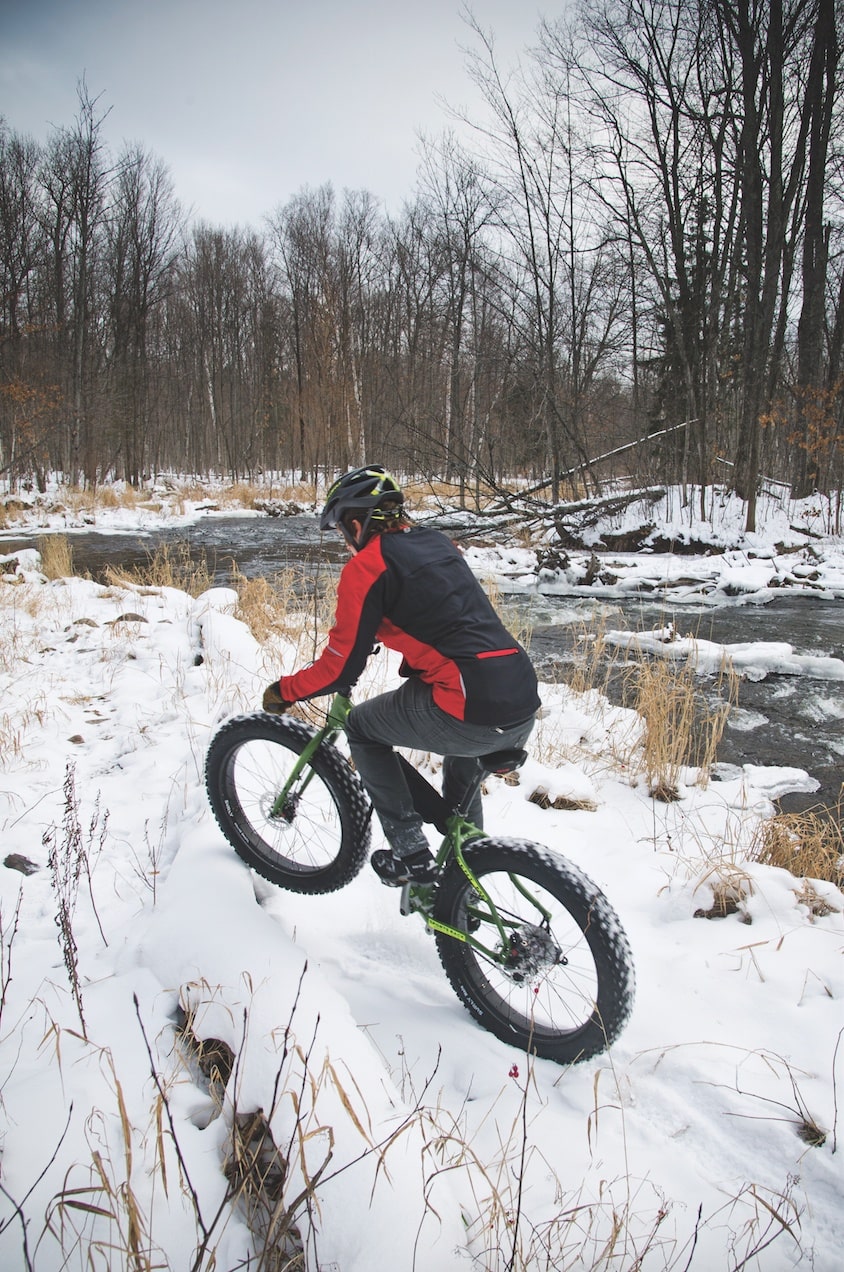 While that first season of snow biking is a bit hazy, one day stands out. It was in the spring. A morning, bell clear and still. Every branch and bramble hushed with hoar frost. The dawn sky as startlingly blue as the eyes of my neighbor’s sled dogs. I could hear them barking for their breakfast as I turned east out of the driveway and got up on the pedals to climb a short hill. I’d been poaching the local mushing trails all season. The relatively narrow, relatively packed trails were a joy to ride, and that’s where I was headed today, except that I noticed a set of canine tracks, probably coyote, caroming off the trail and overland through the open hardwoods.

On a whim, I decided to follow them. There was still about two to three feet of snow in the woods, but the daily freeze-thaw-freeze-thaw that stirs the maples’ sap had rendered the entire national forest a crusty skate park. If I put a foot down it would crunch through, but as long as I was on the bike I was a winged beast swooping through the forest on a magic carpet.

Free from the trail I quickly became lost—but didn’t care. I kicked up the gears and stomped on the pedals, popping over crust covered logs, throwing down wheelies here and moto drifting there. I could go anywhere I wanted faster than anything in the woods. The ride was nearly silent, and my tires barely left a track on the hard snow. I was the ultimate predator, a white wolf in black spandex, but as it turns out, only capable of harming myself.

No one would believe this. I had to document this. So I set up my phone on a stump, hit record and then tried to ride a line that I probably couldn’t even ski, a short, steep kettle with some small terrain features. Bad move. Front wheel through the crust, skinny guy over the handlebars, flailing through the air, landing on his ear. Full scorpion. Ringing. Stinging. Everything still works? Yes, but some blood, and where the heck am I? This bike is wrecked and I’m a loooong way from home. Chuckle.

Dang, I wish I had my skis for the trip home. 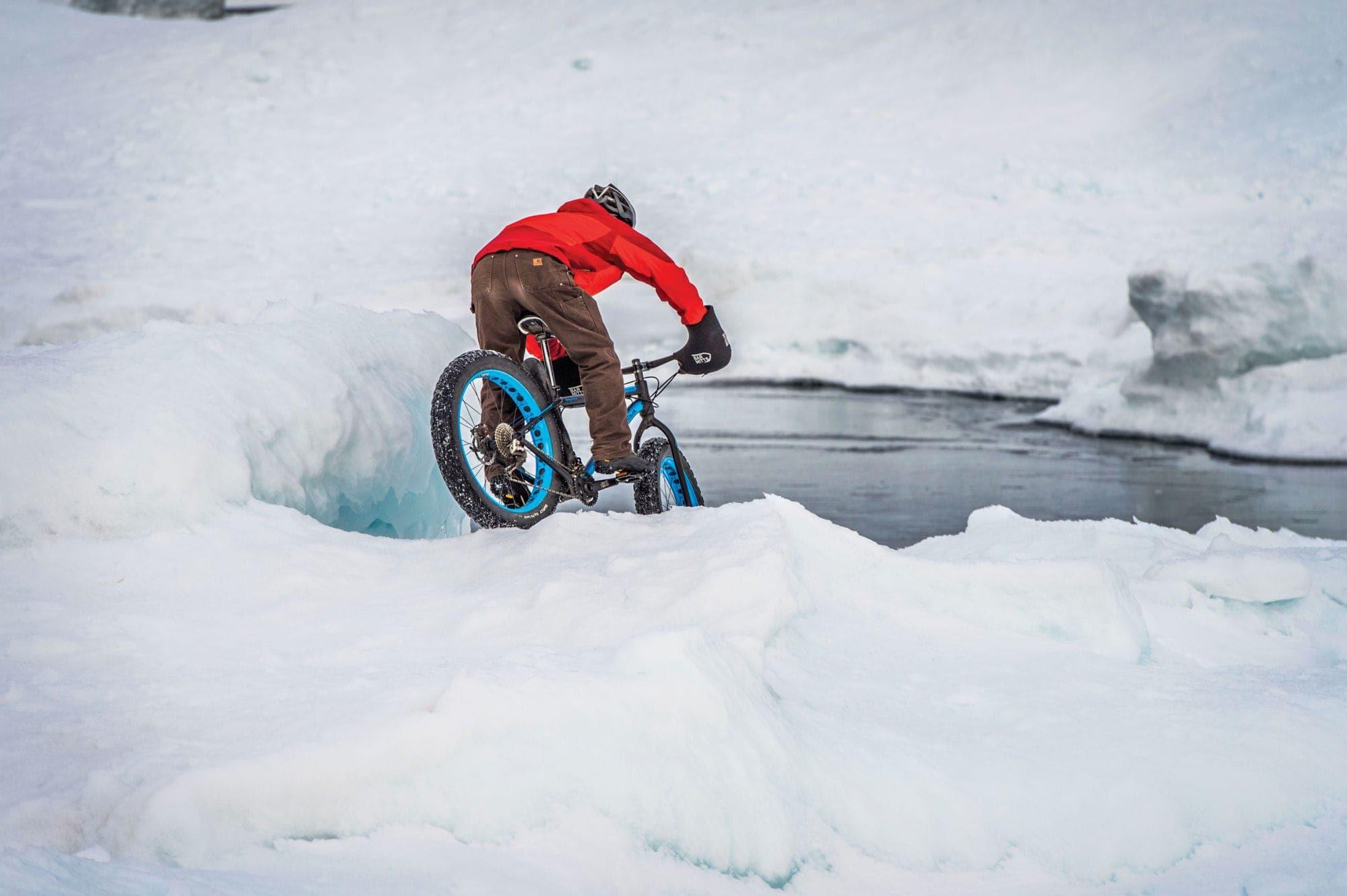 Mike Brunet and the Birth of the Snow Bike Route

Growing up in Marquette in the 1980s and 1990s, Mike Brunet had two constants in his life: bicycles and snow. As a boy, he rigged a snowplow on his bike that could be deployed with a converted brake lever to plow sidewalks. Now in his early 40s, the husband, father of two and lifelong bike geek is a board member of the Noquemanon Trails Network, where he led the development of Marquette’s Snow Bike Route—the SBR in local parlance—a trend-setting winter singletrack trail for fat bikes. 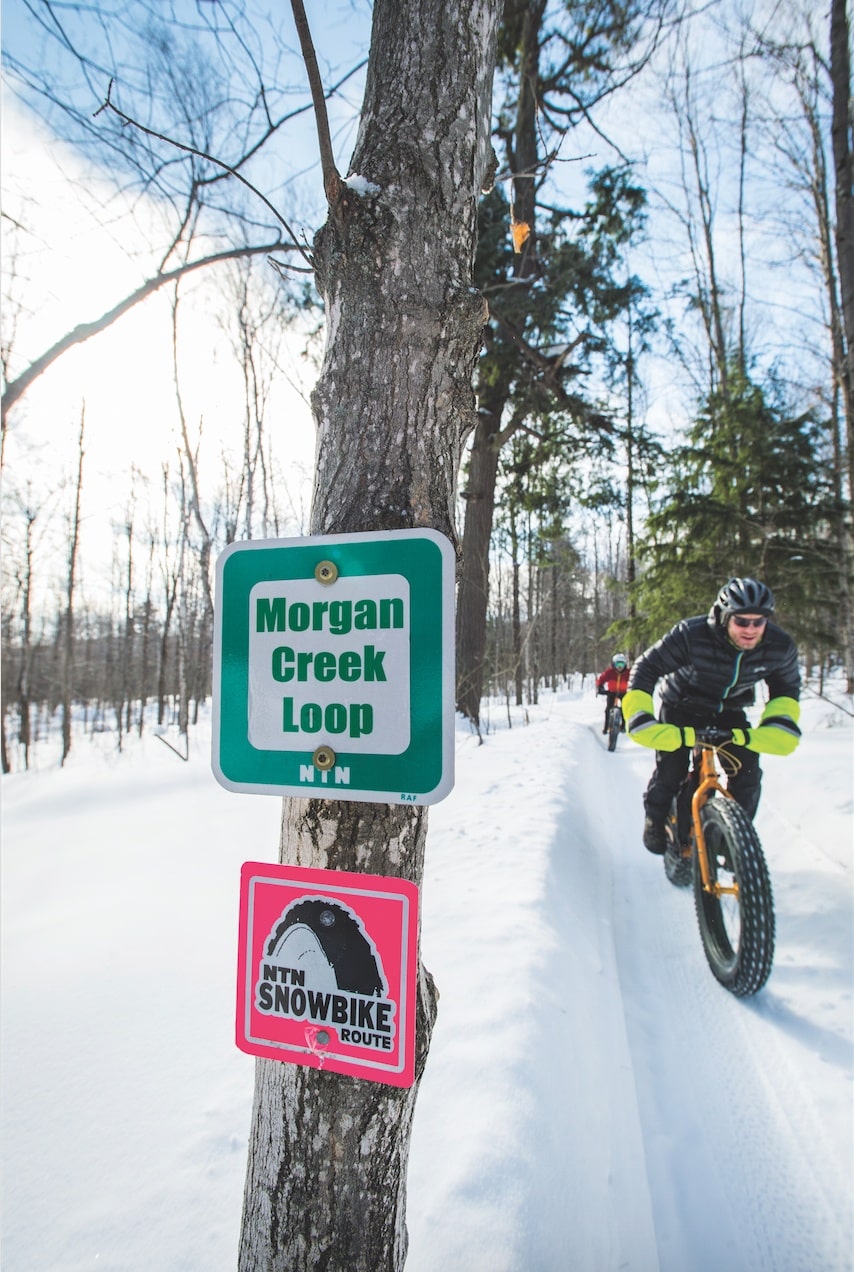 Why bikes? Why snow?
We still get asked why we want to ride our bikes in the middle of winter. But we do, we have to. We’re bikers, basically, there were a few of us then, a lot more now, but it’s who we are, and it’s what we have to do. You live in the U.P. and you’re into racing bikes, how do you keep your fitness up in the long off-season? Or nowadays, as the kids say, how do you keep your stoke up all through the winter?

Just a few years ago, snow riding was all on regular mountain bikes, right? When did fat bikes come into play?
There’s a big gap here between the winter free-riding and the fat bike trail. As a mountain biker rolling around you’d see these fat bikes, and it’s like, man those things are weird looking. Boy, I kind of want one. I built up a fat bike frame—in the early days you had to build your own—and started riding snowmobile trails, cross-country ski trails, poaching downhill runs at the ski hill, dodging groomers at night. Wherever we could make it happen.

What about the grooming evolution, tell us about that.
In 2011 I bought a snowmobile for powder riding and accessing backcountry skiing. I also bought a roller, like a yard roller for rolling your lawn. We filled it with beet juice for weight, because beet juice doesn’t freeze, and modified it to try and pack a trail with. I immediately crashed the snowmobile down a steep gully. It was a learning experience for sure. Then someone, I have no idea why, stole the roller. My friend Dave Ollila donated a bunch of prototype Marquette Backcountry Skis that we bolted to a metal frame with some weight. It got us through the rest of the season, but we had to play the weather right. It was really a prototype year.

When did the trail grooming tech come together?
Well, we’re still figuring things out, but 2012 was when Noquemanon Trails Network employee Matt Belic and I began serious development of a groomer. We welded and cut, welded and cut, trial and error over and over until we got a design that we’re fairly happy with. It’s a cross between a Nordic ski trail drag and a snowmobile trail groomer with cutters that churn and mix the snow, then feeds it into a compression pan that leaves it packed with a corduroy surface about 27 inches wide. 2013 was our best year ever. Marquette almost gets too much snow, so we also added a pull-behind plow to throw snow off the groomed trail, rather than repack it.

And the result is the SBR.
Right, we call it the Snow Bike Route, or SBR. It’s about 12 to 15 miles of snow singletrack with lots of ups and downs, some flowy bermed sections and some fast descents.

What’s the future for snow biking in Marquette?
The SBR is great and we’re proud of it, but the scene here is much more. There’s the Lake Superior shoreline, all the snowshoe trails, everything that’s been stomped in already by this incredibly active community. Up the road in Ishpeming there’s another groomed trail. It’s just a great place to ride. All these trails interlaced all over town, you can be riding a 27-inch wide groomed run on the SBR and see a perfectly good snowshoe trail spurring off, follow it and find yourself back on the SBR or down to Lake Superior on a plowed bike path to the beach, and then get up onto a big slab of shore ice. It’s dynamic, and it’s endless. The winter riding opportunities are almost equal to the summer experience in the number of miles, the diversity of terrain and the fun. It’s about fun really. 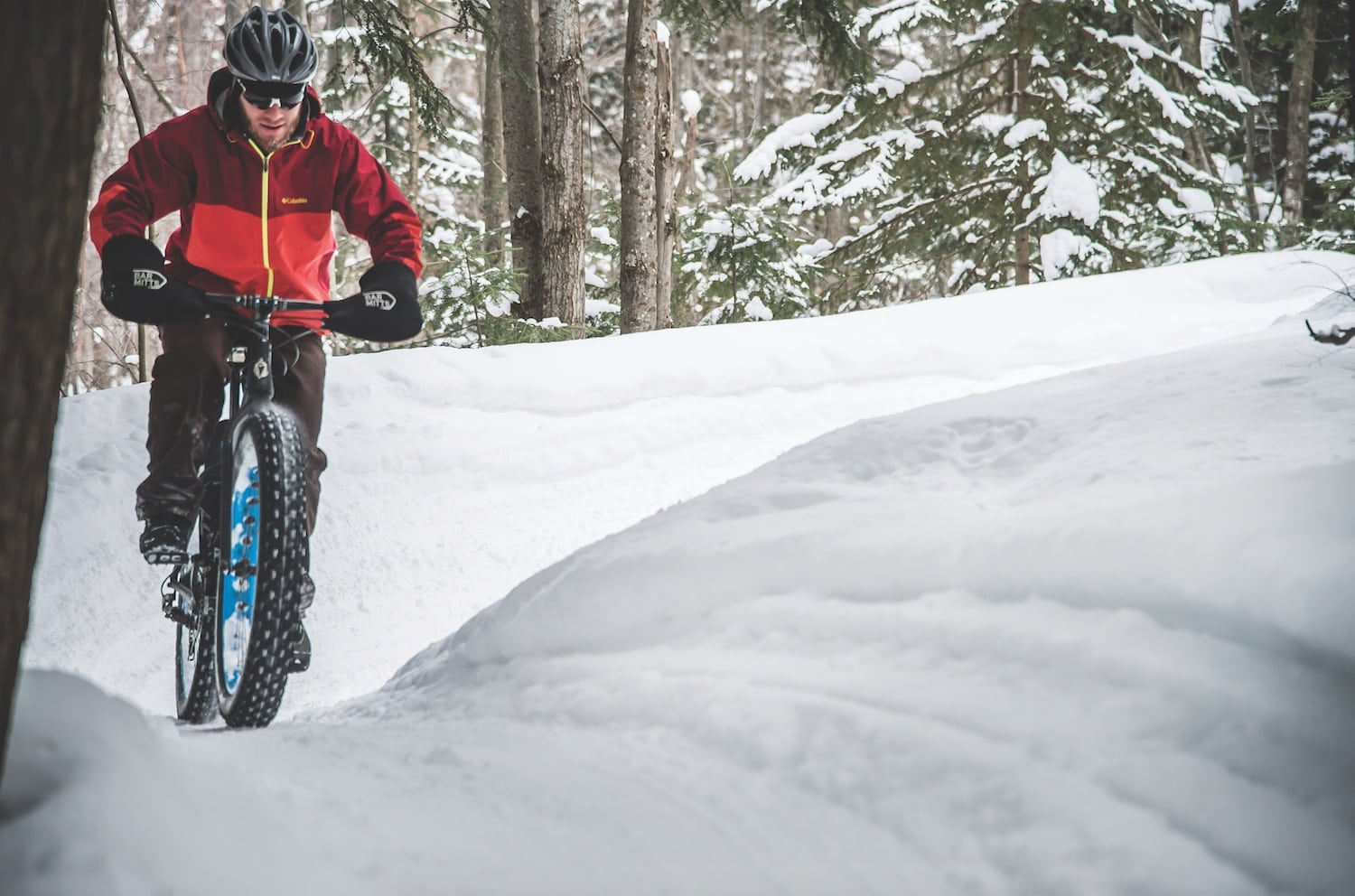 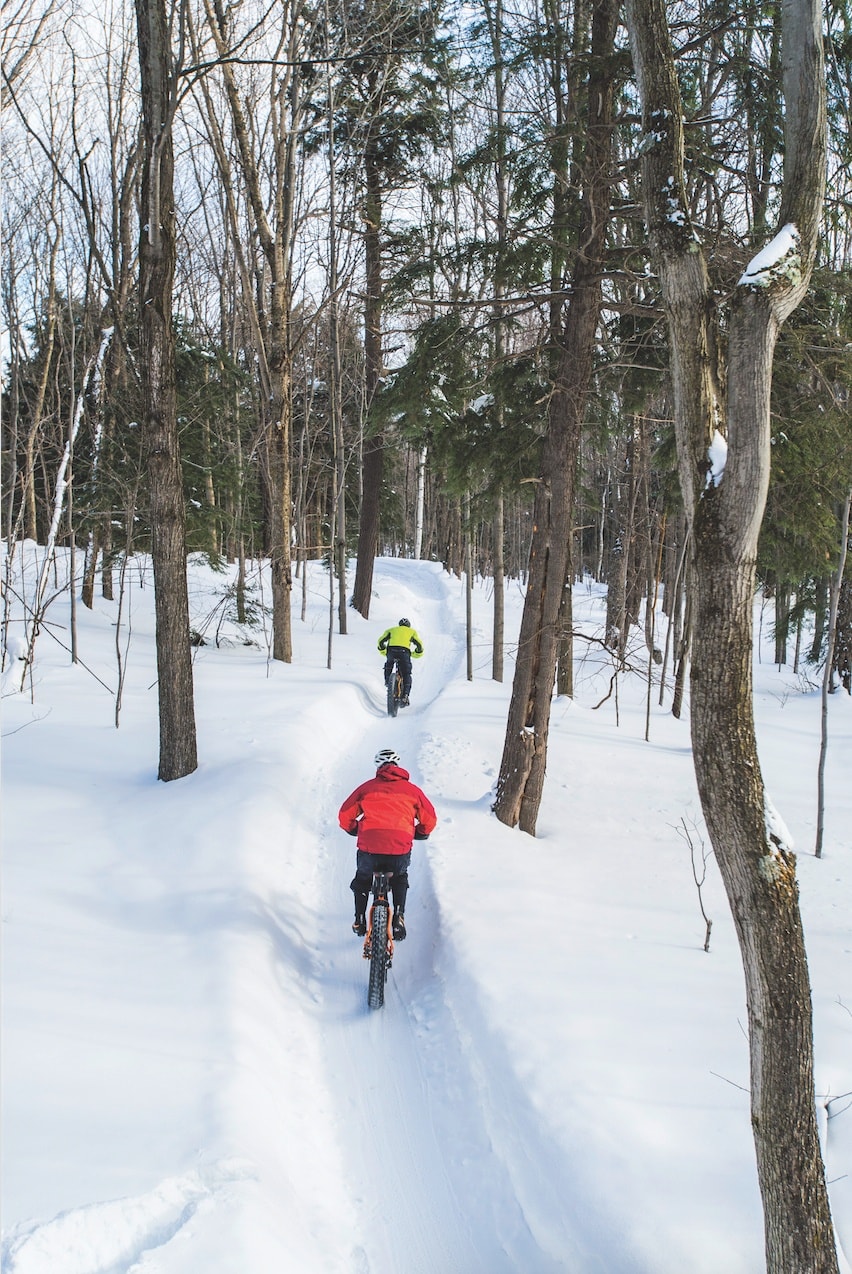 Watch This: Cold Rolled, the Film

In February 2013 Aaron Peterson pushed record on a video camera for the first time. The subject was winter fat biking and the new Snow Bike Route in Marquette. The project eventually spiraled into a 20-minute action documentary called Cold Rolled. The film, sponsored by Salsa Cycles and Travel Marquette, has greatly exceeded expectations, becoming a rallying point for the industry and trail clubs globally while landing Marquette a cover story in the Pure Michigan winter travel guide and carrying the budding filmmaker to Telluride, Colorado, where the film was shown at the Mountain film festival.