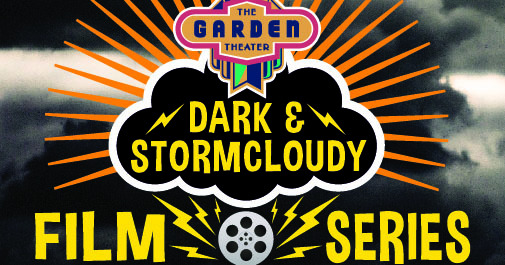 FRANKFORT, MI (January 14, 2015) – Stormcloud Brewing Company is proud to partner with the historic Garden Theater in downtown Frankfort for the 2nd annual Dark & Stormcloudy Film Series. The series pairs award-winning foreign films with a small batch, dark beer hand-crafted specifically for the movie selection by Stormcloud Brewing Company.
This year’s Dark & Stormcloudy Film Series begins in January with the first film and beer, then continues in February and March with a second and third film and beer pairing.
Brian Confer, Stormcloud Co-Owner and Brewmaster, says he enjoys the event because of the variety of beers produced for the series. “It’s fun because it gives us a chance to brew darker beers that we don’t normally have on tap during summer. And this year, each beer correlates with the film’s country of origin.” According to Confer, each beer selection will be tapped and available in Stormcloud’s pub on the day of the film’s first showing. Each beer is expected to remain on tap at Stormcloud for several weeks.
Film and beer titles and descriptions are outlined below. Each film will be shown in the recently renovated Garden Theater, next door to Stormcloud Brewing Company in downtown Frankfort. Please note, beer will not be served inside the Garden Theater. Admission to each film is $7 per person. Plus, each movie ticket purchaser receives a $5 Stormcloud token. Movie tickets can be purchased in advance, the day of the show at Stormcloud Brewing Company or at the Garden’s ticket window prior to the start of the film.
January’s Beer: Dark & Stormcloudy Ale – A big, deep Russian Imperial Stout.
January’s Film: How I Ended This Summer
Country of Origin: Russia
Summary: Set against the spectacular, otherworldly landscape of the windswept Arctic Circle, writer/director Alexei Popogrebsky’s multi-award-winning psychological drama, How I Ended This Summer, is an immersive and compelling morality tale of isolation and survival against the elements.
Pavel, a young graduate, is posted to a remote meteorological station over the summer months. His gruff, non-communicative co-worker Sergei takes pride in the repetitive work and is rattled by Pavel’s youthful carelessness and complacency, but the two go about their shared day-to-day lives, albeit with a heavy dose of mutual distrust. But when Pavel receives a gravely urgent radio message that, out of panic, fear and intimidation he fails to pass on, he inadvertently triggers a series of events that spin inexorably out of control.
Filmed entirely on location in the easternmost tip of Russia, this absorbing tale features exceptional performances and unforgettable cinematography.
One of the most distinctive and heralded films to emerge from Europe in recent years, How I Ended This Summer was the winner of the 2010 Berlin International Film Festival’s Silver Bear for Best Actor (shared by the two leads), plus the Silver Bear for Best Artistic Achievement. Amongst a slew of other awards, most recently it was named Best Film of the 2010 BFI London Film Festival.
January Showtimes:
Thursday, January 22 at 7:30pm
Sunday, January 25 at 2pm
Thursday, January 29 at 7:30pm
Official Movie Website: https://www.howiendedthissummer.com.au/
February’s Beer: Updraft – A rich, caramelly Scottish Strong Ale
February’s Film: Sunshine on Leith
Country of Origin: Scotland
Summary: Home is where the heart is for best friends Davy and Ally. Returning to their lifelong residence of Leith, in Edinburgh, the lads kindle romances old and new: Ally plans to propose to Davy’s sister Liz, while Davy falls head-over-heels in love with Yvonne. Meanwhile, Davy’s parents Rab and Jean are busy planning their 25th wedding anniversary. Everything’s going swimmingly, until a revelation from Rab’s past threatens to tear the family and all three couples apart.   The second feature from actor-turned-director Dexter Fletcher, Sunshine on Leith is a jubilant, heartfelt musical about the power of home, hearth, family and love. Adapted from the acclaimed stage musical by Stephen Greenhorn it features the euphoric music of The Proclaimers. Nominated for Best Feature Film, Best Directing, Best Actor, and Best Actress in the 2014 BAFTA Awards.
February Showtimes:
Thursday, February 12 at 7:30pm
Sunday, February 15 at 2pm
Thursday, February 19 at 7:30pm
IMDB Movie Website: https://www.imdb.com/title/tt2481198/
March’s Beer: Saison du Stormcloud – a Saison for the dark months. A deceptively dark Saison Noir.
March’s Film: The Broken Circle Breakdown
Country of Origin: Belgium
Summary: Elise and Didier fall in love at first sight. She has her own tattoo shop and he plays the banjo in a bluegrass band. They bond over their shared enthusiasm for American music and culture, and dive headfirst into a sweeping romance that plays out on and off stage — but when an unexpected tragedy hits their new family, everything they know and love is tested. An intensely moving portrait of a relationship from beginning to end, propelled by a soundtrack of foot-stomping bluegrass, The Broken Circle Breakdown is a romantic melodrama of the highest order. Oscar-nominated in 2014 for Best Foreign Language Film of the Year.
March Showtimes:
Thursday, March 12 at 7:30pm
Sunday, March 15 at 2pm
Thursday, March 19 at 7:30pm
Official Movie Website: https://tribecafilm.com/tribecafilm/filmguide/brokencircle
Stormcloud Brewing Company opened in June 2013 just two blocks from Lake Michigan in the lakeside town of Frankfort, Michigan. A small brewery specializing in Belgian-style brewing, Stormcloud offers approximately 20 beers on tap in addition to a full menu of flatbread pizzas, small plate appetizers, soups/salads, charcuterie plates, and specialty popcorn.
The Garden Theater, originally built in 1923, reopened in 2009 following an extensive renovation. As the result of countless community-driven efforts and valuable donations, countless updates have been made to the theater including a digital projector, upgraded Dolby digital sound, the installation of new seats, a new heating and cooling system, a hearing loop system including T-coil technology, art deco tile restoration, and numerous behind-the-wall upgrades. The Garden Theater shows first-run Hollywood, independent, and foreign films.
Stormcloud Brewing Company
Belgian Inspired, Michigan Made
stormcloudbrewing.com