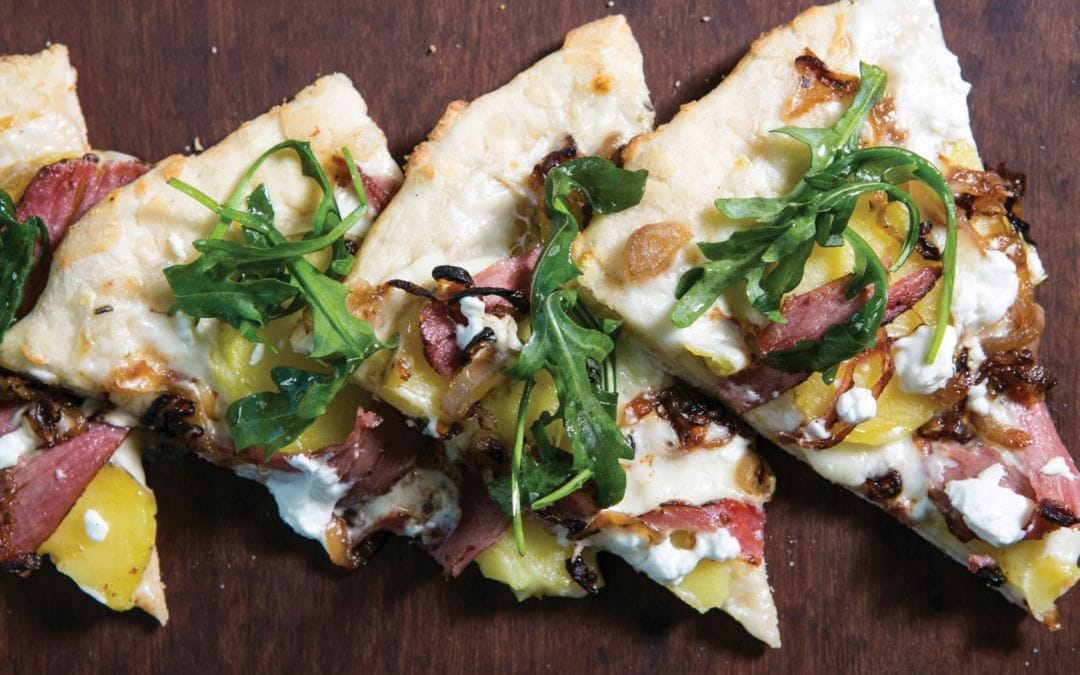 At last count, 20 microbreweries were making and serving craft beer between Ludington and Mackinac Island. Twenty. And all but about two opened in the past decade. There’s plenty of good reason to enjoy all that brew in the intended liquid state, but we asked chef Michael Peterson, of Siren Hall, to expand our tasting possibilities into the realm of solids. Would he honor the burgeoning industry by showing how to deploy microbrews to cook delicious, hearty, soul-warming foods that steel us against January chill? Peterson said he would be happy to oblige and invited us out to watch.

The chosen day turned out to be, appropriately enough, full-metal winter. Temps were in the teens, and a blockbuster wind and whipping whiteout had closed federal highway 31 along East Grand Traverse Bay. At the corner of Peterson’s Siren Hall restaurant in Elk Rapids, the stop sign twisted frantically back and forth in the big blow.

But oddly enough, the sun also shone, and a bright but diffused light lent warmth and coziness to the restaurant interior. At 10:30 a.m., the sleek but comfortable space was empty save for Chef Peterson and a few cooks prepping. A quiet prevailed, the only sound an occasional clank of a pan or the clunk of a walk-in cooler door slamming shut or the rhythmic tick of a knife on a cutting board.

Peterson poured cups of coffee and settled into a booth to map out the recipes and the day’s plan. First he wanted to clarify a change he made. “I added one hard cider recipe,” he said. The idea is a nod to the expansion of cider-making in Northern Michigan, but also echoed something in Peterson’s own history, growing up as he did surrounded by orchards on Old Mission Peninsula. 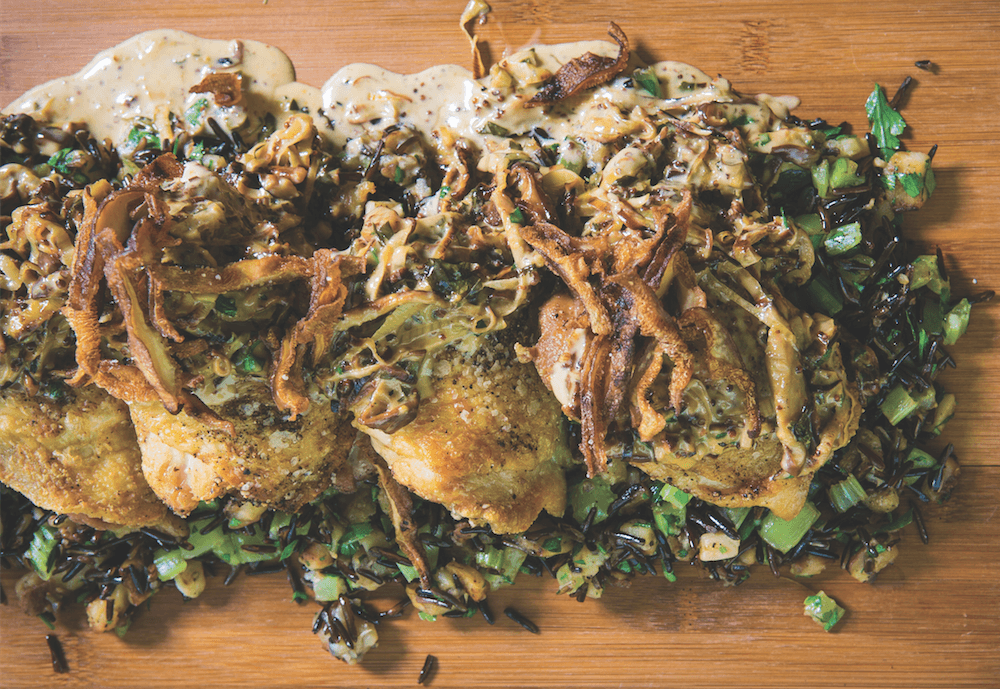 The recipes sounded delicious, certainly able to stand up to whatever winter was cooking up outside. But the dishes also revealed Peterson’s sense of flavor pairing, his inventive spirit and his renowned willingness to embrace the next food challenge. Those characteristics emerged in him early and have shaped his chef life.

Flash back to the summer of 1982. Michael Peterson was 12 years old, enjoying the boyhood life on Old Mission Peninsula. He swam. He rode his bike. He made spending money pulling cherry shaker tarps during harvest or packing berries next door at Buchan’s Blueberry Farm. He was living large in the country-boy manner of the Grand Traverse region. But then one weekend his mom asked him to help cook a Sunday morning breakfast. The meal involved potatoes. And his world changed.

“After that first time, I couldn’t wait to get out of bed on Sunday morning and cook breakfast,” Peterson says. Generally the meals continued to involve potatoes. He’d boil them the night prior and cut them Sunday morning. He favored caramelized onions to go with, but also tried to always think of new ways to cook them. 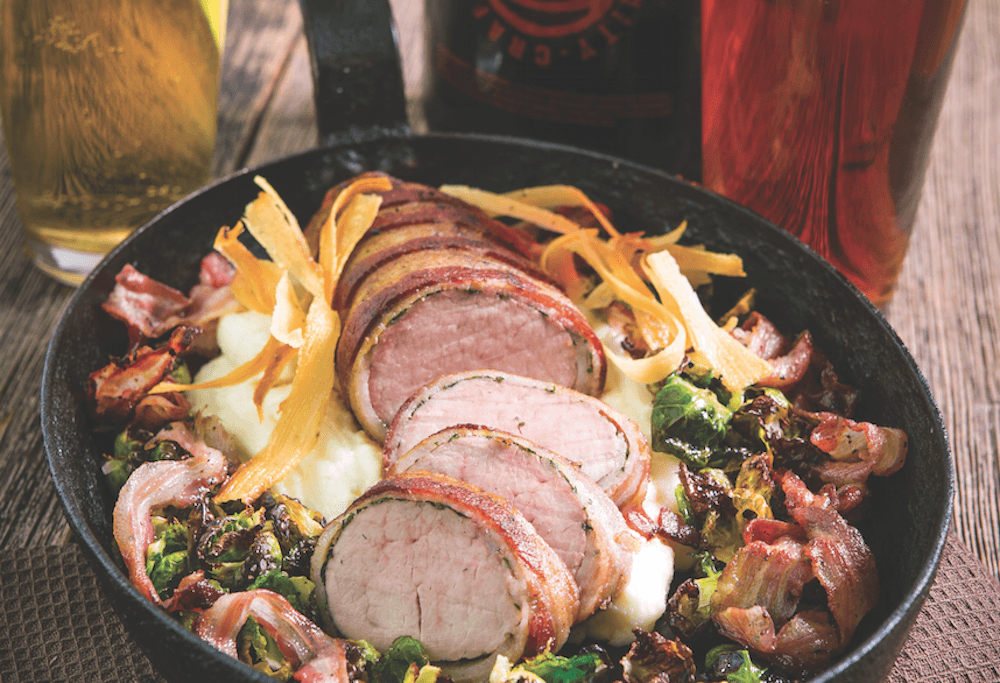 At 14, Peterson landed his first cook job, prepping at the former Bower’s Harbor Inn. As soon as he was old enough—a junior in high school—he signed up for the culinary program at the TBA Career Tech Center and stayed in until he graduated. “My instructor there, Karl Malin apparently saw something in me and said something to my parents,” Peterson says. The teacher had graduated from the Culinary Institute of America in New York and said Peterson should go to the acclaimed chef school right after 12th grade. “To get in you have to be tested by an alum, and he did that for me,” Peterson says.

By 20, Peterson had his chef papers and was ready to launch his career. He started at Philadelphia’s historic Black Bass Inn. “It was a really old inn, like George Washington slept there, and English soldiers used to drink in a basement bar,” he says.

Peterson quit after three years and returned to Traverse City looking for work. In a moment of kizmet, he was waiting in the car at Roma’s original restaurant while his girlfriend went in to pick up a pizza. She came out and said she just met the people who owned Alden’s Spencer Creek Landing, a small but respected restaurant on Torch Lake. “I said, ‘go back in and ask if they need some help.’ ” She did, he got a job, and within a year the owners asked him if he wanted to buy the restaurant. 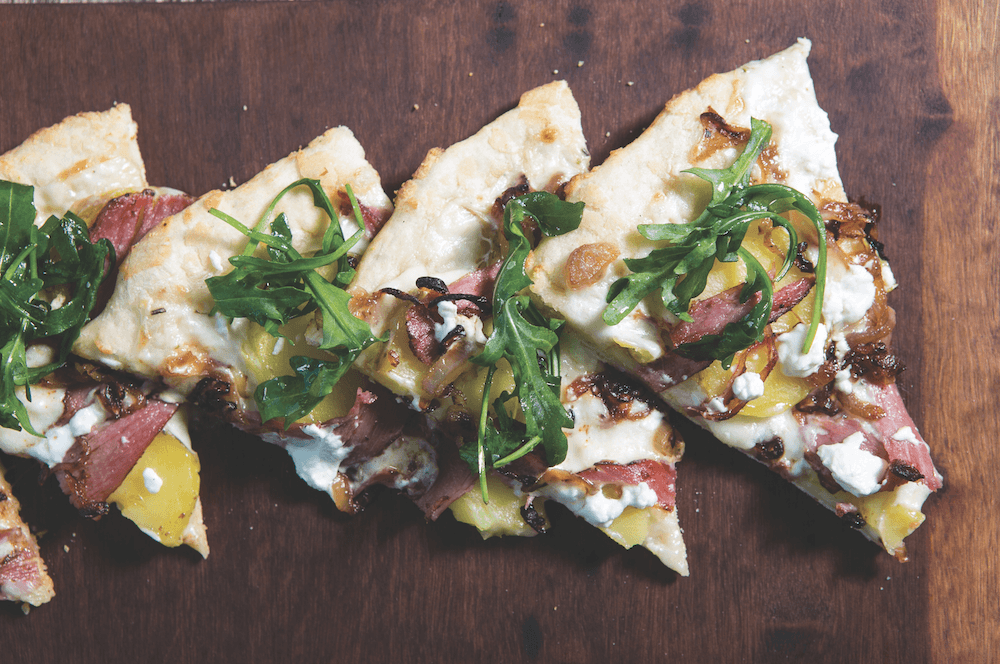 He was 24, suddenly owned his own restaurant along with his brother and his brother’s wife, and loved the life. “It was 7 a.m. till midnight, and I think the first five years I never took a day off during the season,” he says. Luckily there was time to re-charge in the winter, when the restaurant closed in the off-season.

One year early-on, he took three months and cooked in a restaurant in the heart of Paris, a gig found through connections at the Culinary Institute of America. “The owner gave me a room above the restaurant and fed me—I think 15 of us shared a bathroom—but otherwise I worked for free,” he says. “But it didn’t matter. I had just finished the season and had pockets of cash, and I was in Paris.” The restaurant owner was nearly a caricature of a French egomaniacal chef, but Peterson rolled with the demands and made friends with the other kitchen help.

Peterson’s influence on the Northern Michigan culinary scene evolved further when, in 2000, he and his partners closed Spencer Creek because of lease issues, and he opened Lulu’s in Bellaire with Sally Campbell. Lulu’s pushed the North’s bistro scene along with inventive, contemporary fare in Bellaire, but equally important for the North’s restaurant scene, it was the first space to meld a kind of vaguely industrial urban vibe with a northern soul, somehow keeping the look cohesive, authentic and inviting. 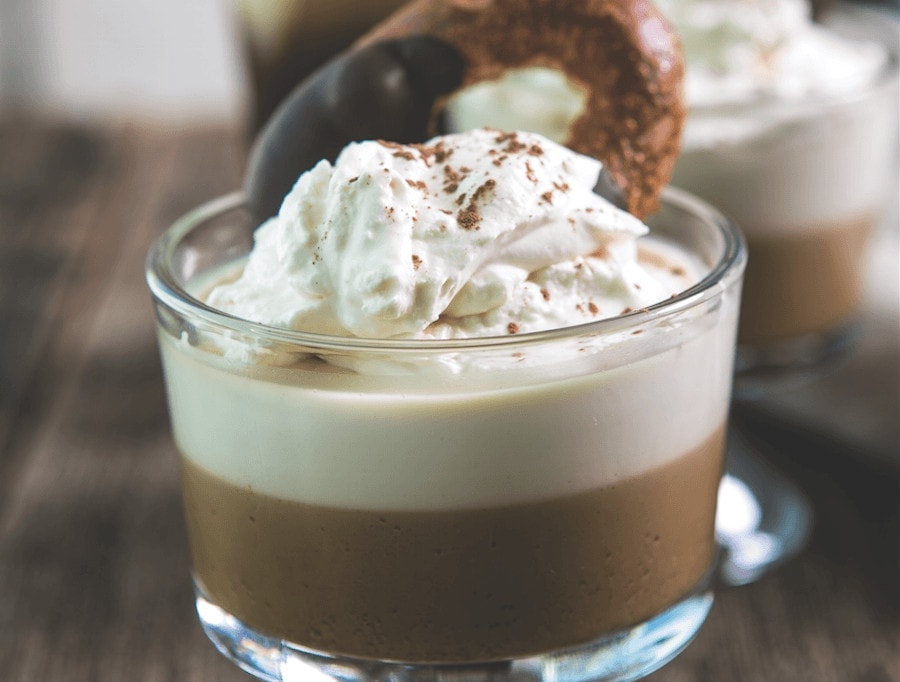 In 2006, Peterson learned of a 6,000-square-foot former gas station for sale in downtown Elk Rapids. He teamed with an investor and opened Siren Hall, a seafood-centric restaurant that, like Lulu’s, felt both urbane and authentically Up North. “It was a great space, and it had outdoor patio potential,” Peterson says. “I have a huge passion for cooking with seafood, and with Elk Rapids being on the water, it all made sense.” He installed a large kitchen, which now also supports his catering business, Antrim Catering, and the food truck Anchor Station.

As for the microbrew mission on that frigid day last year, Peterson said what he likes about cooking with beer is “there’s so much body, richness and depth in microbrews that they can be used in so many ways. With pork we just brined it in the beer. With the panna cotta, we took the chocolate wheat porter and reduced it down. It’s about learning how to balance the microbrews with the sweetness or acidity of whatever is in the dish.”

Check out more microbrew cooking tips in the January 2015 issue of Traverse, Northern Michigan’s Magazine. Get your copy here!