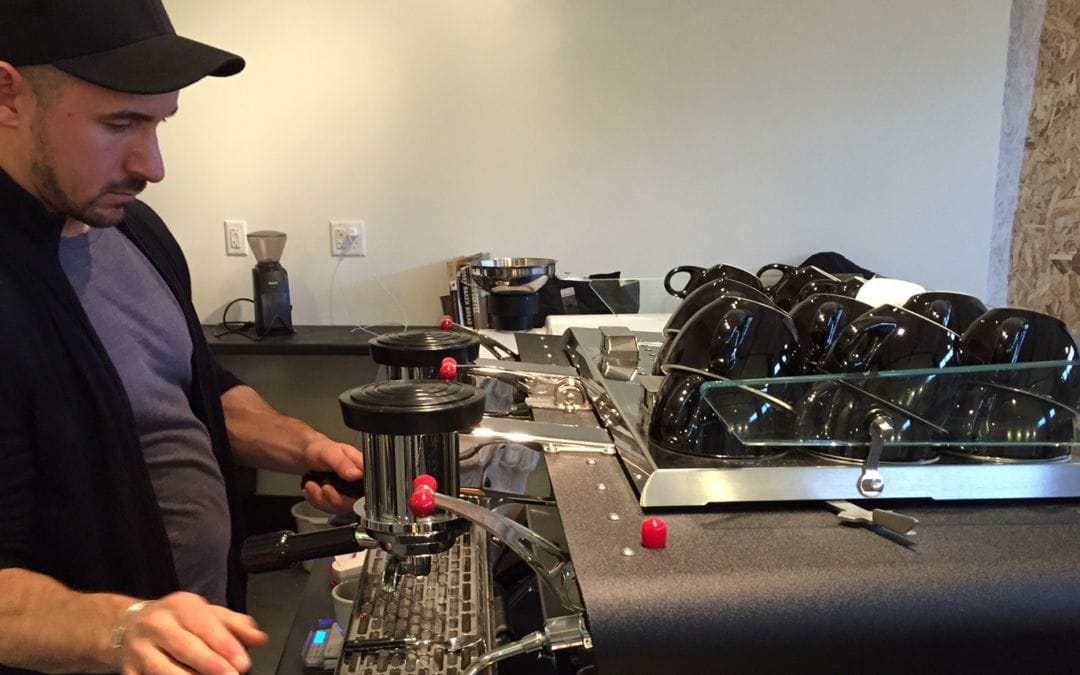 The latest addition to the Traverse City coffee scene, BLK MRKT (Black Market) will open in Traverse City’s Warehouse district in late January. Black Market is a coffee shop and will offer a basic drink menu as well as in season drink specials. Custom orders are encouraged. Although food isn’t currently on the menu it will be available in the summer.

Owner Chuck Korson isn’t new to the world of coffee and openly admits, “I am kind of obsessive about the things I get into and coffee is definitely one of those.”

“As awesome and amazing that my time at Morsels was, there was always that nagging at the back of my head, like’ you’ve worked for other people for your entire life you should try to do your own thing,’” he says.

His own thing is BLK MRKT.

Located next to the main entryway of the Warehouse Market, the minimalistic coffee bar is cleanly designed with an eye catching palette and low counters intended to foster a higher level of interaction between customer and barista. There’s a bar, two tables, counter space and plenty of room for chatting with a friend or those behind the counter.

The entire space has been designed to a “T” by Chuck and he says that’s because it reflects who he is.

“The biggest risk you take as a business owner I feel like is pouring as much as yourself into a business. And this space is me. It is like me splattered all over,” he says.

Chuck acknowledges that, “obviously because of branding choices, a certain demographic will be more attracted to it than others,” but he says he envisions a wide customer base.

“I want people that have traveled all over the world and been in restaurants and coffee shops that are amazing to come in and say ‘cool’ this feels good, like this feels like not what I was expecting in Traverse City. But I also want my grandparents to come in. I want to serve everyone,” he says.

The branding is on the edgier side, with what Chuck calls a “punchy” graphic. And he says he didn’t want coffee to show up in the name to keep the business open to a variety of opportunities.

“Keeping it vague let’s me grow and do other things besides just coffee. Plus people are like ‘what’s that?’ People want to know what it is.”

BLK MRKT is a multi-roaster shop and will offer three different roasters including, Super Sonic Co. in Berkeley, Heart Coffee Roasters in Portland and MadCap out of Grand Rapids. Buying and providing local products is vital to Chuck and knowing where the products he will sell come from is part of his business model.

“I want to use Michigan products and as many people from Michigan who have had their hands in the coffee process,” Chuck says. “There is no local coffee, I don’t care what anyone says, coffee is grown in the tropics. It may be roasted locally but there really isn’t such a thing as local coffee.”

He says that much like wineries and breweries there are a lot of great roasters in Michigan and he wants to work with them, but transparency is important.

As a coffee professional Chuck admits that he is passionate about coffee and can talk about the technical side of coffee for a while, but he stresses that he won’t push that on a customer. “If someone wants to order a basic cup of coffee I am not going to overwhelm them with information,” he says.

When he opens in early January he is prepared and excited to meet customers, long time supporters and for people to check out the space.

“New businesses in Traverse City are very exciting. I want to be busy but I also want to make sure that there is no difference in service from the first day or at least if there is, only a marginal one,” he says.

“I have so many people to be thankful for. I’m thankful for this city being the way that it is, I’ve had so much help and so much enthusiasm from so many people. This is a dream for me and I’ve been wanting to do this for a very long time. I want people to have an awesome experience from the get go.”

Although it isn’t open yet, BLK MRKT is located on the corner of Hall and Garland street in the Warehouse District. There’s parking behind the building and customers can enter by Relish.