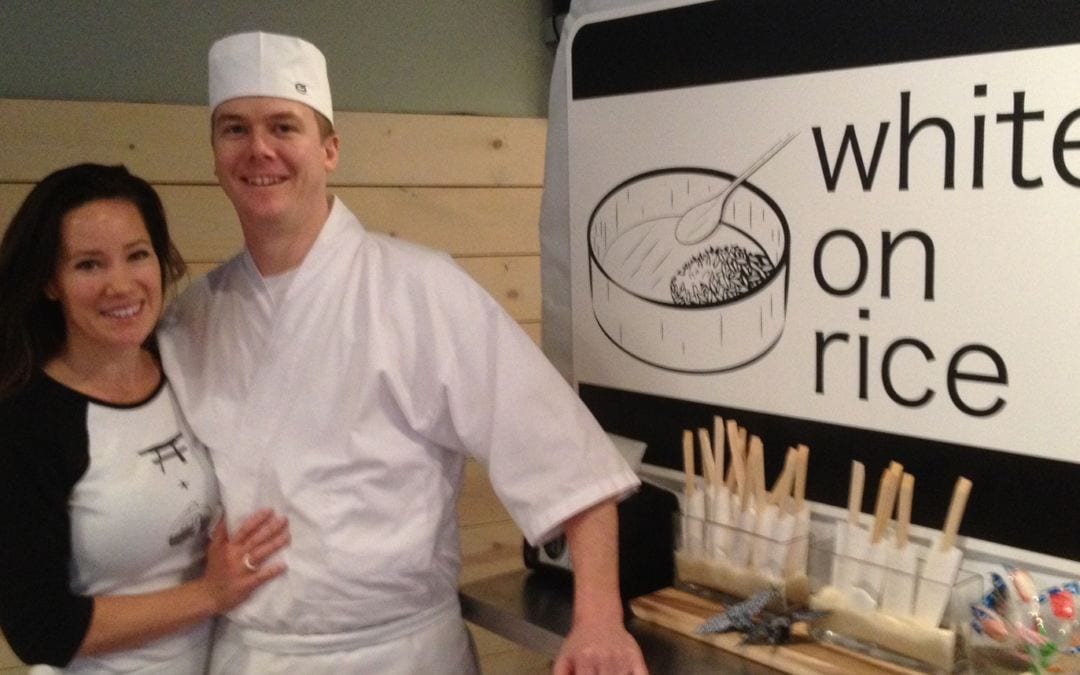 After years in the food industry, husband and wife team Eric and Amy Kolden wanted to bring their passion for Japanese food to the Traverse City food scene. For the entire month of December their truck, White on Rice, is the LTO (limited time offer) pop up food truck inside the Little Fleet in downtown Traverse City.

The name comes from the saying “white on rice” and is a whimsical way to introduce Traverse City to sushi and beyond. The name was the result of multiple brainstorming sessions and “is perfect because the two of us go together like white on rice,” Eric says.

Right now because White on Rice is a food truck and not a brick and mortar, the main focus for Chef Eric and Amy is to bring classic and delicious sushi rolls to the Traverse City food scene. Eric is passionate about every aspect of the food, and prides himself on the care he takes with rice production, which is in itself a craft. Eric creates what he considers to be “standard sushi” and that means simple is better.

Eric has been rolling spicy tuna rolls and beyond for more than a decade now, after coming home from Cincinnati one summer and discovering his passion for sushi at 310 (now Firefly) in Traverse City.

“I had seen the real deal sushi bar [at 310] and I was like, ‘that’s exactly where I want to go.’ As soon as the summer was over I went back down to Cincinnati and I had seen a posting for a position at a Japanese restaurant so I went in, applied and I got it.”

For the next two years Eric trained as a sushi apprentice, starting out as a roller and working his way up to the sushi bar.

“There I was on the sushi bar rolling California rolls for the first time, so scared I was going to have to talk to somebody and so scared I was going to cut myself,” he says. “And then all the sudden it became second nature, my coworkers grew to understand what I was after and they nicknamed me “the machine” because I could roll like a machine. Just pump out the rolls, one after another.”

After two years in Cincinnati, Eric returned to his hometown looking for a place to apply his newly developed skills and started working at Red Ginger. Shortly after the restaurant’s soft opening Eric was hired on as the sushi chef at Red Ginger where he worked for seven years. Now, he says, the time has come to do his own thing, which in this case comes in the form of a food truck.

Although White on Rice will be in the Little Fleet only for the month of December, Eric and Amy are planning on having a truck in the lot for summer 2015 and from there they are looking towards a brick and mortar establishment. Not only is the food truck a good way to get exposure, it also provides an opportunity for people to get comfortable with sushi.

“I think a food truck makes it a little more approachable for people because the accessibility of sushi needs to be there,” Eric says. “I am just saying get your hands dirty a little bit with the sushi, get into it. Don’t be so afraid or intimidated.”

For now White on Rice only offers sushi rolls, but with creative twists, like taking a salad and making it into a roll. He and Amy are also offering “Izakaya” which translates to “Japanese pub.” Japanese pub style dining and food is what Eric calls “the future” of dining.

Izakaya usually offers pub style food like deep fried shrimp balls, onigiri’s, yakitori, tempura and octopus balls all in addition to sushi. Eric wants to take the ideas from a Japanese pub and apply them to sushi.

The husband and wife team created White on Rice and run it together, but they’ve also received support from the restaurant community. Simon Joseph at Harvest, Jen Blaskeslee and Eric Patterson of the Cooks’ House and Short’s Brewing have all reached out to express welcome and gratitude for White on Rice opening.

“Most important the community’s response has been so supportive,” Amy says. “Patrons, other chefs, and business owners have offered to help to make White on Rice a permanent fixture in the Traverse City dining scene.”

“The idea is that we want people to eat affordably, eat well and then learn,” Eric says.

Visit White on Rice in the Little Fleet in downtown Traverse City for the month of December. They are open every day for lunch and dinner. For hours and the menu check their Facebook page. Keep an eye out for White on Rice in summer 2015.