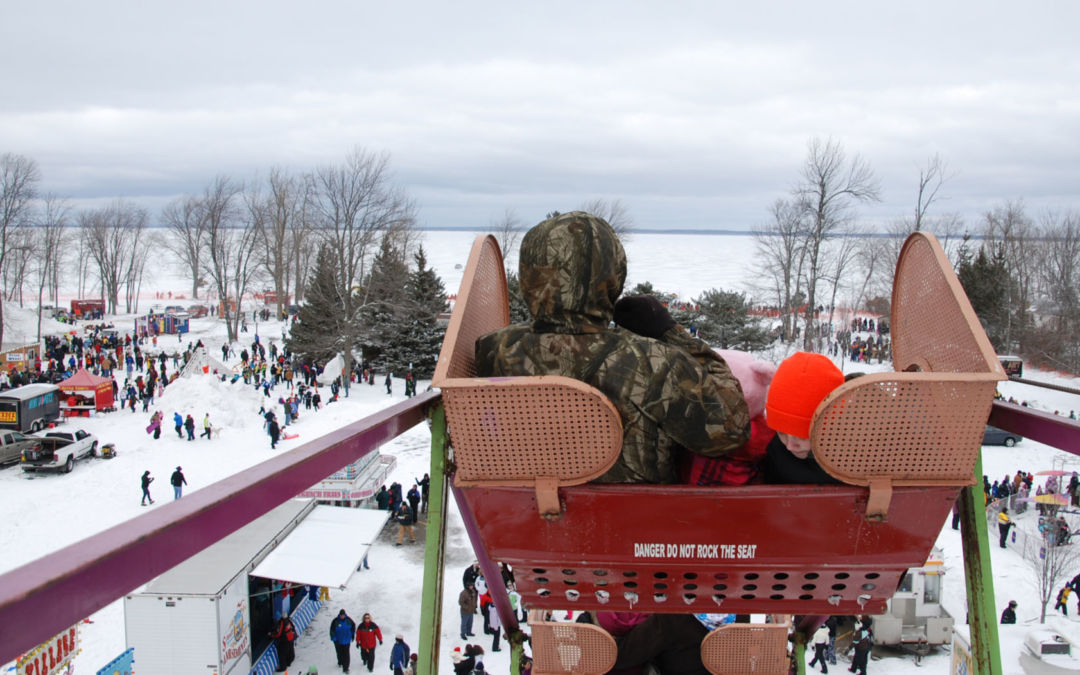 Celebrate winter in Northern Michigan and enjoy a variety of winter festivals from Petoskey to Houghton Lake! The list below gives a round up of some of the biggest winter festivals around.

Tip Up Town in Houghton Lake

Now in its 65th year, Houghton Lake’s yearly winter fest remains a beloved tradition that takes place the last two weekends in January—January 16–18 and January 23–25, 2015—Tip Up Town promises “family fun for all.” Carnival rides, family entertainment tent, stage games, pony rides, family skate night and a fishing contest are just some of the activities offered. Join thousands of winter lovers from Michigan, Ohio, Indiana and Illinois who return each year to see what organizers call the largest winter festival in the state. 800.248.5253, 989.366.5644, houghtonlakechamber.net.

A change in venue—to the all-new Cherry Grove Event Center in Cadillac—“is the most exciting change” for the 31st annual North American Snow Festival, says Gabby Chapman, one of the event’s organizers. The festival takes place Feb. 5–7, 2015. Also expect a craft beer tasting night and weekend activities for little ones. (In the past children’s events mostly took place on one night only.) Return events: speed fishing and ice fishing tournaments; kids snowmobile races; lake races; and a Vegas night. The new festival location is along the area’s 200 miles of groomed snowmobile trails for easy access. 800.22.LAKES or 231.775.0657.

For more than half a century this U.P. harbor in the Les Cheneaux Archipelago has put on Snowsfest, an event offering everything from a chili cook-off and ice golf tournament on frozen Hessel Bay, to kids games, cardboard sled race and Winter Wonderland Dog Walk. This season’s festival is slated for February 12–15, 2015, and to commemorate Valentine’s Day will feature a “Love is in the Air” theme. A pub crawl and Frosty 5K also are part of the line-up. lescheneaux.org.

Now in its 17th year, this wintry girlfriend gathering is moving to The Village at Grand Traverse Commons. Break a sweat while snowshoeing or cross-country skiing, then head indoors for wine tasting and delicious food. The Tour, proceeds of which benefit numerous nonprofits, remains a women’s tradition held the same day as the Super Bowl.

The sixth installment of this suds and snow event is set for March 14, 2015, at Boyne Highlands Resort and features 240 brews from across the country. Enjoy grilled brats and live music by The Galactic Sherpas. Admission is free and tickets are available for purchase to sample beers (four-ounce pours). Following the outdoor fun, live music continues in the resort’s Zoo Bar. boyne.com 800-GO-BOYNE.

Celebrate World Snow Day on January 11, 2015, at Crystal with special activities and clinics “designed to introduce a new generation to skiing and snowboarding.” Later in the season: check out Crystal’s annual slush cup March 14 and the resort’s St. Patrick’s Day celebration March 17. 800.968.4676, crystalmountain.com.

While a handful of participants in the Bigfoot Snowshoe Race are serious racers—the event is the Midwest qualifier for the national championship snowshoe race—most entrants are all about having a good time. The event takes place Jan. 17, 2015, at Timber Ridge RV & Recreation Resort on the east side of Traverse City. Sign on for either the 5K or 10K—both are fairly hilly and keep participants on their toes (literally) with the possibility of log-jumping and tree branch-dodging. Bring your trail shoes if there’s no snow—the race goes on no matter the conditions. Snowshoe rental available.

Keep an eye on the MyNorth Community Calendar for more Northern Michigan Events!