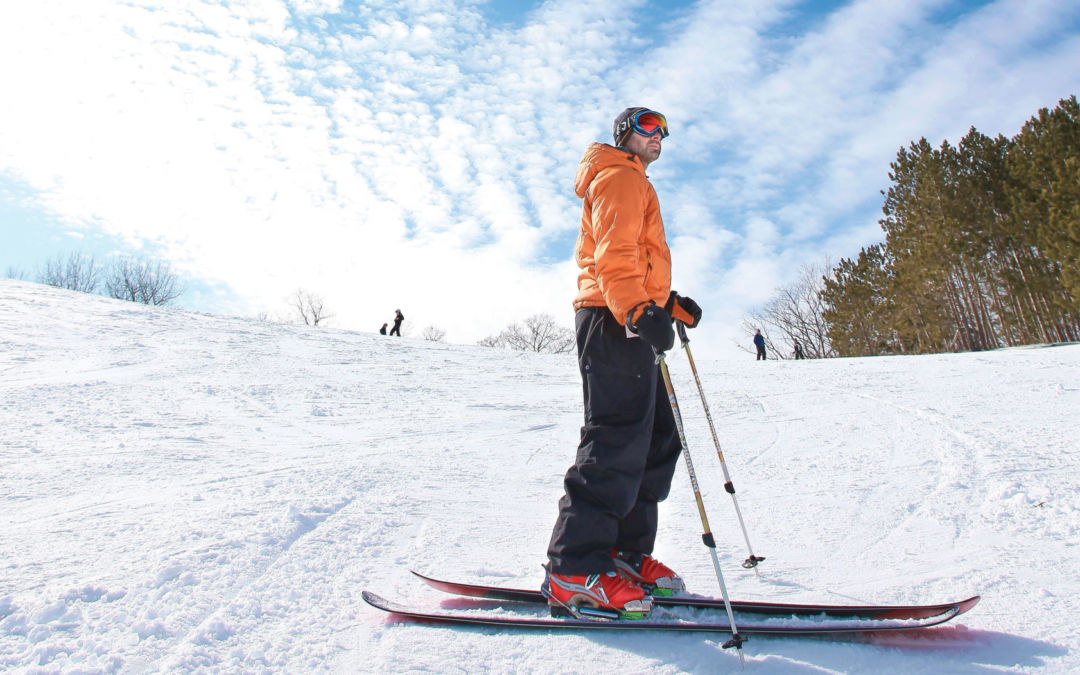 This feature about Shaggy’s Skis was originally published in the December 2014 issue of Traverse, Northern Michigan’s Magazine.

During a quiet Thursday night in February, Andrew Maguire and I drive north toward the small town of Boyne City, Michigan.

Tomorrow morning we’ll visit the factory for Shaggy’s Copper Country Skis and then test a pair of skis on Boyne Mountain, Lower Michigan’s biggest ski area.
Two hours into the drive, Andrew and I talk of the noise and clutter of Grand Rapids, our city of 188,000. He talks of the suburbs metastasizing around Grand Rapids that add another 600,000 people to our metropolitan area until we are just paved roads and sidewalks and houses hemmed in by other houses.

I grew up in a town of 6,000, went to college in a town of 6,000 people, but now I live in Grand Rapids. I think about how, after a few long weeks spent inside the borders of Grand Rapids, I like it here in the north best. Fleeing the city and its fingers of buildings scratching sky. Here it’s only tires humming on lonely black roads. Only the blackened silhouettes of pines. Only a few scattered homes breaking the dark ring of night. Then long pauses of emptiness and silence.

Since we are skiing (I telemark and Andrew snowboards) together for the first time tomorrow, Andrew asks about my history. I tell him of skiing by age 2. Of being a part of a family that spent every winter weekend on icy East Coast slopes. About a family sleeping in an old RV in ski area parking lots so we could be first on and last off the lift. It was the best childhood.
I talk of moving to Colorado in 1991 to attend Western State College and ski Crested Butte. I talk of 20 years skiing the West and those peaks that rip clouds. I tell stories of backcountrying in New Mexico, Colorado, Utah, Washington, Oregon, Montana, and Idaho.

Then I speak in a quieter voice about moving three years ago to southwestern Michigan, how this will be my first weekend skiing Michigan. How I’ve just never had the desire to ski these small knobs. How I’m spoiled. Andrew has snowboarded out West and in New England. He nods.

We talk during this late and dark winter night until we reach Boyne City, a few miles from Boyne Mountain, a 515-foot-high hill, the resort at the base, and a small gathering of homes and businesses hidden in groves of trees.

In early morning, Andrew and I head to Shaggy’s Copper Country Ski Company. The factory—a converted Knights of Columbus hall—is so discreet we pass it twice. Once we find it, we introduce ourselves. John Thompson, a man in his early 50s with a youthful face, a soul patch goatee and crows’ feet in the corner of his eyes, shakes our hands and walks us through the five-room factory. He tells how he, Shari (his wife of 32 years), and their two sons, Jeff and Jonathon, started making skis. “My youngest son and I built a surfboard. After we did that, Jeff said, ‘Dad, we need to build some skis.’ ” John looks at the machinery in the shop and adds, “We’re a ski family. I was a ski racer and so were my boys. But we had no clue how to build a pair of skis, so Jeff and Jonathon went to skibuilders.com to figure it out.”

John picks up a pair of delaminated skis that lean against the wall. These skis have never been remotely ski-able. “This was our first try,” John laughs. These skis are ruined skis, useless skis. John shrugs and says, “It was disappointing when they turned out like this, but it gave us determination to make a better ski.”

As we travel machine to machine, John walks us through the ski-making process that he and his youngest son, Jeff, who recently graduated from Michigan Tech University in mechanical engineering, use to construct skis. “Jeff and I begin by purchasing wood from Matelski’s Lumber Yard, right down the road.” The wood (beech for a damper, smoother ride and ash for a snappier ride) is cut into slats, which are glued together to create the wood core, which is then trimmed until it is exactly the dimensions the Shaggy’s crew wants. John then walks us through the remaining 45 steps.

In both a literal and figurative way, John is peeling back the layers on something I love. I’ve spent a life on snow. Skis are an extension of my legs. But a pair of skis has always been this thing that I purchase. Here a ski is a hand-built thing, a thing that John and his family have brought into existence. “It’s not all that overwhelming,” John says, as he picks up a half-finished pair. Yet to me this process of building skis is almost magic.

I ask John if he likes designing and making skis. His face breaks into a smile. “I love building them and getting people on them. Then I love having them come back here and say that they loved skiing our Shaggy’s. Or I love skiing somewhere and looking over and seeing someone on a pair of Shaggy’s. That makes it all worth it.”

But the morning is passing fast—it’s already 10 a.m.—so we walk into the showroom. I ask John for his favorite ski. He grabs a pair of the Tubbys and says, “If I only had one ski, this is the ski I’d take. This is my most fun ski. It’s so playful.”

Fifteen minutes later, Andrew and I are on the slopes of Boyne. It only takes a few runs to get the Tubbys to roll edge to edge, and soon Andrew and I have slipped off into the Glades, a wooded run that whispers of the big mountains I skied before moving to Michigan. After only two runs, I’d trade in my skis (a pair of G3s) for these.

By lunchtime, Andrew and I have skied most of Boyne. At the top of the mountain, where we enjoy hamburgers, cold PBRs, and views of farms in the distance, we decide to call it a day. I’m wanting something wilder. But we’re hundreds of miles away from the backcountry terrain I know. Andrew must feel the same because he says, “Remember that abandoned ski area that John told us about when we were at Shaggy’s?”

Yeah, let’s head there, we say, smiling and excited, even if we don’t know exactly what we are searching for other than a feeling in our chests, something different from the knot I feel as I commute through stoplights to my suburban job.

Andrew and I wander back roads outside of Boyne City until, on a road hemmed in tight with trees, we find it. A 500-foot-high ski area. Long overgrown. We barely break into a smile before we realize that every tree and fencepost is littered with No Trespassing signs. We shake our heads, wonder if we should call it quits, return the skis to John.

But this is where we want to ski—this unruly ski area—so we knock on the doors of a few nearby homes. No answers. Just the silence of wind through pines, a silence of failure. We’re not ready for failure, so we return to one of the houses. I knock and knock until a dog howls, and then a husband and wife greet us at the door. I tell them the story of Shaggy’s handcrafted skis and of wanting to backcountry ski in Michigan on these things of magic. I tell them whatever they need to hear so that I can ski their land.

They smile and let us trespass.

I throw my Shaggy’s over my shoulder. Andrew cradles his Lib Tech snowboard. We boot-pack up a thin and steep tangle of a run. As I kick steps into the sunbaked snow, I am transported to 1991 when my brother Jay and I boot-packed outside of Crested Butte. It was my first backcountry experience, and I had just moved to Colorado from Pennsylvania. I was so new to backcountry skiing that I didn’t have a beacon, a shovel, skins, or even the knowledge that I should have had those things. I was learning a new way to live, just like I’m now learning a new way to ski in Michigan—by hiking this abandoned ski area.

My brother and I, we trudged up a thousand vertical feet—my lungs burning from the high elevations—before we skied back down. In the 21 years since, I’ve given up boot-packing and now use skins when I backcountry. Today I return to my roots. This boot-packing is coming home.

At the top of this knoll, Andrew and I gaze to where the sky begins to lose its blue. Other knolls to the east give the earth a slight wave—topography, places to hide. Hidden in the subtle valleys are farm fields that remind me of my hometown. This land is so much more complex and natural than the uniform city we live in, a place of houses ringing houses ringing a small urban area.

Atop this small knoll, it’s just coyote and rabbit tracks and a thin, narrow chute filled with a foot of heavy powder. I smile. Andrew smiles. We’re—in some loose sense of the word—backcountry skiing just three hours north of Grand Rapids. This is why we drove into the night last night.

Andrew looks at the short and overgrown chute and says, “Rip it.”

I point the Tubbys into heavy, untracked snow. The powder is chunky and unforgiving, but the Shaggy’s don’t care about anything other than floating. With snow flying up into my chest, I grin a wild grin of teeth and joy and hop around thin trees re-growing on the slope. This is the best run of the day. This feels exactly like what I am supposed to be doing. Skiing is family.

At the bottom, we laugh and high five and hike up again just to experience these 500 vertical feet one more time before we return to those honking horns and exit ramps. At the top, the sky darkens until it is the last of the light. Andrew snowboards down. I linger on the top because I never want to leave this knoll, because I am completely alone, because I feel a million times less lonely than in the cities. I never want to return to the city way of living. I enjoy this peace a moment longer before I drive the Shaggy’s through slushy snow that sprays, maybe, all the way to our setting sun.

Purchase a pair of Shaggy’s Copper Skis on ShopMyNorth.com!